I’m really not pleased with this episode, which is exactly why it is brilliant. The Walking Dead should make you uncomfortable, and make you upset. This episode isn’t all lollipops and rainbows and sugar and spice. This is starting to get good.

I’m going to avoid spoilers as best as I can. I’m also going to handle this review in the same way I did Sonic the Hedgehog 4: Episode 2, and that is to simply say what’s better and what’s worse than in the first game.

This episode is shorter. I am pleased about this because I get fatigue when playing games. I actually get bored if things tend to drag on. I like shorter episodes because I like to be able to replay them multiple times to see the different things that can be done. You have that freedom with shorter episodes because you’re not dragged through the same content over and over just to see the other outcomes.

I really enjoyed that the voice acting quality has improved considerably. I had no gripes with it before, but it’s even better now. The voice talent are getting into their characters with the more dialogue that they deliver, and everyone’s voices are really beginning to fit the characters in a snug way.

The difficulty of making decisions has increased to the point where I feel uncomfortable about every choice I have to make, whether that choice is cutting off a man’s leg in an attempt to save his life or simply just who should get to eat the sliced apple and who should eat the cookies. 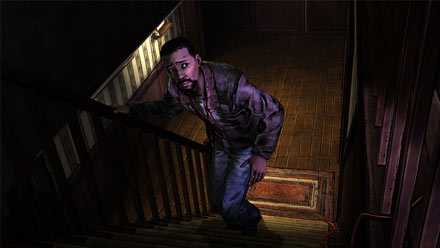 Having to observe the scene with the right-stick is still awkward to do. It would be nice if other control methods are patched in to the game.

When loading Episode 2, The Walking Dead asked me if I wanted to randomize choices from the first episode. The game assumes that you haven’t played an episode, until it loads your save data. It only loads your save data when selecting the episode and launching—meaning that the game assumes you’re starting over from the beginning, only to actually load your last checkpoint afterwards. There is no way, from a glance, to see your progress through any of the episodes.

Due to an upcoming change in the GameCola repertoire, I shall not be reviewing any more episodes of The Walking Dead. This is probably wise, as my heart is not in this game anymore. Even the PC version, which I have been playing in its place, is littered with issues concerning save data and online statistic recovery. You should wait until the whole game is released, and all the issues are fixed, which will likely be early December. 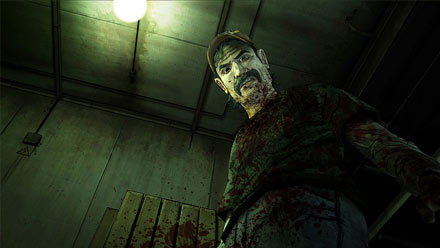