Every few years (or in the case of Capcom, months), the inevitable fighting game sequel comes out. All of the characters that you “know and love” are pitted against each other once again for the sake of entertainment. There is little changed, but the changes that are made are “so great” that they get incorporated into every future installment whether we like it or not.

Soulcalibur is one of the many franchises that continue to chunder over our consoles every few years. But the question is…

Does the soul still burn?

This is Soulcalibur V, the latest in a long line of repetitive titles in the Soul series, which arguably peaked in greatness around the time Link from The Legend of Zelda was hitting Mitsurugi ‘twixt the eyes with the Master Sword.

The V in Soulcalibur V could refer to the number five, although I believe it refers to the V in “VERY SIMILAR to the fourth game.” Instead of Jedi, though, you can play as that guy Ezio from the good Assassin’s Creed games. Yes, he has a name. Sadly, we are still not allowed to create a custom character with the moveset of the cameo character. 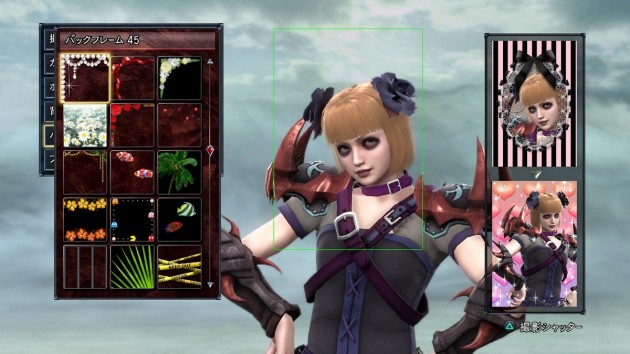 Creation Mode is totally why I bought this game. Duh.

If you’re a single-player fighting game fanatic who doesn’t go much on the versus aspect, then Story Mode is what you came for. It is what I came for, too. The main plotline focuses on the heirs of Sophitia. Why the “heirs”? Well, Sophitia has been murdered by Tira. I find it kind of hard to believe that Sophitia Alexandra could be killed by anyone. Her moves always flowed for me, and she had the benefit of the amazing mythological Greek goddess blood flowing through her veins. It makes as much sense as Harry Mason getting slaughtered in Silent Hill 3.

Anyway, with Sophitia conveniently dead, the story can instead focus on her two children: Patrokolos–

Yes, that really is his name.

–and Pyrrha. Patrokolos is the son, a master of swordplay and a talented and suave gentleman. He obviously retained no traits of his mother’s. On the other hand, his sister Pyrrha inheritied all of Sophitia’s good looks. Unfortunately, Pyrrha is a “malfested,” which is something along the lines of a fake human doll being controlled by the Soul Edge. 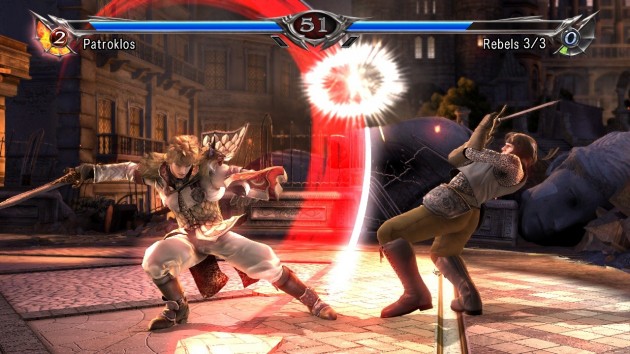 Story Mode is where the stage of history really shines.

Soul Edge is a really powerful sword. It isn’t inherently evil, but it is often sought after to help progress plans of ill intent. To counter balance the Soul Edge, the Soulcalibur was forged, and yada yada yada. It turns out that the only way to cure Pyrrha of her malfestation is to strike her down with the Soulcalibur. The way the dialogue is written, it sounds more like Patrokolos wishes to strike his sister down in her figa. It can be quite uncomfortable to listen to at times.

I was so engrossed in the story and I was paying so much attention. Soulcalibur V wanted to shit all over this, so it decided that the cutscenes would sometimes mute themselves. If you retry any stage in Story Mode, the following sequence will be entirely muted for some reason. I’d like to know whether this will be patched soon, seeing as the game came out in February and has already received patches for the stuff that generates Namco revenue, like DLC and DLC and DLC.

The cutscenes are shown in a really ugly way, with still images that have poor Photoshop filters placed on top of them. No, it isn’t art. It is a mess. There are a few cutscenes that are fully 3D and beautifully shot. If all of the cutscenes were like this, the muting bug wouldn’t ever happen AND the game would have earned a few extra marks here and there. 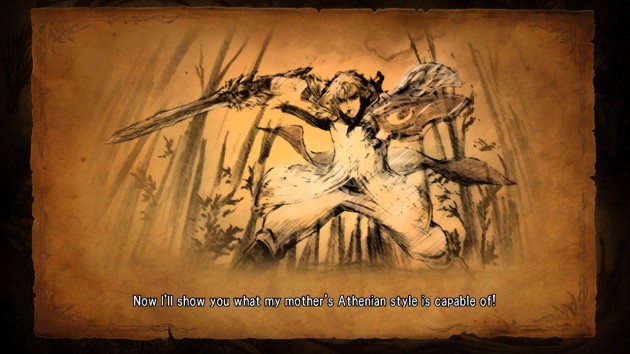 My beautiful eyes hurt! THEY HURT!

More of the same goodness.

I have a penchant for creating things, and that is why the Creation Mode appeals to me. In this mode, you can re-color character equipment, dress up an existing character in entirely different equipment, or create your own character from scratch. This is the most enjoyable section of the game if you like to make stuff in your spare time. There are a lot of options and you can create almost anything. 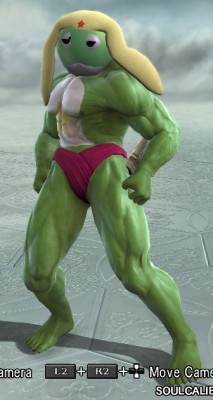 Even Sgt. Frog (created by mephie)

Another thing I really enjoyed was the Quick Battles. You have to fight computer opponents that are tweaked so that they feel like real people. Many of them have their own custom characters and each has a title that you can collect by defeating them. It is very addictive to collect all of these titles. If you have played Broken Destiny, I’m sure you know exactly what I’m referring to when I call the art of collecting titles “habit forming.” 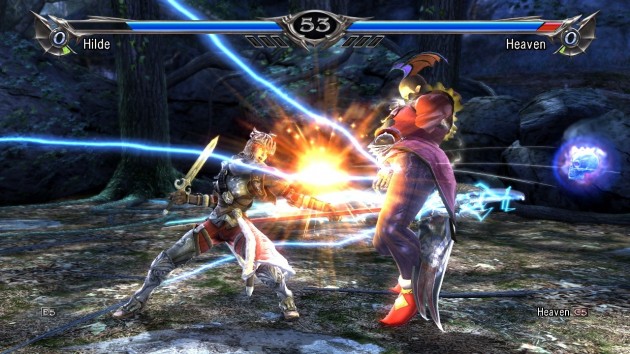 Well, the fighting is really spot on. No flaws. Honest.

I can say that there is nothing particularly wrong with the online functions, which I have had the opportunity to play around with this time. That said, every player I fought completely trounced me. I know that my place is with the single-player modes, forever alone. At least a lot of online players were milling about in their custom creations, and it was exciting to see them all in action.

In short, you’d have been disappointed with this if you’d bought it back in February. It has never been worth the full $60 asking price. I’ve got to be brutally honest. Nearer $20 you can imagine that the game is a high-end Live Arcade title, and it suddenly becomes a much better game as a result of that mentality. I managed to get the game cheap enough that buying the pre-order bonus from eBay still worked out fair.

For a small sum, Soulcalibur V is an excellent fighting game that you should add to your collection if you’re into it. But if your retailer wants to rip you off over this, forget it. Avoid Soulcalibur V like the plague and grab a goodie like Tekken 6 or Dead or Alive 4 instead if you haven’t already.

A game that was ahead of its time, both in content and the use of the -naut suffix in the name.