Firing up my old, dusty Sega Saturn brings back so many wonderful memories of staying up all night playing games with my friends and truly feeling the “next generation” experience that my piece of shit Atari Jaguar could never provide. Seriously, fuck you Atari, and your shitty console. God that system just sucked so hard.

So. Anyway. Three Dirty Dwarves for the Saturn, created by Appaloosa Interactive, a terrible, terrible company whose most notable output was all the Ecco the Dolphin games up to the Dreamcast one and the gloriously insane Jaws Unleashed. Let me tell you something, you goddamn Ecco sympathizers out there, that game fucking blows. All of them. They’re tedious, confusing and frustratingly hard. They screwed up Contra too, twice, on the PlayStation with C: The Contra Adventure and Contra: Legacy of War. C’mon, you remember those overhead camera piles of shit. I know you do. This was those guys.

Oh, right! I wasn’t picking on those games; I was picking on this one. I really remembered loving this game back in the day. I remembered it as a great side-by-side game, where you’re sitting next to your friend on the couch drinking beer and just generally having a blast. But playing it this time, with my friend Adam along for the horrible ride, my memories came crashing down.

Forget the stupid storyline in this game; it’s all about nerds playing D&D and getting kidnapped, and their characters (the dwarves) come to earth to save them. The game plays like the bastard step-child of the much better Guardian Heroes and TMNT arcade game. It’s a left-to-right brawler, with short and long attacks and special moves assigned to the top three buttons. It looks fucking great—I mean it, the graphics are spectacular. Much like with Ecco before them, it’s the gameplay and design that really lets this one down.

The characters are pretty cool, and you’ll immediately settle on a favorite. I don’t know their stupid names and I don’t care, but mine was the dwarf wearing a football helmet, whose melee was swiping with a bowling pin and long-distance attack was rolling a bowling ball that thundered through everything in its path. My buddy Adam preferred the one who simply held a pump-action sawed-off shotgun. Nobody wanted to play as the dipshit dwarf with the baseball bat. His long range required you to toss your baseball in the air and then hit the button again at exactly the right moment or you missed. Bullshit. 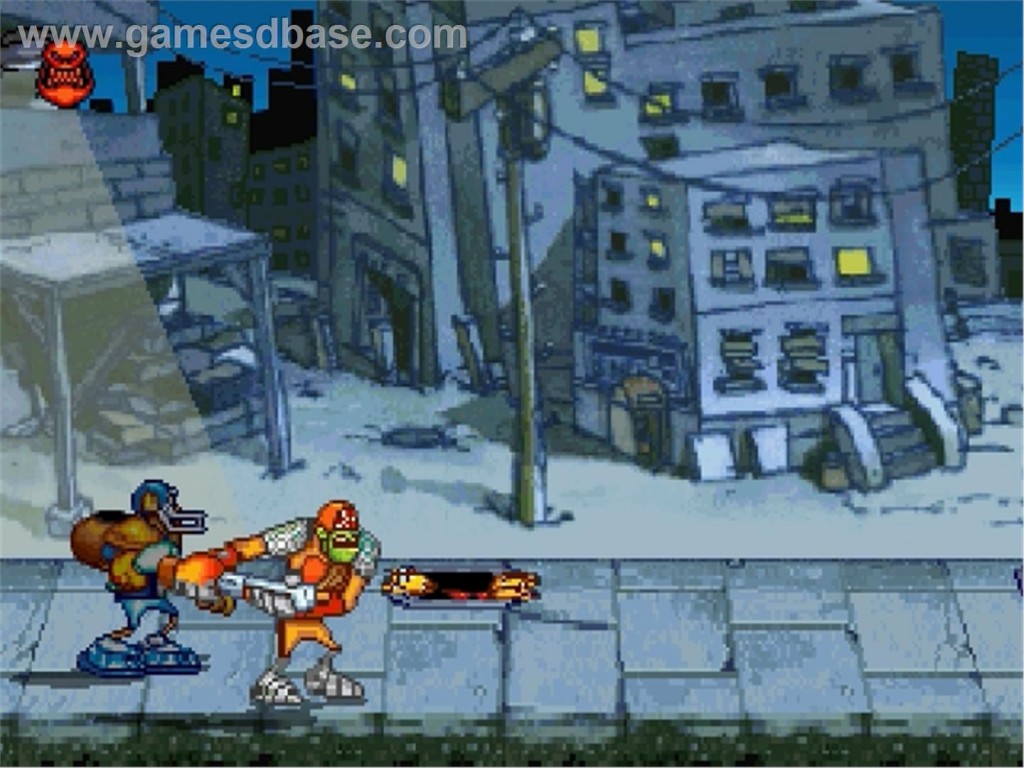 We hunt the night, wielding only our trusty sawed-off and bowling equipment.
You suck, Appaloosa! I’m glad you’re bankrupt, you shitty game company!

The primary problem with this game is thus: All three dwarves are onscreen at the same time. Get hit once by ANYTHING at all and you’re knocked unconscious. At this point, another dwarf has to hit you to wake you up or you have to rock back and forth like a mad-man on the d-pad to wake him up yourself. You can also switch to a different dwarf that isn’t being used by the other player by tapping the L or R buttons. There is no health meter, and if all three get knocked unconscious at the same time it is game over, baby. It gets so goddamn confusing when you’re in a boss battle and your dwarf gets knocked out and you’re madly pushing left and right so fast that you’ve got carpal tunnel and your thumb has just caught fire, and you realize the computer has switched you to the other dwarf, so really your onscreen character is just facing leftrightleftrightleftright over and over again just doing that weird Charlie Brown dance. Jesus FUCKING Christ!  And to top off this lovely play mechanic, it doesn’t matter if you’re one hit away from finishing the boss, because there are no mid-level check points. If all three get knocked out, it’s allllll the way back to the beginning of the level. Awesome. We got so fucking frustrated that we just flung the controllers in disgust after our 25th try at stage five. 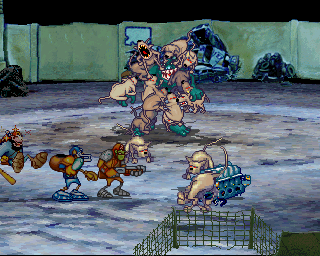 Am I lying about those awesome graphics?
Too bad they’re attached to this broken bitch of a game.

And it’s honestly a shame, because the rest of this game held promise. It held the lofty promise of being Appaloosa Interactive’s only—and I mean ONLY—good game. The sprite animations of the dwarves, the enemies and the chaos in the background is just fantastic. It’s boldly drawn, bright and colorful. The boss battles can be very imaginative as well, the first one taking place in an arena type setting. You’re actually moving around the boss in a circular pattern while he stays put. He’s got rabid dogs crawling all over him and they scale in and out as they scamper over his body and then fly off to attack you. Cool stuff, man. And there’s tons of clever little touches. In one level, there’s a huge, four-armed man standing by a lamp post and a little old lady behind him. Every time you attack, he grabs you and wraps you up into a ball with his arms, then flings you away. The trick is to hit him just right, and while it doesn’t damage him, it pushed him back a little. Get him to bump the old lady, and she beats him with her umbrella. Clever. And like I mentioned before, the animations are a joy to watch, so many frames in each of the characters. The Dump level in particular has machinery gnashing away, and enemies with intricate metal contraptions and weapons strapped all over their bodies.

Well, there’s not too much more to say. Thanks again for taking a huge shit on my good memories of your games, Sega Saturn. This game is what I like to call an “If only…” If only a better development house had had these artists to make a game with. If only they had improved the play mechanics and put in checkpoints. If only Appaloosa (I hope you’re rotting in hell, you shitty company) hadn’t made every one of their games a one-upper of awfulness over the game before it. If only… Three Dirty Dwarves, if only.