Spirit Camera: The Cursed Memoir has you wandering around in the real world, 3DS stretched out in front of you like a P.K.E. meter, stalking out the darkest corners of your actual house in order to seek out and destroy the spirits that lurk within. It’s a spin-off of a last-gen series called Fatal Frame, and its story has two major plot points:

1) The woman in black pulls people into her magical diary, and

2) If they try to leave, she destroys their faces.

You find this diary—an actual, physical diary that comes bundled with the game—and, like a dope, you start taking pictures of it with your Gamera Obscura…sorry, Camera Obscura, until you get sucked into its world. 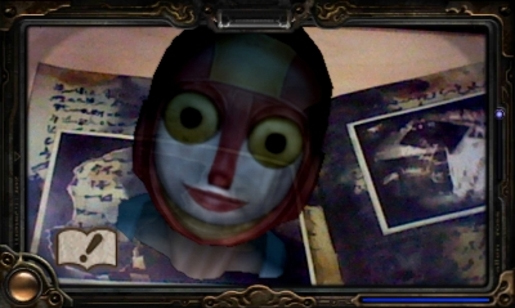 Spirit Camera has two major gameplay elements: leafing through the diary, and busting the ghosts. The diary “puzzles” should only be referred to just like that, with air quotes and everything. Each one essentially boils down to: Turn to the next page in the diary. A-hah, you’ve done it! The game asks you to find a specific page in the diary, but that page is almost always (very conveniently) whatever page happens to be next. It’s about as challenging as reading along with the audio-cassette version of a children’s story.

“Finding” the correct page often leads to a specific interaction with the diary—sometimes you have to point the 3DS at a specific part of the page; other times, a goddamn demon hand will jump right out of the book and try to grab you. One of my favorites had me essentially using the 3DS and diary as a Ouija board to spell out a secret message from a deceased little boy I was trying to locate. The board spelled out “be,” “hi,” and then “nd” before coming to a sudden stop.

“Behind? What does that mean?” asks your ghost partner-in-crime, a waifish creature named Maya.

Then you have to turn around, in real life, and…he’s there. A dead little boy, wearing a creepy-ass mask (to keep the lady in black from stealing his face). Another time I had to switch to the “darkness” camera lens and seek out the darkest place in my home. I did so, and I found some evil demon spirits lurking under the dirty dishes in my sink. I swear to God a demon even crawled into my f***ing microwave at one point; it’s bananas. 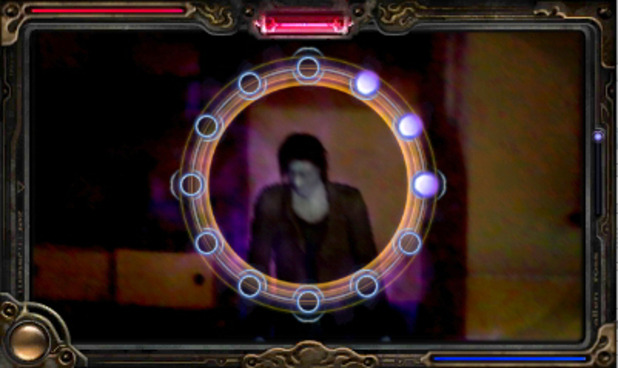 A lot of the diary puzzles lead directly into combat with the spirits within the diary, this of course being the game’s primary hook. A ghost appears in your kitchen/bedroom/airport terminal, and you have to run around like a crazy person taking pictures of them, because I guess that’s how you defeat ghosts. Take pictures when they’re closer to you or when they’re about to take a shot at you in order to inflict the most damage. Theoretically, you’re supposed to actually walk around your house while doing this, but I found the game was just as effective spinning around in my office chair (although at that point it wasn’t just the 3D effects that made me want to throw up).

There were many points where the game was ineffective, though, such as: any time the sun wasn’t shining. This presents a bit of a problem for people who work during the day and don’t want to spend their lunch hour popping into people’s cubicles saying “Sorry Arthur, I found a dead guy in your keyboard; just gimme a sec.” I found myself having to squeeze in time right before dinner, or during the weekend when I’d rather be doing something much more exciting than playing videogames, such as visiting yardsales. I tend to view games as a cooling-down activity that I muck around with for a half-hour or an hour before going to bed; but since the game’s camera doesn’t function properly without perfect light, I had to upend my schedule just to play it. 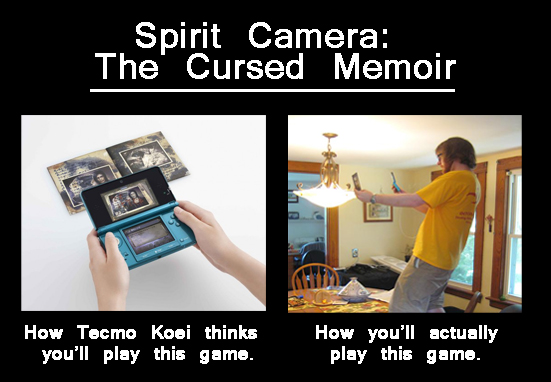 Spirit Camera also doesn’t have any kind of save-anywhere functionality—which, again, is a problem for a game that requires that you play it only at very specific times of the day. “Oh, you wanted to finish this chapter so you could save your progress? Too bad, it’s dusk now.”

The stress of hoping the game will let you save soon so you can be released of your bonds and get back to work, plus the annoyance of having to find the exact right lighting conditions to actually get it to work, limit the game’s creepiness and really take you out of the experience; which is a shame, because there’s so much there to pull you into it. The sound effects, for example—I don’t know how they did this, but even when I was wearing headphones it sounded like the ghostly wails were being projected from other parts of my apartment, like a ventriloquist throwing his voice.

What’s more, augmented-reality games like this offer a level of immersion that you can’t get with other titles. Maya, for example—in any other game, she’d just be some NPC I was talking to. In Spirit Camera, she was a friend, trying to work out her (un)life’s problems together with me in my kitchen. She particularly loved hanging out in the light of the window overlooking my wife’s garden; you just can’t get that in other games. 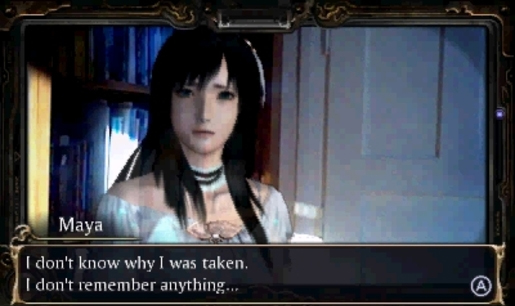 The game’s worth playing—and it’s certainly better than the similarly themed 3DS game The Hidden, whose main hook is also its primary downfall. (In that game, you have to visit specific locations in order to bust ghosts. For example, I once played the game on a trip to California. Now I’m back home on the East Coast, and the game’s not letting me progress until I visit that specific California hotel room again in order to clear out the spirits.) But the technical limitations of the 3DS camera, not to mention the kiiiiinda dull and repetitive story and the game’s only four-hour campaign length, keep it from achieving any real heights.

…on the plus side, though, the game didn’t (SPOILER!) actually destroy my face.

I have a confession to make: I am officially a casual gamer. Sure, there were definite warning signs. I only bought three new videogames last year, two of which had the words "Nancy Drew" in the title