I’ve expressed my love for Project DIVA before. I’ve said it’s “as fun as pressing buttons in time with music could ever be”, and with good reason, because it is. It’s taken several long grueling years, but this rhythm action series has finally broken out of Japan. Available worldwide, Project DIVA F is the latest installment, and it’s damn fine.

The premise is the same as it always is in rhythm games. Button impressions appear on screen, and you are tasked with pressing those buttons at the right moment. Play well, and you might clear the song with your dignity intact. Do poorly and you’ll either get a “Lousy” rank, or drop out entirely. There’s no shame in dropping out on a hard song, besides the eternal shame that will befall upon you and your family.

Each song is sung by at least one of the Vocaloid characters, and they’re mostly songs you won’t recognize (well, I certainly didn’t recognize that many of them).

The Nyan Cat song, “Nyanyanyanya” is included, which you’ve probably heard of if you’ve so much as sniffed the Internet over the past few years, but that’s about it in terms of memorable songs. The main theme to Black Rock Shooter will be familiar to fans of the series, but I doubt anybody actually will care about the song selection.

Of the 32 tracks included in the game, there certainly are weak ones. Songs that could easily have been replaced with better songs from the previous games in the series, for sure. But they’re certainly not bad songs, and the selection is diverse enough to please me. There’s break-beat, rock, metal and even Euro-pop styled tracks, all accompanied with interesting background movies.

These movies can certainly be distracting. In a game where button prompts come fast and thick, sometimes the well detailed and intricate movies can draw the attention away from what is ultimately important—the buttons that have got to be pressed. After completing a song, its video can be watched alone, so you can see what you missed out on the first time around. 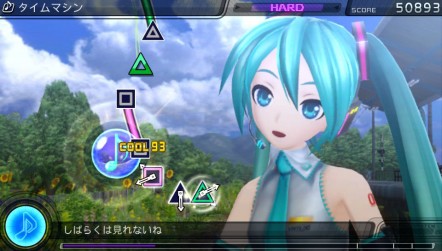 I haven’t reviewed a Project DIVA game since the very first one, so I’ll go over the features introduced in the other games. Firstly, held notes add a new rhythmic quality to the button presses, minimizing the amount of awkward double and triple presses featured in the first game. The star symbols, activated by flicking the analog stick, are awkward and inaccurate at first but I felt I got used to them pretty quickly.

Rhythm Game Items allow the player to make the song easier or harder, like the book item I described in Project DIVA spin-off, K-On! Houkago Live!!. It incorporates features for both the adept and beginner players, allowing everyone to enter at their ideal difficulty level and then strive to improve.

Among other features, the pointless room customization returns. If you like patting robots on the head and feeding them sushi, then go ahead. Nobody is going to judge you. Who am I kidding? Everyone will judge you.

On the plus side, these features are much easier to understand now that the game is in a language I can understand. The Edit Mode is now a hundred times more appealing to me because full English instructions are on hand. Now, with Network Features enabled, you can download Edit Data directly to your console from the Project DIVA F community, paying tribute to and further improving a feature I really appreciated from the first game.

With clothing modules to unlock, gift items to purchase and house modifications to install, Project DIVA F has a large amount of replay value for the rhythm action game fans and supporters of quality Japanese software. If, further down the line, Downloadable Content provides me with my favorite songs from the previous games, then I see no reason not to recommend this game to every fan of Hatsune Miku and Vocaloid based music. 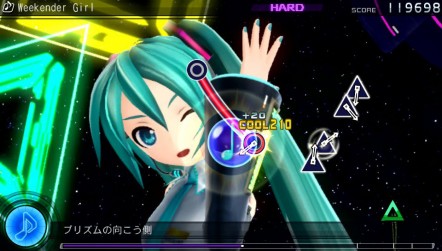 Those of you who have had the pleasure of meeting my husband Mike, either in person or via one of GameCola's famous podcasts, have probably figured out by now that he is a bit of a talker. These days,