Whenever I get an e-mail from Paul Franzen, GameCola’s Editor-in-Chief, it’s usually either a request for someone to review an iOS game, or a message touting some new type of beard shampoo. Normally, I promptly delete these missives, as I neither have nor ever plan to have any type of iOS product or beard. However, when I finally saw a request to review a game for the PC, called A Walk in the Dark by Flying Turtle Software, I was intrigued, especially when I noticed that the main playable character is a cat. Specifically, it is a little black cat named Bast, who goes on an adventure to save a girl named Arielle. At that point, I was pretty much sold, and absolutely not because I have a little adventurous black cat of my own who I’m absolutely crazy about. 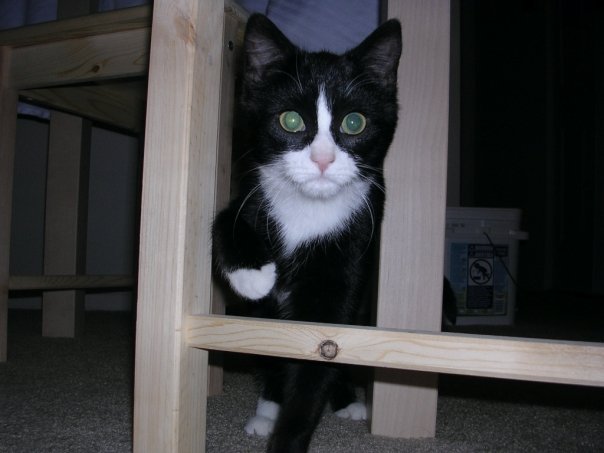 Yep, nothing at all to do with this adorable little ragamuffin.

At first glance, A Walk in the Dark seems somewhat reminiscent of Limbo, as it features a 2D platform style where the foreground, characters, and other objects the player can interact with appear as black silhouettes against a vivid background. The creators describe the game as “a story-driven platformer set in a dark fantasy world,” which again sounds a lot like the aforementioned piece from PlayDead Studios. The gameplay mechanics, however, more closely resemble action platformers such as Super Meat Boy or VVVVVV. In fact, while the eerily beautiful visual and musical styles of the game serve to draw the player in, the real hook of this game comes from its easy-to-learn, yet devilishly tricky, platforming and running gameplay.

There are three types of stages in A Walk in the Dark: platform levels, running levels, and gravity levels. The platform levels cast the player as Bast, who must use his feline agility to scramble up walls, navigate hazards, and avoid enemies. “Running” levels see Bast running forward at a steady pace, and the player must use the jump button to switch between the floor and the ceiling in order to avoid traps. Finally, the gravity levels switch the playable character to Arielle as she journeys through a steampunk spirit world. In these levels, pressing the jump button causes gravity to reverse. In all these stages, contact with a hazard or enemy will cause the character to evaporate into a puff of smoke, only to reappear back at the beginning of the stage. The main task in each level is to smoothly traverse the stage while gracefully dodging each enemy and obstacle. Additionally, each stage features a time challenge and a collectable challenge to test those daring enough to really reach for the brass ring. I found these challenges to be fun and reasonable in their demands (though I never did manage to figure out how to complete all the challenges in the “running” stages). 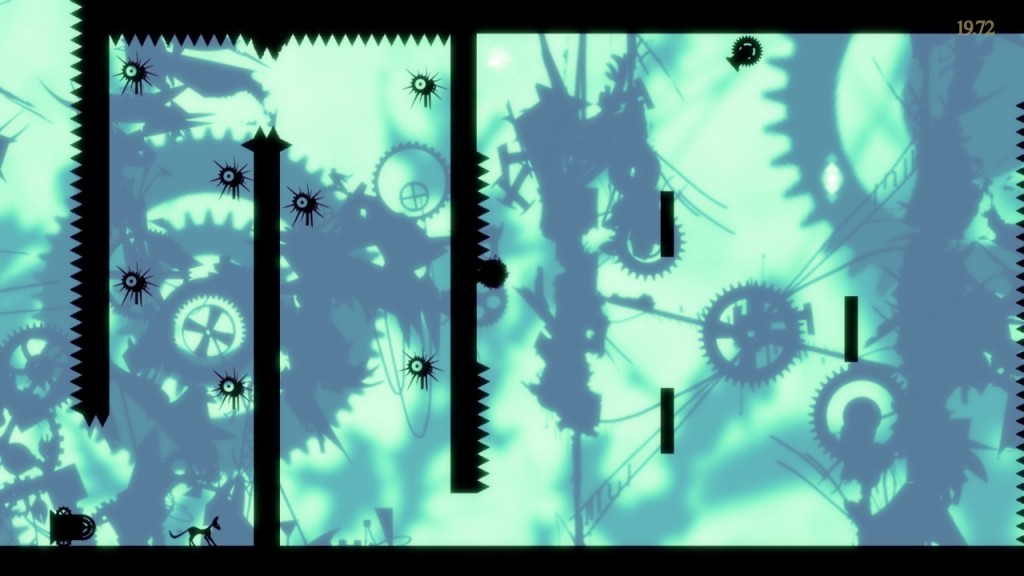 Yeah…have fun with this one.

The presentation of the game also really impressed me. The visual style is simple yet elegant, with finely-placed details that make the scenery come alive. Hazards and enemies are appropriately dangerous or vicious-looking, while platforms, pits, and other environmental features are clearly marked and easily identifiable. The backgrounds consist of a variety of beautifully rendered landscapes, from dusky forests to a dilapidated house to the clockwork netherworld. The soundtrack, a collection of ephemeral piano pieces by Cody Cook, complements the visual style well by emphasizing the fantastical nature of the setting. In addition, the wistful, almost melancholy melodies do much to express the sense of loneliness and loss Bast must be experiencing as he searches for his lost loved one. Overall, the presentation provides a very calming counterpoint to the frenetic action of the game, a trait I found that helped me play for long periods at a time.

While I found the gameplay and presentation of A Walk in the Dark delightful, I must say I was rather disappointed to find that the designer’s claim of the game being “story driven” was somewhat lacking. The opening cinematic shows Arielle being whisked away by skeletal, ram-headed spectre, with the game reflecting Bast’s pursuit of his friend. The story, however, is never developed beyond this. The antagonistic entity from the opening never reappears during the game, nor does the player ever receive any explanation as to what it was or why it stole Arielle away. Nor do we really learn anything about the world Bast and Arielle are a part of, leaving the player to guess at the origins of the old house and the spirit worlds the player must trek through. Perhaps there were symbolic elements to the story that explained these things; but if there were, they were certainly lost on me.

Regrettably, I also noticed a few bugs in my playthrough. When there is near miss upon falling or jumping onto a platform, Arielle or Bast will sometimes hang there for a moment before falling or being able to walk normally. It was not usually a huge deal, but it could become frustrating while attempting the time challenges. I also noticed a few of the timed challenge “par times” were off, resulting in either the player being rewarded for making a time that was above par or not being rewarded despite making par. None of these are game-breaking issues, but hopefully they’ll be fixed at some point.

Despite its over ambitious claims regarding its story and a few bugs here and there, I still found A Walk in the Dark to be incredibly enjoyable. The presentation and gameplay are very well done, and I found myself playing for an hour and a half before I looked up and realized how much time had passed. I’d say there’s easily four to six hours’ worth of play time in there, more if you want to challenge yourself with the extras (I clocked in at around eight hours). Also, you play as a kitty; and as someone who has heard of the Internet, you already know how awesome kitties are, so definitely check out A Walk in the Dark.

Despite the rumors, we do still have fans!