Welcome to “The Ten Reasons,” where I have to come up with ten reasons why I like or dislike a particular game…or else. Like others who have done this column in the past, I am not Michael Gray.

The Clash at Demonhead is a fictional rock group whose lead singer is Canadian, and which later went on to sideline in a popular graphic novel series about a boy who refuses to stop bitching about his life and plays in a shitty garage band. But that’s another story. Right now we’re talking about the Vic Tokai game released for the NES in the early ’90s.

Clash at Demonhead (the game) starts with a small cutscene on a beach. You play as Billy “Big Bang” Blitz, but your girlfriend next to you just calls you “Bang.” He’s a badass in a leather outfit with knee-high boots. His hair is so metal, it exerts a magnetic pull. If you can’t get pumped playing a character like this, then you have no soul.

Bang is called in to find Professor Plum and eventually stop the Doomsday Bomb from going off. His girlfriend Mary (who must be used to this kind of thing) seems surprisingly supportive. She’s a cool chick, that Mary. And while Bang might not be as entertaining to look at as Scott Pilgrim’s ex-girlfriend from the band, he’s pretty close. Check out those pecs. 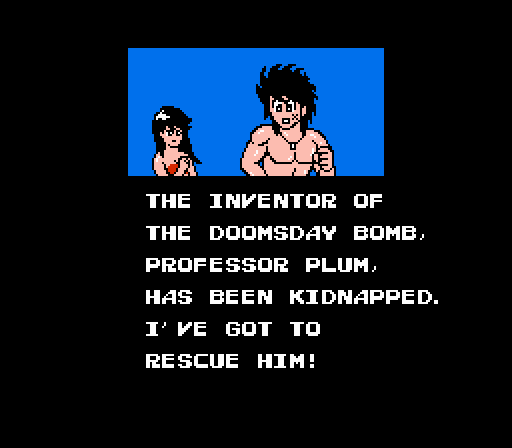 This game could have easily fallen prey to the Super Mario Bros. formula that prevailed at the time:

Instead, the designers went for an “overworld” of sorts, with the character starting out between different routes, each one representing a short level to navigate. Different levels have different scenery, enemies, and obstacles. Touching a mask/head/statue thing at either end of a level sends you back to this map, where you choose which route to take: 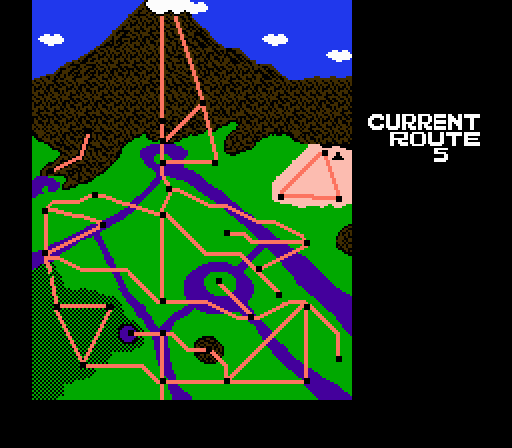 To me, this SCREAMS “handwritten notes page.”

Even the classic “fall down a pit and die” trope has been subverted, instead dropping you into an underground acid-trip of a level with ominous music. Make it to the end of THAT level and you go to the map, ready to try again.

This game has a lot in common with Mega Man. You run, jump, and shoot your way through enemies, you have decent control over your jumps in midair, you get knocked back when hit, and you can hit something sideways from half a screen away but have trouble firing at something six inches above your head. Luckily, the shop sells weapons to help you out: 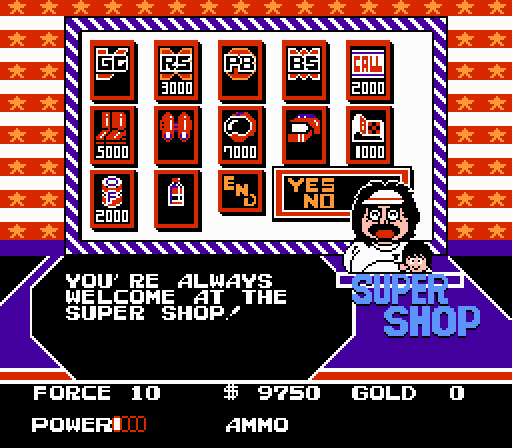 The shop screen has a plethora of special limited-ammo weapons to choose from, as well as better suits for flying, running fast, diving underwater, or even swimming in lava, which is not only necessary to complete the game but also kicks ass.

This is straight out of a 1940s sci-fi flick: Professor Plum, who created a Doomsday Bomb that could destroy the world (yet is somehow still considered a good guy), has been captured along with his device. The bomb is controlled by seven medallions, scattered and guarded by the seven Governors of Demonhead. You must recover the medallions, but on the way you suffer a series of headaches and mental trauma, thinking that it’s some kind of psychic attack. No, wait, it’s a demon behind the whole thing. No, wait, it was aliens all along. No, I’m not making this up.

The premise is so ridiculous that you can’t help but love it. And since the Big Bad is apparently a graduate of Dr. Wily’s Arch-Villain Academy and All-Nite Robot Buffet, all of these governors are found in hard-to-reach rectangular rooms that are conveniently sized to match your screen.

The dialogue is campy but surprisingly well-translated, given the care and budgeting usually given to such localization projects on the NES (Haw!). It’s flat-out better than some “classic” NES games, where poor translations can distract you from otherwise solid gameplay. 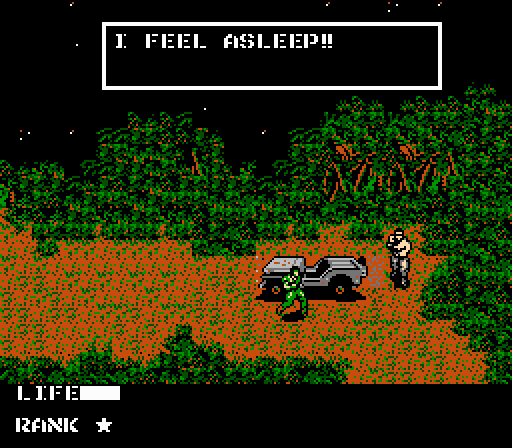 You know which ones I’m talking about.

The controls are surprisingly responsive, and the hideously unfair wall-climbing segments are few and far between. Levels are challenging but not impossible, and most players will learn the ropes without any fuss, making a great balance between learning curve and fun. Only a couple sections have an unlucky combination of enemies that guarantee you’ll take some hits. 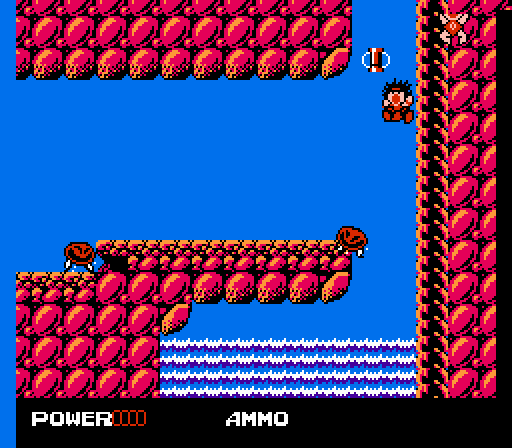 Like this wall. PISS on this damn wall. I died here a LOT.

Facial expressions are drawn extremely well during the talking segments, and add flavor to the game that otherwise would just be wasted opportunity. The art style turns these segments from boring skip-text into something worth reading and enjoying. 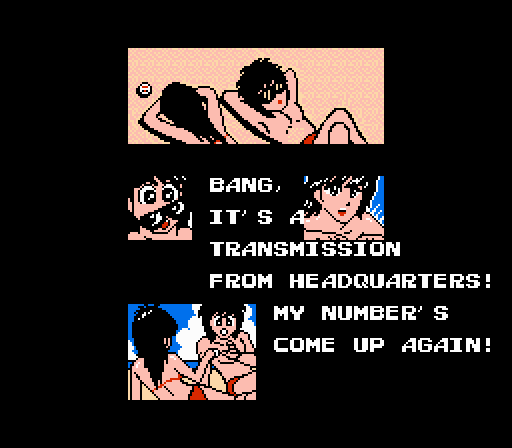 Instead of doing nothing but lazy palette-swaps for different areas, the designers created different sprites of the monsters for various places around the map. The enemies themselves are ridiculous in a good way, and give the game even more of a campy whimsical feel. At one point, there are dancing bikini girls wearing giant mushroom caps on their heads that lob bullets at you. Giant monkeys in tiny bowler hats will go wide-eyed when you shoot them. The first boss you’ll fight is a giant-headed dinosaur on a jet motorcycle breathing fireballs. POOT yeah.

The game has over-the-top style and cartoonish feel that, when coupled with the dialogue, makes it almost feel like you’re in the Dragon Ball Z universe. There are serious things going on, to be sure, but you still enjoy the ride.

7. The Lack of Direction

Some reviews I’ve seen will state “lack of direction” as a negative. The game is vague about many things, and while the translation is great compared to other games of the time it’s still not perfect enough that you know exactly where to go, every time. There’s a section in the middle especially that comes to mind, where the player must go to a certain spot of a certain route, and kneel down with a certain item in hand to open up a secret door that you didn’t know you were supposed to enter.

To me, those kinds of things encourage exploration and experimentation, and I miss them. I have a real beef with many of today’s games, where you can’t start a new game without tutorials through the first hour at least. There’s none of that here. One cryptic paragraph and a huge world map: We’re off! There’s shit to explore! 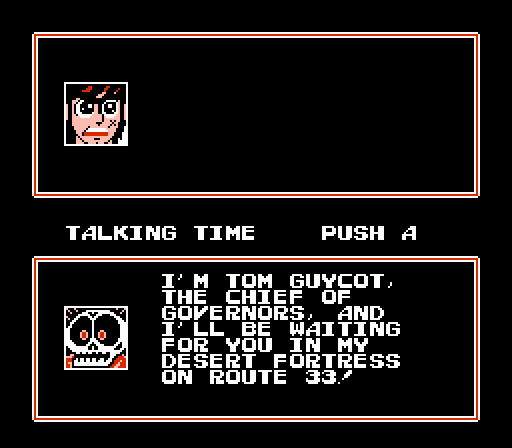 Every time a bell rings, an angel gets its wings. But every time a tutorial interrupts gameplay, a ninja harvests an angel’s wings and wipes his ass with the feathers.

There are many routes in the game that exist for no reason but to get from one point to another. These can get really old, really fast. There’s nothing to these levels but to get through them, and while the boredom doesn’t make the rest of the game suffer much, it’s still there. 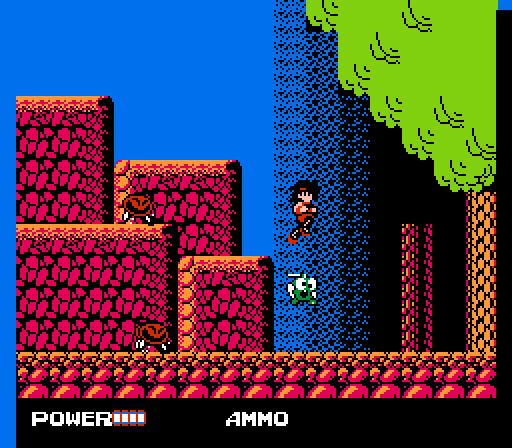 Remember which route this is? Me neither.

The controls are responsive, but a little TOO responsive at times. Bang can jump on the surface of a body of water, saving himself the loss of life from being underwater without a suit, but the timing of these jumps is extremely touchy.

As mentioned before, climbing walls (or any kind of vertical movement) is just a bitch. It’s not uncommon to lose a fair bit of health climbing up a screen-tall wall, only to get hit by a cheap shot at the top and fall down TWO screens to the bottom again. 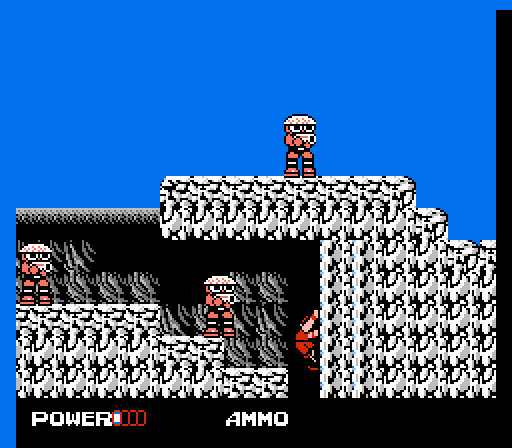 Died here too. Fuck the ladders in this game.

Falling down pits may not kill you, but it’s certainly annoying. The underground levels all look the same, and are nigh impossible to get out of without taking a hit or two. Quite often the enemies are laid out so that you’re guaranteed to get hit upon landing, no matter how good you are.

It’s not the weapons system that I don’t like, it’s the way you acquire these weapons. To enter the shop, you use an item called the “Shop Call” from your inventory. A little “SHOP” sign flutters down from the sky, and jumping into it takes you to the shop. This means that it’s possible to go shopping from almost anywhere in the game!

…unless you forget to buy another shop call while you’re in there. This has seriously happened to me more times than I can count. I forget to buy a shop call, usually because I had bought a 3-pack some time earlier and was too optimistic about my reserves. 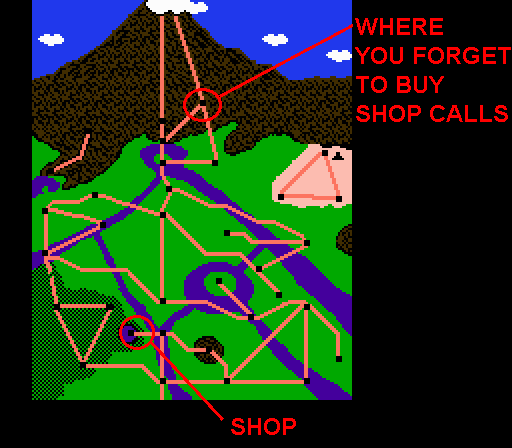 When this happens, there’s no way to get back to the game’s shop unless you go to ONE specific location on the map: a dock at the end of a relatively long level, right at the end of Route 5. This means that if you’re chilling on Guycot’s island fortress (Route 33, remember?), then you’ve got to traipse your forgetful behind aaaaaalll the way back to the start of the game. Once I made this trip, went to the shop to buy stuff, then made it back to Route 20 or so before I realized that I had still forgotten to buy shop calls. 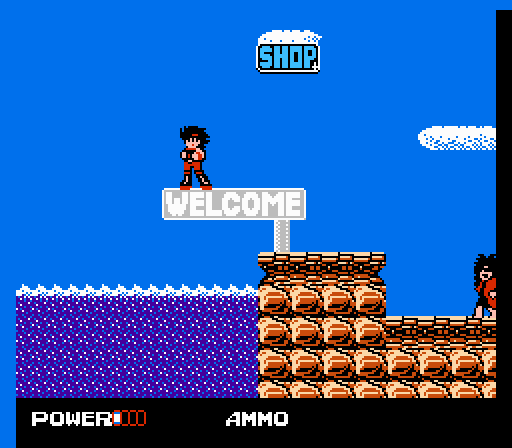 It’s the video game equivalent of going to the grocery store for one thing, then coming back with a shopping cart’s worth of random stuff, none of which is what you set out for in the first place. There’s no one to blame for this one but user error, but I still wish the designers had made more than one guaranteed shop location.

This game has flaws, and honestly the in-game graphics haven’t aged well. The soundtrack is decent enough when you first hear it, but suffers from a lack of variety once you’ve heard it all a few hundred times. It’s very similar to Rygar in that respect. The control scheme is a bit simplistic, and even with an online walkthrough the game WILL take some practice. You won’t beat this thing the first time through, it’s almost guaranteed. 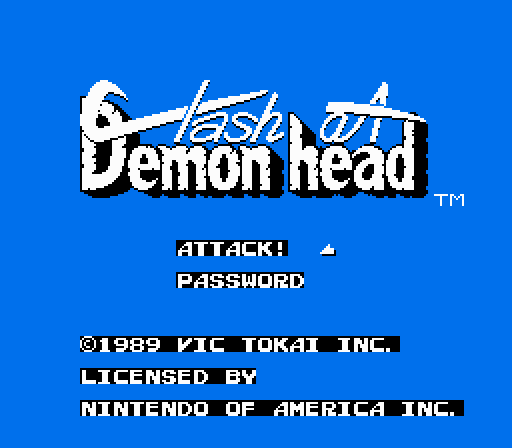 Honorable Mention: I love how the opening screen has you “ATTACK!” instead of “START.”

If you take a step back and try the game for what it is, with no expectations or comparisons to color your vision, then I think you’ll find Clash at Demonhead an enjoyable venture. It’s gained in popularity lately but is still considered among the “semi-dirt-cheap” category of NES games, so you should be able to find it for a reasonable price. Grab a copy, before Bang steals your girlfriend.

I tend to write a lot. All in favour of a short review say aye. Aye. Where Katamari Damacy greatly innovates, Me My Katamari thoroughly improves. By its very nature, designed for the "bus journey ho