Well, spit on my spats and curse me kilts! After years of begging, we are finally going to see a new DuckTales videogame! Uncle Scrooge rides again!

Yes! Duck Tales 3 has been on my wish list since the 1990s, and now it’s a reality! I can’t wait to see what brand-new adventures Uncle Scrooge has… 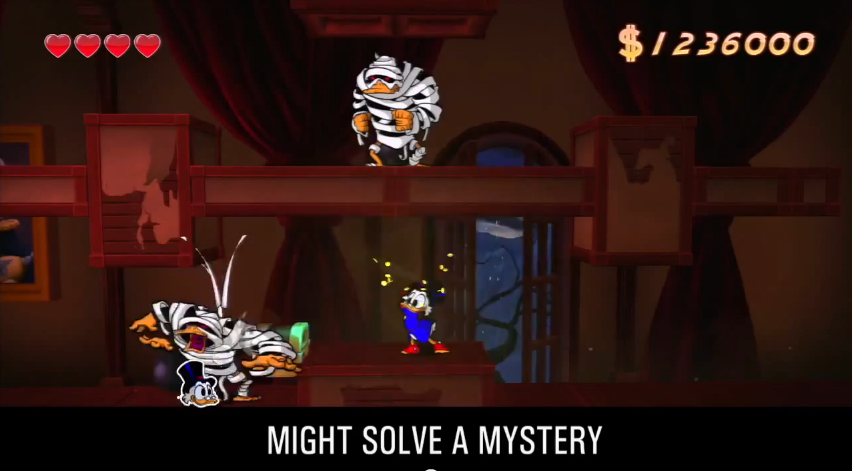 Blathering blatherskite! This isn’t a new game! It’s just an HD remake of the first NES game. Oh, well, that’s still cool, right? I’m not going to turn that down! Let’s hope it sells well, and they do a remake of the second game, too!

Actually, you know what? I think the next step is an HD remake of the first DuckTales Game Boy game. It’s so similar to the NES version that programming it should be a cinch. Get on it, Capcom! Easy money! Easssy money! I’m not just making things up because I want more DuckTales gameplay!

I also want more DuckTales footage. What’s up with the DuckTales DVD releases? They only released three volumes of the four-volume series! I’ve been waiting for Volume 4 since 2007! Get on it, Disney! Easy money! Easssy money!

The one thing I don’t want? A crossover between DuckTales and Duck Hunt. Those are two NES games that should remain separate.

Anyway, that’s the news. DuckTales HD is coming your way, and it is going to be awesome! I hope you’re ready! This game—not Final Fantasy VII—is the HD remake you’ve been dreaming about! And if you get stuck on the game, make sure to consult my walkthrough for it!