Judging from the Flash games I’ve reviewed, most people enjoy such uplifting, family-friendly activities as stacking blocks on top of each other, guiding dinosaurs to safety, and saving Christmas. D’aww. For the rest of us, there are these games.

Don’t get me wrong—I’m a goody-two-shoes if ever there was one. The games I’m about to review condone and celebrate the kinds of awful things I wouldn’t dream of doing to poor, innocent people and soy products. But there’s gotta be somebody keeping Dr. Demento on the air, and it’s people like you and me.

Yes, you. You’ve read this far. You’re involved now, and you’re about to become a terrible person, if you’re not one already.

So, Flash games. Here’s how my appalling rating system works:

5 = Wonderfully terrible. I want to say, “the Ivan the Terrible of Flash games,” but historical puns are not my strong suit, I’m tsar-y to say.

4 = Very wrong. But being wrong is right, so then it’s good again. And that’s the evilest thing of all.

2 = Neither terrible nor all that great. Like, I dunno, Hägar the Horrible or something.

0 = Go ahead! Run away! Say it was horrible! Spread the word! Tell a friend! Tell them the tale! Get a pic! Do a blog! I’m going to stop quoting song lyrics now.

This month’s theme: Just kidding. I’d never stoop so low as to do an article on games for terrible people. Everything I’ve chosen is completely prosaic, harmless, and appropriate for all ages.

Description: You are a tree. You are highly flammable. As it turns out, so are people. (see: EarthBound.) Explode into a raging fireball, LIGHT PEOPLE ON FIRE, and revert back to your stealthy tree form to replenish yourself in the rain. Rack up as many points as you can! You horrible tree. 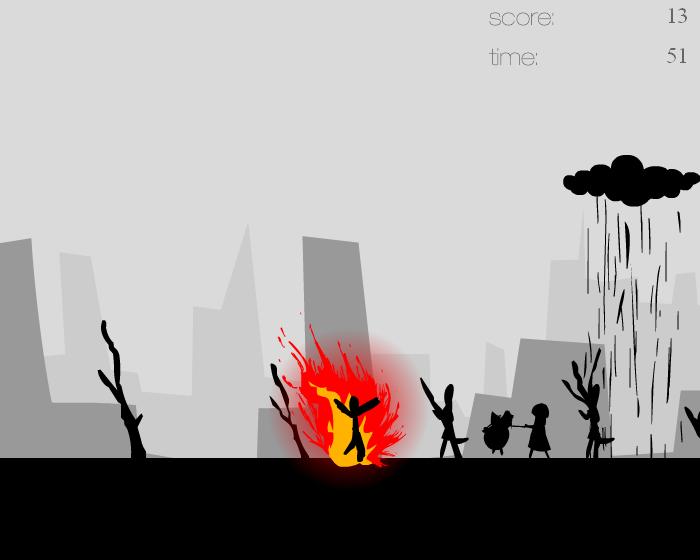 Review: There’s not much in the way of gameplay here, but the absurd contrast between tree and fireball makes me laugh out loud, and the game’s instructions make an amusing effort to dissuade you from the notion that fricasseeing passersby is at all reprehensible.

Verdict: 3/5: The core mechanic works nicely, and it’s good for a guffaw, but there’s not a lot of meat (exploding, burning meat) to keep the player invested after the novelty wears off.

Description: Take FlightSimX Paperplane Game, change the setting from an office to the coast of Australia, and instead of throwing paper airplanes, throw immigrants. 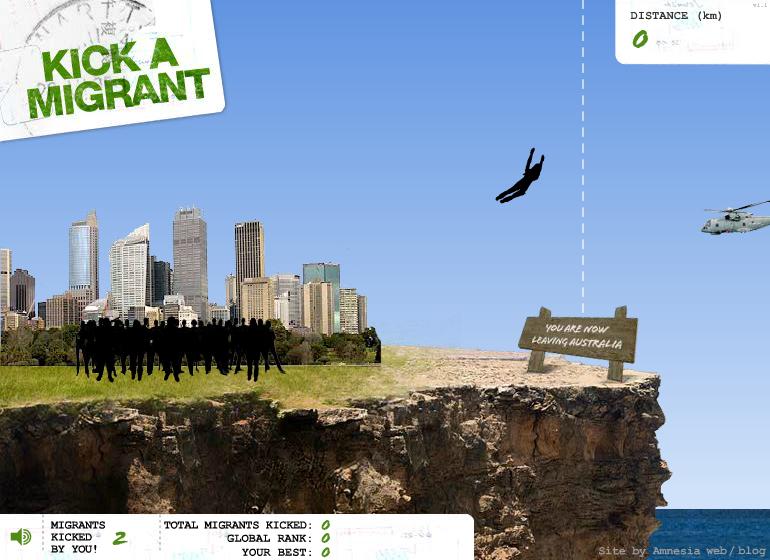 Review: Immigrants aren’t nearly as aerodynamic as paper airplanes, so already the task of going for distance is more of a chore than a challenge. The clever twist (which you’ll discover shortly after chucking your first migrant) is the only reason I’d recommend this game over any other game where you kick migrants out of Australia.

Creator: This Is Pop

Description: Pick up a weapon and take aim at a herd of cute, defenseless, easily startled tofu. 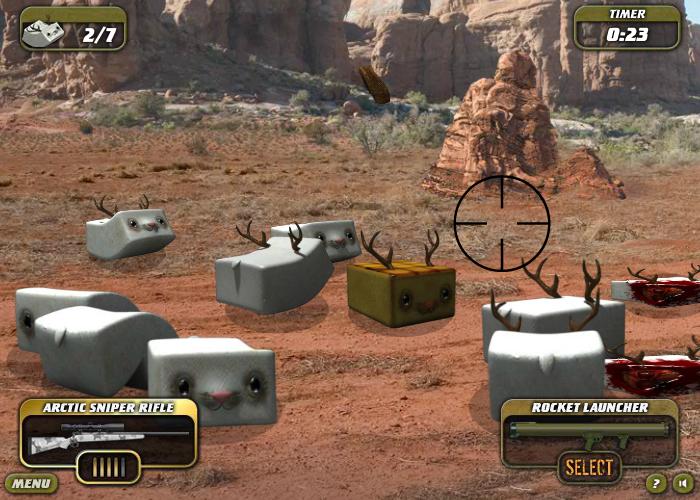 Review: I am surprised at the overall quality of this game, which is ostensibly just an excuse to poke fun at vegans, vegetarians, and animal rights activists by murdering the anthropomorphic bean curds they hold so dear. The gameplay’s as addictive as any shooting gallery, and bonus beasts, unlockable weapons, and a trio of different environments keep the action from drying out. The visuals are very nice as well—I can’t believe I’m saying this, but I really like the texture of the tofu. Probably not the best game to play at work (or around my vegetarian wife, for that matter); the game prominently features bloody explosions and bikini babes (which occur separately, thankfully).

Verdict: 4/5: Unexpectedly engaging gameplay and charmingly twisted satire make it almost worth sleeping on the couch after my wife reads this article.

Description: The zombie apocalypse is here! You brought it. Selectively target people to infect, watch the virus spread, and pickpocket the dead to finance your next attack! It’s like how the spirit of charity works, but with more screaming. 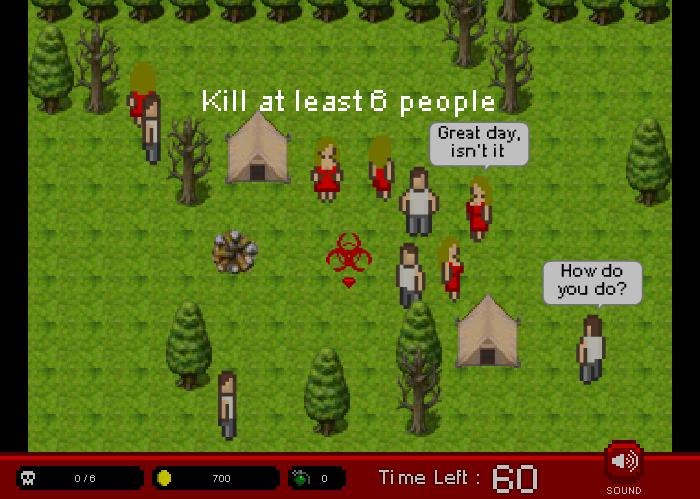 Review: Considering the game essentially plays itself after the first click, this one’s unusually fun. Picking the right time and place to strike, collecting all the coins that erupt from the chaos, and carefully (or haphazardly) choosing upgrades between attempts provide an enjoyable variety of strategic elements, and the difficulty is scaled nicely. After a few levels, you’ll be so engrossed in the game that you’ll start forgetting to feel remorse for the gory massacres you’re initiating.

Verdict: 4/5: If your conscience has some vacation time coming, this is a solidly entertaining little strategy game.

Description: Over the course of fifty child-proof levels, repeatedly guide a miserable, overworked employee into the merciful jaws of contrived and excruciating death. 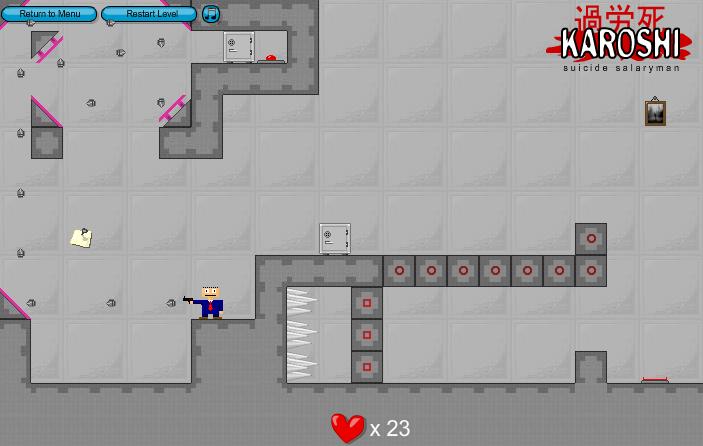 Review: Finally, a puzzle-platformer that rewards me for playing it like it’s Space Quest. While the graphics and some puzzles could use more pizzazz (except for the ridiculously over-the-top death explosions, which coat the walls in pizzazz), the learning curve is steady, the music is catchy, and it’s refreshing to play a game where that nuisance we call self-preservation is counterproductive for a change.

Verdict: 3/5: There’s room for improvement, but the topsy-turvy challenges make it worth a look. It wouldn’t kill you to try it.

I need a shower.

Somewhere over the rainbow, game up high...