There’s a new DuckTales game that was released recently, and no, it’s not DuckTales Remastered. This game is a first-person shooter with online multiplayer, and I cannot get over how weird the concept is. Seriously. DuckTales: The First-Person Shooter. This was on my list of “Games Disney Will Never Make This Year,” right after Disney Princess Battle.

For this review, I’m coming up with a unique scoring system. The game will be judged on three points: 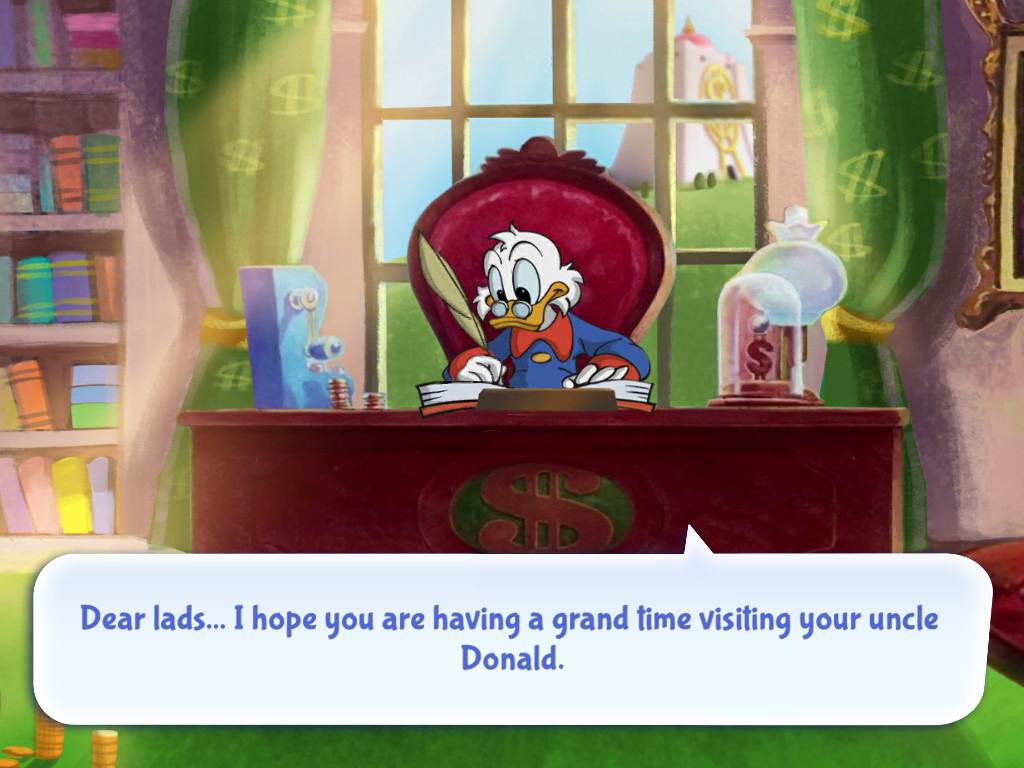 “Here in Duckburg, I’ve been making a videogame without you. Sorry.”

All right, we’ve got our first completely new DuckTales game since 1994. Does it resemble the long-cancelled show that it is based off of?

Well…only for the first five minutes.

The opening scene features Scrooge McDuck in his office, writing a letter to explain why his nephews won’t appear in the game. Launchpad is there for some reason, when there’s an explosion outside. Oh no! Three of the DuckTales villains are stealing Scrooge’s money bin!

That about does it for the game’s resemblance to DuckTales. Once the half-minute introduction is over, you will never see Scrooge again. Launchpad sticks around for the tutorial, but then he disappears for the rest of the game, besides his appearances on the game’s death screen.

It’s nice to see they got the original voice actors for the start of the game. Even if it’s not fully animated, it looks nice! I can even overlook the fact that the villains technically can’t steal the money bin outside Scrooge’s office, because the office is located inside the money bin. I just feel a little let down that the rest of the game bears minimal resemblance to the source material, besides for “all the characters are ducks”.

Honestly, they could have easily slapped another license on the game, and nobody would have been able to tell the difference. There are a few references to the show in the item descriptions, but that’s about it. None of the characters you’ll play as are from the show, and none of the locations you’ll visit are from the show. So for DuckTales-ness, the fully-voiced opening cutscene and tutorial get an 8, while the rest of the game gets a 2. That balances out to a 5. 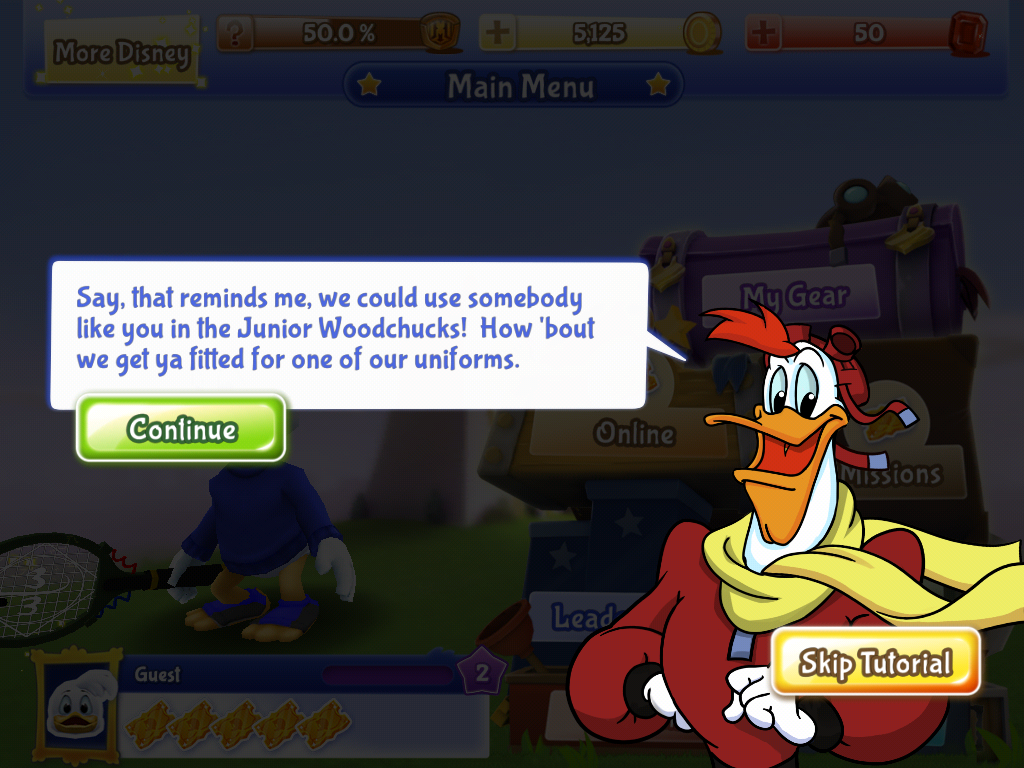 I want a copy of the Junior Woodchucks Guidebook.

So that’s a fair warning to you first-person shooter fans. I’m probably going to rate the game lower than you would, because the genre doesn’t appeal to me. I forgot to mention that the last time I reviewed a fighting game, and all the fans of fighting games were mad at me because of it. Same thing with the casual RPG fans.

The game’s main feature is its online mulitplayer mode. However, it still can be played offline, where you play against computer characters, rather than other people. Since the closest I’ve ever come to online multiplayer is Words With Friends, I played the entire game in single-player mode. And jeez, was I horrible at it! 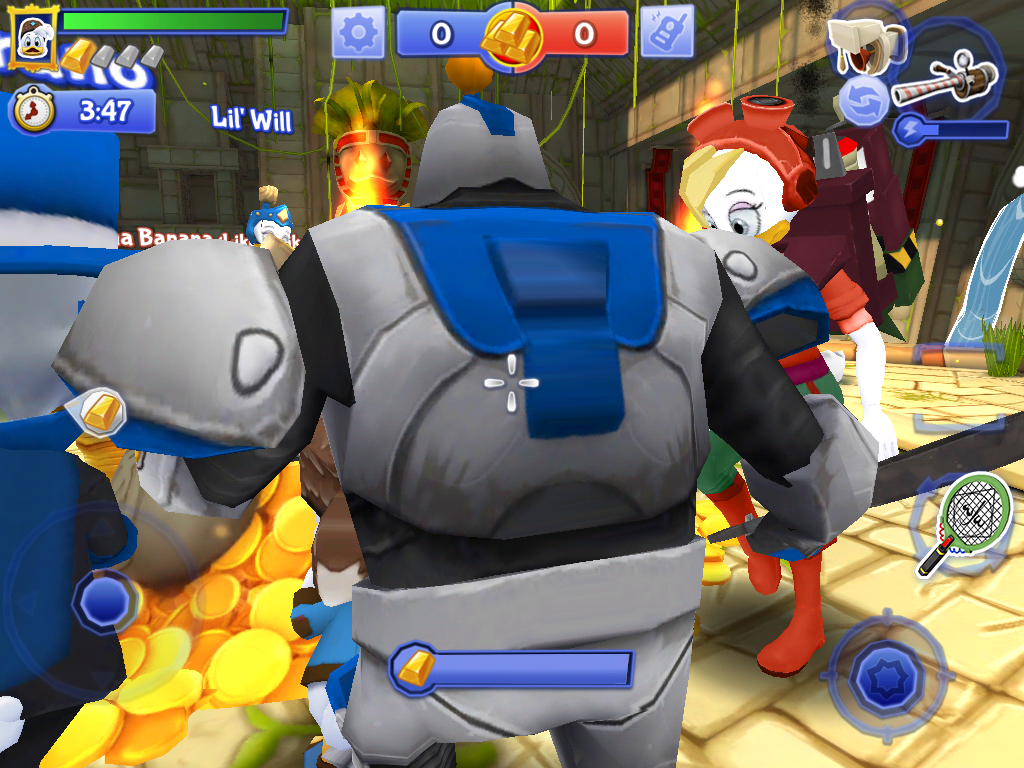 A  typical “start of match” moment. Note that some big guy is completely blocking the camera view.

If you’re lucky, or if you just hold back for a few seconds, you can make a pick-up without being killed. When this happens, you run to the drop-off point, where you accidentally run into members from the other team, who instantly kill you. The team that makes the most drop-offs in four minutes wins!

Since this is DuckTales, none of the weapons are guns.  They’re things like spitballs, ray guns, pancakes, ice cream, and spaghetti. I think the game’s developers were hungry when they designed the game, because half of the weapons are food. The weirdest character’s arsenal has to be the female pilot’s. She attacks with missiles and overhead luggage. Also, she’s trained in falconry, so she can send hawks to attack you. That’s right, the ducks attack each other with hawks. This weapon system makes no sense.

The controls are a little bit off, in that you need one thumb to move your character around, one thumb to shoot weapons, and a third thumb to move the camera. The camera is okay, but readjusting it can be a pain sometimes, and it’s never fun when enemies kill you while you’re busy moving the camera away from a wall. Besides the manual control, the game’s camera also has an auto-focus feature, tied to the attack button. It’s a good idea, but it fails completely, because you have to hit the attack button dead-center or else the camera angle will shift and your attacks will miss.

I’m not the only reviewer to complain about the camera/attack button, but I’m not sure if it’s the game’s fault. Maybe I just need to adjust the sensitivity of the game’s controls. Or maybe I’m just bad at first-person shooters. I’ve noticed that I have a hard time hitting enemies, unless they happen to be standing in place and facing the other direction. Even when I use the auto-aiming system, I can only hit an enemy twice before all my other shots miss.

I’ll give the first-person shooter sections a 3. 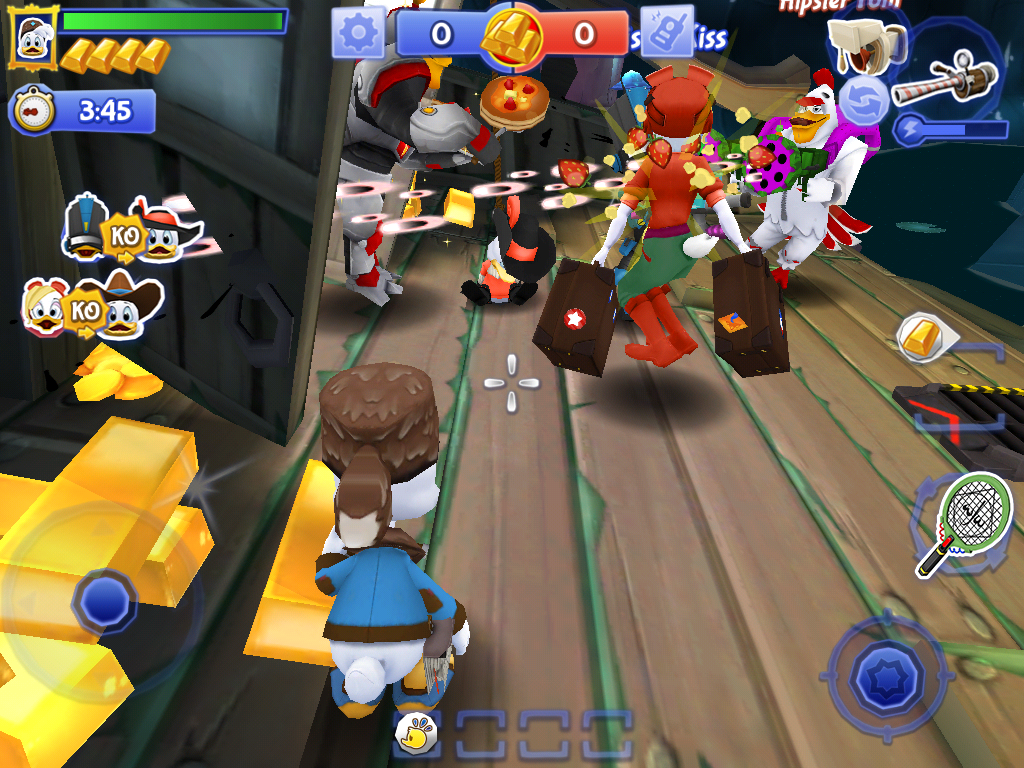 Another screenshot. Note that all four members of the other team are in front of me, yet the auto-aiming system has latched onto none of them.

Apparently, the current industry standard is to include a ridiculous number of in-game purchases, without which you cannot beat the game. I’m sure Scrooge McDuck would approve of making a profit at any cost. Expect to see the “premium in-game currency” scheme and the “daily rewards to ensure you keep playing” trick. There are also several “missions” to complete, some of which involve being good at the game, and others of which involve being good at buying things in the store.

There are four characters in the game. They start off with low stats, forcing you to buy stat upgrades. Each character has four or so different outfits, and illogically, stats don’t carry over from outfit to outfit. Did your character just put on a hat? That means your stats have just been cut in half! Ha ha!

You automatically get 150 coins, after playing a four-minute match. If you pick up a lot of items or kill a lot of enemies, the amount of money you get can increase to a maximum of 250 coins.

Everything in the store starts at Level 1. All Level 2 purchases are 500 coins, so that’s tolerable. Just play three or so games, and you can get the item you want. Level 3 items are a bit harder, at 1500 coins, requiring you to play ten games. Level 4 is 5,000 coins (thirty-three games), and Level 5 is 10,000 coins (66 games). Doing the math here, if you bought something at Level 5, you must have played 112 games, which takes 448 minutes (7 hours and 28 minutes). Don’t forget that all the game’s items have four stats, which must be upgraded separately!

I would be remiss if I did not mention the “game limit” feature. Unless you make a purchase with premium currency, you cannot play more than five games in a row. The number of available games increases at the rate of one game per half-hour. To get around this, I manually changed the time on my device and turned off Internet access. This allowed me to play an infinite number of games in a row, but it still took an overly long time to get enough money to purchase anything. Eventually, I just stopped playing the game completely, only pressing the “start a match” button every five minutes to get 150 coins.

I think I’ll give the game a 3, for the money-grabbing ploys that detract from the gameplay. I’d like to rate it lower than that, but most of the game’s nickel-and-dime features are industry standards right now. So there’s a chance that the game’s designers aren’t cheap money-grabbers; maybe they’re just riding whatever gaming trends are popular right now. 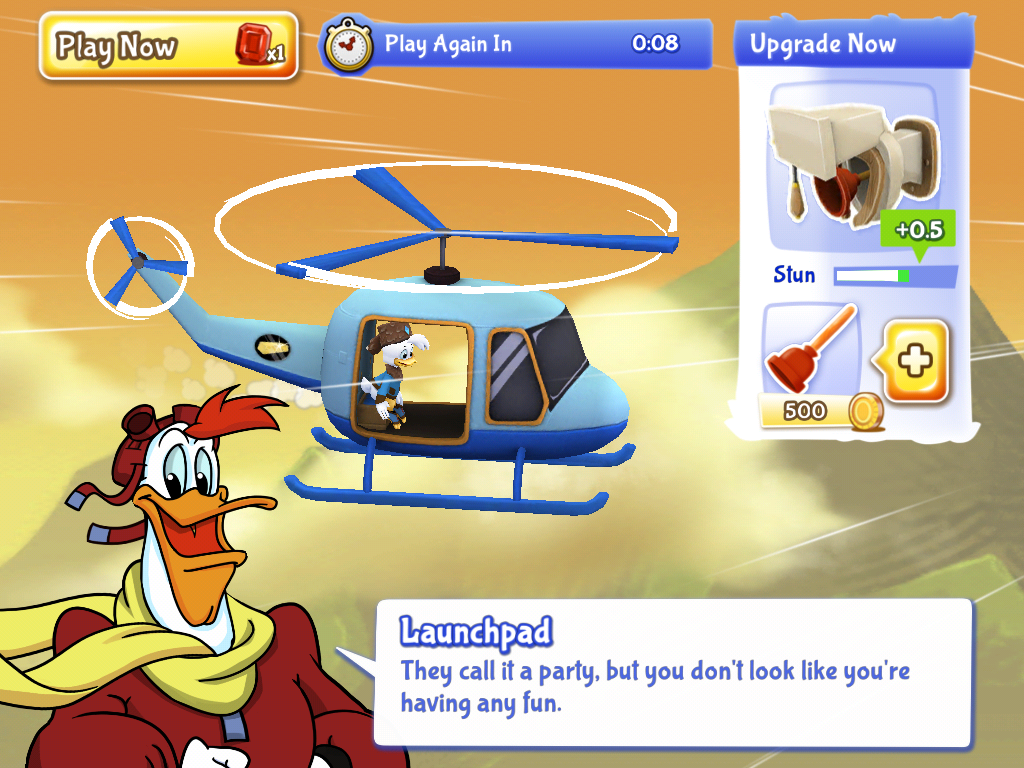 Note to Game Developers: It’s not a good idea to have characters insult the game for not being fun.

Did I mention it’s weird that this game exists? Because it’s weird. The DuckTales TV series ended 23 years ago, and the DuckTales videogame series has been dead for 19 years. Why bring it back now? Why revive it as an FPS MMO, a genre which barely existed when the last game was made? Yes, it’s a fun Disney franchise which looks surprisingly great in 3D, but the entire project strikes me as odd, especially considering that the game’s release came out of nowhere.

Despite my complaints, I like having a new DuckTales game. I also like the fact that the game is free. It was good for a half hour or so, until my lack of first-person shooter skills resulted in colossal failure on my part. I’m sure other people can get more mileage out of it than I did, especially if they have friends to play along with in multiplayer mode.