Where’s Waldo? was rated the third worst game of all time (and the worst NES game)  and was given a full review back in 2003, but I thought it was worth taking a look at myself.

Where’s Waldo? is an entertaining series of “books” where the “reader” must search for Waldo, a striped, hat-wearing fellow in different environments and time periods. I loosely use the word “books” here, because there’s really not much to read other than the initial instructions to find Waldo and other artifacts. I remember there being a waiting list at my elementary school’s library to get the real Where’s Waldo? books. Hopefully you were fortunate enough to get a copy of a book without the previous jerk-wad circling Waldo on every page. Suffice it to say, these books were wildly popular. And with all popular things, someone has to go make a videogame out of the concept, even when it doesn’t translate well to the videogame medium.

Waldo has to get to the moon, perhaps so he can stop hiding from little kids and be by himself. To do this, he has to walk around different places like a train station and castle before reaching the launch station, where he apparently already has launch access. At each location, you’ll have to find Waldo hiding. The books will make it challenging by having characters and objects with a similar appearance to Waldo to throw you off. In the NES game, you’ll face a bunch of blurry graphics that look as hideous and unintelligible as Waldo himself. In the books, you could always fall back on Waldo’s red-and-white-striped shirt, glasses, and blue pants. Here, Waldo sometimes has different color pants and shirt. What the hell? How am I supposed to consistently find him? This, combined with the atrocious graphics, makes this game almost unplayable. 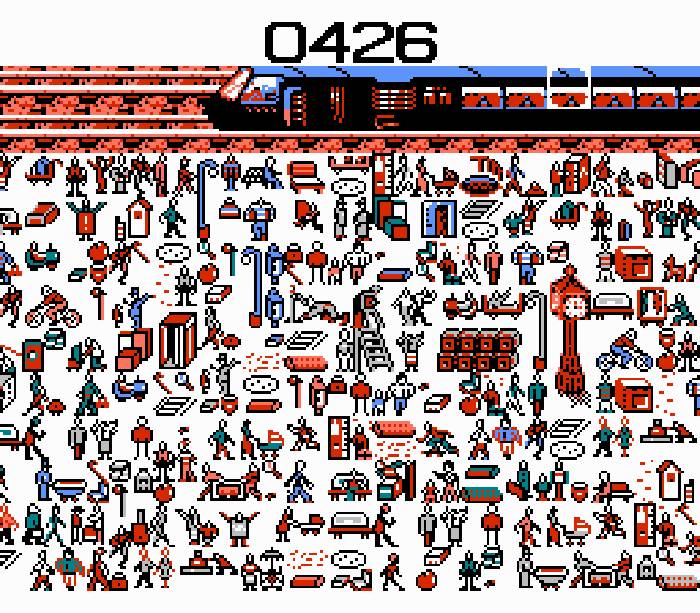 No, someone didn’t throw up on the NES; this is an actual stage in the game. It’s randomized to the point where there’s just a bunch of crap on the screen that doesn’t even make a realistic scene. What a turd.

It’s really inexcusable. In 1991, we already had Mario 3 on the NES, and the SNES just came out. Most NES games that were released after the SNES came out actually look pretty nice in the graphics department. This game doesn’t even have animation in the actual stages. I know the NES is capable of decent-looking still images, and yet here, they look like ass. The developers decided to put their animation efforts into the scene where Waldo walks to the next stage and the ending where he’s on the moon. I know the NES has limited color palettes, but this is simply unacceptable.

Another thing I enjoyed doing with the books was teaming up with a friend to find Waldo, or maybe compete, trying to find Waldo before my friend. The NES game doesn’t feature a competitive or cooperative mode, so my dreams were instantly shattered. With how simple this game isn’t, couldn’t they have come up with more interesting modes? Instead, they give you a cave level where Waldo is by himself in the cave and you use the cursor like a searchlight to find him. Once you do, you have to pick up his glasses and then click on a random white square, which finishes the level. You’ll also go to a subway level where you’ll control a subway train through different subway tunnels to get Waldo, who flashes across different subway ports on the map. Wizard Whitebeard is also here. If your subway train hits him, he will drain your timer extremely quickly, killing you. This makes no sense! Whitebeard is a guide for Waldo, an ally. Why is he trying to kill you? Finally, once you get to the shuttle launcher, you’ll have to play a slot machine and try to match three Waldos. You have to keep trying over and over until you get it. It’s really high-pressure. Slot machines are meant to be for bonuses, like in Super Mario Bros. 2 and Star Fox, not a required final level. I can understand that they wanted to think outside the box some, but that should be a signal enough that Waldo shouldn’t be a video game.

Finally, Waldo reaches the moon. Why is the land red, though? Probably from all the people playing his game and bleeding out in agony.

I can’t imagine someone paying $50 for this when you can probably buy all of the books for the same price and have enough left over to buy yourself a couple of slap bracelets. It’s hard to imagine that this game was developed by Bethesda Softworks, the people who brought us Fallout 3 and Skyrim.

I really wanted to give this game a zero for essentially being unplayable. But, I was able to make enough educated guesses to select Waldo, but I never felt confident it was him. I would think, “Well, there’s something with stripes; maybe it is him.” Technically, the game is beatable, just like how, technically, Arby’s is food. I tried to think of something positive about this game, but it really sucks the fun out of the books and gives you something you should feel ashamed you’ve played.