A Princess needs saving. What’s so ‘New’ and ‘Super’ about that?

New Super Mario Bros. is one of Nintendo’s many attempts to update the style and control of the Super Mario Bros. series of video games. This is the most recent installment, and when the first draft of this review was started in 2012, the game had just literally come out. That’s how long some of these reviews take to write. What is so special about NSMBU? Why does it sound like somebody is sneezing when you pronounce the acronym as though it were a word? I don’t know.

Wait, wait… You think this is mainstream? You do know how few people actually own a Wii U, right? Well, before that devilish sales boost.

So to get things underway, we have to tackle the most important thing. Now, there are many things that matter in Super Mario Bros., but the most important element to me is the mechanics of the game. The New Super Mario Bros. formula translates well to the Wii U GamePad. Mario can twist and turn with the triggers, run and jump in traditional NES fare with the face buttons and directional pad, and tilt things in the world via gyroscopic control. The behavior of Mario, such as running speed, jump height, double- and triple-jumps and so on are translated beautifully to the GamePad controller. The game can also be played with a Wiimote sideways, or with a Classic Controller (or Pro)—co-op players must play with one of these.

You use these techniques to succeed in beating the main goal of the game: rescuing Princess Peach. That’s fresh and exciting. This time, Bowser takes over Peach’s Castle, a move uncommon in the series. I can only think of one instance where this has happened: Paper Mario. The action-hero plumber with gang in tow (if playing in co-op) are flung far away and must traverse their merry way back to Peach’s Castle. It serves as a good explanation for why we have yet more areas and power-ups unfamiliar to us.

The difficulty level increases steadily throughout the game with a few large spikes near the end; a level where globs of magma fall from the sky is particularly brutal. I imagine the game to be easier in co-op, but then I recall my past experiences playing New Super Mario Bros. Wii—players jumping and bouncing off each other’s heads into lava—so it probably isn’t any easier. 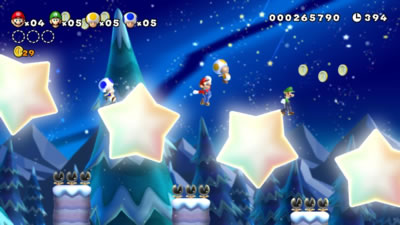 The main new addition to the formula is the Acorn power-up, which enables Mario to transform into Flying Squirrel Mario. Mario can descend slowly and swoop upwards quickly. The other power-ups from New Super Mario Bros. return, except for the Mega Mushroom, which is once again shockingly absent. It makes its eventual re-appearance in 3D Land and 3D World.

There are eight main worlds; each one has a theme, and with each theme comes several gimmicks. The gimmicks help to keep the game fresh, whether they be moving platforms, rushing geysers, or a visit from our favourite green dinosaur. The number of water levels, even in the water-themed world, is small. Also, given the way the game progression is organised, you can completely skip the water-themed world. Those who complain about water levels as if they are somehow cursed need not worry about that; they should instead worry about something important.

While it may seem ridiculous that the Wii U’s HD capability is being partially squandered on a 2D Super Mario game rather than a 3D title, the colour vibrancy and level of detail everywhere in the game are truly splendorous and completely impossible to achieve on the original Wii. The final boss is highly detailed and the perfect sign-off to the game, and an impressive use of the Wii U’s incredible technical specifications. A 3D Mario game eventually arrived in the form of 3D World. 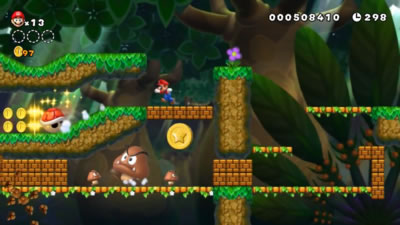 The music is fairly generic for Super Mario Bros. The soundtrack is helped along by the new theme music that appears throughout the game in various places and styles. Some classic songs appear in bonus levels and areas. The sound direction is fairly basic, though, and Charles Martinet is starting to sound like a parody of himself, which detracts a bit from the experience.

Various minigames and challenges are included in the game, and for these you can play as a Mii character. They feel tacked on, but they do provide extra replay value in the form of high scores. Certainly not a waste of time, but a feature that doesn’t really do anything for me. The Miiverse feature allows you to read and post messages about the game. This feature isn’t too distracting, but even if it is for you, you can disable it. It is humorous to see messages of pure hatred pop up when dying over and over on a tough level; it’s good knowing others share the same feeling.

There isn’t much else to say. The New Super Mario Bros. series doesn’t deviate much from its formula, it is exactly what you expect it to be. That’s not a bad thing. A high-quality and well-polished first-party Nintendo title for the Wii U—let’s be realistic, the Wii U doesn’t have much third party support, so you’re going to want most of Nintendo’s output anyway. Grab New Super Mario. Bros U for excellent Super Mario fun. It doesn’t get much simpler than that.

Hello everyone, and welcome back for another installment of testgame.exe: Making the Adventure! I gotta say, there's...really not that much to talk about this month. Go ahead and take a look at the l