Hello everyone, and welcome to another riveting installment of my column about getting representation in videogames! For those who have forgotten, “Disregard Canon, Acquire Representation” is a column I have devised where I tell you which characters are queer, trans, disabled, mentally ill, or some other marginalized identity that does not get representation. In some cases, I pick apart a character’s narrative and give you all the cues that resonate with being trans, while other times I analyze their body language and vocal cues; however, there are also going to be times where I tell you to just live with it because your favorite characters are trans. And this is going to be one of those times, so buckle up everyone and let’s get ready for a wild ride! 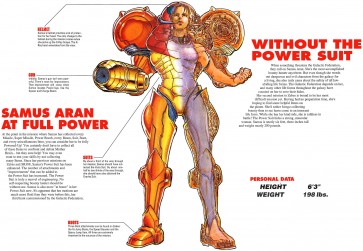 Even without the suit she could break you!

Samus Aran is totally a transgirl; how could we possibly have missed it? To start, she’s huge and supposed to be built like a brick house, as illustrated above! While short transgirls tend to exist that’s not to say they cannot be tall, and in fact many transwomen are usually really tall with regards to cis women. As well, the amount of muscle she has and her weight also lean toward her being trans, as that’s especially common among transwomen who transition later in life. Between all of that, there’s also the fact that this is a science-fiction universe, and it’s not so far-fetched that transness could be detected early and Samus could have been given the proper chemicals, hormones, and body reconstruction to ensure she developed through childhood as feminine as possible! There’s all sorts of ways for Samus to be trans, and it’s really not that outlandish, anyway! 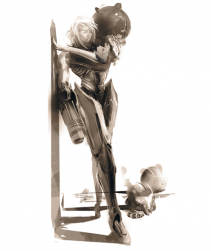 Samus, after receiving an injury that would’ve disarmed most people.

As with Commander Shepard, it’s very important to have action transgirls in our media! Especially with Samus, being such a long-established character with many games under her belt and an almost universal level of recognition, she would be a great character for transgirl recognition! And, in a universe where you’ve got evil humanoid lobsters, a giant semi-immortal pterodactyl monster, and energy-sucking jellyfish, this doesn’t seem very unusual! In fact, there are many species even on our own Earth that can change gender at will, and this seems something fairly common in a large galaxy full of a variety of lifeforms both sapient and not. But perhaps the most compelling argument for the necessity and normality of Samus being trans is that transwomen exist now, and they exist doing all manner of awesome things in life. This degree of representation is really important, and should be taken into special consideration.

Adam Malkovich is a strange character, first appearing in Metroid Fusion. Samus describes him as her gruff commanding officer. She also said that he makes a point of identifying her as “lady”—a strange thing to take note of in this future. Except, maybe it’s not so strange. When joining military forces, they get access to your medical records, and while they’re kept a secret, maybe someone said something and Adam found out. Perhaps his calling her lady started as more a bitter, perhaps sarcastic comment, surrounded by air quotes. Maybe Adam is a transphobe, and his calling her “lady”, his restricting her equipment in Other M, and when he even stuns her to go on his glorious death march—maybe all of those are expressions of transphobia.

This addresses two issues: one being transphobia, and the other being Stockholm Syndrome and regarding your abuser as a good person worthy of respect. The actions Adam takes throughout the game are wholly unnecessary and ultimately are him abusing Samus psychologically and in the end even physically, putting her life in danger and threatening the safety of the mission. Perhaps his heroic sacrifice was him realizing that he’s an awful person and deciding to do some good with his last breath. Or, maybe it’s him realizing he’s an awful person and doing something so that he’d be remembered as a good person after his death. That she later thinks of him as a respectable person isn’t unusual; most people maintain a positive view of abusers long after they’ve cut contact with them. It’s common that transwomen face abuse—that a strong transwoman faces abuse and is still presented as strong for it is incredibly important. 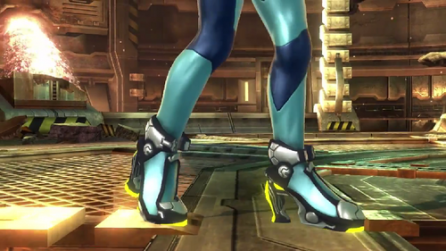 If you land on these the wrong way, you’ll fall flat on your back. The right way and you’ll break your toes.

In short, Samus is already an amazing character and would be made, like, ten times more so if she were a transwoman. She’s a strong intergalactic bounty hunter who frequently defeats horrifying evils, so being trans isn’t the most unrealistic thing about her life. Nevermind that transwomen have done amazing things in reality already! We exist, we’re fantastic, and we deserve representation that’s just as fantastic as we are! So, as the column’s name goes, I am disregarding your canon and acquiring representation. Samus Aran is a transgirl, and there’s nothing you can do about it.