“Fantasy football” sounds like it should be a sports game or a fantasy life sim. In reality, it’s more like a tabletop RPG than anything else. What a deceptive game title!

The good news is that Fright doesn’t have a deceptive title. It’s a horror game, designed to frighten you. It’s also an FMV adventure game, and I’m sold on it. 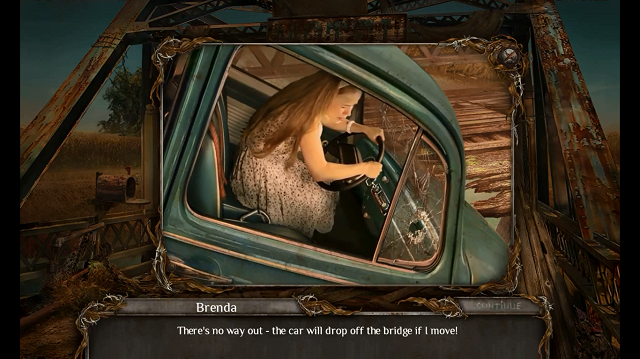 The game begins with your bus crashing in a corn field in Kansas. You need to find a way to fix the bus driver’s broken leg and get to safety. You make your way towards a run-down motel, you make a healing potion out of root beer, and before you know it, you’re chasing after a possessed woman in the basement. Or, as GameCola staffers sometimes call it, “Saturday Night”.

Eventually, you figure out the truth behind all the “disappearances”—AKA murders—and you appease the evil spirit with a stuffed animal named Mr. Bunny. Could this be a hint that Mr. Bunny is confirmed for Five Nights at Freddy’s 3?

The story might sound a little silly, but I liked it. There’s a definite sense of “something wants to kill you” throughout the entire game, and your character is knocked unconscious at least twice. There was a plot twist about the monster’s identity which I liked, and I’m willing to overlook the fact that some things were never explained, like the scarecrow that comes to life and starts choking you. Maybe the scarecrow was possessed by the ghost of dropped subplots. 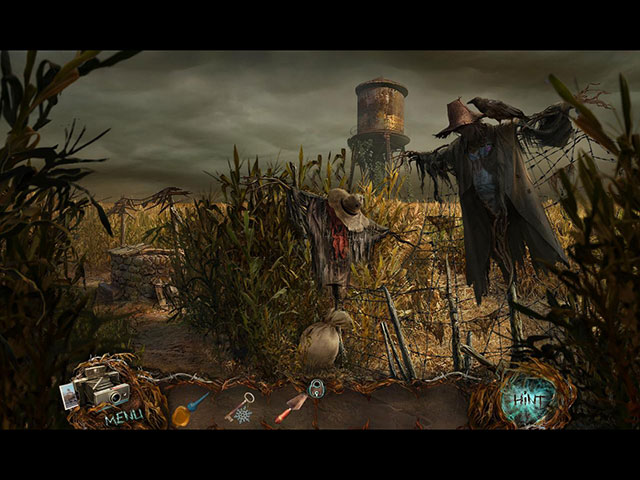 The artwork for the game tries to be photo-realistic, and I don’t think there are any places where the scenery looks fake. That’s good, because the FMV scenes often have characters interact with the scenery. Overall, I’d say about 95% of the FMV was well done.

Sadly, only about 85% of the FMV audio is well done. The Russian actors are clearly speaking in English, and just as clearly, their voices have been dubbed over. Mr. Henderson is probably the best actor out of the bunch, but his first scene is so badly dubbed that you forget he’s trying to be intimidating. As for Mrs. Henderson, her dubbed audio completely disappears in one scene. You’re forced to watch her mouth move for two sentences while nothing comes out. At two other points, her audio is so low that you can barely hear her. Maybe she’s possessed by the ghost of bad soundboards?

I was a little frustrated by the hint button. Say I’m working on the five-step popcorn puzzle, and I use a hint. The hint sends me backwards five screens, in order to work on a completely different puzzle. That’s not helpful! I definitely would have reprogrammed it, so the hint button gives priority to anything that can be done on the current screen. 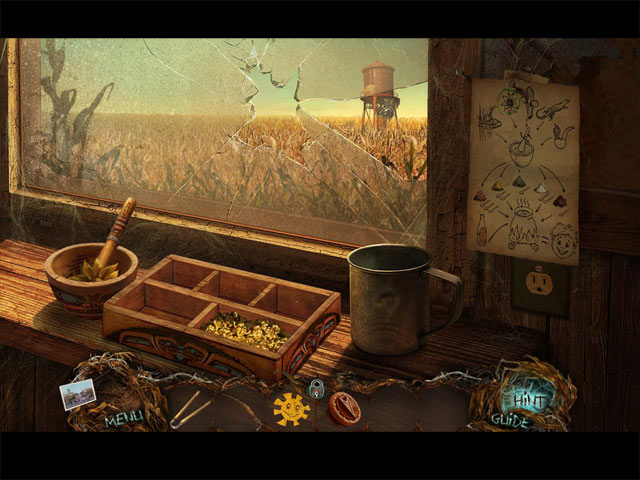 The game is between about two and four hours long, but if you know what you’re doing ahead of time, you can probably beat it in an hour. The more expensive collector’s edition comes with a bonus chapter that makes up a quarter of the gameplay. The bonus chapter takes place nine years before the main game, when the motel was in its prime. I would say that the gameplay in the bonus chapter is just as good as the main game, but the storyline is nowhere near as engaging. After all, you know who the villain is, and you know what’s going to happen nine years from now. It kind of ruins all the suspense.

With an easy-to-follow flowchart!