The Donkey Kong Country trilogy is one of the highlights of the SNES library. Whether you prefer the clever simplicity of DKC1, the piratey theme of DKC2, or the expansive feel of DKC3, each installment has something to love. No discussion of the trilogy is complete without mentioning the tight controls, spectacular music, and cutting-edge graphics that still hold up today (no matter what Jeddy says), but those aren’t under scrutiny here.

Save for a few pops of adrenaline (e.g., mine carts, chase sequences, rocket barrels, and boss fights), the gameplay of the DKC trilogy is characterized by a pacing that is largely determined by the player. Completionists and first-time players can take as long as they want exploring every nook and cranny of every level; speedrunners can find plenty of shortcuts and speed techniques. All this is mostly true of Donkey Kong Country Returns, released well over a decade after the last SNES installment—aside from going a little overboard with the pops of adrenaline toward the end of the game, the game still lets the player control the pacing most of the time. In sickening contrast, Donkey Kong Country: Tropical Freeze is a complete inversion of everything the series stands for, and it makes me upset enough to come out of semi-retirement to write this article.

Did I hear something about coming out of retirement?

Up front, I’d like to say that Tropical Freeze should be an excellent game. The production values are all there, the control is pretty responsive (though decidedly less perfect than in the SNES games), and the game expands on its predecessor (Donkey Kong Country Returns) in a meaningful way. The main problem? Every level is a mine cart level, at least in spirit. Tropical Freeze forces those pops of adrenaline into every single level, to the point where playing the game is like being inside a giant bag of adrenaline popcorn in the microwave. It is utterly exhausting to play Tropical Freeze, and the last few levels honestly make me queasy with how fast-paced they get. 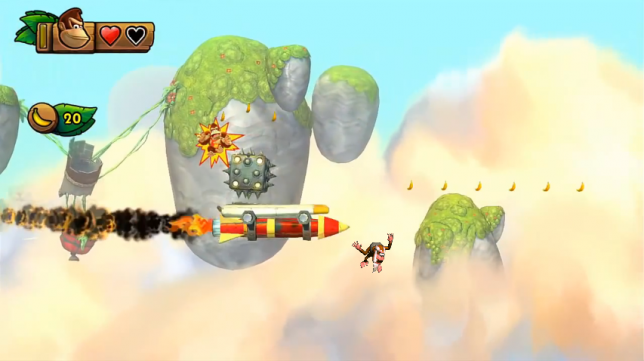 Neveryoumind! Retirement was much better!

Platforms routinely crumble within seconds of you landing on them. Level architecture frequently changes without warning, forcing you to react quickly to collapsing ceilings and solid ground that suddenly appears out of nowhere. Swinging ropes, blast barrels, and other interactive objects have a tendency to fall out of the sky if you wait around too long on them. Then there are the (literally and figuratively) on-rails mine cart levels and rocket barrel levels, plus a couple of levels where you’re being chased by one deadly thing or another. Not even the water levels are safe; after an entire trilogy where the heroes could hold their breath indefinitely, Donkey Kong now has the lung capacity of an airsickness bag and must constantly seek out air bubbles to keep from drowning. 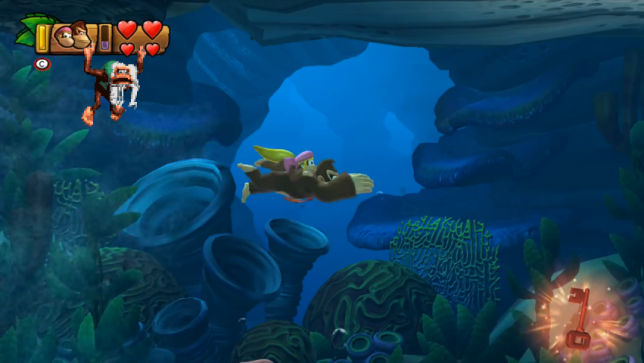 What is this, a breath meter? I haven’t breathed since the late ’80s!

Tropical Freeze is adamant about never giving you a safe place to stand or a moment to rest. In fact, the game is so overpaced that when you can slow down and explore an area, you’re probably so wary of something falling out from under you that you’ll instinctively race past any secrets. The secrets make the problem even worse: whether you’re attempting a bonus room, reaching for a KONG letter before it becomes inaccessible, or collecting a particular group of bananas to make a puzzle piece appear, nearly all the secrets are on some kind of timer. When you only get one shot at completing certain tasks, and when you lose all your progress if you quit a level before reaching the exit, you may need to replay some levels an excruciating number of times to clean up every last secret. 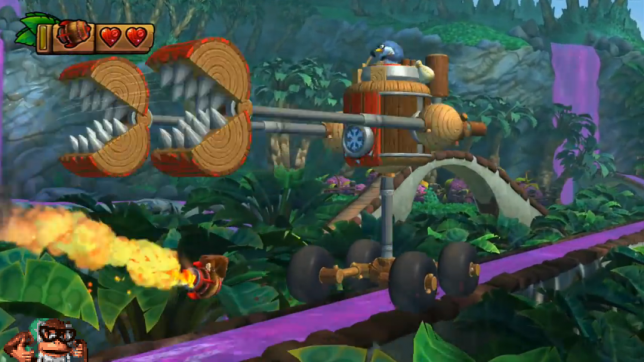 Since when do you need depth perception to play a 2D game? They need to put a warning label on this thing!

Tropical Freeze is layer after layer of speed-oriented challenges. There’s even a built-in Time Attack mode, and achieving a gold medal on any given stage requires an absurd amount of precision. The challenges in the DKC games for the SNES stretch the player to think creatively, visualize complex maneuvers before attempting to pull them off, and learn the unique patterns and characteristics of each enemy and obstacle; the challenges in Tropical Freeze test how long the player can tolerate being constantly in motion. To be fair, DKC Returns is to blame for making the latter gameplay style a bigger part of the series, but Tropical Freeze takes it way too far. 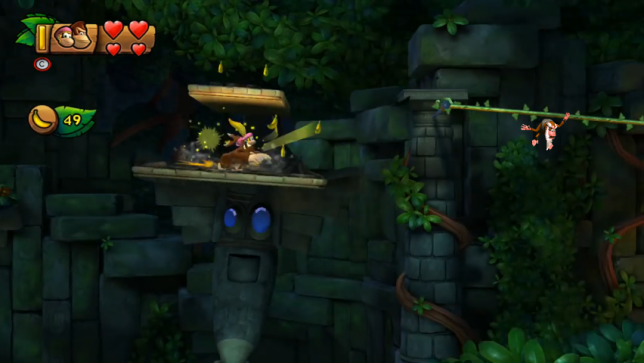 Two levels in, and we’ve already got tilting platforms, zip lines, and trampolines. At this rate, the last level will be so full of nonsense that you won’t have any room to move!

What makes this even more aggravating is that the boss battles in Tropical Freeze are neither like the boss battles in the previous games nor like the rest of the stages in the game. All three SNES games feature bosses that challenge a particular skill, be it hopping across hanging hooks or throwing and dodging snowballs, and the fights are generally over in less than a minute. DKC Returns has battles that are similarly straightforward, but they drag on longer than necessary because the bosses require more hits to defeat. Tropical Freeze retains the longer length of the boss battles, but ups the complexity to the point where every boss feels like a final boss. 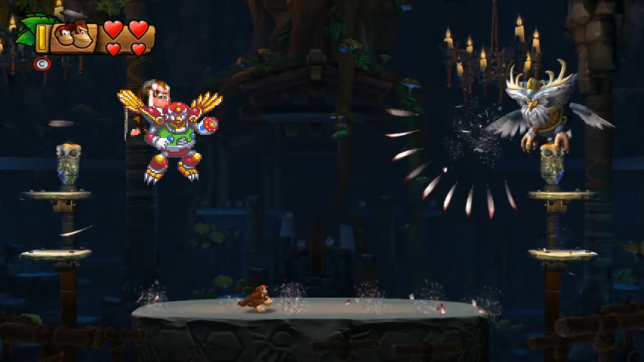 You’re telling me this is only the second boss!? All the bosses in Donkey Kong Country combined don’t have as many attacks as this guy!

The bosses are stupidly hard for a DKC game, made more difficult by the total shift in gameplay mentality—after sprinting through one hectic stage after another, you suddenly need to slow down, plan out a strategy, and wait for an opening to strike. This might work if the bosses tested some of the skills you developed in the preceding levels, but their patterns are all over the place.

Tropical Freeze is thoroughly punishing, and not even the abundance of support items and extra lives can make up for it. I’m no slouch when it comes to platformers, but it’s taken me as many as 30 or 40 lives per stage to collect all the secrets and navigate to the exit. Getting from checkpoint to checkpoint becomes an elaborately choreographed dance, and fudging a single step is usually punishable by death. There is a physical toll on the player from being subjected to so much stress for such long periods of time. And that’s before getting to the secret stages that don’t have any checkpoints, let alone the utterly sadistic Hard Mode. What a horrendous bonus for 100% completion Hard Mode is: do the same things you’ve been doing all game, but more perfectly. 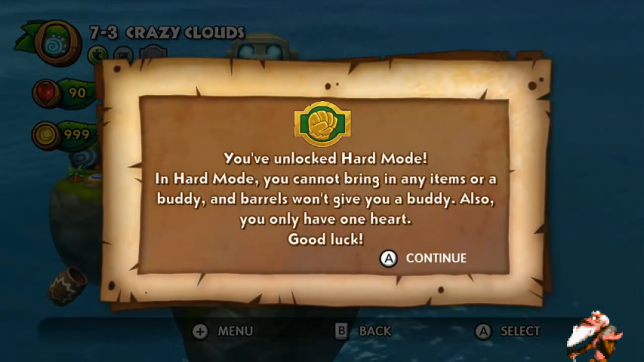 My eyesight’s not what it used to be, but I think this says, “In Hard Mode, you can’t have any fun.”

I’d be critical of Tropical Freeze‘s gameplay no matter what, but when you call yourself Donkey Kong Country, you’re making a promise to deliver a specific type of experience. Tropical Freeze delivers an experience that is, pardon the pun, the polar opposite of what it should be. 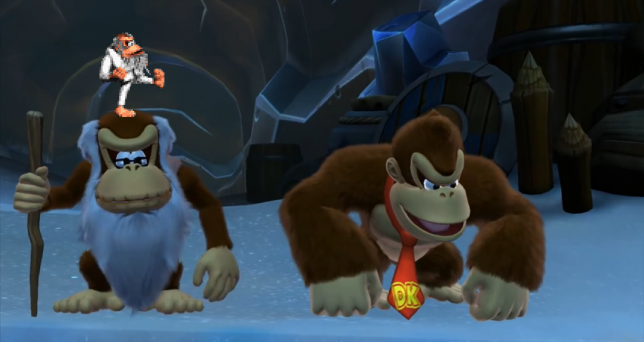 Feh! All these polygons, and they still can’t do justice to my boyish good looks!

For those of you too afraid to subscribe to us on YouTube for fear of TOTAL AWESOMENESS exploding your subscription box, I'm here to tell you not to worry.