Most of the earth has become dominated by mutated creatures.

Long-time GameCola fans know what day it is: It’s October 1, The END DAY. But this is not just any The END DAY—no, this is the 20th anniversary of the day that savage war engulfed the world…civilization was destroyed. What, you don’t remember?

But, there’s more to this tradition than just nostalgia for a classic NES game. There’s more than just ironic enjoyment of an overblown, poorly-translated prediction of a future now decades in the past. It’s definitely those things, but it’s also more.

While I remember renting the game in the early ’90s, for me the story starts in 1996. As the rest of the country was entering the era of the Nintendo 64, I was revisiting the NES and enjoying the later releases like Dragon Warrior IV, Mega Man 6, StarTropics II, and of course Crystalis. It was this timely return that made me stop and say “Wait a second…that’s next year!” I remember writing down a note and sticking it on the refrigerator so I’d remember the date: October 1, 1997.

And I don’t think there’s been an October 1 in the past 20 years where I haven’t at least thought about Crystalis. That first time, I remember making popcorn, playing the game, and checking outside at regular intervals for signs of savage war and mutated creatures. I’d replay the game every few years after that, or call my brother to wish him a happy The END DAY, but it wasn’t until I came to GameCola that I picked it up as a legitimate annual tradition.

But, why Crystalis? Why not any other game that predicted a silly future date that’s now in the past? Why not Mega Man, or Twisted Metal, or Zak McKracken, or Super Smash TV—or outside of videogaming, what about examples like 2001: A Space Odyssey, Evangelion, and The Terminator?

And I think I’ve finally figured out what it is. There’s a certain critical mass required for this kind of thing to happen, and I’ve broken down the key aspects here to help explain the phenomenon.

First, let’s talk about the game itself. Obviously, it has to be a game that people played. To put it more finely, the game has to have been accessible during not only my own youth, but the youths of other people. For most kids, console games were way easier to get than DOS titles, which leaves out all but the biggest PC games like your Dooms and your Duke Nukems. Also, keep in mind that we’d have to convince our parents to get these games. This also generally rules out Japan-only titles and any media that would have been outside of the realm of interest of someone between the ages of 5 and 15.

I almost included this in the “Accessibility” section, but I feel like it stands on its own. When I mentioned that the story has to be within the realm of interest of a “youth”, that means a few different things. The game has to be serious enough to make an impact…but not take itself so seriously as to be boring, and not try too hard to be “dark and gritty”.

For example, even though we know Fry in Futurama got frozen on December 31st, 1999, the show isn’t serious enough to care much about it. On the other hand, while everyone knows that the Second Impact took place on September 13th, 2000, Evangelion is a bit too dark and serious to make a continued celebration of the date the way that we do with Crystalis.

I can admit that nostalgia is a big part of this. That has a specific meaning in this context, however. I mentioned that the games must have been accessible to me during my “youth”, which I’ll define for myself as having a release date vaguely between 1986 and 2001. I include the year of my birth because those games would have still been available to me at a young age, and probably moreso than full-price new releases for the latest consoles (I’m working with an allowance, here). If it’s outside this range, I likely wouldn’t remember it fondly enough to care about its fictional apocalypse.

The importance of the event in question is also an issue. Some games will “take place” in a given year or era, but the specified dates are birth days, founding dates, activation dates, and so on, and usually in the past from the perspective of the game’s story and of questionable importance to the plot.

The big issue for personal importance of the date as that it has to have impact: Apocalypse or bust! Sure, we know the exact dates of basically every event in the Ace Attorney universe, but while it’s cool that the first game took place last year, it’s not worth celebrating every year. The tenth annual Twisted Metal competition took place on Christmas Eve in 2005? Maybe let me know when there’s an alien arrival or something else like that…if the whole world’s not involved, my childhood-slash-adolescent self is less likely to care.

The date also has to be explicitly stated—to the day. Just saying “1999” doesn’t cut it, and definitely not “199X”. The date should also be stated clearly, preferably early on in the game. This immediately cuts down the list, not only removing games like Mega Man and EarthBound, but games like Duke Nukem and Metal Gear Solid as well.

If the date is only mentioned in the manual or I have to happen to look at some calendar on a wall somewhere, I’m not going to care as much as if it was the first thing I saw when loading up the cartridge. And if it doesn’t include the day and month, what’s even the point?

That’s right, this category is back! You may have wondered to yourself, “Jeddy,” (that’s you wondering) “Why does your youth only extend until you were 15 years old?” Excellent question!

… Oh, you wanted an answer? I only include up to 2001 because the date of the apocalypse also has to have happened during my youth. That’s the double nostalgia of a nostalgic game and a nostalgic fictional apocalypse! This removes a lot of games for having dates like 2010 or 2020 (or even worse: before I was born), and also games that were more “contemporary apocalypse” than “future apocalypse”, with release dates only a year or two away from the purported end of the world.

These aspects all combine to bring us where we stand today. Crystalis is a game from my youth, that I fondly remember, proposing a total apocalypse also during my youth, with an engaging and enigmatic (but not too grim) story, that was reasonably accessible to others around my age.

Pulling it all together, the final factor is just GameCola itself. The site has provided a meeting place for “people born in the mid-’80s with access to the Nintendo Entertainment System and an interest in fantasy role-playing games”—not to mention, a platform for those people to discuss their interests and form their own traditions. Without GameCola, The END DAY would just be an in-joke between my brother and me.

And maybe that’s the truth that’s been hiding here the whole time: That the real The END DAY is the friends we made along the way. 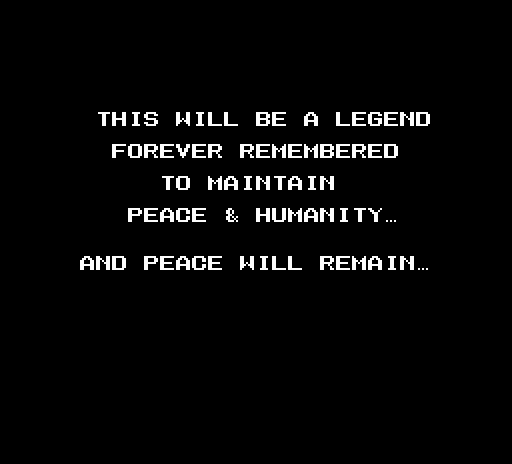