The PlayStation Vita is the most beautiful thing I own. It is sleek, and it shimmers in the daylight. The curved edges and comfortable dual analogue sticks are both ergonomic and stylish. This treasure cost me an arm, a leg and all my savings. But was it all worth it in the end?

You Bet it Was Worth it.

Although the selection of games has only just started to improve, one fantastic summer release last year stapled the PlayStation Vita firmly as the new best handheld console to own. Gravity Rush is by far the most incredible portable game released so far and it justifies the purchase of my PlayStation Vita.

Gravity Rush tells the story of Kat, who is a young woman with gravity-shifting skills. This means that she can control gravity and use it to her advantage. Well, with the help of her magical cat sidekick Dusty. This is what makes the game so instantaneously brain-shattering, though we’ll delve into that in a moment.

Kat’s got amnesia. She doesn’t know who she is, where she came from, or anything like that. However, she decides that she’ll use her powers to do good deeds. It’s your job to help Kat find out who she is, what her purpose in life is, and also to count how many times the game director thought it would be cool to show Kat partially naked in a comic book sequence. Also, finding out what’s up with the town of Heksville and why it’s a bunch of rocks floating in the sky would be useful too. 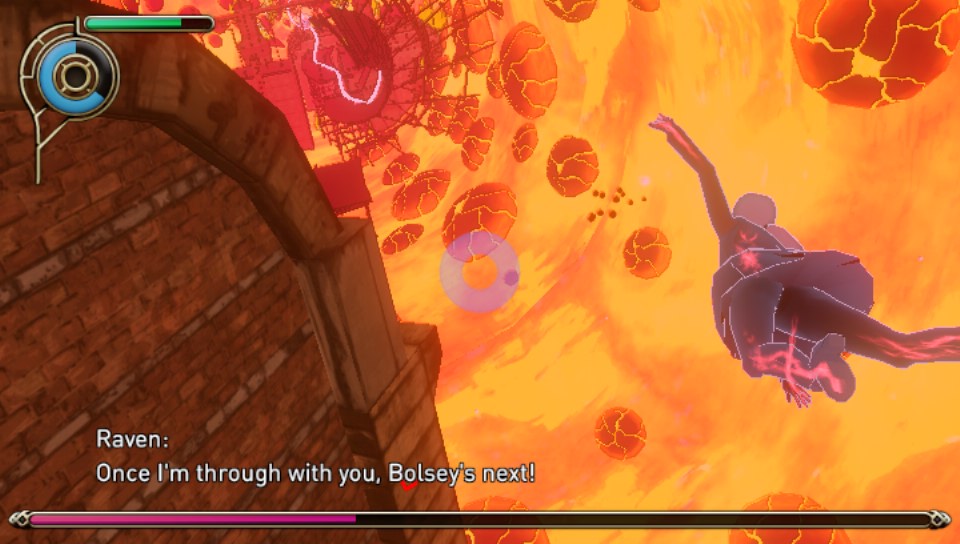 The missions are dotted with amazing comic book and video sequences that tell the action. Most of the story is told through written dialogue, which is composed in a convincing manner. Kat seems to be a very bubbly character, up for most things, and she has a strong sense of justice. She is a character I am happy to be learning about, and I became invested in her story. Each mission reveals more about her past, so I found myself itching to jump into the next mission to discover more.

Which is where I went wrong. Don’t rush this game. There’s purple gems dotted around the game worlds, and you’re going to want to collect most, if not all, of these little blighters. Doing so gives you the fuel to upgrade your base skills and special moves, which will make Kat suck less when you go head-to-head with a big bad monster at the end of a mission. 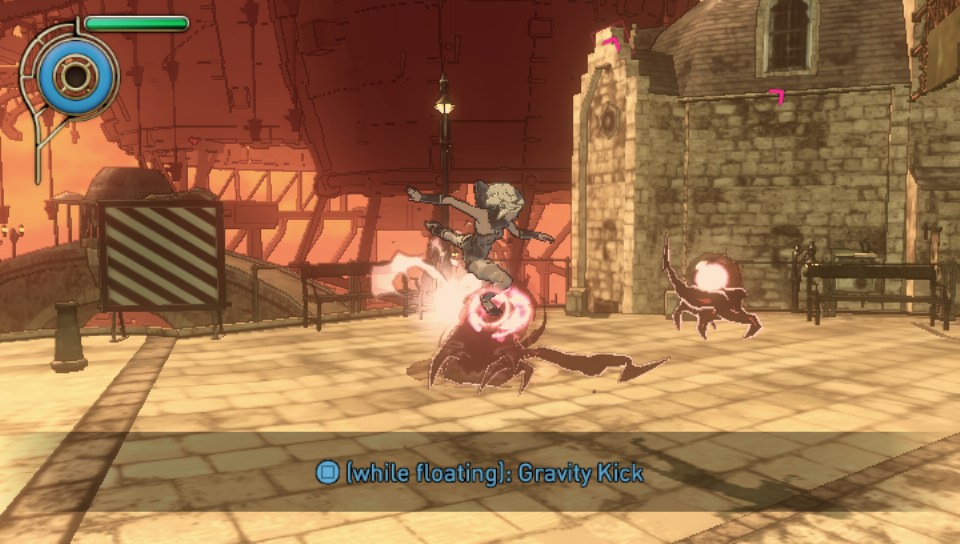 It was when I was progressing through the game that I started to become impressed with its size and scope. Yes, we’ve had whole Grand Theft Auto cities on our portable consoles, but the world of Gravity Rush is a freakishly tall and wide environment. You can free-fall thousands of yards, fly around in crazy motions, stand upside-down on the underneath side of a building or slide across planetoids and curved objects. Each small town area is packed to the brim with fun surfaces to climb and many gems to collect. There’s nothing more satisfying than that…at least, until you get to the combat.

When the fighting in a game constitutes as just button mashing, you would normally disregard the system as rubbish. Not in Gravity Rush. Oh no. Kat can somersault and kick and slide into enemies with the force of a tiger who’s just been released from captivity. We’re talking the kind of eagerness that focuses on the consummation of flesh and blood.

If that doesn’t cut your mustard or toast your muffins, the gravity shifting is utilized within combat too. Kat can fly toward enemies with a power kick, create a cyclone, launch objects like a catapult and even generate a titanic black hole which she uses to absorb and immediately eradicate enemies. It’s almost like the combat takes place across four dimensions. 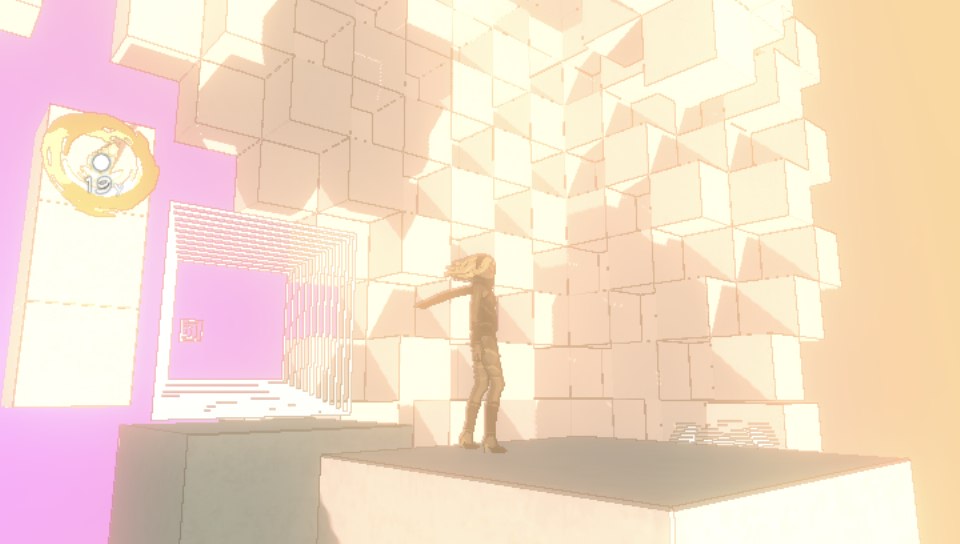 Her motions are like watching cordial melt into water. She’s as fluid as a real cat, which is obviously a deliberate and conscious decision. Everything is deliberate; Gravity Rush is an immense and gigantic picturesque work of art. It is a challenging game, too. If you immerse yourself in the environment, story and “soul” of the game, you’ll experience something truly astounding. This is the first game I’ve played on the PlayStation Vita that actually feels like a console game. This is the caliber of content I’ve been waiting for and dreaming of.

Story wise, this game is even better than the almost unbelievable graphics or the impossibly colossal environment. There are more twists and turns in this narrative than on the Big Hand racecourse in F-Zero X. Every now and then, the game threw me completely off the scent. Something zany or unfathomable happens, which then re-imagines and changes the focus of the entire game. You’re stuck confused but determined to roll with it, and then you get your answers. Well, most of them. And as you’re waiting for the next reveal, everything is once again thrown into disarray.

The ending basically says, “We want to make a sequel.” I’d have rather they’d given me more answers, but I guess that and the loading times are the only negatives. 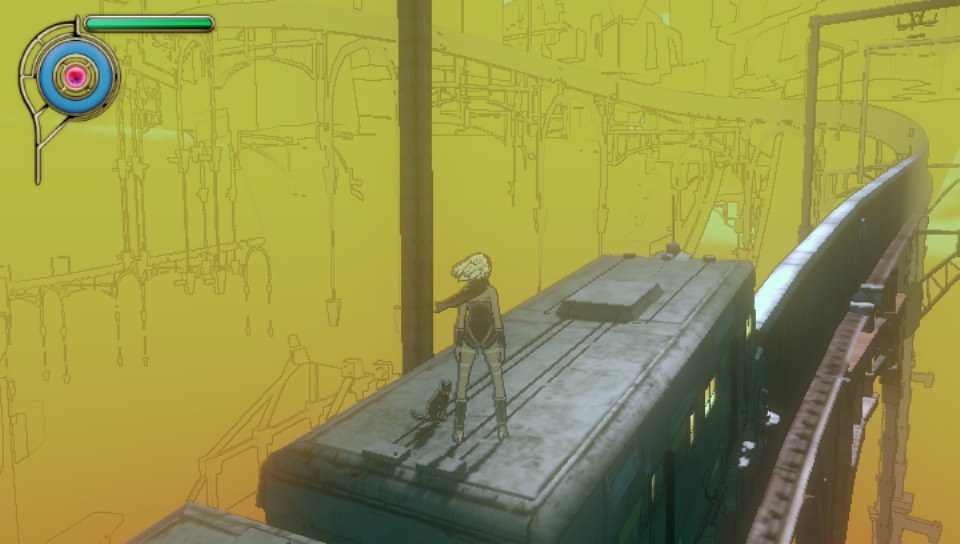 This impenetrable, finely tweaked, miniature godsend needs to be experienced, loved and cherished. It’s a game that defies and defiles expectation by being one of the most incredible experiences I’ve had on a portable gaming system. Having the ability to put the handheld into sleep, and begin seamlessly from where I left off, makes this story-driven treasure a complete game-changer. Fighting games? No. Racing games? No. Puzzle games? No. We’ve found what the PlayStation Vita was made for; now let’s take advantage of that. Full-on and fascinating single-player experiences just like the old days of gaming.

Gravity Rush is a pocket paradise and has raised the bar so high that I can’t wait to see the opposition. I doubt I can be amazed much further by any other portable game in the future.

Everybody's got at least one videogame they've always wanted to see. What's yours?