Michael Gray is a current GameCola staff member who writes The Ten Reasons, in which he discusses ten reasons why he likes or dislikes a particular game; Inside the Guide, a column about the art of writing guides for videogames; videogame reviews; and occasionally other columns, such as The Grass is Always and Pimp My ‘Cola. He also edits GC articles, and he participates in and sometimes edits The GameCola Podcast. He’s also well-known by twelve-year-old girls around the world for his Nancy Drew video guides on YouTube. This is his third appearance in Versus Mode, having written previously with Brian Vanek and Christian Porter.

Gregory Gay is an Editor/Writer with 4 Color Rebellion, a blog that focuses on nerd culture as a whole, including videogames, movies, and comic books. Like GameCola, it strives to be a “fun” site, not just posting the latest news but lettings its writers’ own voices and opinions shine through. 4 Color also supports gaming culture specifically by publicizing related creative efforts of any kind, like artwork and independent game development. This is Greg’s first appearance in Versus Mode.

1. Online gamers should be required to use their own names as their characters’ names.

Michael: Realistically, I don’t think this will work because there are too many people with identical names. Michael Gray is a common name, and I can never register my name as an e-mail address anywhere, because all of the e-mail sites have a few thousand Michael Gray screen names already.

Sideways. So I say boo on China for being an oppressive, totalitarian government.

Greg: Such a rule would never fly outside of China. I mean, isn’t that the entire reason that we have the abominable “friend code” system on Nintendo consoles? To protect the children from large Italian plumbers? Even ignoring the overprotective parent segment of the market, you’d have to get it past the privacy advocates, LARPers, and trolls that cover the Internet.

Even if you ignore the fact that most people want privacy, there is the more fundamental question of “why?” Why should gamers be required to use their own names? I honestly don’t think it would make a difference. Online douchebaggery won’t disappear overnight. There are plenty of assholes on the Internet who post under their own names. I understand why China wants to ban anonymity, but most of us don’t live in vaguely oppressive nations, and there just isn’t a reason to enforce such a rule.

2. EA charging for an “unlock everything” code in Skate 2 is reprehensible.

Michael: Q: How do you stop a bull from charging?

A: Take away its credit cards!

Greg: EA selling an “unlock everything” code isn’t reprehensible. Reprehensible would be selling magical, missile-launching skateboards. Seriously, as long as EA isn’t selling anything that breaks the balance of the game, I don’t see an issue.

Would I buy an “unlock everything” code? Hell no. I’m kind of a purist. I want to experience games as the designers intended, and I don’t mind working for the extra characters and levels. However, if someone else doesn’t have that kind of free time, they might as well toss a few extra bucks in EA’s direction.

You know what would get my panties in a bunch? If EA pulled a Namco and started charging for content that was already on the disc. That is one of the most disturbing trends in the gaming industry right now. If EA decides to charge you 200 points per skater in the inevitable Skate 3, we’ll have an issue.

Michael: Yeah, it’s questions like these that are the reason I don’t read Versus Mode all that often. Who’s Bob? What’s this game of his? Why won’t Nintendo let Bob publish it? I suppose I could click the link and read the story to find out, but that’s actual work.

Greg: I think Bob kind of screwed his chances when he decided to pull his massive publicity stunt, so I’m going to drop “Bob” from this and substitute in “indie developers.”

Should indie developers be able to get development kits? Sure. Nintendo does own a closed platform, so they have the right to enforce a few ground rules. However, if indie developers meet the requirements, why shouldn’t they be allowed development kits? The huge stumbling block is the publisher. Developers need publishers, and indie developers generally lack them. Pressing thousands of physical discs or cartridges is expensive and labor-intensive. You need a publisher to even make that possible. This is why the indie guys gravitate toward download services. You don’t need a publisher if the player is just downloading your game.

In the end, this is what prevents most independent developers from getting development kits for systems like the Nintendo DS. If you don’t have a publisher, there’s no way that you’re going to be able to put out thousands of carts. If you can’t actually release your game, why is Nintendo going to give you a development kit?

Michael: I agree. Faking a screenshot is wrong because it’s false advertising, which is a form of lying. Lying is bad.

But speaking of screenshots, I understand Lizo has given testgame a graphics makeover. Check out this new photo of Artie the Grumpy Kilt Man: 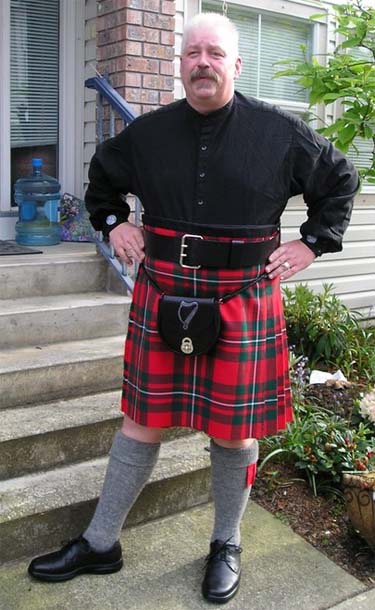 And here’s a photo of Lily:

And of course, a photo of Paul:

Greg: Pop quiz—what is the opposite of truth? That’s right, lies. Quiz number two—if someone hands you a fake screenshot and tells you that it is actually from a game, what are they doing? Yep, they are lying.  Now, kiddies, is lying wrong? Unless you work at Activision (Call of Duty), EA (Madden) or Sony (Killzone 2), the answer to that question is probably yes.

Doctoring screenshots is a bold and direct lie. It’s not only immoral, but downright condescending to the customers that can tell the difference between a real game and a “target render” (aka: the customers with eyes). That Activsion is hiring someone for the specific purpose of making fake screenshots is pretty damn disgusting. As a gaming journalist, knowing that they employ someone to make up bullshots will forever shadow any prerelease coverage of their games. Why the hell would I pass on screenshots to the readers knowing that they may be fake?

5. Violence and gore don’t make a game any more fun.

Michael: Of course they don’t. And sorry, Phoenix Wright series, but neither does excessive cleavage.

I don’t have a problem if violence or gore is in a game, provided that it’s justified. I had no qualms with the ending in Legend of Zelda: Ocarina of Time, where Ganondorf coughs up blood while dying. It seemed realistic to me, and it did a good job of showing that Ganondorf was near-dead. So I guess what

I’m saying is that you can have unpleasant things in a videogame, but there should be a good reason behind it.

Greg: Sure. Good gameplay is what makes a game fun, and the last time that I checked, gore has nothing to do with the gameplay. Would Pac-Man be more fun if you were running around a maze of intestines and eating eyeballs? Probably not.

Violence is potentially a different story. The presence of violence may have an effect on the “fun factor.” Like, a puzzle game doesn’t require violence to be fun, but Devil May Cry just wouldn’t be the same without any fighting.  So, some violence is necessary in certain types of games.

With that out of the way, does an increased level of violence make a game more fun? That is more questionable.  Mortal Kombat is unquestionably a more violent game than Street Fighter. Even if you remove the blood, Mortal Kombat is a more brutal game. Is it more fun that Street Fighter?  In my opinion, it isn’t. So, we’re back to the beginning. Fun games have good gameplay. Entrails and brutality don’t really affect the gameplay. End of story.

Jenna Ogilvie offers advice about sweating at night, going to college, and more.