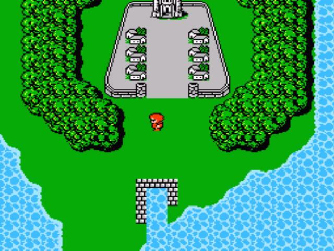 Nathaniel Hoover: Back when plumbers were pixilated and games were games. *sniff* Can you smell that? It smells like nostalgia.
Meteo Xavier: That is actually catering, umm…
Nathaniel Hoover: I can taste it from here, and now I’m not hungry.
Meteo Xavier: Aha. Now Nathan, tell us a little bit about this game. There are about…two…people left in the world who aren’t familiar with it, and we’ve actually got them in the studio today; they’re in the audience.
Nathaniel Hoover: I’d be delighted to. ::ahem:: Here is the story I was told by the sages at the lake (audience woos and reacts for a minute). Hey, shut up! (audience laughs). OK, I’ll do my best to recount the tale…
Meteo Xavier: Please do.

Nathaniel Hoover: Once upon a time, there was a down-on-its-luck company called Square. In a last-ditch effort to turn a profit before they went under, they released a humble game that was their last hope of survival—their final fantasy, if you will.
Nathaniel Hoover: So far so good?
Meteo Xavier: Yeah! Continue…
Nathaniel Hoover: I don’t have to tell you how successful Final Fantasy became. But Square’s last hope was different from the Final Fantasy we know today. It was a simpler game: a band of four heroes, the Light Warriors, setting out to rescue a princess and then recover the four orbs that could bring balance to the land. And, of course, there is a Dark Elf. There’s always a Dark Elf.
Meteo Xavier: And from there it expanded from simple fantasy…to Final Fantasy. You got to do more than fight elves and dwarves and ogres; you were fighting soldiers who came back from the dead IN THE PAST…I think, and trying to wrap your head around the prophecy of a time-loop that…in its own structure couldn’t have been a prophecy because past, present, and future were all… mashed up like a human potato.
Nathaniel Hoover: Like a bizarre, 8-bit Mr. Potato Head, but with more swords.
Meteo Xavier: Kick-ASS swords.
Nathaniel Hoover: Right you are.
Meteo Xavier: And…somehow this game became a phenomenal success that rebuilt Square into Squaresoft, and further into Square Enix.

Nathaniel Hoover: Well, I wouldn’t totally agree; after you got past using lunkheaded commands like STAIRS to operate things that should be operated simply by pressing A, there wasn’t much more to Dragon Warrior than attack, heal, cast a spell, and run. Final Fantasy has a more complicated magic system and more (read: any) options for tricking out your characters.
Meteo Xavier: But you’d definitely agree with me that the basic outline of the game was just more efficient. More lubricated—gak. You didn’t have to fucking command a door to open, or stairs to ascend; you could actually walk up and through. You didn’t have so many…umm…stumbling blocks to go through just to walk through town…
Nathaniel Hoover: Yeah, speaking of stumbling blocks…
Meteo Xavier: Oh fuck you, dude. (Everyone laughs, and, as Meteo jumps up on the chair to simulate said fucking, the audience goes wild. Meteo calms down along with everyone. Applause.)
Nathaniel Hoover: Well, in that regard, sure (aftershock laughter), Final Fantasy was easier, definitely. I seem to recall I couldn’t figure out how to exit the first room of the game in Dragon Warrior for about a year, so here’s a point in favor of Final Fantasy. 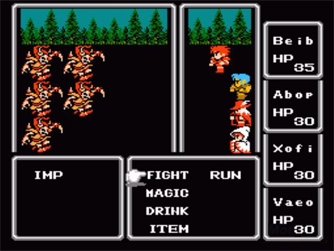 Meteo Xavier: Yeah, Final Fantasy was no Dragon Warrior, but it was still a bitch to play through. You didn’t get Phoenix Downs or LIFEs. You might’ve gotten a LIFE spell if you were smart in what you picked beforehand. There are no save points. There are no ETHERs—no MPs, for godsake. Hell, you want to hear something funny?
Nathaniel Hoover: Do tell.
Meteo Xavier: The first few times I played Final Fantasy, I didn’t know you had to MANUALLY equip your weapons.
Nathaniel Hoover: ……….whaaaaat? (audience laughs)
Meteo Xavier: I had a Black Mage with 4 Wooden Nunchucks doing 1 DMG to an IMP and I was like “What the fuck is this?” And I was like 8 at the time and Grandma was watching me and it all just spiraled from there. So yeah, I had some memories of that game.

Meteo Xavier: What did you really enjoy about this game?
Nathaniel Hoover: Getting to pick out spells and equipment, traveling to new locations, meeting colorful locals, skewering them with my rapier—that kind of thing. You?
Meteo Xavier: Well, I mostly got my jollies playing this game after I played through Final Fantasy II. FFI halfway resembled FFII, so I got to playing it, and sucked until I learned I had to manually equip and then I got further along the game and… it just progressed really well. The storyline and gameplay combined to create these waves and crests that are just classic old-school gameplay. Plus, that soundtrack killed.
Nathaniel Hoover: Truer words have never been spoken. Loved the music. The original Final Fantasy was actually the first in the series that I ever played; I got it as a birthday gift back in elementary school. Probably the reason I like RPGs at all.
Meteo Xavier: …Matoya’s theme.
Nathaniel Hoover: Good tune, man, good tune. I was always partial to the Temple of Fiends (both versions), but the overworld and battle and victory music are all timeless… And the Volcano!
Meteo Xavier: Temple of Fiends, man. That song will teach an 8 year old to masturbate.
Nathaniel Hoover: Sounds like you have some experience with that.

Nathaniel Hoover: Oh yeah. I also really dug a lot of the towns. The pirates in Pravoka; Crescent Lake; Lefein…
Meteo Xavier: Shit, my mic stopped working, let me… ::leans really close into Nathaniel::
Nathaniel Hoover: Oh, what’s that, you say?
Meteo Xavier: I said…oh fuck it; he can’t hear me without the mic… Where is…
(The mic is clipped to Nathaniel’s pants, and the audience starts giggling.)
Meteo Xavier: Oh, by the way, Happy Birthday, Nathan! (Audience laughs as Meteo simulates fellacio for a split second.)
Nathaniel Hoover: (Smacks Meteo upside the head.) Whoa now! I knew you were up to something funny over there. Still thinking about the Temple of Fiends music?
Meteo Xavier: Well one of us is, that’s for sure. 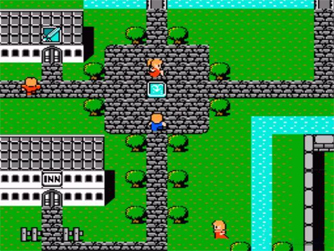 Meteo Xavier: Anyway, least favorite? Almost everything BEFORE that.
Nathaniel Hoover: My least favorite: The Marsh Cave. Dungeon’s way too long for such a low-level party to go through without save points.
Nathaniel Hoover: Also, I think you should keep your mic clipped to your pants. I think the audience would laugh more at what’s down there.
Meteo Xavier: (Frowns) Yeah, it’s true… Umm, the whole first half of the game after Garland is a giant, 80s RPG hardcore fuck. The bosses and dungeons are almost unmanageable, and the equipment is way too damn expensive…and ASTOS owns the first half of the game.
Nathaniel Hoover: Without a doubt.
Meteo Xavier: And hell, what the fuck is up with that volcano? It’s like 13 dungeons rolled in one. No maps, hot tiles—that about killed the game for me there. You couldn’t tell what was safe or coming up, and when you get to the end boss there, she kills you! She’s a fucking fire esper, and she’s not weak against ice!
Nathaniel Hoover: Like I said, style-wise I like the volcano, but actually playing through it…I musta gone through all my potions just exploring the place.
Meteo Xavier: And then the ice cavern was like salt rubbing into the wounds…
Nathaniel Hoover: That was brutal. But that’s where we learned the value of excessive leveling up, a value that is continually instilled in us, game after game.
Meteo Xavier: But after that it was all up-hill, right? Even TIAMAT was simple compared to earlier standards.
Meteo Xavier: And that’s why FINAL FANTASY is awesome: it knew how to play with an audience, and it still does today.

Nathaniel Hoover: I’ll toss another one your way: Best boss fight? That is, most challenging or satisfying?
Meteo Xavier: Heh…fuck, I don’t think any of them were satisfying. What about you?
Nathaniel Hoover: Really? I know KRAKEN was a disappointment (I tend to like the underwater stuff, so this made me sad), and LICH was just challenging, and KARY was hard, but I still contend that WARMECH is awesome, despite the through-the-roof difficulty, and TIAMAT isn’t half bad if you fight him honestly. Come to think of it, there really weren’t that many boss fights in the original, were there? Bosses are a dime a dozen now, but back then, it meant something to go up against a boss.
Meteo Xavier: Oh, I agree.

Meteo Xavier: Well, we’re about to run out of time. Closing comments?
Nathaniel Hoover: Point of contention I want to quickly clear up: What gender is the white mage?
Meteo Xavier: NES version? Male. Beyond? Anything the fanboys want to think.
Nathaniel Hoover: Male. Precisely. Thank you.  No, all I have to say is that, though I haven’t played all of them, the original Final Fantasy remains my favorite in the series by far. The elegant simplicity, fantastic music, and tough challenges really hit their mark. Excellent game.
Meteo Xavier: I agree. The game is a pain in the ass, but it actually redeems itself later on. That Time Loop thread was a genius, if vague, way to end a game that would NOT be just a final fantasy.

[Bored? Go behind the scenes and read the original, unedited version of this article!]

Progress is what we're all about here at GameCola, by which I mean you should check out the neat stuff I've been adding to the site lately. And by "neat stuff" I'm only really talking about two things ...