Staff writer Michael Gray, who may also be a ninja, somehow managed to acquire an exclusive copy of the demo for Ace Attorney Investigations: Miles Edgeworth. Please note that this demo only counts as an exclusive copy if you don’t know that it’s available for free. 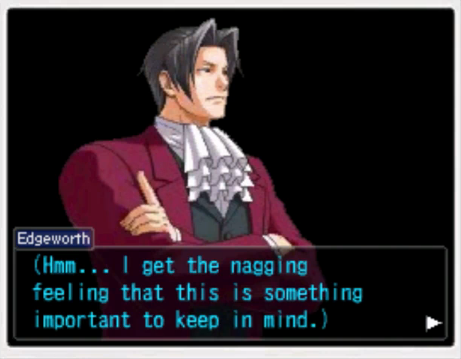 Anytrial, Michael has been kind enough to do a video walkthrough for the demo. C’mon, folks; let’s give these videos lots of good ratings and nice comments. With enough encouragement, maybe Michael will give us a video walkthrough of Apollo Justice: Ace Attorney. A video walkthrough that will probably consist of Michael tossing the game into a garbage can and then fishing it out to play it, but still.

You can watch the entire playlist of the Ace Attorney Investigations: Miles Edgeworth demo on the GameCola YouTube channel, but there are already too many hyperlinks in this post as it is. Why don’cha just watch everything right here? I mean, it’s only three videos long; it won’t kill you. Unless your name is Detective Buddy Faith, in which case you are totally the victim in this demo.

So this month's edition of testgame.exe: Making the Adventure (the making-an-adventure-game monthly article that everyone knows and loves) is gonna seem pretty run of the mill in most aspects.  First