Tales of Monkey Island: The Trial and Execution of Guybrush Threepwood is the Mostly Harmless of this series. By saying this, I don’t mean, specifically, that the designers decided to off the main character’s soulmate in a random aside, then end the game by killing off every single other character we’ve ever met. (Spoiler alert.) I just mean that this game is noticeably darker than the others in the series so far—not only in terms of the story, but also in terms of the puzzles, the inventory items, and also literally, considering that the game takes place entirely at night. I don’t want to give you the impression that this is a game you’ll be afraid to play with the lights turned off—it’s still playful, still has witty repartee, and still has wacky cameos of characters from the original series—but it also adds a Whedonesque element of “don’t get too comfortable, because bad things absolutely can happen.” (Hopefully, Telltale won’t be ruining this in the fifth game by also introducing a Whedonesque element of “just kidding! The bad stuff you thought was permanent totally wasn’t, and everything’s happy again,” because  SERIOUSLY JOSS WHEDON, STOP RESURRECTING EVERY SINGLE ONE OF YOUR DEAD CHARACTERS. IT IS LAME AND IT RUINS ALL YOUR DEATH SCENES.) 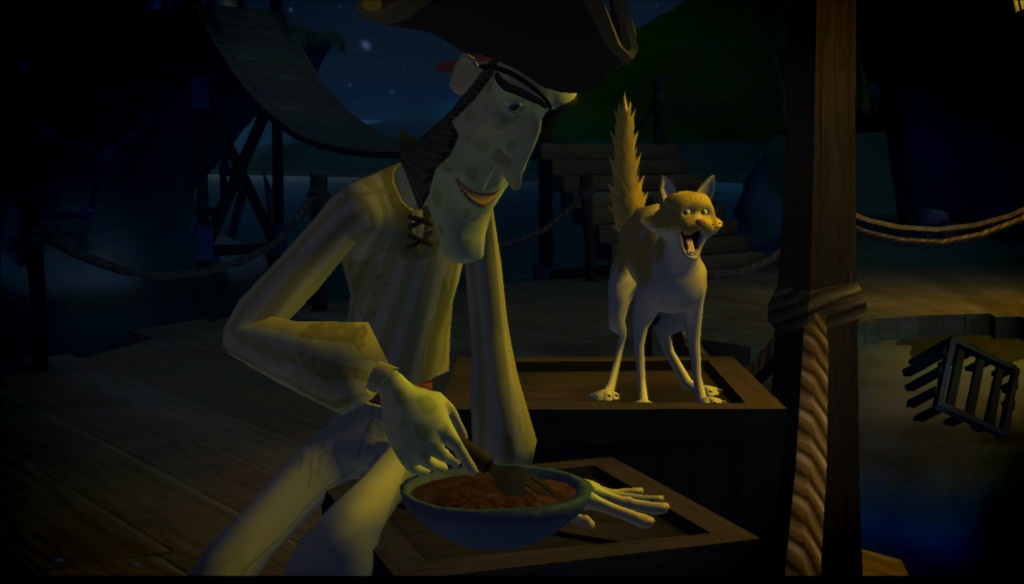 But enough of my…impress-ed…ness…with the turns this game has taken. What—you might be asking, if you skipped my last three reviews and have no idea what a Monkey Island is—what, exactly, is this game? I’ve gone over this a few times now, but the core gameplay of these point-and-click adventure games involves exploring environments (in this case, an island in the Caribbean), stealing random items (in this case, for example, bacon grease), and using them to solve puzzles (such as winning your own trial and preventing your own execution). You also sometimes have to talk with people in order to progress the game, convincing them to do things, or obtaining items from them. If you mostly play videogames just to shoot people, because you’re a goddamn psychopath, these games won’t be for you; but, if you think you’d like using your mind to try to deduce how to use a seemingly random collection of items to get from Point A to Point B, you’ll almost definitely enjoy this game.

Of course, if that’s the boat you’re in, and you haven’t played any of the TMI games yet, you probably shouldn’t be reading this review right now, considering that this is the fourth game in the series; I’m guessing you wanna start with the first, instead. TMI is an episodic series, meaning that its games are short, cheap, and inextricably tied together; if you’re going to play them at all, you’ve gotta start from the beginning, and play them in order. This is even more essential for Trial and Execution than it is for any of the previous three, as this game takes place in the same setting as the first game, involves characters from all three, and asks you to remember who they are and what you’ve done with them in the past.

Which was kind of a problem for me, actually. I’ve been following these games as closely as anyone, but nearly all of Telltale’s new characters have been running together for me. Few of them have distinctive appearances or personalities—a flaw common to a lot of Telltale Games’s games, actually, as the company seems to have difficulty creating unique and/or interesting characters, generally relying instead on stereotypes and tropes to pass them off as people. (GameCola writer Elizabeth Medina-Gray mentioned in her review of the first Wallace & Gromit game that she’d be interested in seeing Telltale create an all-new game, instead of using an already-established franchise; after playing TMI, I’m a little wary about this, because Telltale really seems to struggle with finding identities for characters it’s made up on its own.) You’re pretty much guaranteed to scratch your head a few times, wondering, “was this guy the journalist, or the action figure fanboy? Or was he the guy playing bongos….”  It’s surprising to me that the company that gave us Morgan LeFlay, and the Soda Poppers from their Sam & Max games, also came up with so many cardboard cutouts in this series. 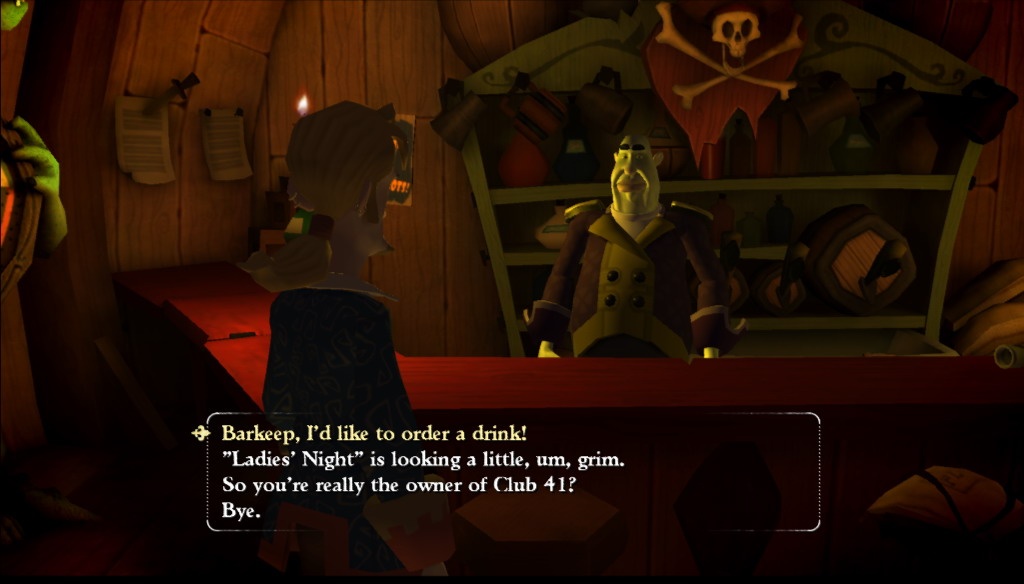 Speaking of things I’m perhaps unfairly critical about, I noticed something else in this game—the puzzles are sometimes telegraphed, by which I mean that you’ll figure out the solution to a puzzle before actually figuring out what the puzzle itself is. This seems like something that would come up in adventure games a lot, but I’ve only really been noticing it in the TMI series, and in this game in particular. For example, you’ll find a pile of metal shavings, and a monkey that’s magnetic, so you know you need to use them together at some point. Or you find a machine that can have strange effects on Guybrush, but only one of those effects doesn’t reset itself after about a second, so you know that’s the effect you’re gonna need later to solve a puzzle, whereas the others are just there for fun. Or, when you’re talking with someone, you have like fifteen dialogue options to ask for that person’s jacket, so you know you’re going to need to get his jacket at some point—even though that point doesn’t come until much later in the game. Maybe this was Telltale’s intentional way of trying to make the game easier, or to lessen the game’s frustration factor, but it takes some of the fun out of solving a puzzle when you can solve it that easily and so much sooner than you need to. This is especially problematic in an episodic game, which, fundamentally, is going to be easier than a full-length game. There are only so many places you can visit and so many items you can pick up in the 6 hours or so that this game takes to complete, and since there isn’t a ton you can do, that means that there aren’t a ton of possible solutions to puzzles—it’s the difference between a multiple-choice question with 30 possible answers, or one with only three.

Also in this game’s “cons” column are its controls, which I strongly feel are the worst thing ever to happen to videogames, but I’ve already gone over that several times now. I also really hate that the antagonist of this series has been an obnoxious French-person stereotype, whose only redeeming quality in four games was one funny line toward the end of this game.

In the “pros” column is, of course, the game’s plot-twisty story (including a continuation of the love quadrilateral from the past few games, and the now expected cliffhanger), and the game’s sense of humor. The puzzles are equal parts challenging and entertaining, except for one, which I thought might have been a glitch, to the point where I had to look up a walkthrough to confirm that I hadn’t broken the game. The game is also deceptively long, particularly for an episodic game. I said that it’s only about six hours, but more than once I thought the game was over, and was ready to complain about how ridiculous short it was, but then something crazy happened, and all the sudden I was actually only part of the way through.

The game also has incredibly moody music. Not moody like teenager moody—moody like something that sets the mood really well. Moody. Mood mood mood. (I’ve been getting at trouble at work lately for allowing too much word repetition in the reports I edit; this is my way of getting it out of my system.) It’s not a Chrono Trigger kind of good soundtrack; rather, it’s the kind of soundtrack that adds to the game’s atmosphere without drawing attention to itself. The songs are kind of indistinguishable and melt into the background; but I think it’s exactly this that makes them excel. 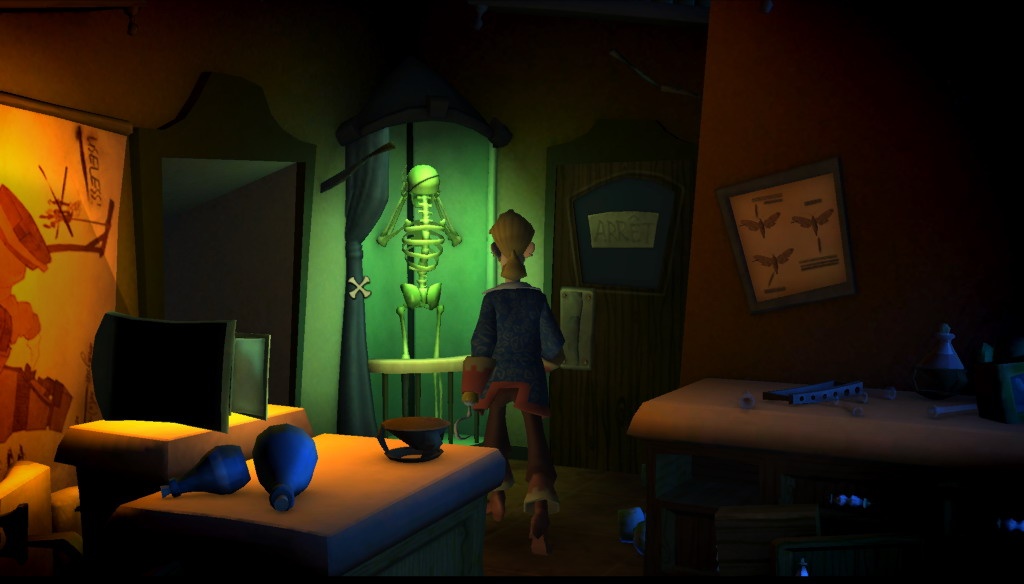 While this game, like Mostly Harmless of the Hitchiker’s Guide trilogy, is definitely the darkest, it’s not, like Mostly Harmless, a total downer. It’s a total fun-er. You’re doing yourself a disservice if you don’t at least check the TMI games out, and, if they sound fun to you, you’re doing yourself an even greater disservice if you don’t give Telltale Games lots and lots of money to support them in their comedy adventure game endeavors.

Michael Gray plays Shining Force: Resurrection of the Dark Dragon using only magic users. No, he doesn't get past the second chapter.