Rock Band titles have always been moderately superior to the competition, showing a layer of varnish and shimmer that is lost in Guitar Hero’s latex and bondage gear. That doesn’t mean the competition is any less fun, though; and anyway, even Rock Band has been hit and miss in its installments. We tried to ignore the Track Pack discs released in stores because they were just absolutely dreadful—thirteen or so songs, and a wad of deceptively tricky gamerscore that only someone like my brother would be able to squeeze out of the game.

I’m a Platinum Artist in Rock Band 2 (translation: “awesome player,” or “sad fool who played for seven hours nonstop as if he had something to prove”), and even I have immense trouble with the AC/DC Live Rock Band songs because they go on forever and have lots of parts that go “diddly diddly.” Thankfully, the proper band-centric Rock Band titles are much, much better.

The Beatles and Green Day are the best bands ever to walk this Earth, and I’m glad Harmonix agrees with me. They’d already obviously set out to please me by making a game about The Beatles, so Green Day: Rock Band is the creamy filling in the cake. I can’t say “icing on the cake” because I’m actually not a fan of icing, and that would imply that I dislike Green Day: Senior Year Dance.

Speaking of dislikes, freely available online media for this game is rare. Google Image Search did not help me at all in finding a decent screenshot, so I decided to make my own. Harmonix kept Green Day:  Rock Band a tight-arsed secret for some time, and something called “E Three” happened, so screenshots are scarce. Enjoy these, hot off the press, as they say. 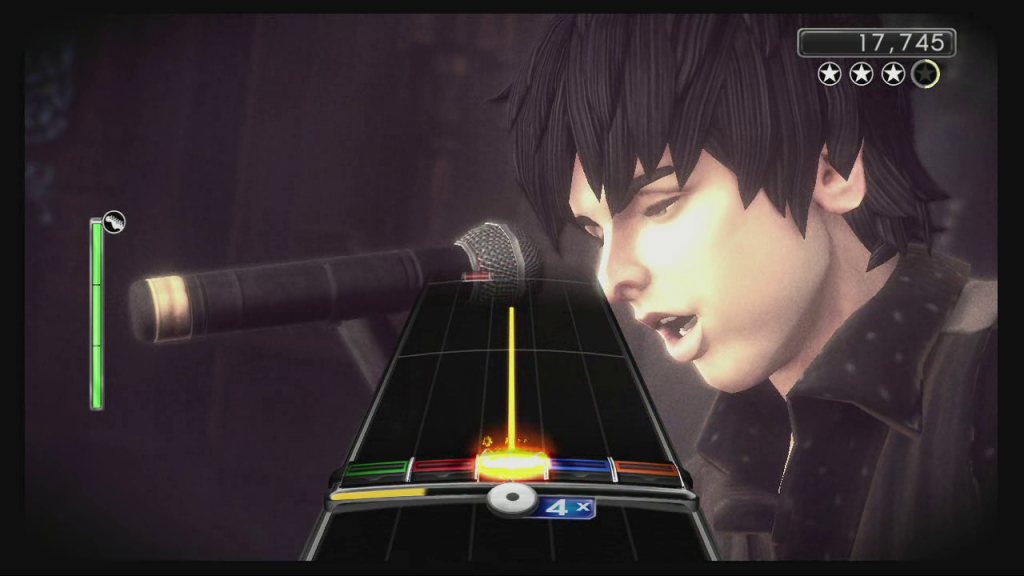 Green Day is revolutionary. Look, I don’t care that teenagers hanging outside the mall dress in black and quote Green Day lyrics—they’ve probably never heard of “Platypus,” “Last Ride In” or “Haushinka.” They’re not Green Day enthusiasts; they’re just the people all the merchandise is directed toward. Take a minute to kick back to old Green Day, and you’ll see how I can say they’ve been a pivotal part in my growing-up.

The instrumentation, format of their music, and lyrics have been so important throughout my childhood and the years stemming up to my adolescence and beyond. I got into Green Day quite late; by that time, they had already released 1,039/Smoothed Out Slappy Hours, Kerplunk, Dookie, Insomniac, Nimrod, Warning, and International Super Hits. When American Idiot came out, I thought it was radical compared to the Green Day I had listened to, especially Warning, and shunned it completely.

Truth is, Warning and Shenanigans are definitely the most radical.

Recently, I bit the bullet and discovered that lead casings hurt teeth. Because I’d grown up listening to stuff Green Day had already released, I hadn’t felt the full effect of every album. Each of them is different. Each of them is a “modern-day masterpiece” in every sense of the phrase. They’re all revolutionary albums for their time—and that goes for American Idiot and 21st Century Breakdown, as well.

So what if America’s youth listens to Green Day and doesn’t understand the importance of the band?They’re not meant to. They’re meant to buy everything with “Green Day” slapped on it. I’m not one of those people, but this game is damn near worth owning!

Like The Beatles: RB, Green Day: RB employs sleek menus that provide a cleaner and easier interface to follow. Also like its predecessor, Green Day: RB has unlockable videos and photos that you earn by doing well in the songs, and it has challenges where you play songs back-to-back.

The career mode feels good and makes sense, and it’s separated into three gigs, allowing you to play later gigs first. Which is handy, because, like The Beatles: RB, the songs in the earlier gigs are harder. I’m glad Harmonix read my review (lol), and made the appropriate changes. See? Non-violent protest is best.

But there’s a catch with Green Day: RB. For a game celebrating the history of the band, it goes nowhere near as far and deep as The Beatles: RB does. For starters, Green Day World Tour technically contains only three albums in their entirety—Dookie, American Idiot and 21st Century Breakdown—and then it’s only if you’ve bought “21 Guns,” “!Viva la Gloria!” and the others as DLC. 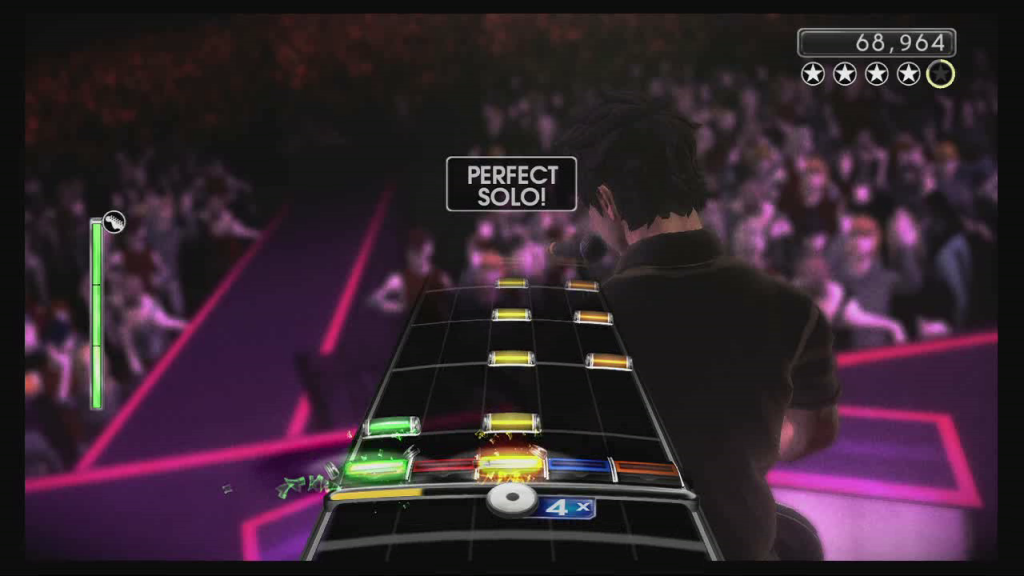 The spread for the other albums is disrespectful; it really is. Kerplunk and 1,039 are not represented at all (thanks to the tapes not having been transferred yet).

My favorite album, Nimrod, has “Good Riddance,” “Hitchin’ A Ride” and “Nice Guys Finish Last.” That’s all they have to say about Nimrod, huh? That’s Redundant… It’s like they took all of Green Day’s songs, threw them up in the air and Scattered them around before picking some at random.

All Insomniac has to offer Green Day Legends of Rock (according to whoever chose the songs) is “Geek Stink Breath” and “Brain Stew/Jaded.” They managed to screw up 86 percent of the game’s soundtrack by missing out on the best songs—turning Green Day: Rock Band into a Walking Contradiction.

This is still an absolutely great game, but without the “greats,” y’know? If you’re paying tribute to a band, you cover as much of their library as you can, not the very least that you can get away with. If this is not sorted out by DLC (like my few issues with The Beatles weren’t), then I’ll lose a lot of faith in Harmonix and MTV Games.

You know, Dance Central is just around the corner—you want to keep me hyped for it, so don’t make me lose faith in you, babe. 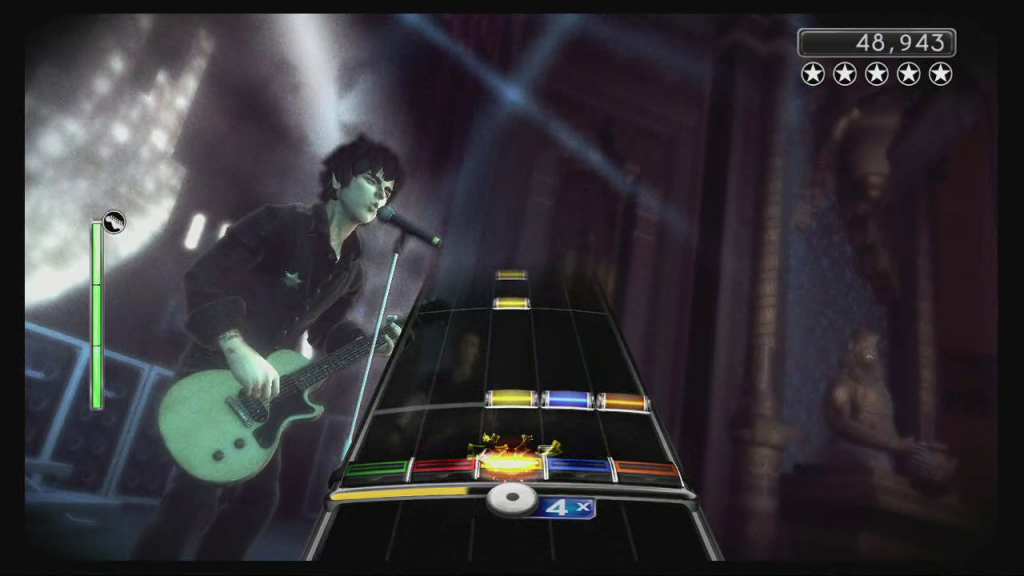 When Rock Band 2 loads the song I’ve picked in Quick Play with any one of the music video skins, I burst with excitement, because they’re so bogglingly fascinating to look at. Dream sequences reflect this, and them being absent from Green Day: RB is to be expected, so it’s not really something I can complain about.

But I will anyway! Green Day: RB needs these sequences. They’re cool, slick, and stunning, and they show that “thought and attention” has gone into the product. I just don’t feel that with Green Day Smash Hits.

Also—The Beatles: Rock Band finally gave us properly modeled and textured crowds, and Green Day: Rock Band takes us back to the ugly looking badly textured ones again. I am the only person in the world bothered by this, though.

Green Day Rawkin’ All Nite does take us to the three gigs they consider to be their favourites, one of which I actually went to! Seriously!

I’m not there in the low quality in-game crowd, but I might be a pixel somewhere in the crowd of the Bullet in the Bible DVD. Really, no lie.

I know that any band’s inclusion in a videogame is to advertise the band and their music, but I think it’s obvious with Green Day: Rock Band that this was the main motive. Whereas The Beatles: Rock Band sells us more than just a band’s library (such as their lifestyle, story and indeed the whole feel of the era), Green Day: RB doesn’t. It just feels like a Green Day-themed Rock Band game.

So, would I tell you to buy it? Only if you like Green Day. There doesn’t seem to be much point otherwise. 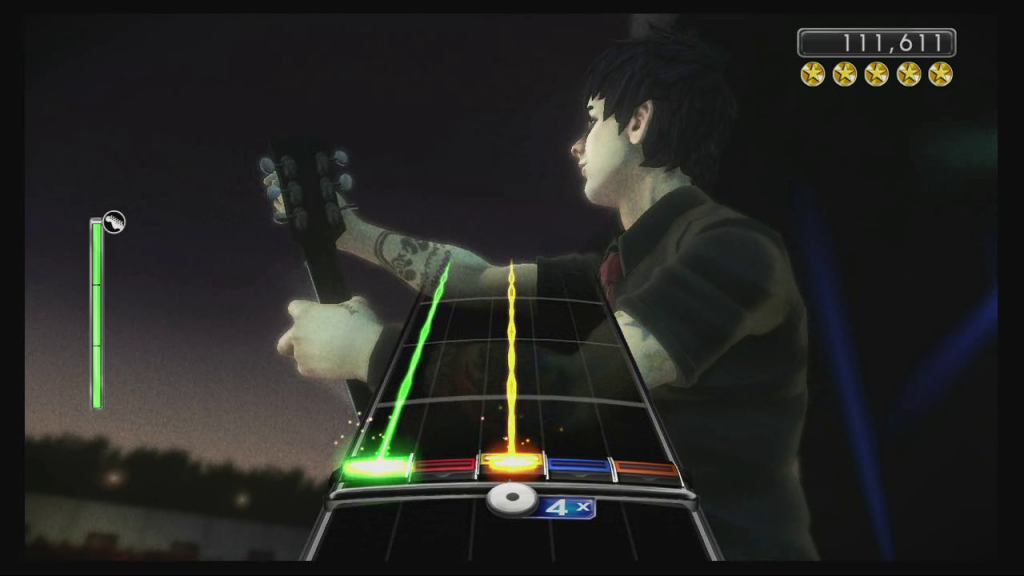 I feel this one is for the fans only—those who feel like they don’t have to justify blowing a wad of cash on a game just because it’s about their favorite band. It is a good game, full of fun, brilliant songs, but it’s deliberately missing some of the band’s greatest songs.

I played Guitar Hero: Green Day on Xbox Live for over an hour without any latency issues—it isn’t perfect, but it’s definitely as good as usual. The online play is ever present, and people riding along with the career owner can keep their progress toward song completion, stars and other data, which isn’t always the case with these games (I remember having to play through World Tour about five times to get everything I was owed, and let us not be started upon the second son of Guitar Hero).

Because The Beatles: Rock Band comes with all the good songs included, the DLC isn’t very successful. So maybe by ignoring some of the great unsung ones with Green Day: Rock Band, Harmonix might have ensured good quality DLC in the future. I pray to God that Harmonix delivers Insomniac and Nimrod by the end of the year. That would be nice.