Someone told me that Onechanbara: Bikini Zombie Slayers for the Nintendo Wii is an improvement over the Xbox 360 installment, Bikini Samurai Squad. And whoever it was who told me that…is correct. But riddle me this: If you’re discussing which turd is a better turd, then there isn’t going to be that much of a difference, is there?

Bikini Zombie Slayers is only a polished version of Bikini Samurai Squad, which earned a Below Average score when I reviewed it in February this year (a whole year after release). If you want to experience the full adventure, you have to play Samurai Squad then Zombie Slayers, meaning that,to get the full story, you have to own not just an Xbox 360 and a Wii, but also both games.

The most notable thing about the Wii version is that it looks better than the Xbox 360 version. This surprised me, as you’d have thought it to be the other way ’round. The textures look a little better, the colors appear more vibrant, and the character models (though barely altered from Samurai Squad) look fairly good for the Wii hardware.

This Onechanbara game also has multiple stories, as opposed to one main storyline. This creates more replayability in the long run, but that is spoiled enough by the game truly sucking hard. 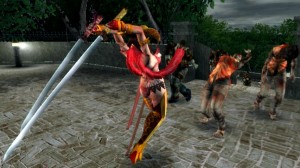 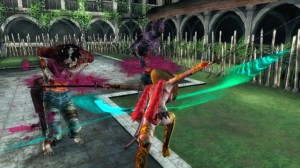 The controls are a bit complicated. Could we have had GameCube Controller or Classic Controller support? Of course not; it’s fucking Tamsoft. I’m surprised it is even remotely playable, actually.

The sexual aspect is still here but not played up half as much as I felt Samurai Squad did. Also, production costs of this version appear to be much better, with actual cutscenes rather than character portraits and blocks of text. True, there’s zilch FMV this time around, but I prefer cutscenes to FMVs, to be honest with you.

The credits theme is an absolute dirge because Argie Phine cannot sing. But it reminds me of the Burning Rangers theme, so I can forgive it. Nice guitar solo, by the way.

The game is overall just as unmemorable as its twisted sister. It’s not like we’re not gonna take it. Sure, it’s better than Samurai Squad, but it’s like saying “E.T. or Space Math. Pick your fave.”

This is a better (but still by no means “good”) installment in the Onechanbara series. Avoid this, and avoid the Xbox 360 version. Neither are worth your time.