Time for the last installment of Professor Layton and the Unwound Future! Right now, we’re at the dramatic conclusion of the game, so you might want to check out the previous installments of this series in order to catch up with what’s going on. [Suggestion to editor: please include links to the other installments on this series!] [Suggestion to author: leaving notes to the editor in your review looks unprofessional.]

Ten years ago, Creepy was working on a time machine with his assistants, Prime Minister Sleepy (although he wasn’t the Prime Minister, then) and Claire, Professor Layton’s girlfriend. Mr. Sleepy sabotaged the time machine so it would explode and kill Claire, due to pressure from several large corporations. Apparently, there is great demand for exploding time machines in Britain. Who knew?

So, that’s why Creepy Scientist kidnapped the Prime Minister: he wants revenge. He also feels partly responsible for Claire’s death, which is why he’s building a time machine to prevent the death from happening. Great! Now everything makes sense, everyone’s motives are perfectly clear, and there are no longer any mysteries to solve. Creepy Scientist decides to stop being evil, everyone goes back to the present time, and they all live happily ever after. The End.

From left to right: Professor Layton, Claire, Luke and Flora. Flora’s eyes kind of creep me out during these cutscenes.

No, wait. That’s what would happen if the game made sense. But this is a Professor Layton game! It’s the tradition of the series to come up with completely unrealistic explanations for everything! In the first game, everyone in town was a robot. In the second game, the vampire and the entire town was mass hallucination. And in the fourth game—spoiler alert—Professor Layton reveals that he is actually the Queen of England in disguise.

Following in this bold tradition of wild and crazy plotlines, Professor Layton explains that they are not really in the future. No, instead they are inside a humongous cavern, 100 miles under the Earth, where someone has built an exact duplicate of the town of London. It’s like they’re in the world’s largest movie set. Everyone agrees that this makes complete sense, and Professor Layton gets complimented on his keen deductive skills.

Ah, but who went through all the trouble of tricking everyone into thinking they are in the future? Was it Creepy Scientist? No, it was…CLIVE!

At this point, Future Luke jumps up and goes, “Raw ha ha! That’s right! I am evil! My name is Clive! Fear me! Raw ha ha!” He then kidnaps Flora and runs off into his Giant Robot of Doom, which is about three times as tall as Big Ben and is shaped sort of like a cockroach with a spiky back. It also shoots out cannonballs.

…No, seriously. That’s exactly what happens. 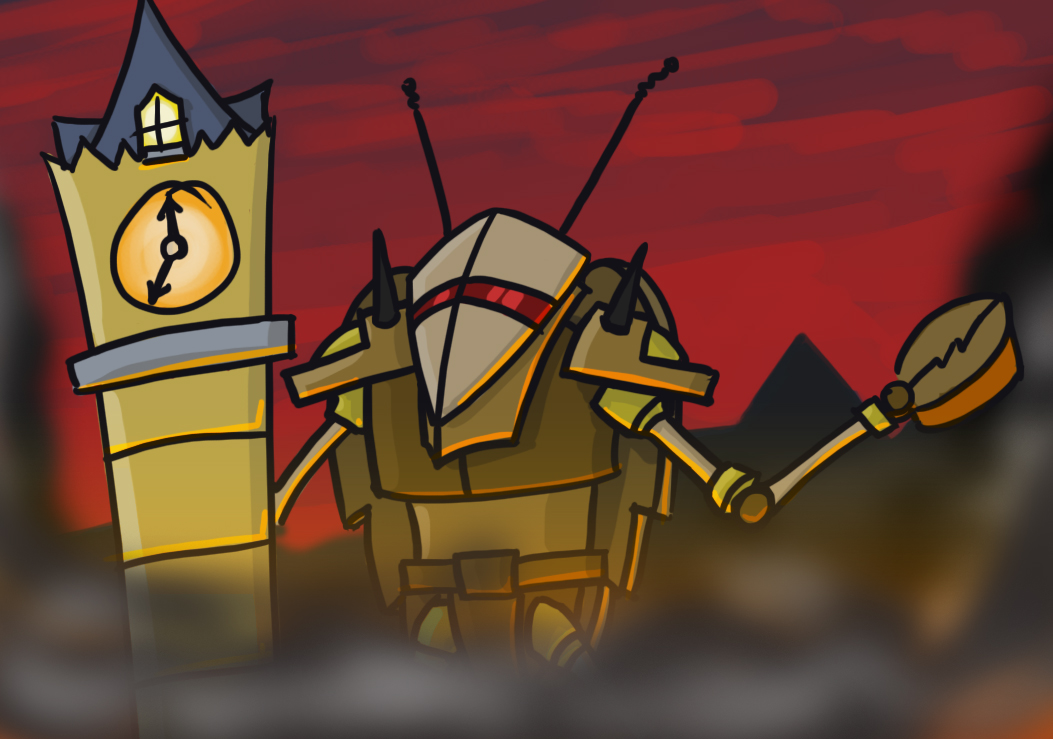 Clive’s monster robot jumps up through the surface of the Earth and starts destroying the real London. Fortunately, Don Paolo has modified Professor Layton’s car so it can fly, and our heroes drive/fly the car up to the top of Clive’s Giant Robot of Doom. Inside, they find the Prime Minister, who is still sleeping. Prime Minister! You’re going to miss the whole game, at this rate!

Professor Layton manages to stop the Giant Robot by turning off the main generator. This causes a ten-minute self-destruct sequence, which is very dramatic and filled with animated cutscenes. It’s so exciting that the Prime Minister wakes up! But don’t worry, everyone; the game has a happy ending. Everyone escapes from the giant robot, and it explodes harmlessly in the fake London, which has been evacuated.

Layton takes off his hat at this point, and he has a very messy hairdo. Put the hat back on, Layton!

Anyway, that’s basically the end of the game. London is saved, Layton is officially single again, and Flora goes back to doing whatever it is that she does. There are about ten minutes of ending credits, followed by blatant sequel fodder. Luke (who has now moved away with his parents) just discovered a mystery! Boy, wouldn’t it be great if the Professor came to solve the mystery? Stay tuned for the next installment of the Professor Layton series to see what happens next!

Sure, Pokémon may not generally be considered to be offensive (except by the same caliber of person who burns Harry Potter books for being evil childrens' witchcraft manuals), but Cracked.com recentl