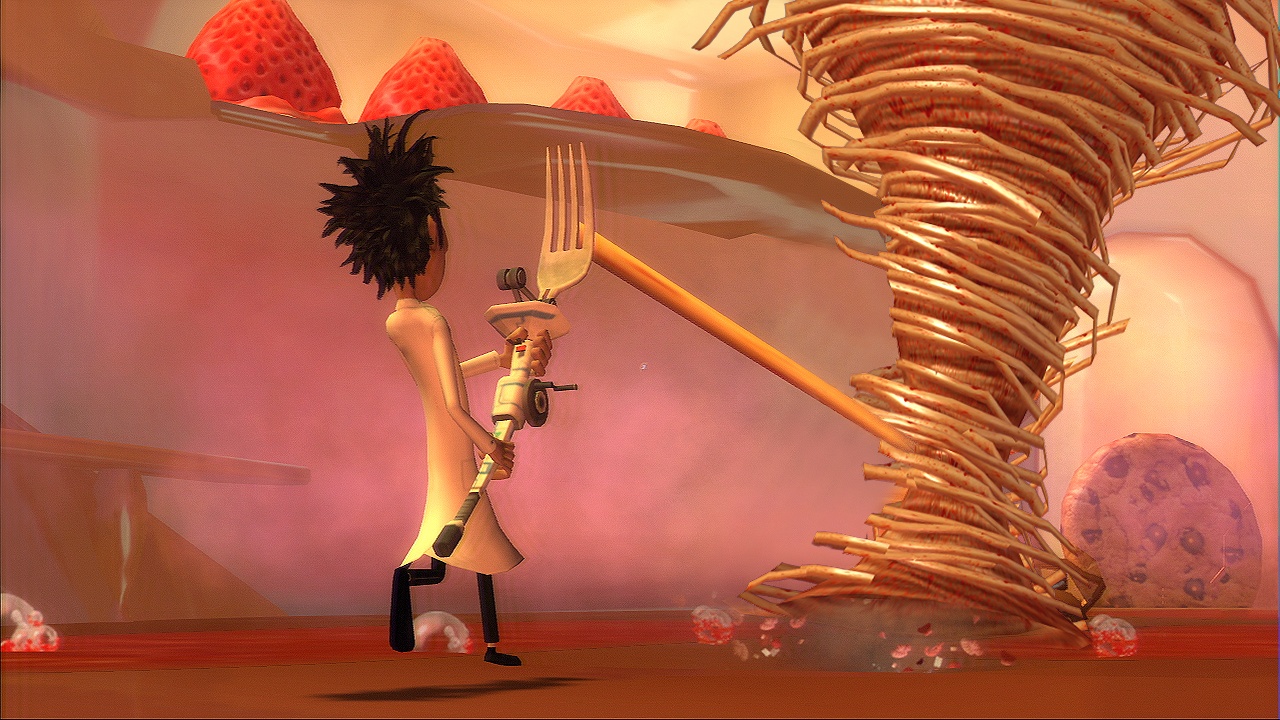 If there’s a platformer to get your laughing gear around, it’s Cloudy with a Chance of Meatballs. Proof that the simplest of dishes can result in the most refined dining experiences, Chance of Meatballs delivers catering bliss by avoiding the extra servings that come as standard in games of this genre.

Rather than being sandwiched between genres like most other movie-based platformers, Chance of Meatballs hasn’t been mucked about with. Good honest gaming is what’s on offer here, especially for those with a sweet tooth. Chance of Meatballs proves there’s snow better platformer, by steering clear of the wide-open stages with precarious jumping that make other platformers feel caked on. The dangerous, hazardous levels have been sieved out, leaving behind the good stuff, like simple puzzles and hidden secrets. The game congratulates players for doing what is required, and rewards them for doing things well. It provides enough gameplay to the point where you feel like you’re done when you’ve finished your plate. You’re full but not bursting; you’re content and don’t need seconds.

I’ve missed playing games like this—games that focus on the healthy stuff and leave out the junk.

The rules for the future of platform games are laid out here in Cloudy with a Chance of Meatballs, and it remains one of the best movie tie-in platformers to date. It is jell-oads of fun.

Everything LEGO Star Wars invented is here—the isometric camera angles, the drop-in/drop-out co-op gameplay, and the simple “object needs particular ability” puzzles. Simplicity is the key to revitalizing a genre that, right now, tends to focus on complication and confusion. Building up abilities over time is what separates your LEGO Indiana Jones from your LEGO Indiana Jones 2.

But even the best LEGO games have vast levels that are far bigger than they need to be. Panning camera angles, in-level cutscenes and other twaddle just result in confuzzling the player. Replaying levels over and over again to get the one miniskirt (or whatever) that I missed wasn’t fun. That’s why Chance of Meatballs refuses to include in-level secret puzzles. The only things you can destroy are either the food-pods that you need to eradicate to fully complete the game, or the obstacles that block your path. There aren’t any extra things to smash, which is why the simplicity wins over for me again. Rather than spoil the broth with a seasoning of unsavory minigames, Chance of Meatballs delivers good old-fashioned home-cooked platforming, just like mum used to make. 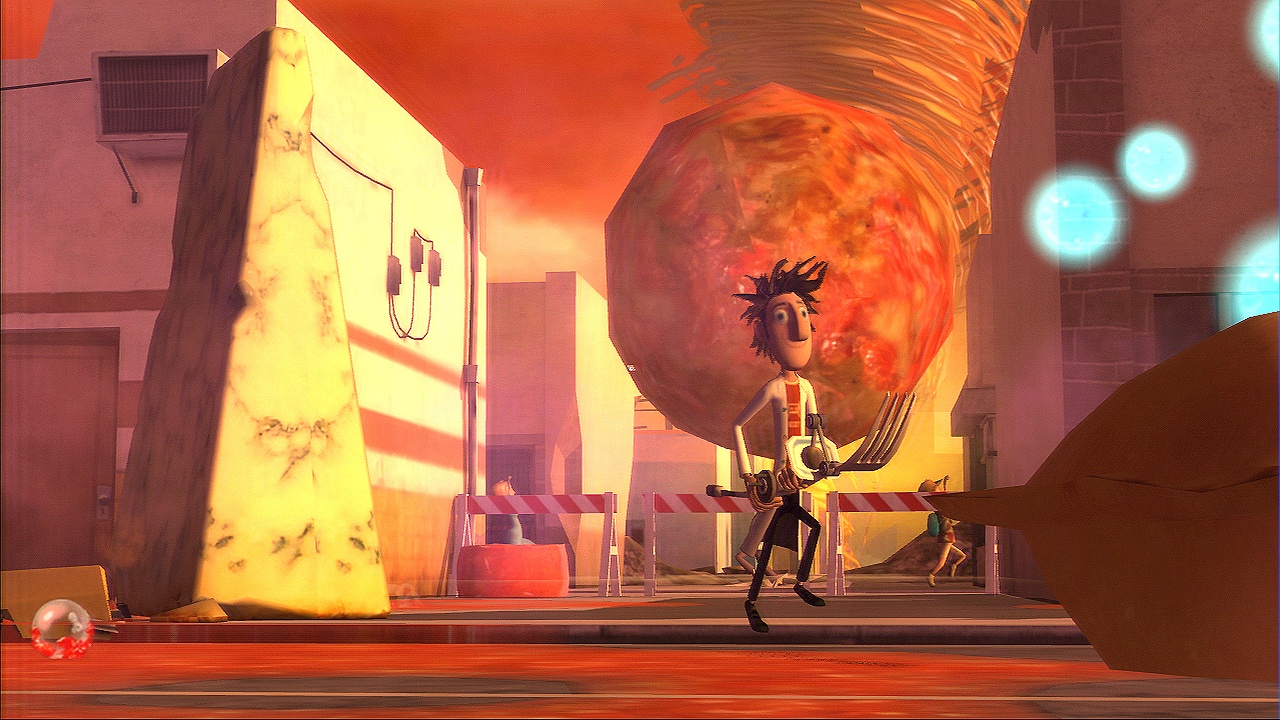 The progression of the game is just right, as each level feels like it builds up slowly, until a finale stage for each act, which is a smidgen longer than the others. The ordering of things is just right, like a three-course meal. Each level has food-pods to destroy, hidden around the place. Destroying all the food-pods nets you a blueprint, and collecting all the blueprints allows you to complete the game with the best ending.

As you progress through the game, you go from stages that use only one gadget to stages that use upwards of three. Each gadget is similar to receiving a new character in a LEGO game, in that they each have a different ability to help you progress or sniff out the hidden collectibles. When searching for what you’ve missed is this delectable, you know you’re not playing Night at the Museum 2. You also know you’re not replaying the whole game because you forgot to collect one (insert random and unrelated stupid collectible here).

The cutscenes throughout the game are in 16-bit sprite form, being played on an old monitor, with chiptunes accompanying them. They’re just one of many elements that show the true work that went into this package. As you unlock blueprints, you also unlock concept art for each of the levels in the game. It is truly bewildering the amount of design and conceptualizing that went into this game when you take a gander at the concept art.

Chance of Meatballs gets better the more you play of it. The controls feel better, and you get to learn all of the little tricks within the engine. Going through earlier levels to clean up, and figuring out you missed food-pods due to school-boy error, is surprisingly satisfying. And so are the gamerpoints. All 25 Achievements in Chance of Meatballs are particularly easy. But trust me; the game is really tasty, too! 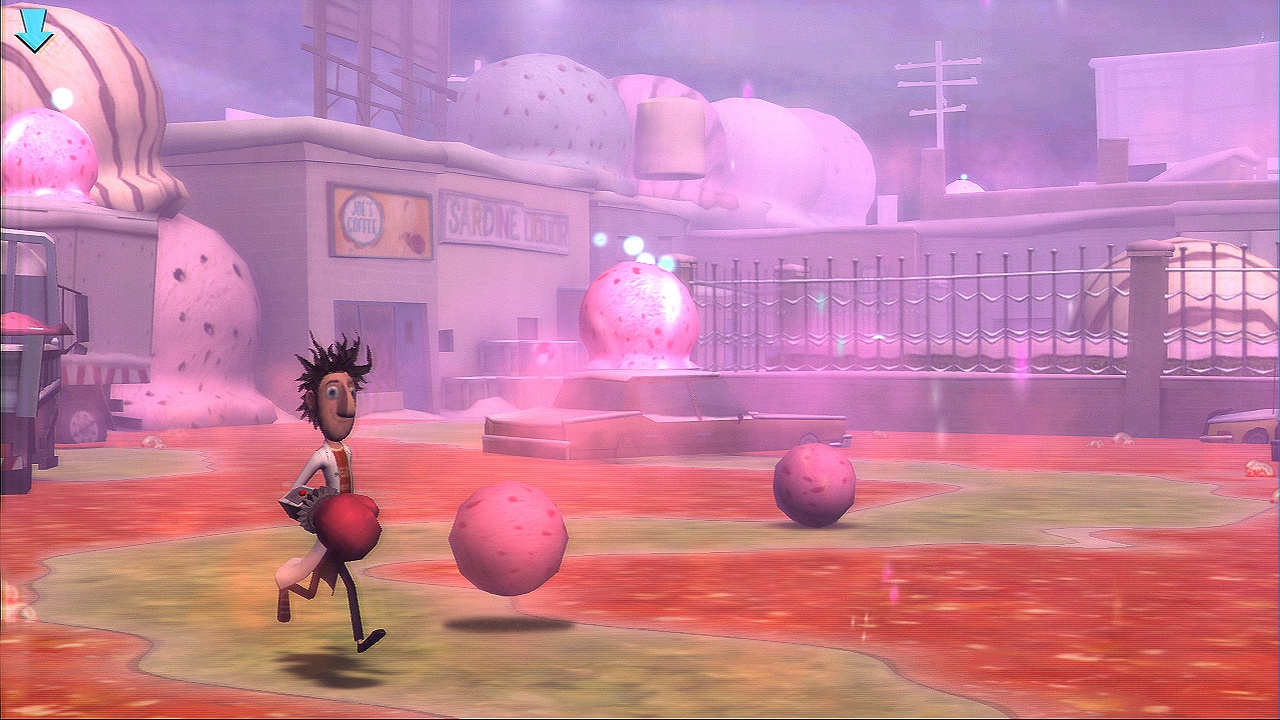 There are only two problems that Chance of Meatballs is faced with. The first one is that, once it’s over, and you’ve completed the game in its entirety, there’s no need to go back. It’s done and dusted—an experience that I will never be able to have again. You can have your cake and eat it, but there’s no cake left after that.

The second problem is Flint Lockwood’s diarrhea of the mouth. He feels the need to comment on everything he is doing, constantly. Switching gadgets? He’ll name it. Whenever you walk on guacamole, he announces “Operation Guacamole!” Die regularly at certain checkpoints, and you’ll get to appreciate unfunny one liners multiple times, such as “When good food goes BAD. Starring Flint Lockwood.”

He speaks all the time. No, really, ALL the time. He is very frustrating whenever his mouth is open, which is always. He’s like Guybrush Threepwood: a very, very clever guy who feels the need to talk crap incessantly throughout the whole game. He speaks his own language, which is a mix of English and Retard. I eventually ended up liking his funny invented words, even though it took me a while to warm to them. Perhaps it’s just Stockholm Syndrome.

Cloudy with a Chance of Meatballs is definitely my favorite Xbox 360 platformer, to this day, and most likely from now on, too. It’s simple, fun, and it’s very low on the Achievement difficulty scale. But that isn’t why it love it; I love Cloudy because it separates itself from platformers where the collectibles are sprinkled all over each level, like hundreds and thousands. By avoiding the confusion of your gaming taste-buds with too many flavors, Cloudy with a Chance of Meatballs steaks its claim as the best in its genre.

Baguette this game now that it’s pretty cheap. This game is definitely not past it’s sell-by-date, that’s for sure. It is a meaty game well worth sinking your teeth into. It’s a lean, mean movie tie-in machine. Ice-cream loudly for a sequel, because, like a meatball marinara footlong, Cloudy with a Chance of Meatballs is fucking great.

Samus Aran, in all her ball-morphing glory, is back in another FPS with Nintendo's latest outing in the Metroid series, Metroid Prime Hunters. Thank God it ain't pinball. When the topic of first-perso