You see a game perched on the store shelf, and you’re thinking, “Hey, I’ve never heard of this game”. This happens to me all the time, the most recent examples being Dead To Rights: Retribution, Mindjack and Morphx. But on this particular occasion, I had a realization about the game I saw. I stopped and thought to myself, “No wait, wasn’t this announced back in 2008? And hasn’t this been canned, like, twice?”

The right thing to do at that point was to back off, but curiosity got the better of me.

This is a game that has not been advertised anywhere, and has already been confirmed cancelled. If you think about it, all the sirens should already be going off in your head, wailing “put this down immediately!”. Do you expect it to be good? Of course not. If you saw this game on the shelf, you would err on the side of caution, waiting at least to see if there are any reviews out there that tell you exactly what it is you want to know. After all said and done, if the game has just appeared, then it probably isn’t any good. At least, that is the logic I find it best to adhere to, with MindJack being the perfect example to back up this claim.

If I hadn’t walked away by then, I should have.

I’m a man who runs on logical decisions, with thoughts firmly grounded around saving money and having a good time by playing great games. I should have avoided this game, but I didn’t, and now I’m really paying for it. Critical Mass makes Time To Kill look respectable. If I had waited twelve years for this game, I would have turned to self-harm in the hopes of finding something to equal the pain. Critical Mass? More like Critical Ass, or rather, Duke Nukem: Shit in a Glass. This game is an ugly, disheveled mess. How can a game with promotional art of this standard be so dreadful?

Needless to say, I am very disappointed with every aspect of this game, but I have no one to blame but myself. Even when loading it up, the company logos drag on and on, which is an excellent start. The title screen is completely devoid of a logo and it says “Touch To Continue.” This would have been acceptable when the Nintendo DS came out, but not this late in the handheld’s life cycle, and the screen doesn’t serve any purpose.

After starting a new game or loading a saved profile, the highlighted menu option is for New Game, even though you have progressed further than a level in. This is 2011, you’d have thought that making the menu auto-highlight “Resume Game” would be the norm these days (Final Fantasy VII did this over ten years ago!).

The opening cutscene shows promise. It explains the premise of the game, but there are only so many times I can take “time travel” lying down. Seriously, time travel. How friggin’ original, guys. Duke Nukem already defeated time-traveling aliens in Time To Kill, his first PlayStation outing besides Duke Nukem 3D. Are you really that short on ideas?

When the game starts out, it insists upon showing you four screens’ worth of controls, which you instantly forget anyway. Put the damn things in the manual; don’t force us to see them when starting the game. On a loading screen would be fine, but this is Nintendo DS, and if you’re trying hard enough, you can making loading completely unnoticeable. These controls you’re forcing me to look at are not masking a loading screen at all. You’re just showing them to me for no reason.

Once you’ve finished skipping the controls, you can finally get into the game. You will suddenly wish the screens detailing the controls had dragged on for an eternity. It blows. 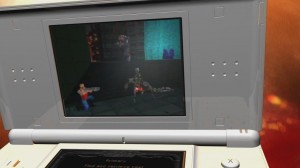 There is a lack of decent screenshots online; most are from very early builds.

This festering “Skag pile” is a clear clone of Duke Nukem: Manhattan Project, yet without the polish and affection for The Duke that is present in that game. Several of the sound effects seem to have been lifted straight from Manhattan Project, as are the backgrounds, level designs, enemies, weapons and game elements such as trapped babes. So much for a time traveling storyline, as these first levels just mirror Manhattan Project, and do nothing but cause upset.

Sadly, for a game imitating Manhattan Project, it does a better job of ruining the excellent controls of the 2002 PC hit than it does improving anything. This DS catastrophe plays like a game where Duke Nukem has been replaced with the Tin Man from The Wizard of Oz, in levels made up entirely of quicksand. The flow of this game is anything but comfortable and everything but acceptable. The Nintendo DS was launched in 2004, meaning that it has been a part of our lives for almost seven years, and this game feels like it should have been a launch title. A bad launch title.

A new cover system has been added, which can only be done at certain sections. If you’ve played Time Crisis: Razing Storm and thought the “G Action” was pointless and ruined the whole game for you, then you haven’t seen a single damn thing yet. Believe me when I say, the controls suck and the game sucks. End of paragraph. 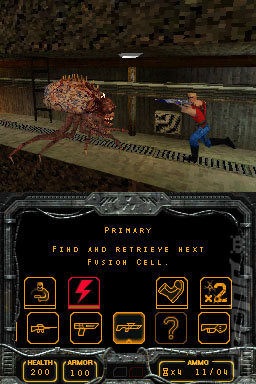 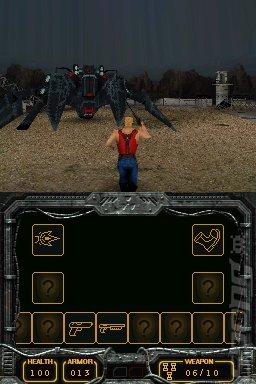 The graphics are a large concern in this game. In short, easy to understand terms, they make Ridge Racer look like L.A. Noire. In long-winded terminology that requires some heavy contemplation, the graphics are too blurry and too dark, as though the game developers tested their game with the gamma and brightness up too high compared to real Nintendo DS screen. The screenshots make the game look alright, but on a DS screen, you cannot see anything at all.

I know that a Duke Nukem isn’t meant to be a colorful game (except for the language), but the inability to see far in this game can be likened to the terrible draw distance in Tenchu: Time of the Assassins. It is impossible to make out where the platforms are when scaling the skyscrapers in the first chapter of the story, and the graphics are just plain dissatisfying and too matte black. I understand that these levels take place at night, but not being able to see where you are climbing totally ruins whatever fun was left, and this isn’t acceptable. Definitely not now, when I’d have thought we’d have ironed out how not to do lighting in Nintendo DS games.

Flying stages piqued up my hopes, only for them to be shot down again. There was, for a short moment, the possibility of some decent shoot’em’up action. But these dreams were spoiled by the realization that there is no challenge to the stages, every enemy drops a pick-up, and the boss is easily defeated just by holding down primary firing button and occasionally pressing secondary firing button.

The behind-Duke’s-back boss battles are also a great idea, but executed poorly. Story of this game, from start to finish. You find yourself wading through this incessant steam-train of fail-fuck, just to get the snippets of storyline, the only acceptable—nay, dare I say it—great parts of the game.

It is as though Critical Mass exists only to become the subject of hilarious jokes. Once you’ve seen Duke Nukem review his own game and hate it, you’ve seen all you need to know.

Don’t blow your cash on Mass, just blow it outta your ass.