After playing through and reviewing a couple of the earlier installments of the Back to the Future: The Game episodic adventure series, I came to the unbelievable conclusion that they were all pretty much the same thing. Shocking, I know; who would’ve figured that five episodes of the same game, featuring the same characters and containing the same overarching story, made by the same people with the same style of gameplay, would be so closely related that, if you brought them to Kansas, they would try to marry each other? As the fifth and final episode, OUTATIME, has finally been released, I thought this would be a good time to take a look back through the entire series. This is for two reasons. One, on its own, OUTATIME is pretty bad, and reviewing it on its own would require me to take my precious childhood memories out back and beat them with a rusty tire iron. And secondly, if I have to review one more episode of this game on its own I’m pretty much screwed, as I’ve run out of ways to phrase all the same jokes.

Now, call me a Back to the Future fanatic and make fun of me all you want for my desire to name my first kid Marty and my second kid Flux Capacitor, I actually liked the story in the first four episodes of this series. They were funny, and they managed to actually build off of the original plots, instead of just blowing the dust off of them, rolling them out, and going “eh, they won’t notice.” The fifth episode decides to take a different approach to things, opting to be boring just so it can stand out from the others. Following the events of the fourth episode, you now need to stop Doc from making a horrible decision, which is about as specific as I can get without completely spoiling everything up to this point. The premise is fine, although somewhat diluted by the fact that Doc Brown has made so many terrible decisions with the timeline by this point it would have been more of a plot twist if he didn’t screw everything up and spent the night staying at home and watching the news. The finale takes you to a variety of different time points for twenty to thirty minutes each, and while I think this is supposed to create a sense of urgency, it’s kind of hard to make anything seem urgent when you have a time machine, because you can just go back to when you need to as often as possible. The effect it actually has it that it makes the story feel all over the place, and the last episode just doesn’t feel as cohesive as past episodes. Even a surprise guest appearance by Teddy Roosevelt can’t save it.

I don’t know how to describe it, but I’ve definitely seen something of a repeating pattern here, so for now I’ll just refer to it as Telltale Games syndrome. Have you ever been to a fireworks show that doesn’t understand how to pace things, and about halfway through the show they use all their most impressive fireworks? Then, when the finale comes around, it looks the same as the rest of the show, and after the last one goes off everyone just sits there for a couple of minutes, looking stupidly at the sky before being ushered away by the groundskeepers. That’s what Telltale Games syndrome is; all games start off well enough, but they never seem to know how to wrap things up and they just sort of cough and hope we get the hint to leave.

This time around, the letdown is certainly not as bad as what had happened at the end of Tales of Monkey Island, but in order for that abomination to be duplicated they would have had to include footage of them torturing Michael J. Fox. It is by far the most dull of the entire set, and while most games like to go out with a bang, Back to the Future opted instead to go out with a polite clap and a sensible dinner. The story in the last episode is passable, but I was getting genuinely bored about halfway through. There are still some funny lines here and there, but I got the distinct impression that the game was just sort of killing time because it felt like it needed to meet some minimum length. It seemed to run out of ideas about halfway through, but rather than just ending it, the game keeps checking its watch, cursing, and then sending me back to some other time period, hoping I’d waste enough time there to wrap things up. Sure, all the big mysteries and stuff get resolved, but the game is so bad at foreshadowing that I already had everything figured out like three episodes ago. I felt mildly insulted that they thought I was dumb enough to not have pieced together everything halfway through the first episode, and the big surprises had all the shocking twists of a game of peak-a-boo. 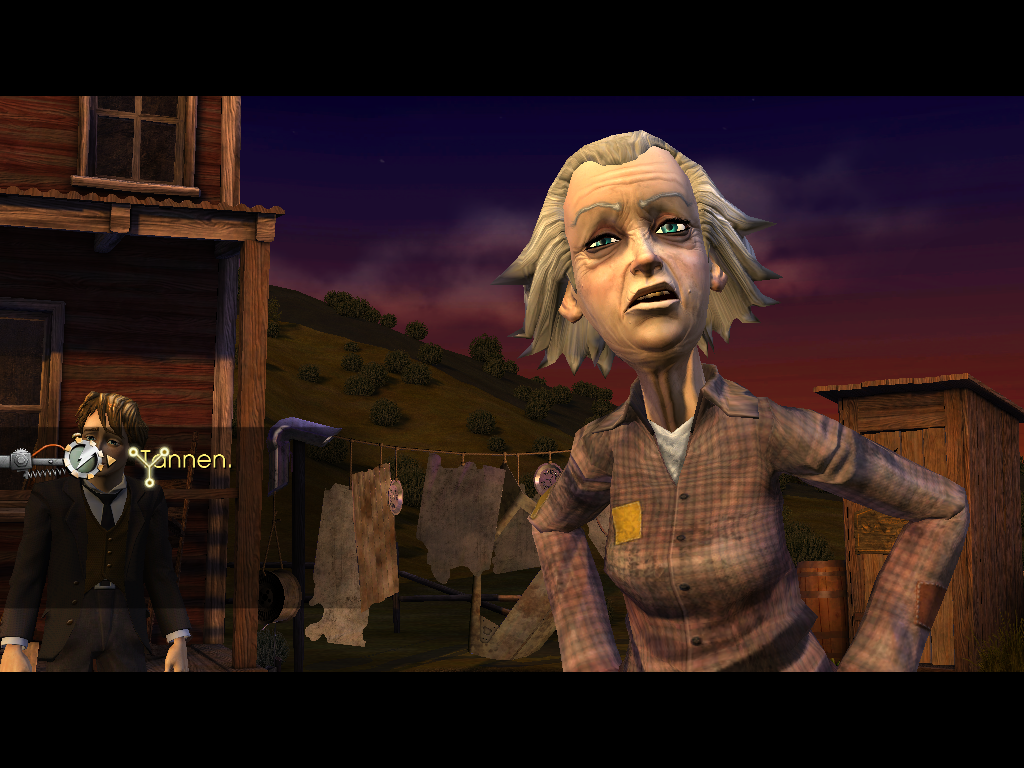 I suspect that part of the problem is a result of the fact that the game is episodic, and each episode needed to feel like its own complete story. While the locations are different (usually), there really is only one story through each of the five episodes: by trying to fix the timeline, you’ve only managed to mess it up worse. Just like in the movies, they never actually restore the real timeline, and Marty only putzes around with it until he finds one he likes. The effect of breaking the game down into smaller segments like this is that by the fifth episode, everything feels largely redundant. I’m running out of ways to say that Doc Brown really shouldn’t be allowed near a time machine because he has no idea what he’s doing, but the fact that the game doesn’t end with Marty swiping the keys from Doc and destroying his vehicle with the largest hammer he can find just shows that Marty is terrible at pattern recognition. 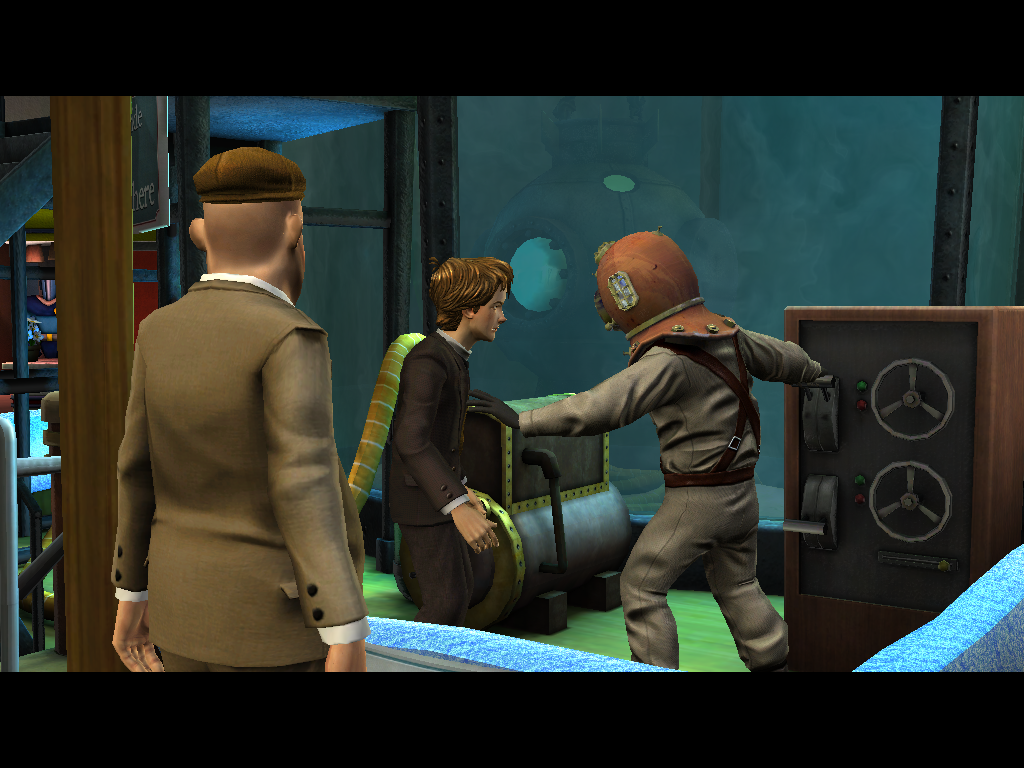 Further evidenced by the fact that he kept getting too close to this one’s Little Sister.

The puzzles in OUTATIME are also the worst in the series, and the most difficult aspect of the game is finding a surface uncomfortable enough to play it on so you don’t fall asleep. While a lot of the early episodes weren’t exactly what I would label as difficult, most of the puzzles were at least fairly fun or creative. There were always at least a couple that were really well thought out, and the episodes featured larger areas to explore. In the last episode, it feels more like the programmers went digging around in the bargain bin of rejected ideas, and most of the puzzles are no more complex than talking to one person or looking at the correct object. These end up being less tests of your logic and reasoning and more tests of whether or not your computer and mouse are properly working. There is one puzzle in OUTATIME where Marty offhandedly remarks “Gosh, I can’t believe that worked,” which is pretty much the programmers telling us “Yes, we too realize this was stupid and are hoping to disguise it with a witty comment.” The areas are also all very small, and the puzzles tend to sort of solve themselves. Good adventure games give you a sea of puzzles to explore, but OUTATIME seems afraid we’d get lost in an aquarium. 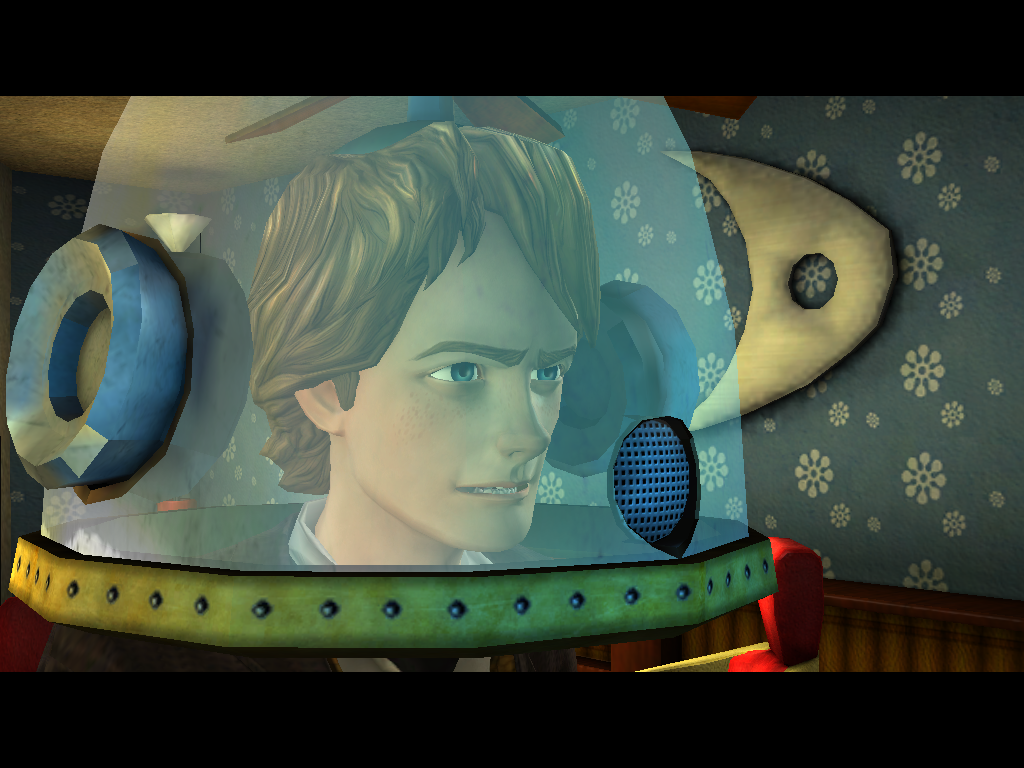 The preliminary results for my Marty aquarium.

The graphics and sound were both well done throughout the entire series. There are a couple of characters in the last game that sounded like they were doing a terrible Michael J. Fox impersonation, and after going to Google them so I could call them out, I found that they were actually Michael J. Fox. So, it turns out the voice actor they got for Marty actually does a better Michael J. Fox impersonation than Michael J. Fox, so I am petitioning the both of them to switch names just to make things easier for everyone. Beyond that, everything looks and sounds good, and the voice acting was actually very strong as a whole. Throughout the series, I did run into some problems with the game’s performance on my computer, where cutscenes and whatnot would take way too long to load and dialogue didn’t actually match up with the lips every once in a while. It wasn’t a huge deal, but it was kind of unnerving to hear tires squealing off but still have the camera focused on Doc talking.

The game ends with an indication that there will possibly be a second season of the Back to the Future games, and I suppose I’d purchase another one if it came out. The game as a whole was fairly entertaining, even if it did stumble at the final hurdle rather spectacularly, doing a sommersault that ended in a face plant. There’s a good assortment of puzzles throughout the entire series, although things kind of peak in the second and third episode, and by the final one the game has run out of tricks and is left to pull quarters from behind your ears while you pretend the solution isn’t right in front of your eyes out of pity. And while I’m sure my pleas will go on ignored, if there is a second season, I would prefer it if the game was released all at once. Episodic content pretty much guarantees that the last couple of episodes are the lowest in quality, as the further away they are from the original release, the less planning has likely gone into them and the more the programmers are required to get out almost everything in the month or so from the release of the previous episode. Just release the whole thing at once, Telltale! We’ll wait, I promise. And this way you can plan out everything at once, make the pacing seem like it isn’t all over the place, and ensure the ending doesn’t have the impact of a loud burp in the middle of an art museum. I’d be glad to go back to the Back to the Future future or past, but I’d prefer it if the entire road was paved before I started to drive so that I don’t have to worry as I approach the last couple of blocks if I’m going to run out of pavement and smash into a tree.

Want to hear about how Back to the Future: Episode 5 is actually the best one in the series? Check out Michael Gray’s take on the game here!

I reviewed Hyperballoid HD some moons ago (whilst it was only available in Europe), and since then, it has been released on the PlayStation Network in America. Alawar Entertainment has recently releas