With music and graphics reminiscent of a time when you’d pay upwards of $40 for a game with this kind of music and graphics, Tobe’s Delightfully Inexpensive $4.99 Adventure evokes memories of the Sega Genesis, the Super Nintendo, and half the games I’ve reviewed for my “Flash Flood” column. That retro feel applies not only to the aesthetics but also to the simple-to-learn, yet-challenging-to-master gameplay of Tobe’s Glorified Flash Game. 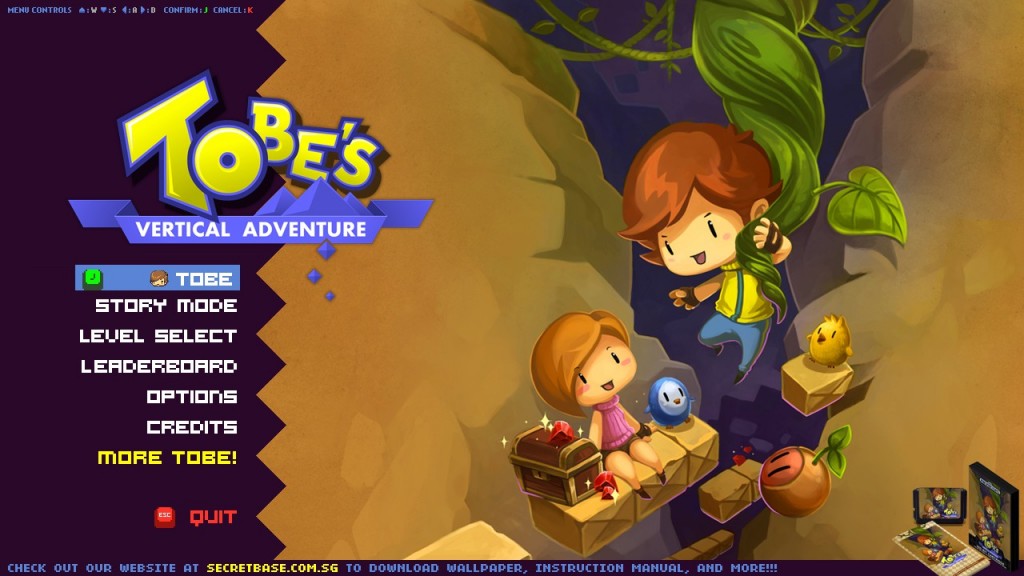 It’s the same “dodge the enemies, grab the treasure, fall screaming as you miss the last jump” mentality of any other 2D platformer you’ve ever played, but the game’s originality comes from combining elements of Mario, Metroid, Sonic, and their ilk into something…um, original. There’s wall jumping and enemy stomping and goodies hidden behind the scenery. There’s a mystic cave and a spooky pyramid and the only ice world in history that isn’t slippery. There’s a thin story told through cutscenes that look like slideshows of motivational posters, but as with any other 2D platformer, you probably don’t care. 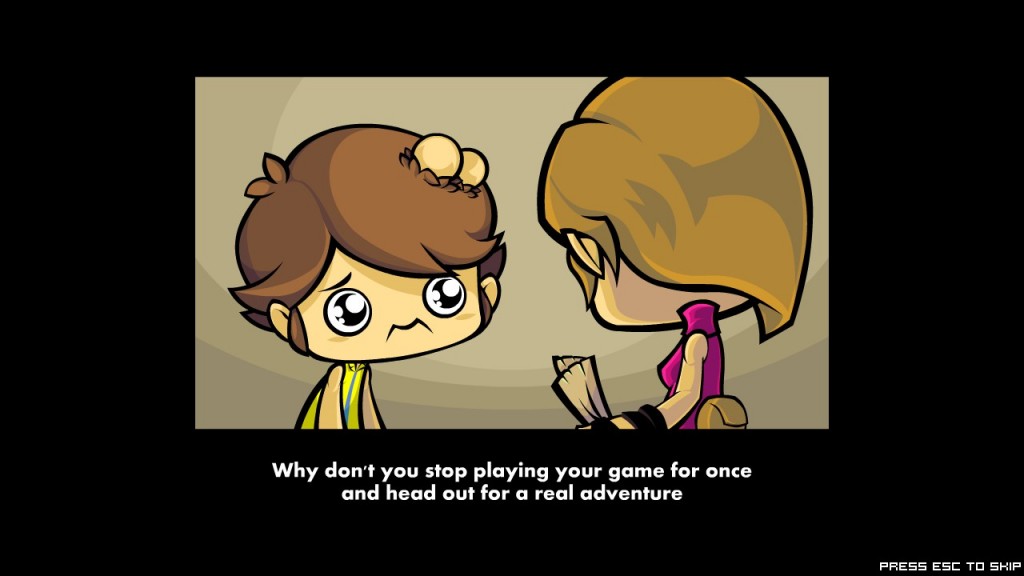 Tobe’s Threadbare Story Adventure lets you play as one of two well-rounded characters: Nana, who can essentially bend the level geography to her will thanks to her double jump ability, and Tobe, who compensates for his lame-o single jump by moving quickly enough to run up walls like he’s Kyle Katarn. Somebody go boot up Mega Man 10 and show that horribly unbalanced game that this is how you do multiple playable characters. Nana’s double jump frees you somewhat from following a set path through the stages, giving the game more of an open-ended sandboxy feel, while Tobe’s pathetic single jump makes it necessary to pay more attention to the layout of each stage, giving the game more of a puzzle-platformer feel. 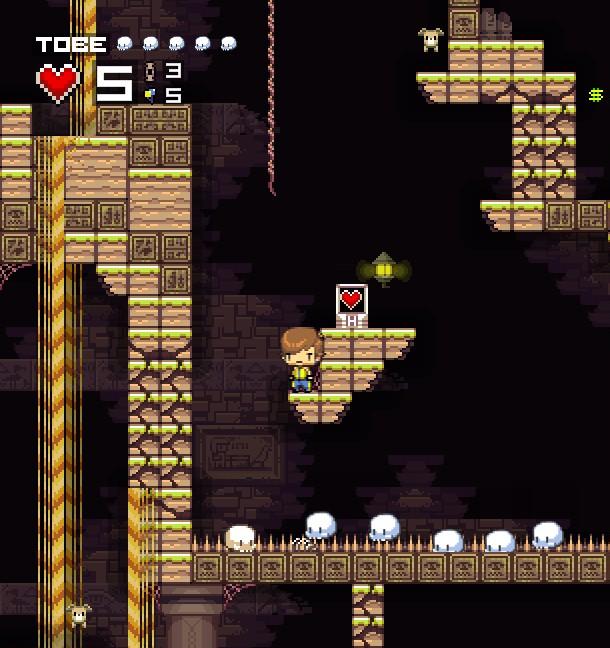 Lining the floor with the skulls of your enemies is not a socially acceptable form of interior decorating.

Fortunately for Tobe, you can stockpile two helpful utilities in each stage: chains and balloons. Before you start envisioning Balloon Fight Castlevania, I’d like to point out that—actually, go ahead and envision Balloon Fight Castlevania. Anywhip, these utilities will allow you to place your own climbing ropes around the level and gradually float to the ground, respectively. You can increase your carrying capacity for these utilities, as well as your maximum health and extra life total, by picking up the treasures and cute, fluffy animals scattered throughout the stages. Your guess is as good as mine as to how stuffing your pants with penguins gives you more carrying capacity. 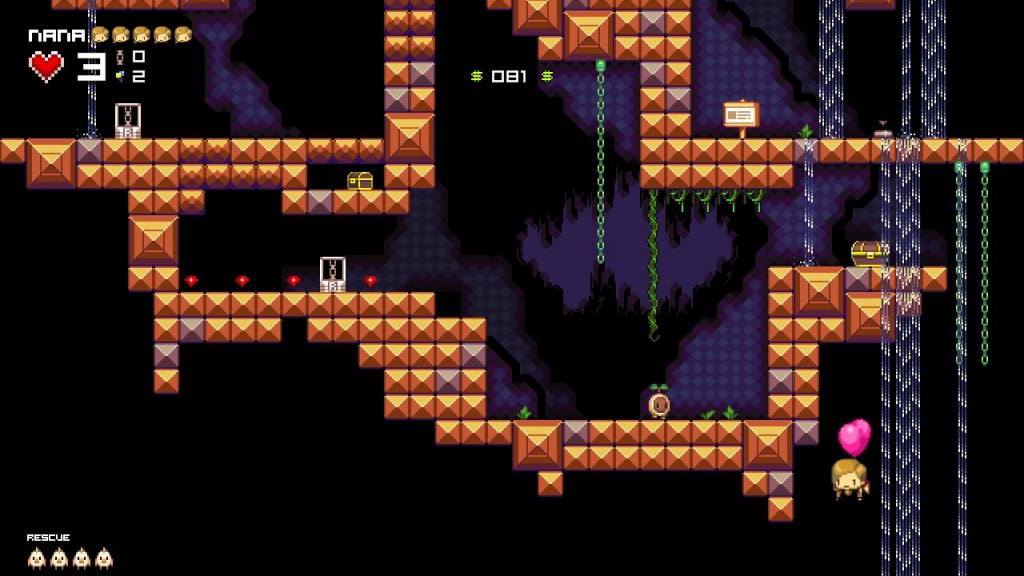 Of course, there will be times when neither chains nor balloons will help.

Obsessive completionists trying to make their Backloggery look good will reap additional benefits from collecting all the goodies in every stage: there are swag-related achievements clearly inspired by older games such as Final Fantasy VI and DuckTales, plus you get secret passwords that can be used to unlock the game’s downloadable soundtrack and art gallery (which includes a number of nifty concept sketches that, disappointingly, never surfaced as actual concepts in the final game). Happily, Tobe’s Thoughtfully Crafted Adventure allows you to revisit individual stages to pick up whatever treasure you hastily abandoned on the way to the exit, and lets you see from the main menu exactly how many cute, fluffy animals you’ve condemned to horrible oblivion. 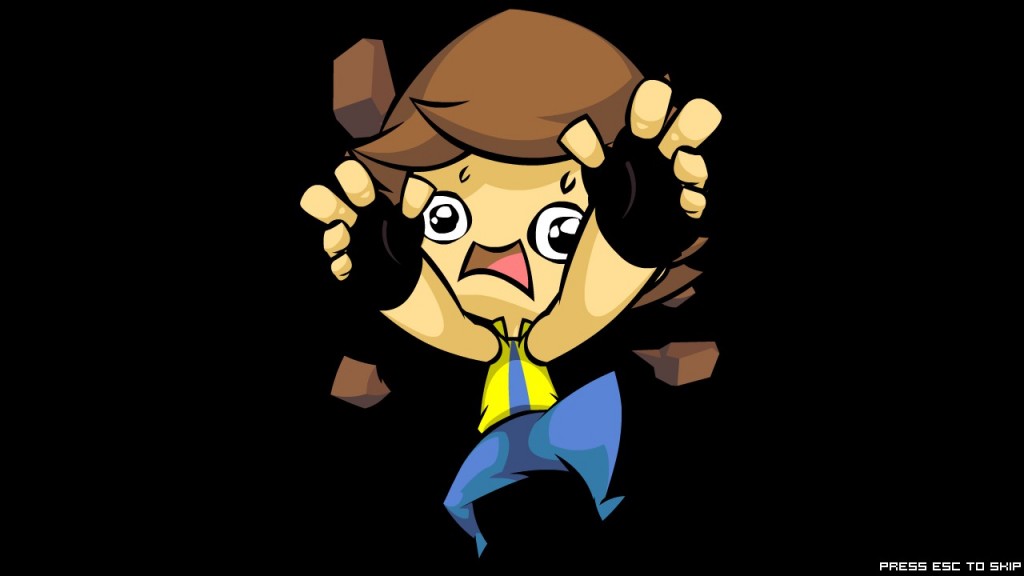 Oh, I should have mentioned that part.

Instead of being yet another game where the objective is to keep moving, as in the musical 1776, ever to the right, every level is a vertical level (hence the word “vertical” in the title of Tobe’s Something-Or-Other Adventure), and once you open the giant treasure chest at the bottom of the stage, a Metroid-style timed escape sequence starts up in which large portions of the level crumble away, prompting you to scramble back up to the top before you become the newest member of the Heroes Who Fell Down A Bottomless Pit And Were Never Heard From Again, Unless They Had An Extra Life Club. Grabbing all the loot and making it out alive is as challenging as reading the preceding sentence in a single breath, so don’t be surprised if you end up writing letters of apology to the families of the funky little rabbit-things you ignored just to save your own skin. 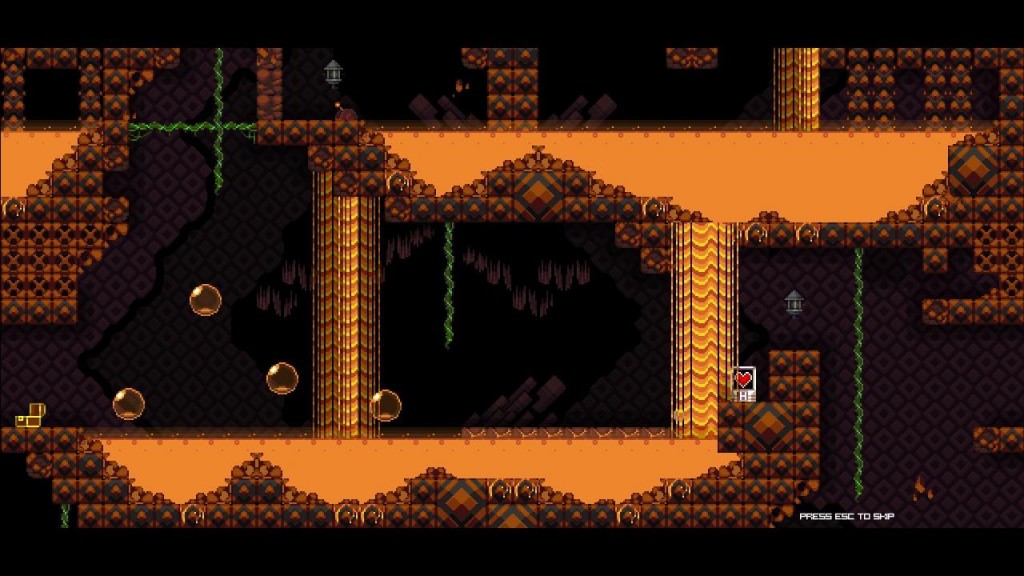 Why are there no funky little rabbit-things here? BECAUSE YOU KILLED THEM.

The escape sequences are much more hectic in two-player co-op mode, where you and a figment of your imagination play through the game together as Tobe and Nana. I assume. Once I’ve played this mode with a real person, I’ll be sure to let you know for sure. GameCola forgot to ask Secret Base to throw in a copy for a friend or family member when they so kindly offered us a review copy of their game. 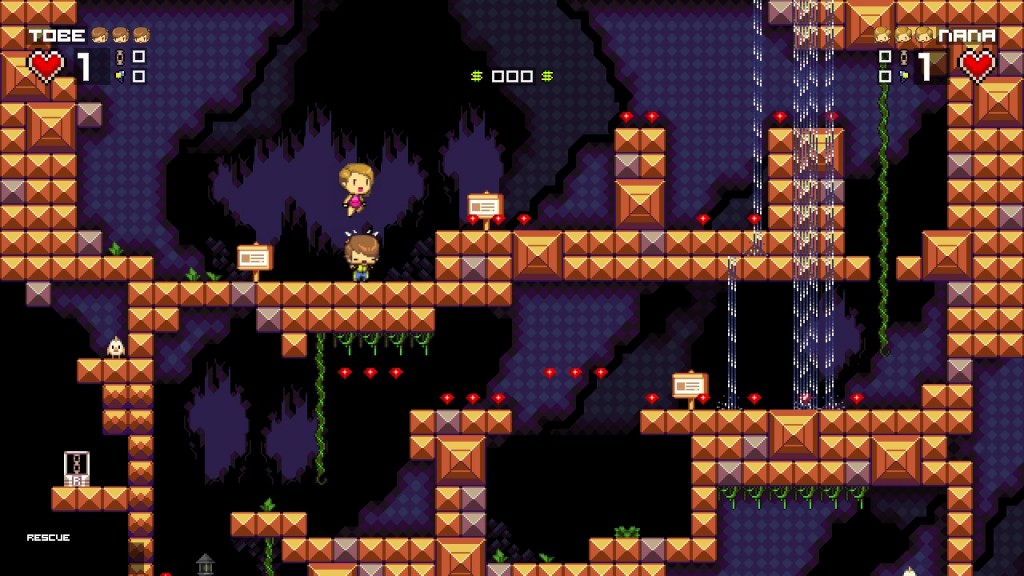 Teamwork: Jumping on your partner’s head until he solves the puzzle.

Well, then. You’ve reached the end of my review and unlocked two paragraphs of bonus material. Unsurprisingly, the bonus material is a rehash of everything you’ve just read, but the presentation is different enough that you might be persuaded to believe it adds replay value. Pretend like this is all brand-new to you when I tell you once more about Tobe’s Vertical Adventure That You Should Already Be Playing By Now. 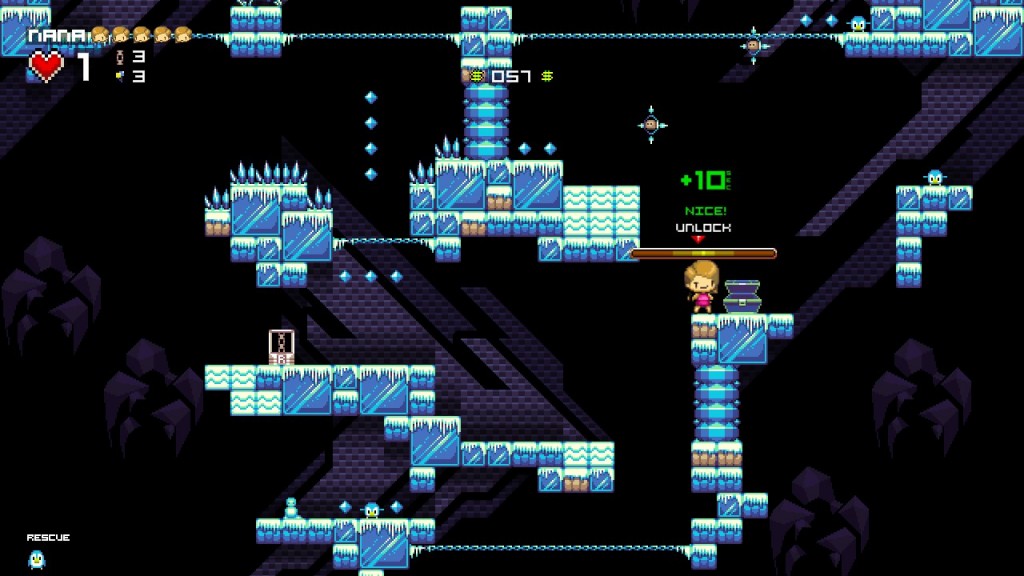 The soundtrack is tremendously catchy, the distinctive art style is both fun and nostalgia-inducing, the gameplay is appropriately challenging but always fair, and the variety of elements borrowed from other games makes the whole experience pleasantly familiar without ever resembling lazy ripoffery. Playing the same 16 levels to 100% completion in three different game modes might stir up memories of Muramasa: The Demon Blade, but the escape sequences and gameplay differences between the well-balanced characters help keep the whole endeavor fresh. 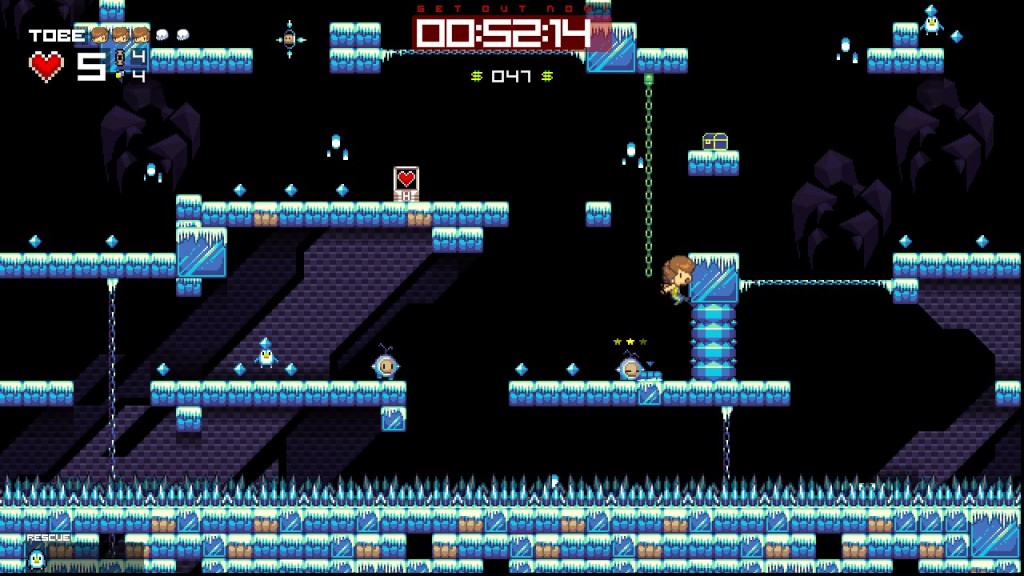 As in real life, when spikes start to rise up out of the ground, you know it’s time to go home.

Tobe’s Vertical Adventure (there, I said it with a straight face!) doesn’t bring anything particularly novel to the table, but it doesn’t have to. It’s a comfortably formulaic modern retro platformer at a bargain-bin price. It’s for people who want a few hours of nostalgia-inspired entertainment, plain and simple. If that sounds like you, please give the game a try…because if you hang around here any longer I’m liable to digress into statements like, “Tobe, or not Tobe, that is the question,” and nobody wants that.