Spoilers. Lysty dies at the hands of her father, Magnate Frey, who is possessed by an evil spirit called Moon. Now we can all go home. Good night.

As with all RPGs, you’re best just playing this game for the story; but the more I play, the more I find myself disconnecting from it. The world of Algoad is in danger from some kind of threat, so a group of unlikely heroes bands together to save it. The goddamn usual.

It is amazing that every line of dialogue, including every NPC’s nugget of wisdom, is voiced. Unfortunately, I tend to switch the voices off whenever they stop matching the subtitles. 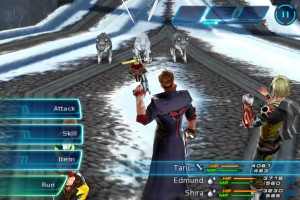 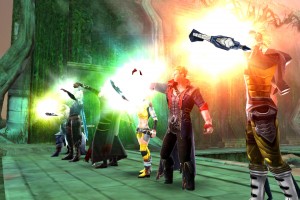 From a glance, this could be a PSP game.

So if the story’s not worth playing the game for, then what about the battles?

The team that developed Eternal Legacy has definitely played another RPG before, although I can’t quite put my finger on which one. This might be seen as plagiarism by some, because Gameloft didn’t do that much to separate the game from its one single influence. I could excuse blatant borrowing of this caliber from an indie company, but Gameloft is no indie company.

I suppose you can chalk it up to “inspiration,” then. If you’re going copy something, then copy the best. Gameloft does that very well. 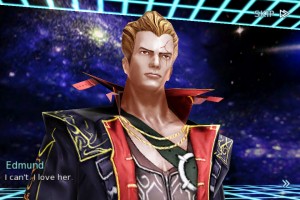 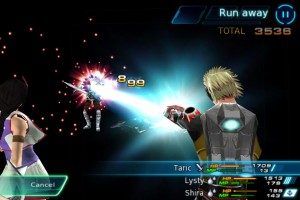 At other times, the graphics can be really bare.

Your Game is Broken

I don’t appreciate being made to feel stupid, because I can manage that by myself, thank you very much. Eternal Legacy is full of complicated menus, most of which I have gotten lost in at some point. At least they are reassuringly in-depth. The menus offer a tighter control over the RPG experience, which almost perfectly mirrors what you expect from a dedicated gaming system.

Eternal Leg of Lamb is well manufactured; however, frequent graphical errors rear their ugly heads and endeavor to spoil your immersion. You need to remind yourself that this platform isn’t designed exclusively for games before you can accept any of these faults or at least ignore them and move on. Feet going through the ground is normal, OK?

Although you can switch any character out of your party, sometimes the main character, Astrian, gets added right back in, whether it’s story relevant or not. This doesn’t sound so bad, but it gets worse. Party management in Eternal Legacy is broken. Twice I have entered a boss battle to discover that I only had two party members. The game just assumed that I was including this specific third character, and since I didn’t, I didn’t get to have a third character at all. To be fair it wasn’t a hard battle, but it’s the principle of the thing. 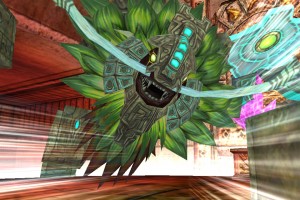 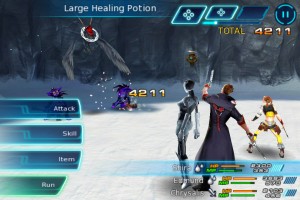 You have to keep on top of leveling everyone up equally, otherwise the several character split-offs that happen later in the game will be impassable. There is a large section where “idiot back-up team” becomes the main characters and you’re stuck with an under-leveled party. Fortunately, you soon gain the ability to travel to earlier areas for grinding.

Although grinding is present, it doesn’t take too long. There are also items and skills to make leveling up go even faster.

Once you regain control of the two main characters, you are flung into two boss battles without pause. They’re tough little bastards, and you’re not given any chance to get ready for the battles. Remember how Final Fantasy VII gave you the opportunity to update your inventory or equipment before some of the seemingly random boss encounters? I could have done with that here, because I’m not psychic—I don’t know when bosses will graciously appear out of the ether.

Sacrificial lamb Lysty is murdered at the start of Chapter 5. Do you remember what happened when that cute brown-haired girl was slaughtered in Neverending Story VII? All of the items equipped to her, including the magical gems, are returned to you. However, in Eternal Legacy, you lose the “fragments” that are equipped to Lysty when she bites the bullet. So if your extremely valuable Level Up Faster is equipped to her, then you lose it. 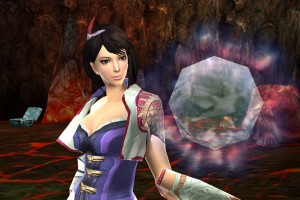 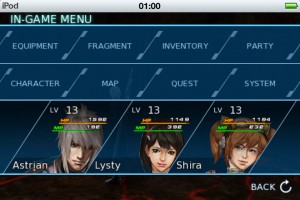 Each menu item leads to another menu. My brain can’t handle it…

This also happens during the several team split-ups, where “fragments” from your party members cannot be switched because they’re not currently in your party. Again, this means that items you might need to make the game easier are stripped from you without explanation or prior warning.

And then there’s the whole A.I. spell-casting fiasco. Any character controlled by the computer will focus on magic moves, no matter how their behaviour is set. Equipping a character with Poison, Shrink, Berserk, Confusion, etc. before a boss battle is a sure-fire route to Game Over Street. These techniques do not work on bosses, but your party members don’t know that. Even after they discover it doesn’t work, they still try it again. And again.

This poor hole in the computer behaviour has resulted in me getting through a few battles just by the skin of my teeth. The only solution is to turn on “Full Party Control” and control the whole thing yourself, though personally I think the A.I. should be way better when A.I. control is the default option. If you tell someone to be a healer in Kingdom Hearts, or in Tales of Vesperia, they become a healer. Tell someone to be a healer in Eternal Legacy, they cast Poison on the boss. There are plenty of good examples, Gameloft. Please pay attention to them. 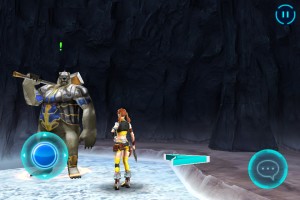 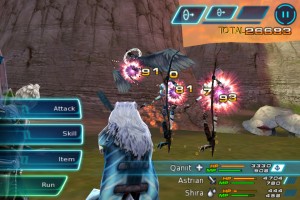 Environments, shadows, and textures are all impressive for an iOS title.

Eternal Legacy is not a short game. I have reached what I presume to be the final boss after twelve hours of playing time. The game consumes a hefty 632MB because of the high-quality music, voice acting, sound effects and textures. Personally, I believe that it is a ploy to help Apple sell more high-capacity devices.

I do find myself compelled to play on, but this final boss is pushing me to my limits. I hope that I beat him soon in order to justify blowing a single dollar on this game. (Eternal Legacy usually costs $5, but I took advantage of a Thanksgiving sale.)

I have a difficult time recommending this game. I am quite enjoying Eternal Legacy‘s broken beta-like charms, but I cannot promise that anybody with actual taste will. If you’re into diamond-studded trash such as Enchanted Arms, then I’m sure you will love this. Actually, that’s what the graphics remind me of the most, especially in the environments. The characters look great, too. Well, some of them. 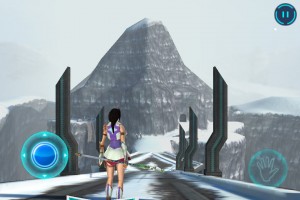 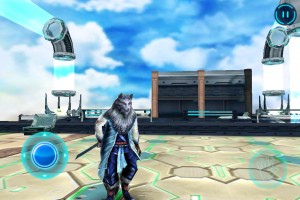 Wow, just look at that mountain, and–what the hell is that wolf thing?! KILL IT. KILL IT NOW.

I would love to see Gameloft make a spiritual sequel to Eternal Legacy. It should have entirely different characters and be set in an entirely different world. It should actually have a genuinely interesting story, instead of just focusing on trying to be another game that already exists.

Alternatively, Gameloft should consider releasing Eternal Legacy on the Xbox Live Arcade or PlayStation Network. I would be on top of that version in an instant; all they’d need to do to appease me is implement the changes I’ve suggested here.

This would basically mean remaking everything, so they probably won’t do that. That’s way too much effort for Gameloft; they’d rather just rip off something else that already exists.

The RetroCON is your basic PlayStation controller -- you have your two analog sticks, your directional pad, start and select, L1 through R4, and your four action buttons (triangle, circle, square and