I am Cornholio! I need more GameCola for my bunghole.

In between long gaming sessions of Skyrim, I’ve been pulling up my DVR to watch some MTV. In case you haven’t heard, MTV finally got something right. Instead of bringing in another useless reality show, MTV and Mike Judge have brought back Beavis and Butt-head, those adorable scamps from Highland that Bill Clinton and various other politicians have spoken out against for causing kids to be kids, laughing at the unfortunate, and burning down houses. Like their other attempts to capitalize on other hit TV shows, Viacom published different Beavis and Butt-head titles across other consoles, but they managed to stick somewhat reasonably to the Beavis and Butt-theme, unlike Home Improvement. By “somewhat reasonably”, I mean that it actually has the title characters in the game in the town they live in, but that’s about it. 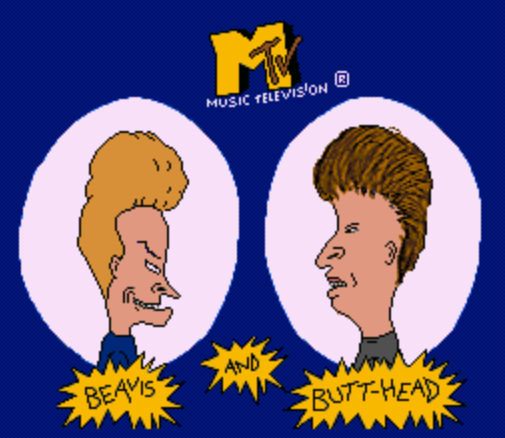 So, pop this game in your SNES hole and push that purple rectangle forward. You’re going to get some really lame wording about not trying this stuff at home or else you’ll get deported. Well, I’m already at home, trying the game. I should have heeded this warning literally and not tried the game at home, or anywhere else for that matter. Then, you’ll hear this pretty crappy low-bit rendition of the show’s theme.

Beavis and Butt-head are sitting on the couch as usual and Beavis cracks a joke about how there’s nothing good on TV. I use the term joke lightly, as I didn’t realize that it was even meant to be a joke. The show is hilarious… well, if you like toilet humor, but if you’ve never seen the show before playing the game, you wouldn’t know it was based on a comedy. Then, they see a commercial for the upcoming Gwar concert. Why the developers could use Gwar, but had to edit the AC/DC and Metallica text off their shirts, I’ll never know. They determine that if they do a bunch of cool/stupid things, they’ll be able to get into the concert for free. This plot makes no sense. Who’s watching them do these cool things? What are they doing that’s so cool? Beavis and Butt-head are dumb, but they’re better than this. In the first stage, you’re just walking through the high school avoiding getting killed by skaters, basketballs, falling lockers, and all sorts of random crap. For some reason there are pellet guns lying around which you can use to shoot people. I guess that qualifies as “cool”, but it’s just so out of place.

The game plays a bit like Mickey Mousecapade, where your partner, whether it be the intrepid and stalwart Beavis or the domineering Butt-head, is immune to damage. There are also combo moves similar to The Simpsons arcade game where Beavis will ride on top of Butt-head and swing some sort of boxing glove on a stick. Even though they take a few cool elements from some games, it’s not cool enough to get free Gwar tickets.

The game is very difficult, even on the default “Wimp” setting. When you get hit by the first skater in the game, it takes off about 75% of your health. Subsequent hits–even from the same enemies–take off much less health. What the crap is the explanation for this? It’s like someone was playtesting the game and thought you had too much health. Rather than shortening the bar, or scaling incurred damage, they just made the first hit ridiculously powerful. 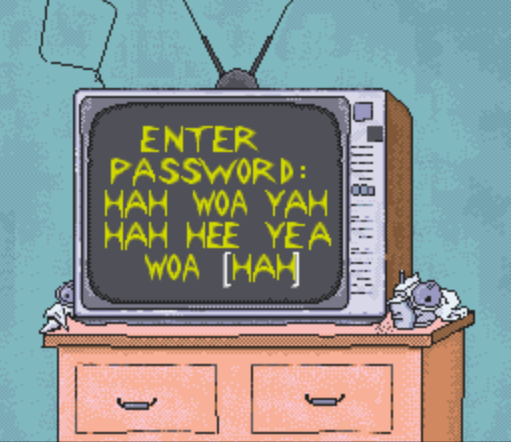 Yes, this is the actual password selection screen. You change each “word” using the select button, which took me a while to figure out without instructions. This takes you to level 2.

You know how cartoons will repeat the same background if a character is walking down a long hallway or driving down a street? Well, I guess they stuck to the nature of cartoons here and did that in the game. I lost track of how many incredibly lame “ELVIS WAS HERE” wall engravings I walked past. And what the hell is up with all the damn basketballs flying from the ceiling? I’m not even in the school gymnasium yet and it’s raining Spaldings. There’s more basketballs here than in Barkley, Shut Up and Jam: Gaiden, Chapter 1 of the Hoopz Barkley SaGa. What was that safety warning even about? I guess it’s to suggest that if you’re in school and people are skating into you for no freaking reason and basketballs are knocking you onto the floor, don’t fire back with your ray gun and don’t jump on your friend’s back and swing a boxing glove at people.

The second stage isn’t any better. You’re walking on the street past the same three houses over and over with more skateboarders (I guess it makes more sense with them outside), but there’s like 20 different bulldogs trying to maul your face off and burst through the fence and birds shitting rotten eggs at you while trying to knock down a bunch of old ladies pushing shopping carts to kill you. Why are they pushing shopping carts through a residential area!? Why are they all trying to kill you? My guess is that they’re also trying to win Gwar concerts by doing cool/stupid things. Maybe Beavis and Butt-head should just put in some more hours at Burger World and buy the damn tickets.

It’s bad enough that this game has almost nothing to do with Beavis and Butt-head. I’m tired of these stupid action games where you just walk forward, avoiding patterns of random junk flying at you. Why is it so difficult to make a decent side-scrolling action game? Why do the enemies have to repeat so much? Well, Realtime Associates, who have a pretty poor track record… I guess they don’t make real-time RPGs? And just who are they associated with?

Bill Clinton had one thing right: too much Beavis and Butt-head will cause children to burn down their houses. He was talking about this game though, not the show, since playing it dissolves your sanity and faith in your fellow man.