In a tucked-away corner in an otherwise unremarkable part of The Magic Kingdom in Walt Disney World, a sign on an old fire station reads:

There’s no line to get in—the game’s still in beta, so nobody really knows about it—and as the surly teenager working behind the counter quickly mumbles some instructions at you, checking his hair in the reflection of a display case to make sure it’s still appropriately moppy, you’re not entirely sure what you’re getting yourself into.

Here’s a hint: Think Magic: the Gathering meets live-action role-playing, meets scavenger hunting meets videogaming, and it all takes place in the Happiest Place on Earth.™ 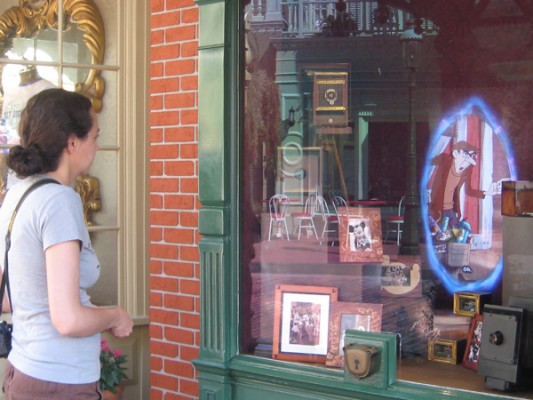 Sorcerers of the Magic Kingdom is a new attraction that debuted earlier this year in the Florida version (aka, just the version) of The Magic Kingdom—timed, I assumed, to coincide with my trip there just last month. It was designed by two Imagineers™ named Jonathan Ackley and Larry Ahern, who you may know as—I swear to God this is true—the two actual lead creators of the #7 greatest videogame of all time, Curse of Monkey Island. It’s purpose: to cast players in the lead role of their very own real-life adventure, and to give bored kids something to do when their younger siblings insist on going on It’s a Small World for the 18th time.

At the start of the game, you’re handed a map of the Magic Kingdom and a free set of cards—one key card, and several spell cards—then thrust in front of a magic portal to watch a brief tutorial, with instructions at the end of where you’re supposed to go next. Each game starts at a specific portal, hidden somewhere within the park. They only activate when you wave your key card in front of them; until then, they’re just part of the scenery. They could be a window, or they could be a…actually, most of them are hidden in windows, though we also found one inside a fireplace inside a restaurant, and one that was cleverly (and slightly creepily) concealed within an art gallery: 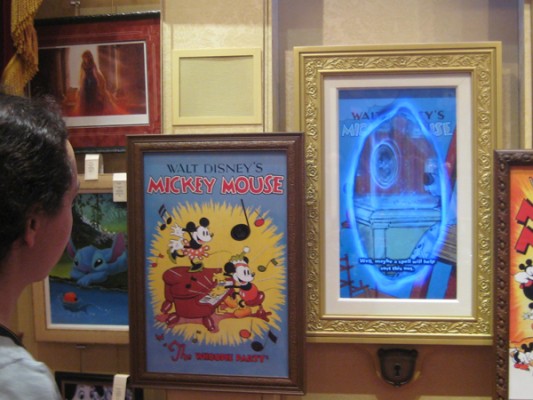 Once you find the specified portal—which is no small feat, except when the game’s backed up, and there’s a line of little (and not-so-little) sorcerer’s queueing up at each one—you wave your key card in front of a lock located somewhere nearby, and a gateway to another world opens up: one where Disney’s most vile villains are teaming up to steal several powerful crystals that are also hidden within the park. If these crystals were to fall into the wrong hands, it could spell doom for the entire Magic Kingdom. Luckily, the park’s first line of defense is you, and your elite squadron of Pokémen.

From there, you travel from location to location, opening up portals throughout the Magic Kingdom, watching a little cartoon at each and then waving a spell card in front of it to send any baddies that lurk within packing. Theoretically, you’re supposed to carefully pick which cards you use to effect the most damage, but we found that we were able to score one-hit kills on everything by just flashing the first card we grabbed from our stack. (The clerk later assured my wife and I that this is because the game’s on “easy mode” while they’re “beta testing it,” before looking around furtively to make sure there weren’t any cute teenage girls who overheard him talking like that.) The game’s total lack-of-any-challenge made it pretty boring at first, although we quickly learned to derive more enjoyment from the exploration aspect of the game. I’m no Disney World newbie, but this game had us visiting small corners of the park that I would’ve never even thought to explore before (although for some reason, quite a few of them seemed to be located in or near gift shops. That’s weird.). 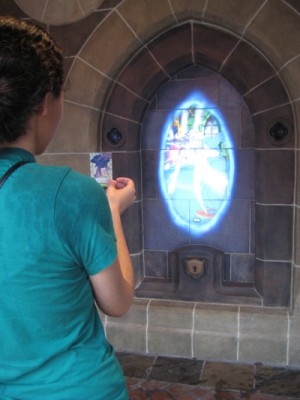 My favorite part of the game was when we met a kindly old shopkeeper nearby one of the portals, who asked us how our “adventure” was going, and then gave us tips and tricks about the game. (“Try using the same card more than once! I think you’ll like what you see!”) It was like talking to a real-life, honest-to-God, NPC. I bet if we’d talked with him a second time, he would’ve given us the same exact spiel, word-for-word.

Actually, it’s a toss-up: My other favorite part was when a little boy was so mystified by us opening up a portal into one of the stores that he actually lost his parents. They just kept walking, Home Alone-style, while he stopped to stare; we almost had to get the Happiest Police on Earth™ involved to try to find them.

As much fun as we had, though, I wouldn’t recommend that anyone visit the Goddamn Most Joyful Place You’ll Ever See™ just to play Sorcerers of the Magic Kingdom—especially now, when it’s on baby mode and literally the only challenge you’ll ever find is people trying to cut your place in line—but it’s a great follow-up activity if you’ve done everything else in the park already, and you want to discover what other wonders the Magic Kingdom is hiding. Pick it up today on XBLA Pre-order it now on Amazon.com Actually try going outside of your house for once to play this real-life videogame.

The awesomely-acronymed Tales of Monkey Island: Lair of the Leviathan is—if you haven't been paying attention to the adventure games scene, videogame news in general, or GameCola.net—the third in