You know what? Deadly Premonition gets a lot of undeserved shit, and it makes me angry. Everyone has to put up goddamn quotation marks around praising it, like it’s so bad it’s good. I’m tired of everyone saying, “Oh man, have you played Deadly Premonition? The graphics are terrible and the gameplay is horrible, but it’s just so clever! It’s ironic, you know? It’s a wink-wink kinda game!”

Well, I’m here to say: fuck all of you. I un-ironically love the shit out of this game. I love it so much that I played through it once with an FAQ to make sure I didn’t miss anything, then a second time blindly just for myself. Then, when I told Paul—the man with THE beard—that I was going to review it, I started a third time. And I’ve almost finished it. Again. So, one last time, fuck everyone who says this game is just soooo adorable. It IS clever. It IS smart. It IS fun as hell. And you should play it. Right now. 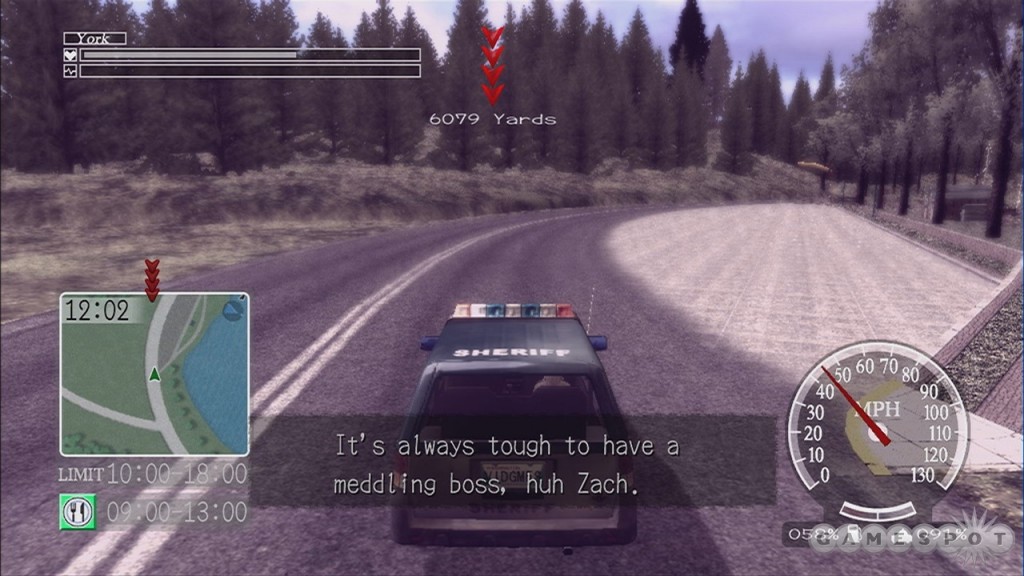 I’m not going to lie—you’re going to see a LOT of this car. Although you can jack any ride you want. And yes, you have to get gas when you run low. At the gas station. When it’s open. I told you—immersive!

The opening alone, before your fingers have even touched the first button, set the stage for what’s to come—horrific, yet hilarious. That defines this game down to its very core, and if you get it—man, if you’re in on the joke, ya know?—then you fucking get it! A couple of twin boys come across a woman basically lynched up in a tree, and their hillbilly grandfather comes wandering up but doesn’t notice the horrible corpse directly in front of him with the snake slithering up between her ample breasts and her chest cavity split open until he’s like, five feet in front of it. Ha ha ha, so goddamn hilarious! But also, dare I say, horrific? I dare!

Our hero is FBI Special Agent Frances York Morgan (we all call him York). His other personality is Zach, and he talks to Zach like he is sitting right next to him the whole time. He is, in fact, bat-shit insane and a complete schizophrenic. But my christ, the scripting between the two personalities is so well done, so perfectly written, that he feels like a secondary character. The banter between the two of them, as they discuss obscure 1980s sci-fi and horror movies, is downright inspired. At several points, he goes straight into Twin Peaks surreality and is in basically a dream world, talking to the twins and just going completely bonkers. I love it! This game has such huge balls, and the developer and publisher have such faith, that you can’t help but root for this game to succeed. 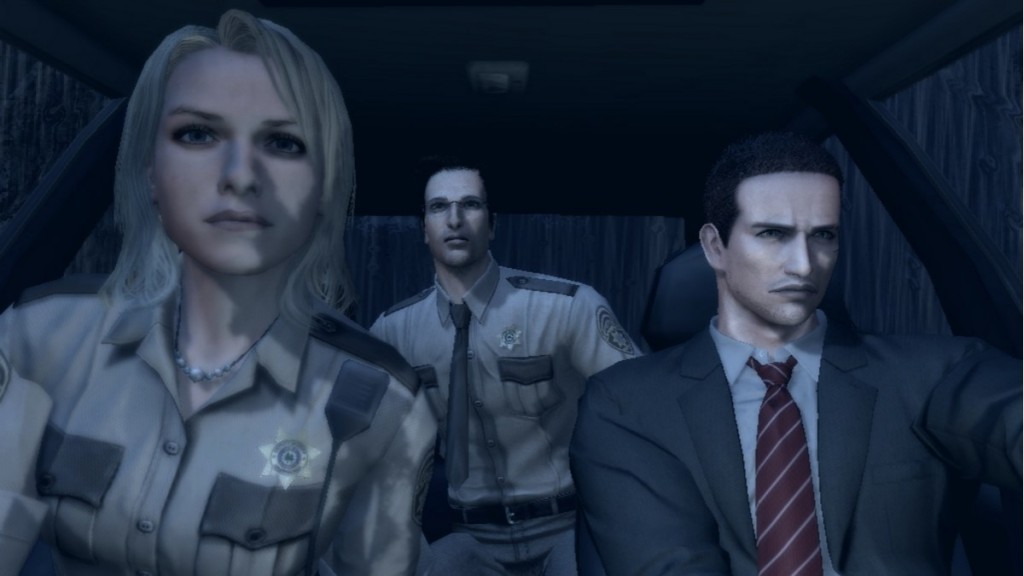 That’s me on the right there, and the hot sheriff I want to nail on the left. And some dipshit in the backseat.

In fact, what works about Deadly Premonition, and ultimately what leads to the score you see at the bottom of this page, is atmosphere, which it has in spades. It reminds me of the tone you got from Silent Hill 2, one of the best horror games ever made. The whole fucking town is atmosphere, the rain constantly pelting down on you (in fact, it was originally titled Rainy Woods). Every character is well written, and what it does so very right makes up for what it does so very wrong. Yes, the driving is endless, eternal and boring (as a matter of fact, I started having my girlfriend’s kids do the driving sections for me—it seriously could take upwards of fifteen minutes to get from location to location. They fucking loved it). Yes, the lack of a map will have you printing one out from the Internet. Yes, the graphics aren’t the best in the world. And still…

Still, I love this game like no other. Unraveling the mystery of the Raincoat Killer, making new relations around town, romantically wooing the ladies. The constant rain, the iconic northwest setting (I suppose it doesn’t hurt that I live in Portland, Oregon), it just all adds up somehow. Every place feels right, like it’s meant to be there. From the mini-mart, to the high school, to the hospital, to every little house littered along the landscape. I have rarely played a game that felt so exciting, enthralling and adventurous. And in-between solving the mysteries, you get to investigate the town, the people. Just drive around Greendale, maybe go out in the countryside. Look for the red medals sprinkled all around the landscape. Thirsty? Fine—grocery store, here we come. If it’s open, because again this is a living, breathing world. Let me tell you something. I own every single Grand Theft Auto from 3 on, and I’ve never finished a single one of them. I just don’t really believe their worlds; I never get engrossed enough to care. I would kill my own grandparents to have Alan Wake and Deadly Premonition come together somehow, in the future. I hear there’s a director’s cut of this game coming to the PlayStation 3 early next year. I will have that game, and I will happily play through it all over again.

Man, just look at that scary fucker up there. Brrr! He’s so evil he kills your ass with an axe instead of a gun.

Just imagine this: you’re a goddamn FBI Special Agent. You get sent to a small, open-world town to investigate a series of murders. You are totally free to do whatever you want. There’s a day-night cycle, a 24-hour clock ticking away. Businesses are opened and closed at normal business hours. You are doing it all. You have to find the clues, drag out information from the locals. You have to drive around, work with the local sheriff. It’s all up to you, and holy shit if you don’t feel like an investigator when you’re doing it. There’s even a “start profiling” button that kicks in when you’re hot on the trail.

I’ve purposely kept the story vague, because the smarter of you out there are going to go immediately pick up this game for a meager $10-$15 and have a love affair with it. I don’t want to spoil anything, but I haven’t even touched on the drag-queen murderer, the gas-spewing bell tower, secret government experiments, faceless shadow demons, and those two twins, Isaach and Isaiah. Unlike Heavy Rain, which this game reminds me of, when you find out who the Raincoat Killer really is, you’re actually surprised. In a “no fucking way!” kind of way, not a “you have got to be shitting me” kind of way.

Look how cool I am. Just look at me! The game begins with York explaining that he got the scars on his face from a lady with razorblades in her fingernails from his last case. Bad-fucking-ass.

There are some games that just touch you, right at that special spot. Uncharted 2. Halo. Shining Force. Resident Evil remake. Alan Wake. Eternal Darkness. These are special, important games to me. They mean something. They define a time in my life. Deadly Premonition defines this time, right now. It has such an involving story, such wonderfully written characters, and such a wonderfully realized town in Greenvale. I’m telling you, I’ve been to this town. I’ve met these people. Swery 65, the creator of this bizarre, wonderful, immersive little gem, knows just how to hook you. I’d give anything to un-play this game, just to play it again for the first time. Fuck the graphics. Fuck the physics. Fuck the combat. But love, with all of your heart, everything else. Love how quirky the conversations are. Love the first time all the locals are gathered together at the school and you get free range to talk to them all. Love profiling, and figuring out the clues. Love Zach, that cheeky fucker. Love to be in love with a game again.

Why am I even bothering to review this? Crazy Taxi is Crazy Taxi. You either know it or you don't. I can safely say that if you don't know Crazy Taxi, then you don't want this version. This version is