Every time a new comedic adventure game comes out, you hear the same story:

“The best thing since Grim Fandango!” – Joystiq.com
“A worthy heir to the LucasArts throne.” – GameSpot
“Finally, adventure games are back.” – Goddamn everyone.

It’s always the same, with every game, no matter the quality. If it’s at least trying to be funny, it’s the new Day of the Tentacle; if it actually makes you laugh, it’s “the game we’ve all been waiting for for decades.”

Folks, adventure games never went anywhere. We’ve been getting Cevilles and Unwritten Tales and Runaways up the wazoo ever since the Fall of LucasArts. But while each one has been referred to by some desperate reviewer as “the second coming of Monkey Island,” it’s never, ever, actually been true. 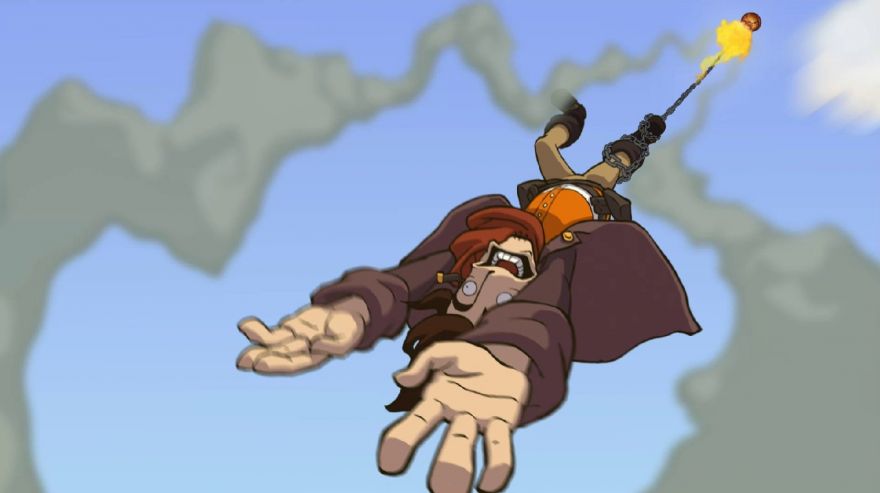 Deponia is the story of a self-centered jerk living in a land of garbage—but unlike in, say, Runaway, that’s exactly what he’s supposed to be, at least at the start of the game. You’re not really supposed to be rooting for poor Rufus; you’re openly laughing at him, and the situations he gets himself into by being (1) dumb and (2) egotistical. He has ambitions far beyond just living in his (ex)girlfriend’s house and being nagged at to wash the dishes, and he thinks that, as long as he’s living in Deponia, he’ll never really be able to do anything. By the time we meet him, he’s already spent much of his life plotting his escape to a far-off world in search of new adventure, and that’s exactly where we join him, at the tail-end of his latest scheme.

All we need to do now is assemble a rocketship, using mailboxes, fireworks, and an ill-fitting battery. You know, typical adventure game stuff.

From there we crash-land on a flying starship, meet a girl (as well as some imperial troopers with mechanical beards), and Rufus actually gets to experience some of the adventure he’s been searching for all his life—but he’s so singularly focused on achieving his dreams that he never really notices he’s already living them. Who can’t relate? 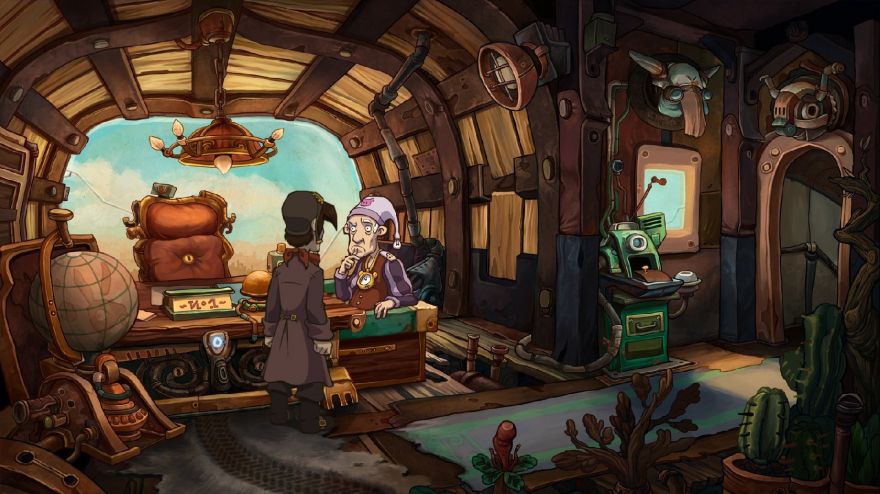 The game’s humor relies a lot on surprise, both in terms of “I can’t believe he just said that” and “I can’t believe I’m doing this.” One of my favorite parts of Deponia is when you’re trying to make coffee to revive the aforementioned girl (who’s unfortunately relegated to the “damsel in distress” role for the majority of this game, but there’s a sequel out already, so here’s hoping), and one of the ingredients you need is “energy-rich water.” Most of the water in Deponia is toxic sludge comprised of years’ worth of garbage run-off (and in fact when one character finds a “water vein” in his basement, he’s suddenly a millionaire, and the next time you see him he’s got his feet propped up on a couch, lounging in a bathrobe swirling a glass of champagne), so of course, you’re stuck with only one option—battery acid. Which you get by jabbing a dentist’s drill into a car battery, which you’re only able to access after swearing up and down to someone that your name is “Sugarpuff” and your favorite color is pink. (And after many conversations in which this person can never remember what your name is—you’re now “Sugarpuff” to him forever.) Also, if you interact with the battery acid just by itself, Rufus sticks his finger in it and then takes a lick, just to make sure it’s actually acid. The game just kills it, over and over, with layers of jokes building off of each, and running gags that start of the beginning of the game and pay off at the end, and a hobo with a guitar singing songs in between chapters, and Rufus just being a huge dufus the entire way.

But the best thing about the humor? There aren’t any pop-culture references. There aren’t any of those “it’s funny because I said Star Wars” jokes that nearly all contemporary adventure games are bound to include apparently by German law; the game just…doesn’t do it. It relies on its own clever setups and punchlines and its own wacky situations to carry themselves, instead of assuming that the only way to make someone like your game is to reference other things they like, too. No *ahem* OBJECTIONS here! 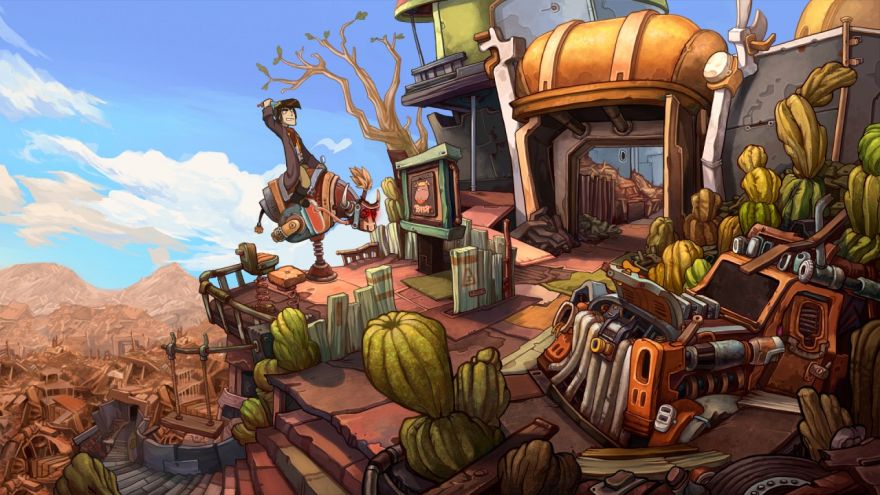 The game also rarely tells you that you can’t do anything. It’s never “Why would I do that?” if you try to, say, use moist towelettes to clean up some dust; instead, Rufus complains that he doesn’t want to do it that way—and then forces you to do something that’s way more complicated and dangerous.  That’s not to say the game has unique dialogue for every interaction; basically any time you try to do something that’s out of reach, Rufus just remarks that he’s “saving his telekinetic powers for later.” But instead of just dismissing your idea, the game has fun with you; instead of telling you “that won’t work,” the game twists it such that Rufus is the one screwing up, not you, and you get to laugh at him rather than feel dumb about it.

Other high points: The art is beautiful, the music is hummable (if not memorable), and the voice acting—particularly the lead character’s—is so good that it’s given me greater appreciation for what voice acting can do to uplift a game’s script. As you’re playing Deponia, leave the subtitles on, and try to imagine how much different the game would be if you were just reading it, instead of also hearing it. The actors give this game life; they add greater meaning to what their characters are saying, from the “pirate” in his sad resignation to Rufus’ antics, to Rufus himself, whose confused yet indignant response to “It smells so bad it could be your deodorant” was simply “…..My what?!”

I mean, “confused yet indignant.” When’s the last time you were able to hear such subtly in the voice acting of a $20 game—one which wasn’t even in English to begin with? 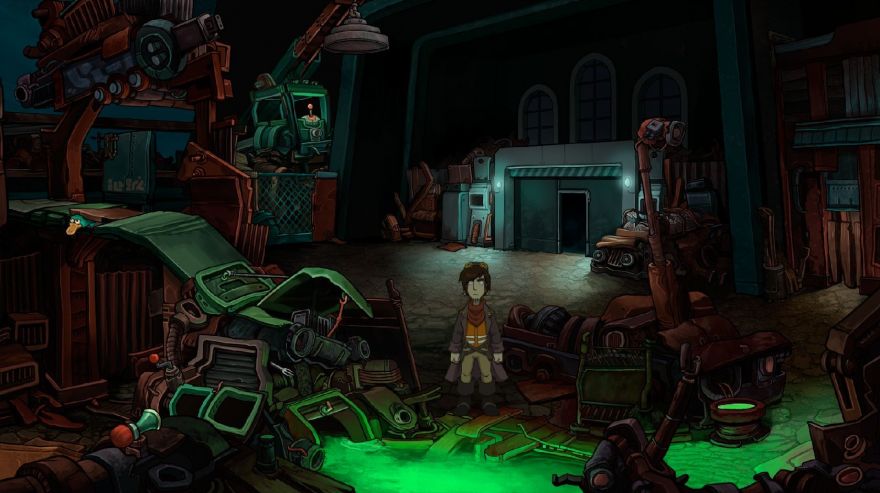 One area where the game does fall short, though, is in its moon logic. Deponia has its fair share of butt-scratchers, solutions you end up looking up online, only to discover that, of course, you have to put the cat on the keyboard. Solutions you never would’ve thought of on your own—or maybe you would’ve, but it would’ve taken you hours, and you would’ve just felt annoyed at the end, rather than accomplished. There also isn’t any kind of hint system, and the game doesn’t hold your hand that much, either; frequently you find yourself just doing things because you can do them, not because you have any sort of goal in mind. Eventually you’ll figure out what Rufus is trying to accomplish, but by that time you might’ve already solved the puzzle via random clicking.

There are also some problems with the game’s localization. Especially if you’re reading the subtitles along with the dialogue, you’ll notice missing punctuation, misspelled words and oddly used phrases, although the game’s fantastic voice acting does much to cover that up. But the greater issue is that the localization team seems to have translated a lot of the game’s (original German) dialogue literally, instead of you know, trying to localize it—frequently out of nowhere, Rufus will say something like “That sure is a duck that can’t quack” when you’re looking at a socket wrench, and you’ll just have to go with it.

But…that’s basically it for criticism. The only problems this game has are problems that almost all modern-day adventure games have—and Deponia has them less. It’s not perfect, but it is goddamn close. 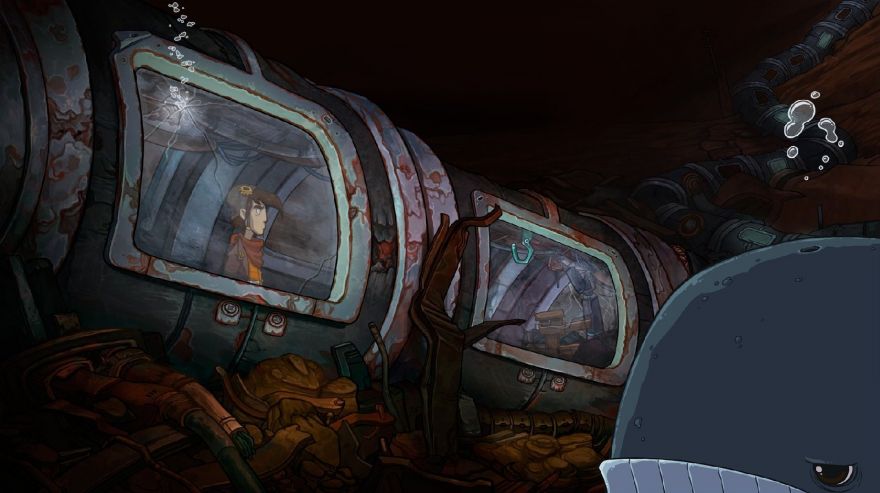 I've recently decided that I want to keep GameCola's level of cursing to a minimum.