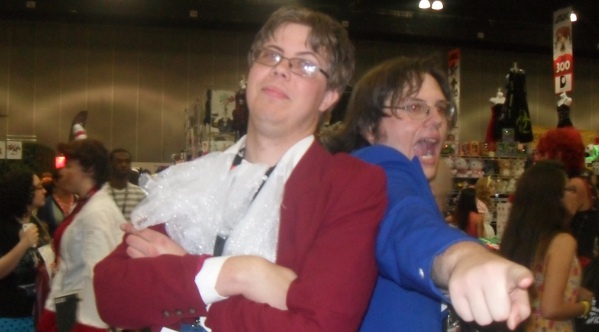 So apparently some people are noting how much I report about Phoenix Wright. Indeed, some have gone so far as to mockingly propose that the website should be renamed PhoenixWrightCola.net, which it totally should (kidding, boss).

Anyway, I’ve decided to take this article in a different direction, since people seem to have “objections” with my current style of reporting. So I’ve decided to combine my “ace reporting” with another little talent of mine…

The beautiful and vivacious Ema Skye cosplayer Diana Gray trooped up the stairs of the Los Angeles Convention Center, followed by two more Emas, Alice from Pandora Hearts, an anime schoolgirl, and Kiki from Kiki’s Delivery Service. “Okay guys,” she said, trying to rally the troops. They’d been waiting in a line to get in for almost three hours and they all were hot and tired, not to mention practically dehydrated. “This is what we came for, right? Shopping!”

The motley crew proceeded through the doors of the exhibition hall and stopped, awestruck. It was huge! People of all shapes and sizes in brightly colored costumes pushed by them, some recognizable, others not so much. It was hard not to be overwhelmed. “Okay, let’s go this way!” Diana said, beginning to wind her way through the crowd toward the back of the hall, where Artist Alley was located.

In Artist Alley, the group wandered around the tables, admiring the artwork (or in Diana’s case, alternately lamenting over her lack of artistic ability and buying every piece of Phoenix Wright fan art in sight). A few hours later, they emerged, laden with plastic bags of art and manga. “Let’s head out to those food trucks we saw and grab something to eat,” Diana suggested, and the others agreed wholeheartedly.

As the cosplayers walked down an aisle, Diana suddenly stopped. “Guys,” she whispered tremulously, pointing with a shaking finger. The others followed her sight line. To their left was a booth full of red sofas and chairs and the back was emblazoned with the logo for Phoenix Wright: Ace Attorney – Dual Destinies.

“Hello ladies!” said a chipper employee, approaching the group. “How would you like to try the demo for the latest Ace Attorney game?”

Diana couldn’t form words. Her mouth opened and closed as she finally fully took in the many people holding a demo 3DS, their ears covered with Ace Attorney headphones.

“Oh, I’m silly. Of course you do! I mean, look who you’re dressed as!” the lady said, laughing and looking the three Emas up and down. “Wait right over here, please.” She ushered them over to a booth across the aisle, where Diana proceeded to fangirl like there was no tomorrow.

“Oh my gosh, oh my gosh, oh my gosh! Guys! This is it! I am actually getting to play the thing that I’ve been writing about for so many months! Wait until the guys hear about this!” (There is no way to accurately express the extent of my fangirling. You had to have been there.)

“Alright, who’s going first? We have one opening,” the lady called across the way. Diana’s group of friends shoved her forward. She was put in the corner. Slipping the headphones over her ears, she glanced over the instructions (pretty standard), then started the game.

It was beautiful. The animations were stunning and so detailed, especially in 3D. The demo was the first part of the first case and features returners Phoenix, Apollo, and the Judge, as well as newbies Athena, Juniper, Payne, and Ted. The new courtroom animation for the beginning of trials looked gorgeous and the music was awesome. Diana was extremely pleased that Capcom reverted back to the original 2001 themes, only made them newer and more orchestrated. It sounded amazing.

Diana began the trial, moving quickly and effortlessly through the testimony, but taking time to test out the new features. The button for reviewing what was just said proved extremely useful for Diana’s short term memory, as she’d been sure it would. Finally, during the defendant’s testimony, the part that Diana was waiting for arrived: the Mood Matrix.

She tapped her chin with her finger, trying to simultaneously play the game and compose an article in her head that wouldn’t contain too many spoilers. The Mood Matrix was…not quite as bad as she thought it would be. If anything, it was too easy. Hopefully that was just because it was the tutorial case, she thought hopefully. It was pretty straightforward: listen to the testimony, look for conflicting emotions. It reminded Diana a little bit of the Perceive system from Apollo Justice. She decided to keep a closer eye on the development of the Mood Matrix and see how it was changed.

After approximately ten minutes, Diana was done. She waited for her friends and when they appeared, she eagerly began discussing the demo with them. None of them were fangirling quite as much as she was, but it was okay. They seemed to share her views, except for the one about paying a large amount of money to be able to keep the headphones. Diana was the only one that was THAT crazy.

“Oh, are you ladies done?” the Capcom employee asked. The group nodded, Diana unable to hide her huge smile. “Here, you can take these fans for trying the game! Thanks so much, I’m glad you liked it!” The lady handed them all fans with the Dual Destinies logo on one side and the Monster Hunter logo on the other. Diana examined it, frowning.

“Well. We could have used these about three hours ago!”

So there you have it. My account of when I played the demo of Ace Attorney – Dual Destinies. Overall, it looks and sounds beautiful. I’m just nervous that the Mood Matrix isn’t going to turn out up to par. Regardless, it was very intriguing. I can’t wait to see the finished product and I hope all of you can get your hands on that demo at some point.

Until next time, faithful readers. Fangirl out.

Sure, E3 is cool, but is it an esports law conference?! Di fills you in on what you missed.