Do you remember those school portraits from the early 90s with red and blue lasers shooting from your head? Of course you do! Laser Invasion was a natural byproduct of this era. Looking for an awesomely-named NES title sporting three unique gameplay styles, Zapper, and LaserScope support? Well, look no further, it’s time to invade…with lasers!

Can I just get a video game with some frickin’ laser beams attached?

The game follows an elite pilot/commando across four missions with three modes of play each. Truth be told, there aren’t any lasers to be seen, but presumably you’re going to take out a terrorist that will invade every world power with deadly lasers. Similar to what we see in Bad Dudes, some army guy will give you a vague description of what you must do to save the world.

First, you’ll fly to a base in a gunship, blasting enemy planes, helicopters, and missiles. The gameplay is very similar to Top Gun, another Konami title. This time you’ll have an on-screen map, more useful radar, and since you’re in a helicopter, the ability to hover and land vertically. You have the ability to stop off at a friendly base along the way to refuel and rearm, and you also have the option to choose your missile type and your auxiliary item (chaff or extra fuel). It’s pretty awesome to have some customization in what you have—a vast improvement over Top Gun. Landing is pretty nifty, and is incredibly easier than that of Top Gun. So, right off the bat, this blows Top Gun out of the water. But, that’s just the first gameplay mode. 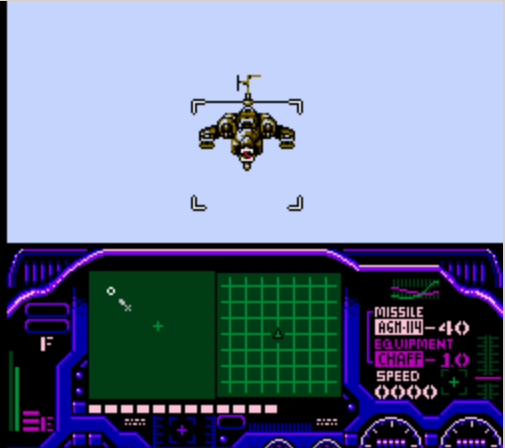 After landing at the enemy base, you’ll be on foot, side scrolling along automatically, similar to Operation Wolf and Gotcha! The Sport! (if Gotcha! didn’t require player 2). 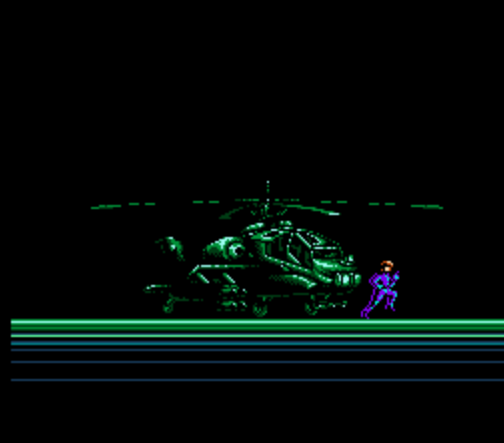 Various enemies types will jump out of the sky and sides ad nauseam, and you’ll have to shoot them down. Beware of the machete dudes, who are more deadly than any dude with a gun. Here, you can use an NES accessory in port 2, or just go at it with the controller. You have to fire pretty rapidly, and since modern TVs don’t support the Zapper, you’ll probably be better off with the controller. 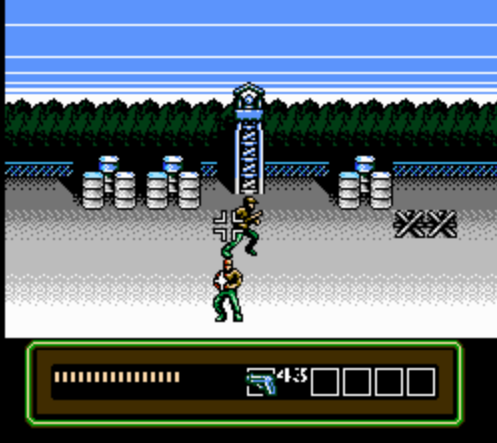 After you’re finished scrolling, you’ll be in the base interior. Here, it’s a combination of Wolfenstein 3D and the awful “indoor” sequences in Goonies 2. You’ll have to search for a POW or something else in a maze of corridors. Thankfully, there’s an awesome map right on the screen! Most games make you pause to view the map if there even is one. Here, you have your inventory, map, and gameplay screen right where you need it. As you progress in the maze, you’ll trip alarms and have to fight a bunch of enemies jumping at you as you stand still. The alarm thing is a little weird since there’s no way to avoid tripping it. Plus, you just stand there and take shots. Shouldn’t you be taking cover? Again, you’ll face those machete bastards. Those really sap your power, and they pop up out of the blue and scare the crap out of you, so be ready for them. 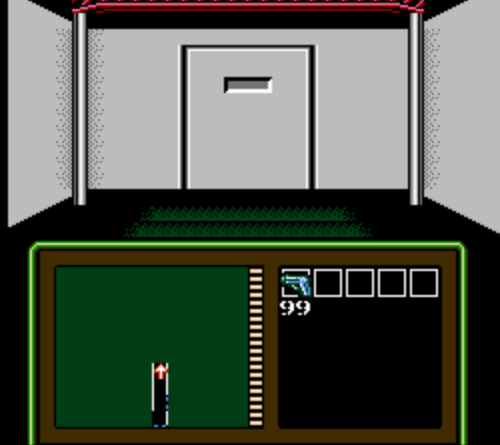 We usually don’t see a game that can do all these different gameplay modes and still be fun to play. In fact, the only other titles I can think of are Star Wars games, Rebel Assault and Shadows of the Empire. A lot of game developers have trouble just getting one gameplay type right, and here Konami pulls an ace out of their sleeve and does an awesome trifecta of gameplay types and without resorting to a big name franchise like Top Gun. What’s more, they obviously learned their mistakes from Top Gun and improved on the flying portion immensely. Plus, throw in excellent graphics and sound, and…holy crap a 3D perspective on the NES! They clearly squeezed all they could out of the Nintendo here. Still, with all this, it somehow doesn’t quite rank up on there as the most fun game, so it might only appeal to a select number of people. 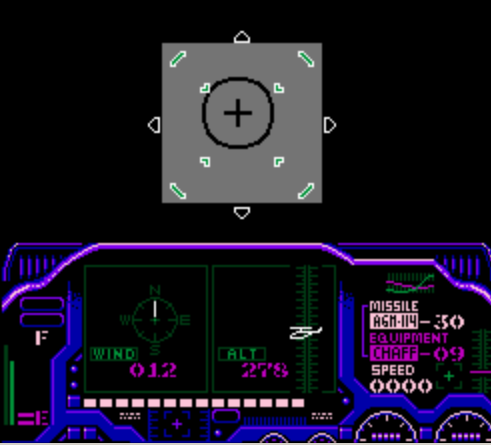 Landing is so much easier compared compared to Top Gun. I don’t think you can die, either!

The game was also released in Japan, and sported a password system. In America, we had no such luxury and had to resort to hardcore playing (and increasing the starting number of lives). Those Japanese are always one step ahead! It would have been great to have a password or save system here. While there’s only four levels, the levels are extremely hard and you may get too frustrated to continue.

Anna rants about a personal experience she had with a Reddit troll.