Here we are again! Welcome back to “Localization Anxiety“, the column where we talk about all kinds of localization shenanigans that happen whenever a game is or isn’t transferred from one culture to another (mostly from Japan to America).

And like before, we’re going to talk about a game from the Nekketsu series: Crash ‘n’ the Boys Street Challenge, known in Japan as Bikkuri Nekketsu Shin Kiroku! – Harukanaru Kin Medal.

First off, let’s talk about the game’s title itself. Crash is the new name of the series’ main character (known in Japan as Kunio, as we talked about a while back). Let’s remember that this is not the first time he had to be renamed in order to appear in a western localization: he was called Alex in River City Ransom, and Thomas in Super Dodge Ball.

Oh, yes! He’s also the main character in Super Dodge Ball, but once again localization got its hands in there and managed to make us completely unaware that the character so happily greeting us on the game’s logo is Thomas…I mean Kunio…! Or Alex from River City Ransom! This is confusing… 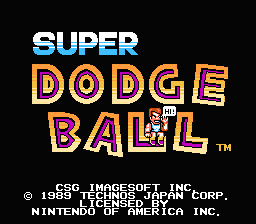 Look! Thomas is on the game’s logo…who the hell is Thomas?!

Anyway, let’s get back to the game we’re actually talking about. As the title implies, this game is about “Crash ‘n’ the Boys”, and “the Boys” are the rest of the Boys from Southside High who defeated Todd Thornley and his entire snob friends from Hillside at the All-City Track Meet once again. 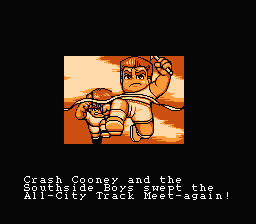 You can bet this sports game comes with its plot too.

That’s why Todd and his dad from Thornley High plot to challenge Crash ‘n’ the Boys to a rematch in a contest with no rules in order to show them up. Basically, the localization did its best to make you believe that these guys don’t usually engage in these kind of unsanctioned competitions (Like Nintendo World Cup Soccer and its Japan-only sequel, which we’ve talked about before), and this “Street Challenge” is something totally new for them.

The All-City Track Meet they mentioned in the beginning was actually another form of aggressive competition itself; they’re talking about this game’s prequel, which wasn’t localized to western audiences, where…wait…what’s going on? I feel like everything is fading away, is this some kind of flashback…?

Also known as Technos Cross-Country, is a rather simple game where characters from different High Schools from the Nekketsu series compete in an athletic meet sponsored by Mamoru Toudou from Reihou High. 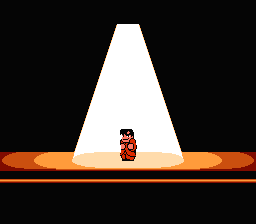 Toudou became the new school president after the events on River City Ransom.

There are four different events in this competition: Cross-Country, Obstacle Course, Ball Breaker, and finally a Fighting Tournament. The first two of these events are basically a race, but not only you must try to get to the finish line first, you must also score points by hitting your opponents, so it’s highly encouraged to elbow and shove everyone on your way to the finish line.

The race takes place through different urban environments: the street, rooftops, and even through the house of an unsuspecting family. 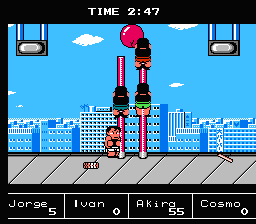 It basically involves all the teams climbing a pole and kicking each other in order to break a ball placed on the top of said pole.

Finally, the Fighting Tournament is a brawl between a representative from each school, and you have to select wisely which one from your team you’re going to take into the fight, since each one of them carries not only different stats, but also different fighting skills. 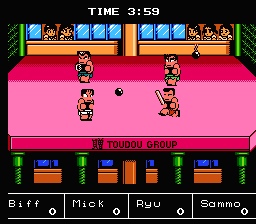 You’re basically going to go River City Ransom on each other.

If you’re playing this game with friends (up to four players can play it using the NES four-player adapter), the game will carry on with the four events and the winner will be player with the most points at the end of the Fighting Tournament. 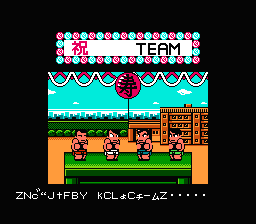 If you’ve played River City Ransom, you might recognize three out of these four characters (I’ll get back to this below).

But if you’re playing the game in single player, it’s important that your team holds the highest score after each event or it’ll be game over for you. If you manage to stay on top, you’ll get to see the ending of this game, and here’s where the rivalry between Kunio and Toudou (Crash and Todd, in the American version) started…

What was that…? Now I how anime characters feel…

Street Challenge consists in five main events, and you’ll be awarded with different medals depending on your performance in each one. The winning team will be the one that earns the most medals after the final event.

Here comes my first complaint about the localization…

They changed the captain of the second team—Riki (Ryan) from River City Ransom—in order to include Todd (who wasn’t a playable character), also…

The captains on the third team originally were Randy and Andy—the infamous Dragon Twins!—I have no idea why they were replaced.

The game is very brief and simple, and while it’s a bit fun, it might be somewhat frustrating for many since most of the events depend on some button mashing to win (and I still believe that button mashing was invented by Satan himself).

Here’s a rundown of the main events and some of the differences between them and their Japanese counterparts.

You need to have awesome multitasking abilities to beat this event. You don’t only have to rapidly tap your controller pad in order to gain your character’s top speed—you must also pay attention to the hurdles and the other player who is always throwing stuff at you.

The hurdles themselves can not only be jumped over or slid under, but also destroyed and used as weapons against your rivals.

The American version was set in a more urban environment.

These guys call it “Hammer Golf”, since they’re not only throwing a hammer…they’re also aiming to throw it inside a hole at the end of the field. The player who does it in the least shots wins.

You need both timing and button mashing to beat this event, so those who sold their soul to the devil of button mashing won’t have any problem with this one.

Slight scenery differences between the Japanese and American versions on this one.

This event is not about swimming. It’s more like a fighting game…underwater! The winner is the one who can drown the other player first. In order to do that, you have to deplete your opponent’s health bar, and depriving him from oxygen is the fastest way possible. I’m pretty sure kids knew this was something they shouldn’t try in a pool themselves.

The Statue of Liberty is the Mount Fuji of videogame localization.

This event is really fun once you get it. In this event you’ll be jumping over buildings, and to do that you have to use some timing to pole vault between them, or pick a unicycle if the next buildings are joined by a rope you can ride on.

It’s a fast-paced event that can go horribly wrong for you if you fail to pick or use the right item at the right time, but it’s ultimately one of the best events.

Not-so-subtle changes on the scenery.

There are huge differences on this one. The Japanese version is basically a Judo competition, complete with proper uniforms for each character while the fighting itself happens in some sort of monastery. Meanwhile, the American version was turned into some sort of street fighting going on a desolated alley, and characters sport the same attire as in the rest of the game.

Anyway, this event is one of the most fun of them all. While button mashing helps you a lot when you’re grappling with your opponent, the small assortment of fighting moves lets you reduce his stamina and make your grapples easier to win, and if you don’t use some strategy to win this, your rival will.

You can bet I prefer the Japanese version.

And there’s actually an ending after the main events!!!

If you were playing this game with your friends, the ending is all of them yelling at you and asking how the hell you managed to press the buttons that freaking fast!!! (I told you! The secret is in the arms, people! THE ARMS!)

But if you were playing in single player—unlike the localization of Nekketsu Koukou Dodgeball-bu Soccer-hen, AKA Nintendo World Cup—there is a proper ending if your team scored enough points to be first place after all the main events, although there are slight differences.

You see, in the original game, there’s a fifth unplayable team (Thorney High) that competes against you in all the main events; that’s a team Toudou and his dad brought from America. In this ending, you’ll get to see Toudou saying his farewells to them at the airport (while trying to play another prank at Kunio). Since the localized version is set in the U.S. as well, that means they’re just going back to their home city.

Riki (River City Ransom‘s Ryan) was swapped to this other team, and his name changed to “Crush”…classy.

Once these guys take their plane, Crash (Kunio, Alex, Thomas…whatever…!) shows up too late to wish them a nice trip, but just in time to learn what Todd was up to. Therefore, Crash and Todd’s rivalry continues just as a new challenger approaches.

Then the game teases you with this: 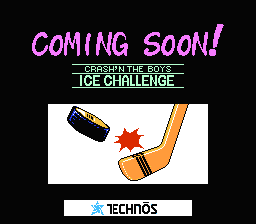 And we’ll be talking about this one next time!!!

And in another year, the it'll be ten years for More Dots.