I don’t know when “sci-fi adventure game with a sense of humor starring a janitor” became its own genre, but here I am reviewing The Silent Age. Originally for iOS, the updated Steam version of this semi-casual point-and-click puzzler boasts improved HD graphics, voice acting, more than 20 Achievements, and the ability to be played by a guy who still uses an old flip-phone that can only play the “why is my battery so low again?” game. As an experienced adventure gamer, a time travel aficionado with a soft spot for the 1970s, and a frequent victim of shoddy game design, I am pleased to report that The Silent Age is everything it should be, though perhaps not everything it could be. 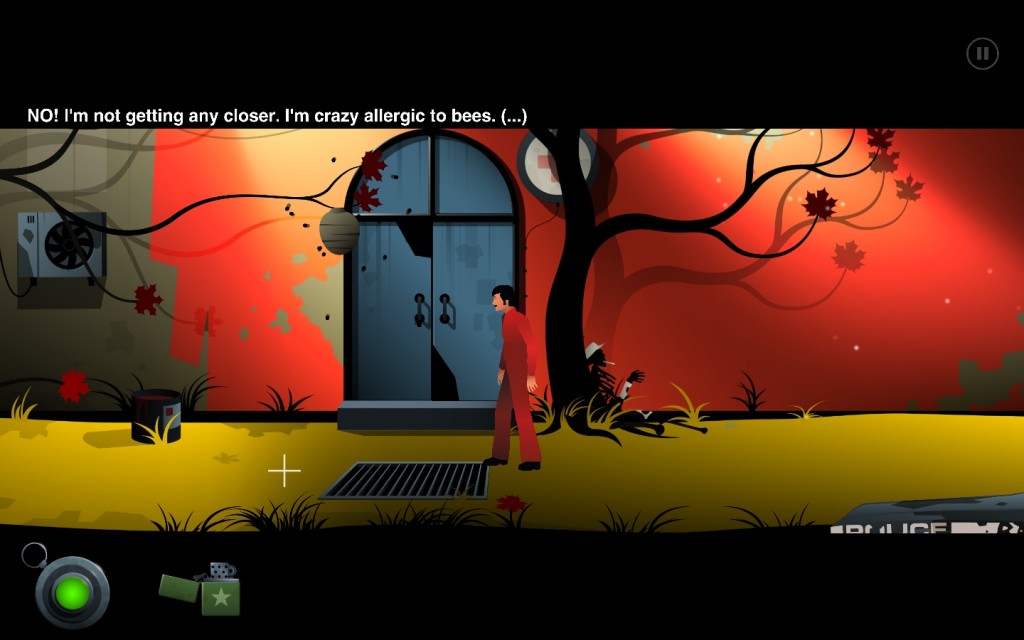 I said be, not bee, silly. I’ll bet you misheard me just so I could use this nifty screenshot.

The Silent Age takes place, in part, in 1972. All the dated pop culture references and rad lingo and orange wallpaper are a welcome break from the ubiquitous fantasy/futuristic/modern-day settings the genre embraces, let alone practically everything else that’s in my videogame library. The twist is that you play as an accidental time traveler who can instantaneously shift between the dawn of disco and some time in the future when humanity is extinct, possibly due to the advent of disco.

Whereas most post-apocalyptic settings are too gritty and depressing for my tastes, The Silent Age turns the downfall of humanity into a mystery to be solved and—hopefully—prevented, rather than a grim fact of life. The juxtaposition of the two time periods makes for some jarring, even chilling transitions, though. One moment you’re talking to a bartender in a vibrant nightclub; the next moment—whoosh—it’s silent and you’re standing next to his corpse in a pile of rubble. The game exudes a Metroid-level sense of creepy isolation, but with a novel vintage backdrop that makes the experience more fascinating than frightening, and with a sense of humor that helps cut the tension. The humor starts off subtle, and mostly manifests itself if you play adventure games like I do. I laughed out loud more than once, yet the humor never gets in the way of the serious moments (or vice versa)—a delicate balance that even my beloved No One Lives Forever couldn’t quite pull off, so kudos for that. 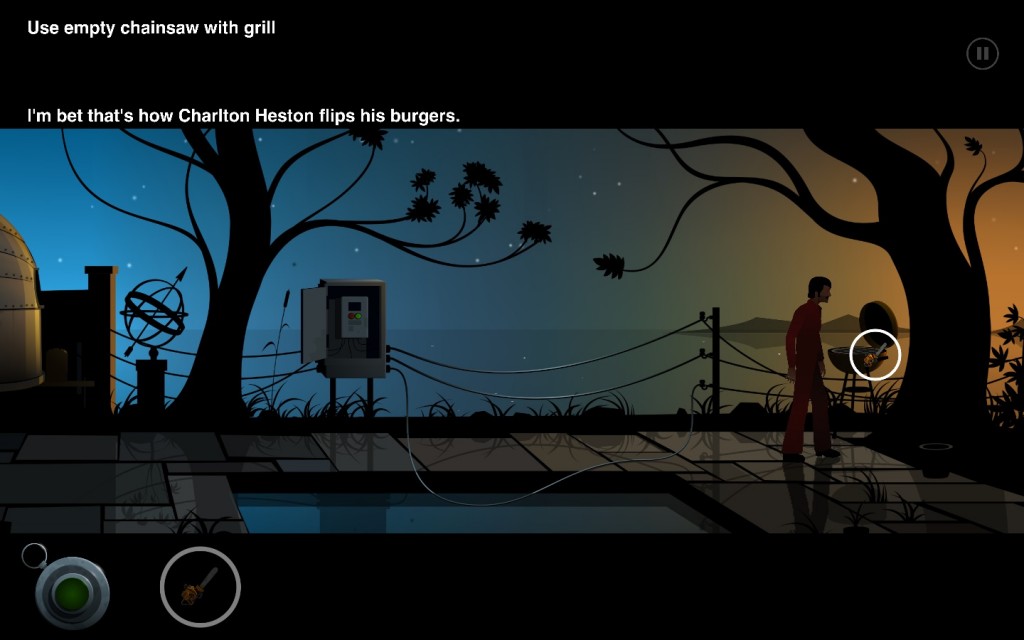 It’s too early to mention the typo in this screenshot, so pretend you didn’t see it.

The humor flows naturally from the hero’s rational interactions with a rational world that isn’t populated with talking purple tentacles, sombrero-shaped spaceships, and other obvious gags. Joe is a thoroughly normal person who works a blue-collar job, who is bewildered by someone from the future handing him a time-travel device and telling him to save the human race, and who feels uneasy around all the death and destruction he finds in the future. He feels the weight of the task before him and stresses out about it. He thinks your cockamamie “use apple on keypad” and “put burning stick in drawer for safekeeping” puzzle solutions are as crazy as you do. He’s an ordinary guy in an extraordinary situation, and that anchors the challenges in rationality and the story in compelling believability (at least, as much believability as a story about a time-traveling janitor from the ’70s can muster). 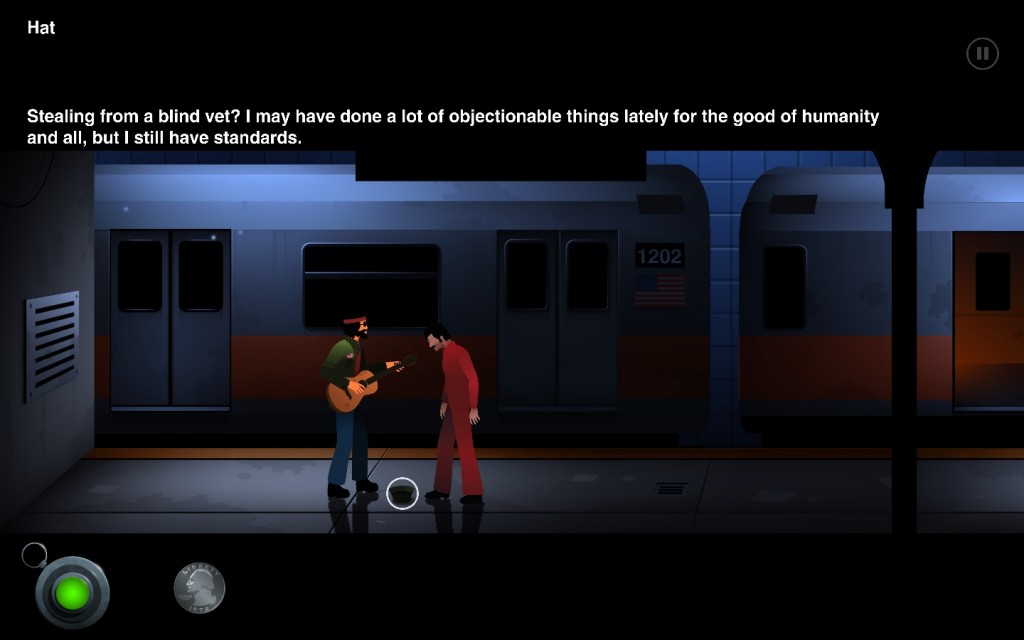 The learning curve is gradual and steady, inviting casual players to think more and more outside the box as the game progresses, all the while giving veteran players some satisfying mid/late-game challenges. Your limited inventory is always visible along the bottom of the screen, never growing large enough to become confusing. The cursor changes to show what’s interactable. When you click on something, Joe decides for himself how he’ll interact with it—no more wasted effort talking to inanimate objects and licking people to greet them. There’s not even a save/load feature to worry about; your progress is saved automatically. The game is broken into chapters, so you can start over at various points if you don’t want to pick up where you left off. The menu screen provides a convenient plot synopsis of each chapter you’ve unlocked, and you can skip cutscenes. You can even double-click to run instead of walk! If the game were any more player-friendly, it would give out hugs. 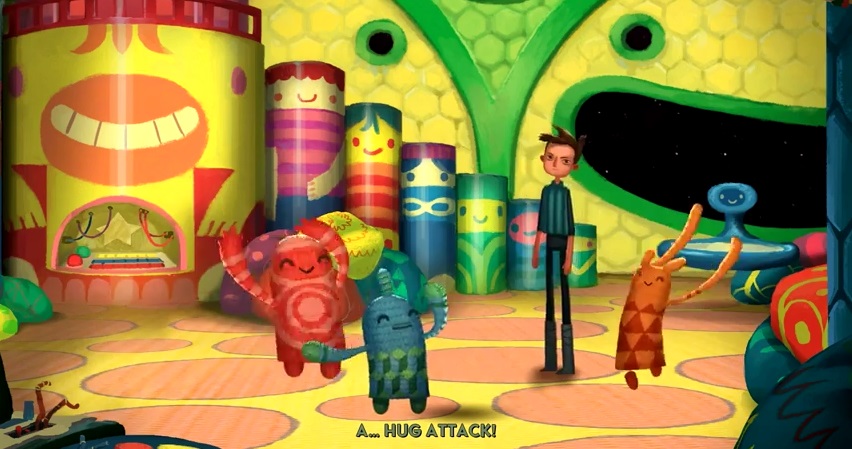 Unfortunately—and here is where we cut you off, you hug glutton—there’s an irritating and potentially confusing delay between clicking on something and getting feedback about it. If you’re a fast reader or an impatient clicker, you’ll probably need to pace yourself with The Silent Age—at best, rapid clicking will queue up a string of messages that look like they’re associated with different objects than the ones they came from; at worst, you’ll enter a new room and click on the first thing you see, Joe will spontaneously start to monologue about something unrelated, and then the belated response to your click will steamroll his deep thoughts. For as universally accessible as the rest of the interface is, it’s annoying that certain players have to consciously play the game differently to get the same experience as everyone else.

All this clicking happens in something of an audio vacuum, which you might’ve guessed from the game’s name. Certain puzzle solutions bring forth appropriately eerie wisps of music, but most of what you hear is incidental, if there’s anything to hear in the first place. It works, but I think the contrast of silence would be even stronger with a bit more music or ambient noise to play off it…or else the full voice acting I was expecting from the game’s description. Aside from a few grunts and exclamations from Joe, voiceovers only happen during the odd monologue and exchanges between characters. What voice acting there is, is very good; the casting and delivery are spot-on, and the voices add a meaningful sense of personality to the characters. Some of the voices sound right out of a ’70s sitcom. The editor in me noticed some spots where the dialogue text doesn’t precisely match up with the voice acting, as well as a few other textual boo-boos, but those can be easily addressed with an update (or ignored, if you can live with having a “bookshelf” and a “book shelf” in the same room). 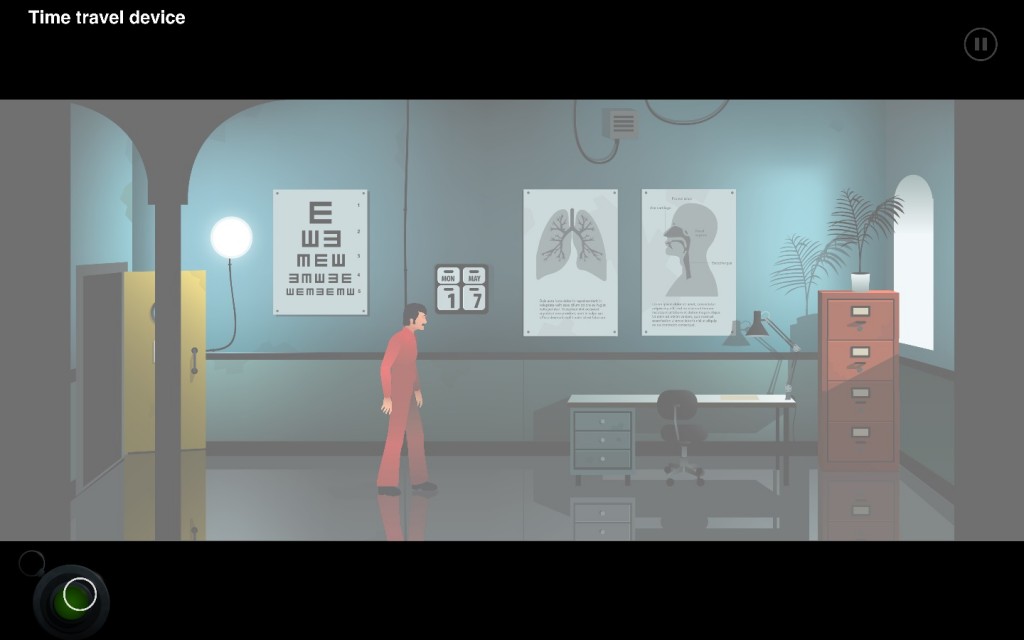 The time-travel noise is satisfying, though. Time travel goes “foomph”.

I dig the minimalist graphical style, which conveys enough detail to know what’s what, but not so much that it draws the focus away from the puzzles. The visuals, in tandem with Joe’s reactions to his surroundings, hint at how the apocalypse unfolded, and a handful of far-out plot twists either validate your suspicions or put the narrative on an unexpected new course. The game doesn’t need long cutscenes to tell a compelling story, but it piles on the verbose exposition anyhow. There’s one particular character whose main purpose is to advance the plot in the wordiest way possible, and come to think of it, he’s the one character whose voice grates on me, so that’s probably why. Longer exchanges tend to involve flashbacks that help break up the monotony of two people standing there generating words at each other, but still: Why rely on huge infodumps in a game that otherwise thrives on insinuation? 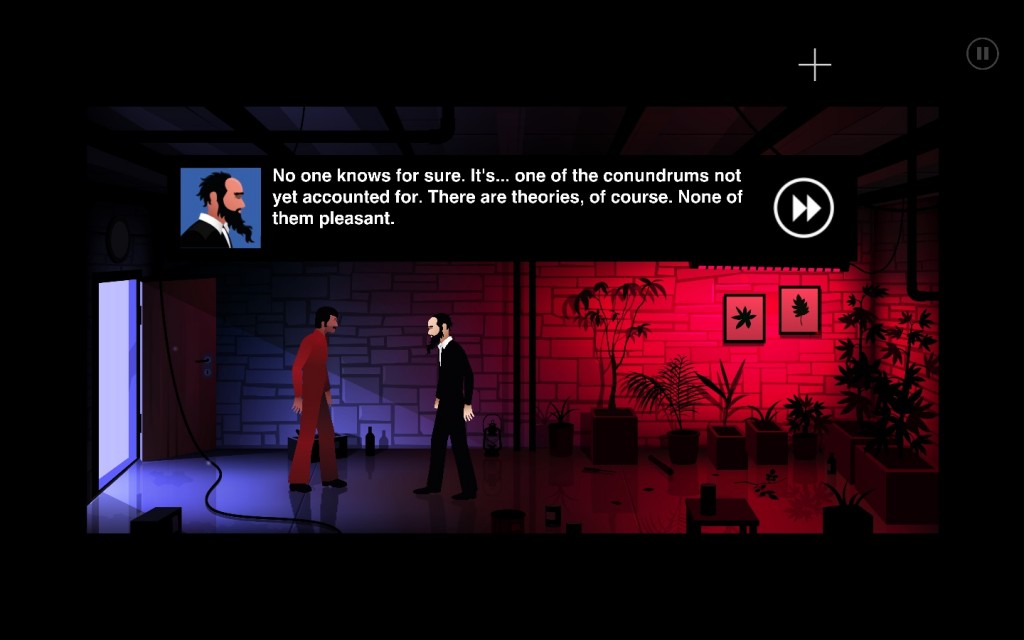 I recognize that The Silent Age is ostensibly a casual game, but I think there’s room for more complex and varied puzzles, especially ones that leverage the unique elements of each time period (bringing obsolete ’70s technology into play, for instance). There are some great time-travel puzzles that reveal a secret about the past or cause something to change in the future, but your handheld time machine is more often used as a door opener, getting you past obstacles that block the path to the next room in one time period but not the other. There are a few silly puzzles, too—for example, finding a tool to cut something that can be removed without cutting, then bringing that thing elsewhere so you can use the information on it as a reference, rather than just looking at the thing and remembering the information for the ten seconds its takes you to walk to the room where you need it. I’m also not sure why the game has such a fetish for making Joe unlock things and turn on the lights, as though his greatest challenges are from the beginning of his custodial shift. 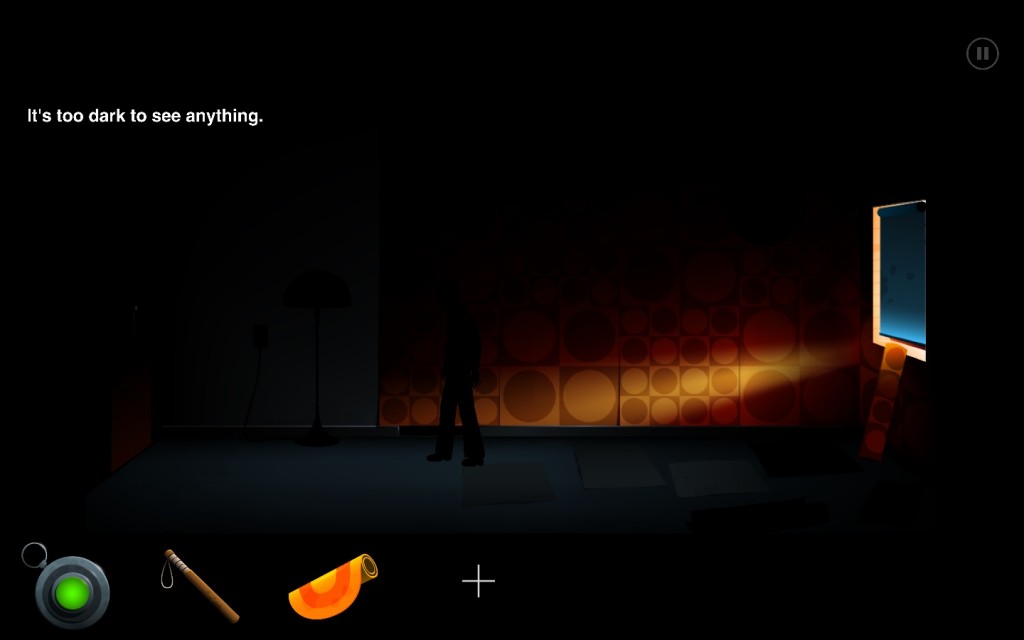 You are likely to be eaten by a grue. Wearing bell-bottoms.

I criticize, but I finished The Silent Age in a single (admittedly later than intended) evening because I was enjoying it so much. I relished the atmosphere, lost myself in the game world, and found myself invested in the protagonist and the plot. I appreciated the simplicity of the interface and the elegance of the challenge design. I laughed. A lot. The Silent Age reminded me of how relaxing and fun games can be when done right. Thoughtful planning and skillful execution are the Simon and Garfunkel of game design, and while you can normally only hope to find one or the other, The Silent Age brings them together for a reunion tour. The game has shortcomings, yes, but they’re not flaws. Any improvements would make a well-designed game even better.

The Silent Age is available on Steam for $9.99 (or less, if you’ve traveled to the future to buy it when the price has dropped). There’s not much in the way of replay value—most of the Achievements are unavoidable if you play to the end, and the rest are a quick pat on the back for being a mild lunatic—but it’s a memorable 3-5 hours, and it’s the kind of adventure game experience I wish I could have more often. 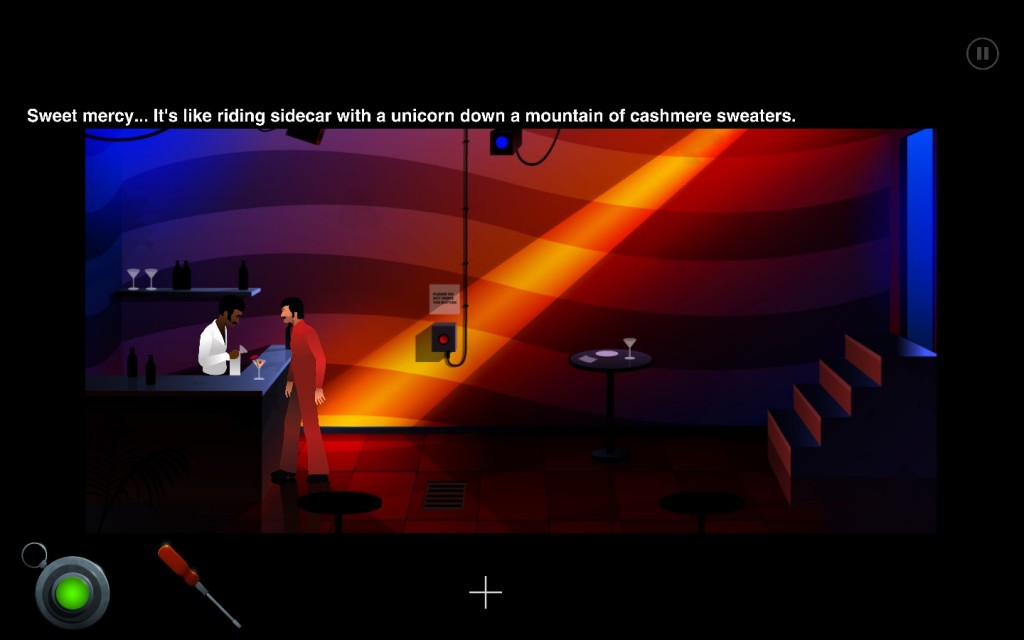 A review copy of this game was provided by the publisher.