This classic GameCola article was originally published in May, 2009.

Hey, kids! Do you like violence? Do you like curse words and blood baths? Do you like grabbing some punk by his shoulder, jamming his head into a traffic cone, skewering him with a street sign, and then repeatedly slamming him into a wall of spikes as blood spurts everywhere!?

Then this isn’t the game for you. This game is about keeping your room super tidy and doing all your homework right when you get home from school. Go find a different game to read about.

Are all the kids gone?

This game has all that stuff above and more. (Except the part about cleaning your room and doing your homework.) It’s totally awesome. There is a part in the game where you have to throw a bunch of guys on a spiked fountain and the fountain’s water turns red with blood. That’s what you get in MadWorld. 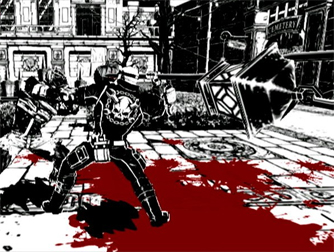 You play as Jack, a mercenary who has a frickin’ retractable CHAINSAW on his arm. You’re never told why—and honestly, it doesn’t even matter. There are so many ways to kill thugs and zombies in this game that you rarely use it. The whole game takes place inside a knock-off of Manhattan island, which has been sealed off and used as the setting for violent death games, a la the Schwarzenegger movie The Running Man. You’re trying to become the #1 killer in the city and win the game within the game by working your way through the other murderous freaks.

It’s even more fun than it sounds. With so many ways to destroy the peons in the different levels via new weapons and environmental hazards, you’re only limited by your perverse imagination. The fun is occasionally diminished by some camera and positioning issues, but these are only minor setbacks that seem the worst when you desperately need some fireworks to jam in some guy’s head.

The game is only augmented by the sound and graphics. The graphics are all black and white, except for the blood, which is red (and sometimes blue). They’re extremely well done, and they give the game the look and feel of a living Frank Miller comic book, but without looking goofy like that live-action Sin City movie. The visuals are arresting and even artsy in some locations, like a Japanese rock garden before you start picking up bonsai trees and breaking them over heads.

The soundtrack is A-list material, and since the setting is likened to a sporting event, you have two commentators: Greg Proops and John DiMaggio. Greg Proops you might recognize as a stand-up comedian who appears in nearly every episode of Whose Line Is It Anyway?, and John DiMaggio is the voice of Bender in Futurama. Nothing is more awesome than hearing Greg Proops say “fucktard” or Bender shouting “fucking awesome!” The soundtrack and commentators (although a bit repetitive) blend well with the best squishing, smashing, and spurting sound effects I have ever heard. The controls are mostly intuitive, although sometimes the quick time events happen too fast and you don’t have time to react to them. Really, they are just letting you know when the event happens, leaving it up to you to watch the boss for the next opportunity. There is enough waggle to keep the game fun but not so much that you’re in pain for the next week.

I'm reading the Legend of Zelda: Ocarina of Time manga for an upcoming edition of "Oh, the Humanity!". I complained about this the last time I read a manga, but it bears repeating—mangas are near