Nope—because unless you’ve been following my Twitter, you haven’t seen me gush about it yet. This is going to be more of a blog than a review, where I talk about what made me fall in love with this game all over again. 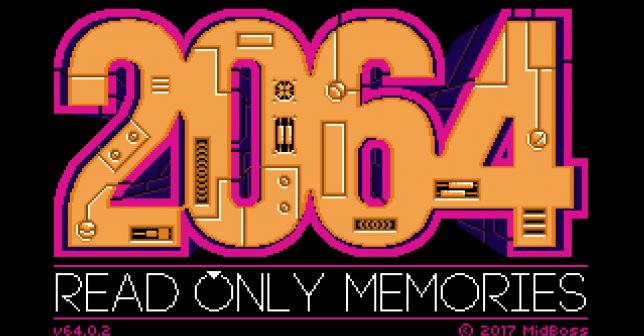 I bought this game over a year ago, and finished it in March of 2016. Several months passed, and I heard there would be an update including voice acting and improved story. I’ve given my opinion on Read Only Memories ad nauseum, so I’ll cut to the chase: 2064 is a huge upgrade to a game that was already awesome. The story was expanded, tweaked, and improved upon in many areas. The voice acting was amazing, and the additional dialogue, animations, and interactions were great. It was a lot of fun discovering what had been added during the update.

The voice cast is amazing. Going into 2064, I only knew two of the voice actors: Melissa Hutchison—the voice of Turing—and Nathan Sharp—voice of Chad (a.k.a. Starfucker). I haven’t looked too much into the previous roles of the rest of the actors, but after hearing their performances in this, I think I might. Every voice was awesome, especially those of the main cast. They breathed new life into the characters that I loved so much. Even the voices for background characters was good. Now that I’ve played through the game with voicing, I can’t imagine some of the lines having the same effect without it. Especially when Turing calls Chad “Starfucker” for the first time. It’s way too funny.

My favorite performances were from Chad and Oliver, voiced by Nathan Sharp and Erik Kimerer respectively.

[Hey-ho, there are spoilers ahead!] The points of the story they expanded were really great. There was a point in the original game where Jess, your literal cat lady friend, tells you why she’s a hybrid. I don’t remember how I triggered that conversation, but I know I didn’t get it my first playthrough of the game. In 2064, the conversation is not so optional. Jess tells you why she’s a hybrid, what she’s gone through since then, and why she’s a hybrids’ rights lawyer. Cancer left her needing to have her biology restarted from scratch using bug DNA. She qualified for a surgery that would make her look less terrifying by turning her into a cat. The surgery didn’t do much to help her now-strained relationship with her mom, and it made her so heavily modified that it was decided she couldn’t have children. Without her permission, she was made sterile. She took those who performed the surgery to court and won. This expansion of the story didn’t just give us a look into Jess’s backstory, it gives a look into what hybrids have to deal with.

Another part that was added was the backstory for Dekker, the combat android trying to kill you near the end of the game. When I heard it for the first time, my heart broke a little. Not enough to, you know, forgive him for murder, but enough to make me feel for him. He was a human at one point, and now all of that is gone. He’s just a brain in a bot now, and when Turing electrocutes the absolute shit out of him, he enjoys it. He is grateful to Turing for killing him. It’s just really sad. [End spoilers]

Remember how excited I was about interacting with all of the objects in Read Only Memories? WELL GUESS WHAT. THERE ARE MORE. I’m not talking more physical interactions; you’re still just using taste, touch, look, and use [inventory item] on. I mean more descriptions, and in some cases, more puns. I spent a good amount of my time trying to find every new interaction. It took a while, and I’m sure I missed a few things, but it was a blast for me. When I started up 2064, I was at about 36 hours. After my first playthrough I am now at 50 hours, making it my most-played Steam game. I’m excited to put in even more hours of my life—hours I could be using to do schoolwork—to find everything I’ve missed.

More tweaks I appreciated included some new backgrounds and character portraits, a new place to explore in the epilogue, new music, and new animations. They were all nice touches added to the game.

There is little for me to complain about when it comes to this game. It was a huge upgrade to an already awesome game. One thing that I will complain about is how little your name is used. I know it’s not possible to use the name you chose earlier with the voice acting, but the already sort of detached feeling the game had at points was made more apparent. I felt more like a passive observer, more so than I did in Read Only Memories. This might just be me, and it’s really just a small complaint I have, but it’s worth mentioning.

All in all, I loved it. 2064 made me want to go back through and find every change they made to this wonderful game. It’s so much fun and has such a wonderful story. I implore you to check it out on your own, or to check out the other content we have about the game on our website.

There are tons of possibilities with surround-sound enhanced games.