Welcome, one and all, BACK to Versus Mode—the column that calls upon GameCola writers as well as the videogame world at large to talk about what’s up in gaming.

Eric Regan is a current GameCola staff writer known for Captain Eric’s Psychic Thumb Feature Presentation, a column that previews upcoming games, and for Digital Championship Wrestling, a column that pits videogame character against videogame character in pro-wrestling matches. He’s also the artist behind the drawings in DCW and The Gates of Life, and he’s created most of our banner logos and backgrounds. This is Eric’s sixth appearance in Versus Mode, having written previously with Steve Hamner, Casey Levine, Steve Hamner again, Alex Jedraszczak, and Neal Iannone.

1. The upcoming Street Fighter movie will be nothing without Ken or Ryu.

Eric: It’s true. Why bother watching it? Street Fighter is all about Ken and Ryu. Hell, even with them, the last movie was horribly unbearable to watch, so how can the new one expect to succeed without them? Street Fighter without Ken or/and Ryu is like the Fourth of July without fireworks. A CRYING SHAME.

Who are you gonna focus your story around…Zangeif? The man barely speaks English. Dhalsim? The man isn’t even white! There goes your core audience right there. It’s foolish to have anyone else. In fact, they would be better off just making a series of movies starring ONLY Ken and Ryu called The Fantastic Tea Parties of Ken and Ryu. Now THAT would sell.

Eric: Well, unless you have an unusual love of fireballs, I don’t really see the problem of not having Ken and Ryu. I mean, there are like a billion other characters that do totally different things than them. Oh, and if that isn’t enough, there are also a billion other characters that are exactly like Ken and Ryu. It is time that some NEW blood be shown in the world of Street Fighterings!

Look, the movie is bound to fail anyway, so why not just go wild and crazy with it. At least in 10 years, when a couple of 50-year-old nerds start talking about the Street Fighter movies, instead of referring to the crappy one and that crappier one, they can say the really awful one and that one without Ken and Ryu!

2. Wii Fit should not tell people that they are fat.

Eric: I should be able to tell fatass kids that they are fat. So if I can do it, why shouldn’t their beloved videogame consoles be able to do the same thing?! Look, fatties need to be told how fat they are every second of the day, or their slow brains might forget it! And as we all know, being fat and not knowing it is the greatest crime…ever.

Eric: Wii Fit shouldn’t tell children they are fat because the children of today are fragile enough as it is! This needs to be handled in a very delicate manner. Fatties get enough of the pointing and laughing at school; they do not need their one true friend—their television—telling them the same thing. Furthermore, telling kids they are fat will most likely make them cry…and that is an entirely different game. Hand over that extra $49.99, kid—no free rides here!!

3. The coolness of a game’s name is key to its success.

Eric: I’d never be caught dead playing a game that did not have a cool name. I mean, what is more embarrassing than having someone ask you what game you’re playing, only for you to answer back with one of the lamest titles ever. That is just not cool. Games are all about how many other people have played the same game so you can feel a part of something, and have something to talk to others about, because, as we all know, when you love videogames, you lack many, MANY social skills.

Eric: A game can have the lamest name ever and still be quite successful. I mean, they have made like 1,000 Katamari games, and those have the lamest name possible. The true key to success is having a wonderful review in GAMECOLA. No game has ever had critical success without a stunning review in THE ‘Cola. Well, other than every single game that did have success with a bad review. Other than that, GameCola marks are the highest of high when it comes to finding out which games are the bees knees. Also, cute critters. Games can never have too many cute critters. If a game lacks cute critters, it will undoubtedly be a huge bust.

4. Konami had every right to ask reviewers to not mention install time or cutscene length in their reviews of MGS4.

Eric: Of course they had every right! It is their game. They should be able to control what information about it gets released—not some fancy impartial reviewers! Bad reviews mean less sales! I’m pretty sure that there are some laws against not letting companies make as many millions as they would like, so I really don’t see how anyone could disagree.

Plus, who wants to know things about games before playing them?! That’s ridiculous! It ruins all the fun. I mean, seriously, even if I had some psychic powers that let me see games in advance, there’s noooo way I’d even CONSIDER using them!

Eric: As fishy as most game reviews are today, I’m preeeetty sure that game companies should not be making requests like that. There is a point where their credibility has to be questioned, even if it is long after Joe’s Videogame Reviews presented by Taco Bell would like to give Taco Bell’s Groundmeat-tastic Adventure Shell a score of 100 tasty burritos out of 10.

If there are some features that the company doesn’t want mentioned before the game is released because they make the game look bad, I have a radical idea: How about you…don’t include them! If you know people don’t want to watch a full-length movie every other time they shoot a guy, maybe cut them down a bit, eh?

Eric: No. Achievements should be outlawed. They are a vile creation 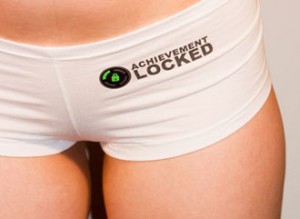 that only help the weak get weaker and the strong…get weaker. They serve no purpose at all, and yet fine upstanding citizens like our own PAUL FRANZEN get distracted by the shininess until they are playing MuffinMan EXTREEEEME Bake-off for 12 hours straight to unlock the secret 12.3 gamer points! ENOUGH. ENOUGH!

Eric: Yes. Because some games just aren’t good enough or just slip through the cracks! We need new, inventive reasons for people to buy new games and play them constantly. People don’t need jobs—people need to be defeating 200 enemies in the newest Dragonball Z classic! People need to know who out of their group of friends is the BEST gamer! Gaming is SO a skill, dammit! It’s not just entertainment. We need to know who is the best! ACHIEVEMENTS ARE THE ONLY WAY!