Another Hero game? Do I even have the time for all of these?

Although it is a Hero title, do not confuse this game with that awful monetary spinner, Guitar Hero: Van Halen, which contains the worst songs from Van Halen’s catalogue. OK, that was harsh, but I refuse to pay any money for GH:VH because it doesn’t even contain ANY of my favourite songs from Van Halen’s long-spanning career, all due to some moronic obsession with using one singer over another.

They even sound the same vocally, so not including “Dreams,” “Why Can’t This Be Love,” and “Right Now” is the kind of bullshit mistake that only Neversoft could make—majorly looking forward to Guitar Hero: James Blunt, by the way.

As for DJ Hero, there is a point that has to be made. Be sure before you buy. This game is going to do little less than revolutionize your method of playing rhythm-action video games. It is going to work miracles on you concerning what you think a game should contain. You are going to fall in love with this game. But when you put this game down, you’re not likely going to pick it back up again.

As Activision continues to produce cheap knock-offs of their own franchises, DJ Hero gets overlooked as another one of these Hero titles, when quite frankly, it’s a little different from the others. Michael Jackson once said, “I’m not like other guys.”, and much like him, DJ Hero will also be ridiculed until it dies, when it too, will suddenly be hailed as a masterpiece.

DJ Hero was developed by FreeStyle Games, who have been handling the downloadable content for the Neversoft Guitar Hero titles. Despite using that Guitar Hero 5 engine that they also threw into Band Hero, DJ Hero is not another cheap cash-in or re-skin. It is far more involved. 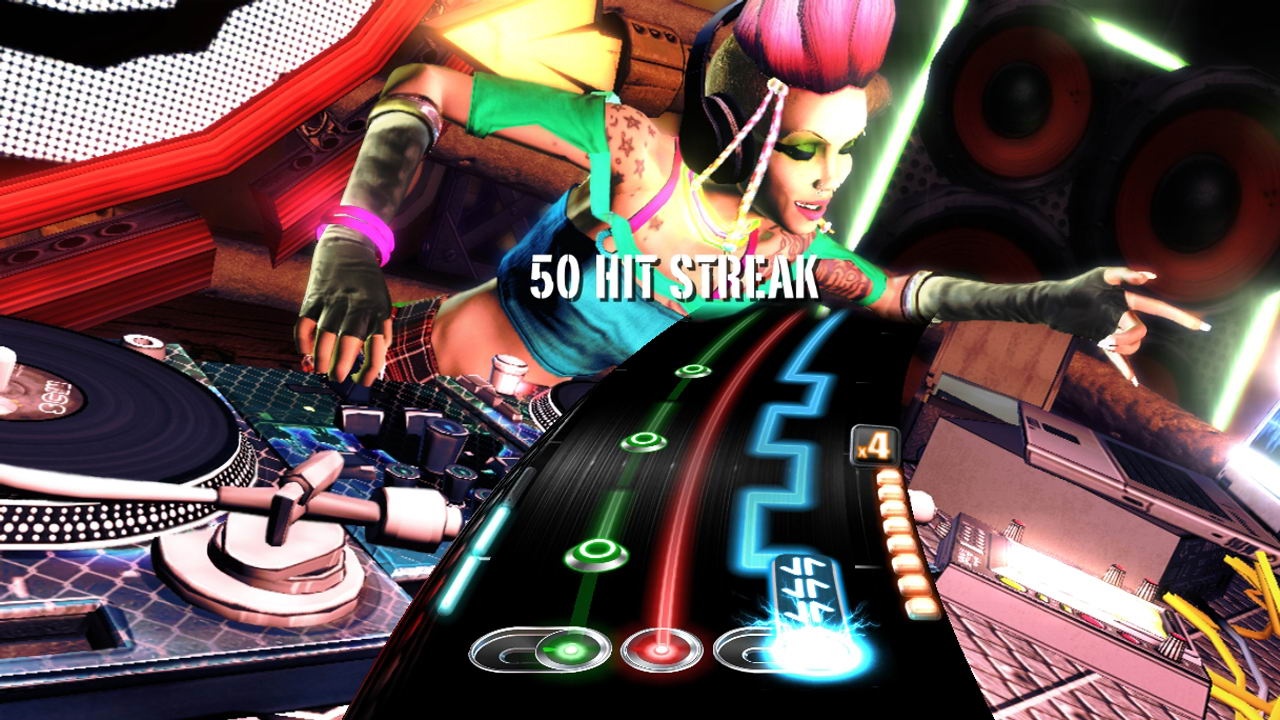 The game is played using one turntable controller (packaged with the game), which is sturdy and comfortable. It was up for nomination in the 2009 GameCola Videogame Awards, under Best Peripheral of 2009—losing to a cardboard box. In fact, a fucking Darth Vader sensor bar holder and the DOESN’T-DO-ANYTHING Wii MotionPlus attachment got more votes.

All good hardware has faults (I remember the Guitar Hero 3 wireless controller having an issue with the red button thanks to the detachable neck). I have noticed that with the turntable controller, the speed of the scratching can be a little off-putting, as can the vinyl deck being able to move 360 degrees. This is something you will get used to, though—or rather, you have to get used to.

It’s similar to Guitar Hero in that you have to press buttons, but these simulate particular vinyl controls, scratches, and your sample channel, so it requires conscious thought to play. I know that sounds like an obvious thing to say, but I’ve played so many Guitar Hero and Rock Band titles that I tend to just switch off and let my brain play. That isn’t possible with DJ Hero; thus, it is much more fun.

Also packed away on the marvelous mixing deck is a crossfader, which also seems rather off-putting at first. This is because it can move slightly in any given direction. If it clicked into place easier, it wouldn’t be so easy to lose your hit streak. It’s very important that you don’t mess any crossfades up if you’re going for those highly elusive five-star ratings.

Once you move up to harder difficulties, scratches and crossfading are commonplace. They shouldn’t pose a real threat to anyone who has played a decent rhythm-action title before, but keep your wits about you nevertheless.

The crossfader spikes will pose a threat to everyone, though, and higher intensity mixes rely on using these to increase difficulty, which is rather unfair and subsequently makes me very upset.

Speaking of mistakes, when you really screw up your chance for some Euphoria (yet another relation to Mr. Star Power), but you’ve managed to earn a Rewind, you can physically pull the record back a phrase or two to have another shot at whatever part took you by surprise.

Also, you can use a Rewind in another, much more crafty way—to complete a high scoring section twice for a higher combo and technically triple the points if you hit it correctly both times!

DJ Hero also tackles the concept of a freakishly huge setlist by combining songs into mashups, and besides these, there are a few remixes of singular tracks, as well as two epic Daft Punk Megamixes.

The majority of the mixes are absolutely brilliant, ranging from the more believable “Dizzie Rascal vs. DJ Shadow” to the more outrageous “Vanilla Ice vs. Paula Abdul.”

I would also like to mention the absolutely mind-blowing remix that throws Tiesto and Benny Benassi together for maximum epic points. It sounds like a robot funeral—sad, sorrowful chords with a robot voice blabbering.

The mixes are, for the most part, well-charted—and on Expert difficulty, it feels like you are mixing 1:1 (in other words, like you’re there with some real turntables, personally bringing the noise). 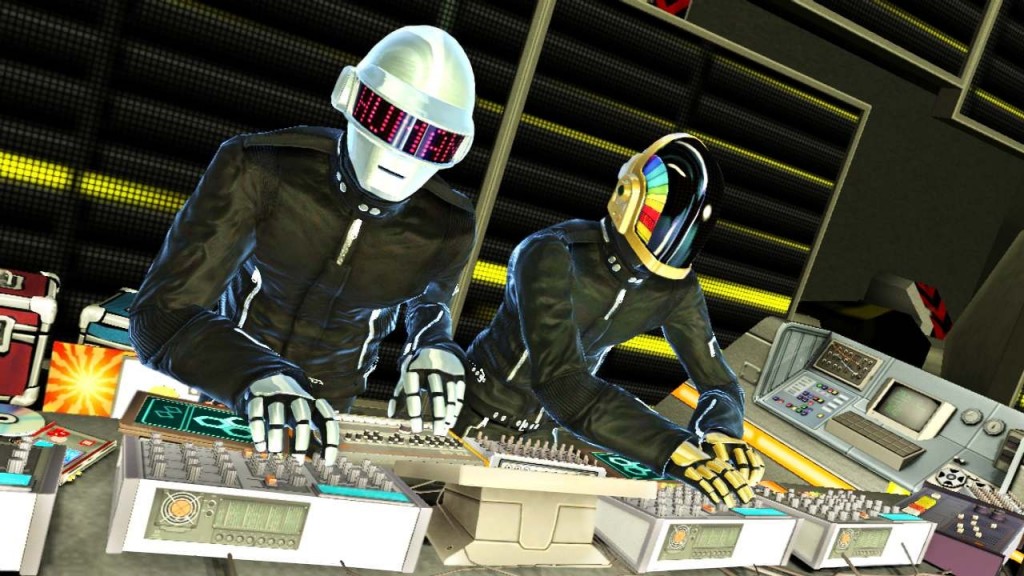 However, being a Hero title, DJ Hero suffers from the same hereditary diseases its forefathers did. Apart from Daft Punk, every character has some kind of notable visual deformation. Movements and stage motions are quite sickening as you glimpse them from the corner of your eye. The sweat dripping from the ceiling of the first venue is absolutely ugly, too. As for the crowd, they are the traditional paper crowd, with added pixelation for good measure, it seems.

So the game isn’t that nice to look at, not that you should be paying attention, because you’re too busy focusing on the highway.

Despite the longevity of the title poised by the number of mixes, I had completed every song with five stars over the space of a weekend. After which, I lost the drive to carry on, despite five-starring several songs on Expert.

If you’ve a longer attention span than I, then you’ll probably find DJ Hero to be an almost-groundbreaking title in the rhythm-action genre. Sadly, given its price and how it soon loses its charm, DJ Hero is to be ignored if you’re suffering in this economic crisis going on these days (which incidentally, I now am).

To put it bluntly—it was a hundred pounds, delivered to my door, on release day. I had all songs beaten on Medium over one weekend. I haven’t played it for over three months. If you’re a serious gamer, you’ll find the challenges rewardingly difficult, but if you’re a casual gamer like me, you might find yourself trading this sucker in.

And don’t, however tempting it looks, pick up Guitar Hero: Van Halen with your in-store credit.

Paul: It's Digital Championship Wrestling, live from something that is definitely not the DCW Arena! Hello everyone I'm Paul Franzen, alongside Eric "Sniffles" Regan, and tonight's contest could becom