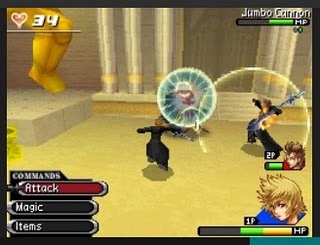 Anyway, Kingdom Hearts 358/2 Days is, chronologically, the second game in the series—at least at first! It takes place after the PSP’s excellent Birth By Sleep, and before the GBA’s Chain of Memories—at least at first! The events of 358/2 Days occur before, during, and after that first handheld excursion (later remade for PS2 as Re: Chain of Memories), leading directly into the start of Kingdom Hearts II. Confused yet? I’ve barely even scratched the surface!

You are Roxas, adorable blond child and the face that launched a thousand slightly dodgy pieces of fan art in which he engages in illicit acts with Naruto, or something. As a part of the MYSTERIOUS ORGANISATION XIII (which inexplicably has fourteen members), Roxas has to ponce around in a black hoodie covered in superfluous zippers and smack things with his giant key, which is also a sword I guess. He does this in a third-person hack-‘n-slash style, with the worst camera controls ever conceived. The first thing you must do when you stick this bitch up in your DS is to get your ass in that menu and switch camera control to Type B. This is very important! L & R to manoeuvre the camera is just better than using the touchscreen. Nine out of ten people who are not psychotic child murderers agree. Actually, if I’m honest, psychotic child murderers agree too, but they kill children, so we can’t really be seen to support their views.

Other than this glaring issue, the game controls nicely, though the “jump” and “hurt stuff” buttons have been inexplicable swapped from the way they are in EVERY OTHER KINGDOM HEARTS GAME. Sure, the DS doesn’t have a Circle button, but they could have mapped jumping to the A button, just for the sake of consistency. Thankfully you’ll get used to this in about five seconds.

OK I’M GOING TO TALK ABOUT THE ACTUAL GAME NOW.

Poor Roxas’ missions are a bit samey, which is actually a plot point. Indeed this game does some astonishing things with its storytelling; more on that later. But still, the first few hours of this game will annoy. Almost every mission is “Kill Heartless” (Heartless being this game’s Goombas, or Badniks, or Locust or whatever), with the rare variety being brief and unsatisfying—the “investigation” missions are the most thankless, ridiculously dull nonsense I’ve encountered on the DS. Thank goodness there are only a handful of them. Oh, and the stealth missions! Jesus.

Three hours in and you’ll be ready to give the cartridge a pair of cement shoes and throw it to the bottom of the ocean, where the fishes will then stick it in their fish DSs and play for three hours, then craft another, bigger pair of cement shoes and send the cartridge to the centre of the earth somehow. The lava golems in the earth’s core, however, do not possess the necessary finesse to craft shoes, and aren’t all that interested in videogames anyway. But wait! Don’t give up! Struggle on, readers! The game gets better. 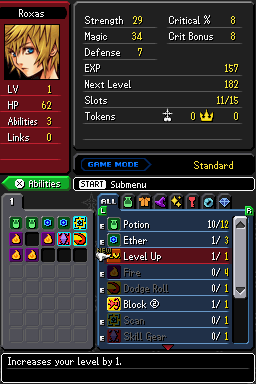 You see, there’s this Panel System.  It’s how equipping and leveling up is handled in 358/2 Days, and the game’s main gimmick. Beating missions will grant the player (that’s you!) “panels”, which range from single-block magic efforts and single-use items, such as Blizzara, Ether, et al, all the way to multi-block Tetris-like shapes, which house extra single panels to boost their effects. For example, suppose you find a 4-panel “High Jump”. You can stick High Jumper Level +1 panels inside it to power it up. DOESN’T THIS SOUND BRILLIANT!?

All right, it sounds crap. I admit it. But it’s good, honest! There’s no effective way to communicate how rewarding the Panel System is, collecting Slot Releasers to give yourself more space on the board, rearranging your load-out to incorporate that awkwardly-shaped Level Tripler you’ve acquired, saving multiple “decks” to utilise on varying missions…it’s fantastically well-conceived, addictive, and thoroughly customisable.

Because of this, the game transcends the initial wall of “HOW MANY TIMES DO I HAVE TO DO THE SAME THING”, and you realise it becomes about doing the same thing in increasingly different and complex ways. Do you focus on bolstering your magic, or level up your Keyblade to be an unstoppable combo machine, tanking your way through giant Heartless like they were a packet of chocolate digestive biscuits? It’s up to you.

Let’s talk about the repetition a little more, though, because it needs to be addressed. You see, 358/2 Days is repetitive by design, presenting Roxas’ career as thankless toil, with his only joy in life being the regular post-mission ice-cream with dear friend and fellow MYSTERIOUS ORGANISATION XIII, Axel. This is hammered into the player so much you’ll become completely numb to three-minute cutscenes in which nothing happens besides ice-cream being eaten, with the same music for every scene. I kid you not, this happens at least a hundred times. But, the repetition pays off: the (much) later breaking of the norm hits you in a way that not many games manage, and only works because of the sheer plot fatigue the writing has instilled in you up to that point. It’s genuinely brilliant, and extremely rewarding for fans of the series, as well as those who pay attention. 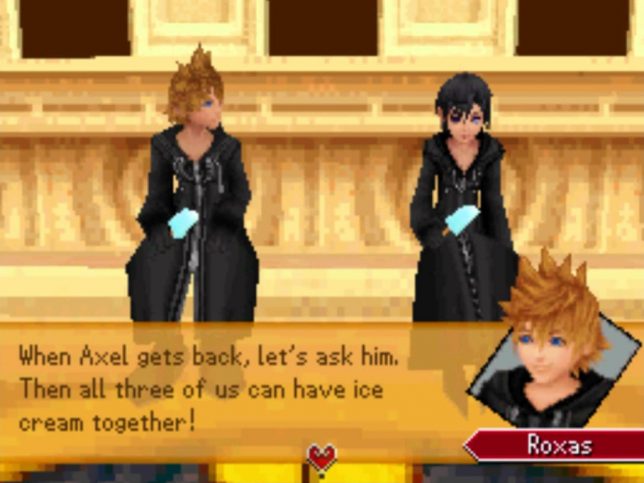 The music is good, but there don’t seem to be that many tracks, which is a sorry side effect of the game only having a handful of different worlds, all of which are repeated from previous Kingdom Hearts titles. Sound effects are generally fine, but if you were to play a drinking game in which you take a shot every time you hear a canned “laughter” sound cue, you’d be dead within seven missions.

Visually, we’re in DS 3D territory, so it naturally doesn’t look superb. It’s certainly not bad, though, with some good-looking bosses and environments, though some of the locations (Olympus Coliseum in particular) look bland and sparse. Still, you most likely won’t care, since you’ll be too busy collecting hearts, or emblems, or mission crowns.

Yep, lots to do in this one. Story missions, challenge missions and multiplayer holo-missions, which allow you to go out with like-minded Kingdom Hearts fans and complete the story missions with buddies in tow. You can customise the rules to make the game harder or easier, and playing these multiplayer games unlocks content for the single player game—though you can access this on your own, too, if you have no friends. Which, as a Kingdom Hearts fan, you probably don’t.

With a story mode clocking in at just under thirty hours, and plenty of post-game content, Kingdom Hearts 358/2 Days is an immersive and excellent game, a treat for fans and a great little action RPG in its own right. Even if you don’t like shotacon.