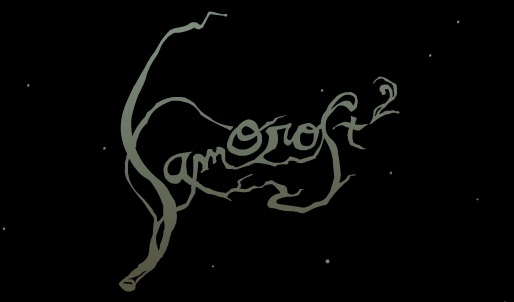 Knowing the inclinations of the rest of the GameCola staff, I’m putting myself in extreme danger by saying what I’m about to say. But the time has come to confess a terrible secret:

It’s been a long, long time since I last played an adventure game— 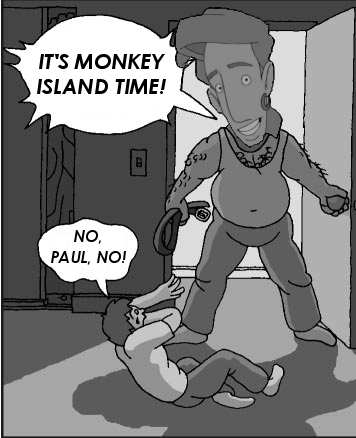 Ahem, if you’ll let me finish: it’s been a long time since I last played an adventure game, BUT all the constant blather about adventure games around here inspired me to do something about it. Well, so long as it didn’t involve a lot of effort on my part, anyway.

And it takes very little effort to buy adventure games on accident: I picked up the Humble Indie Bundle earlier this year, one of those special “Pay What You Want” sales where you are tricked into paying more than you really want through a combination of shame and the promise to donate a portion of the money to blind starving orphans who are pregnant with additional orphans. Among such notable indie titles as Gish and Aquaria was a quirky little adventure game called Samorost 2. I’d left it lurking in the depths of my hard drive ever since, afraid to reopen the Pandora’s Box of adventure game goodness, knowing that it would inevitably lead me once again through the first three Monkey Islands and into the waiting jaws of Escape from Monkey Island. But I guess that’s a risk that all adventure fans have to take.

The story of Samorost 2 is a simple one, starring a little fellow named…I just realized I have no idea what his name is. I’ve been calling him “Samorost,” but the game doesn’t ever actually state this: there is no text or dialogue besides the occasional “HNNNNNNGGGRRRKKK” from the wildlife or the weird semi-comprehensible mutterings from the hero when you try to click on something the game doesn’t want you to click on yet. This was a bit of a downer at first, since I personally tend to think of the adventure genre as the one type of game in which the dialogue is something I look forward to rather than something which makes me want to take an electric drill to my eardrums. 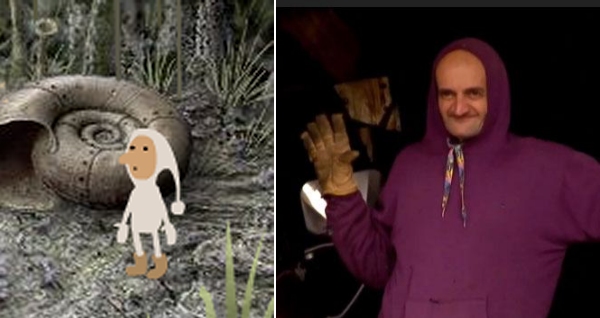 One of these guys is just a palette-swap of the other.

That’s not to say that the minimalist approach in Samorost 2 is a bad thing; heck, it might even be a blessing, considering that the writing in the last Eastern European game I played was centered around the use of domestic abuse as comic relief. What Samorost 2 lacks in riveting storytelling, it makes up for with a combination of surreal visuals and a nice electronic/jazz/new age/klezmer/I-am-bad-at-identifying-musical-genres soundtrack. You’ll guide the little hooded hero through a strange world which combines whimsical characters and grungy environments into something that I can only describe as Jim Henson’s Fallout 3. 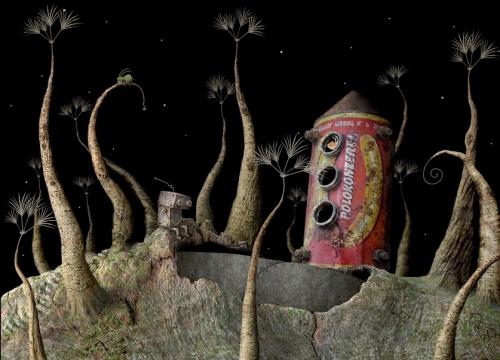 The visuals and soundtrack are really the main draw, since Samorost 2 isn’t exactly heavy fare as far as adventure games go. Inventory? Lists of actions? Branching dialogue choices? Nope. The game mostly progresses in a “room by room” manner without any free wandering. Each “room”  is its own self-contained puzzle, and unlike other games in the genre, you won’t be performing advanced techniques like duct-taping a filing cabinet to the severed head of a giraffe in order to produce a new puzzle-solving implement. Instead, it usually comes down to figuring out what is clickable, what happens when you click it, and then what order you need to click all the clickables in.

It’s not always obvious what you need to do or what exactly you’re doing until you’ve finished doing it, and there are a few areas where the wacky art works against the game: all the organic grittiness starts to blend together, and it’s hard to tell whether something is a significant object or just part of the background. I wasted a great deal of time on one particular screen before I accidentally clicked on the mountain in the background and realized “Oh. I can go up there.” The easily frustrated will be pleased to know that this doesn’t happen too often…mainly because the game is beatable in a single short sitting. 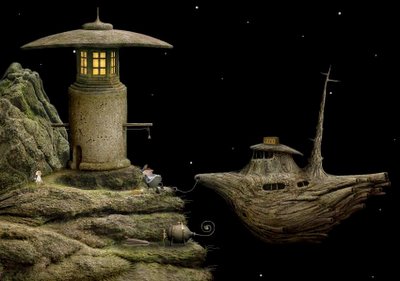 While Samorost 2 isn’t overflowing with content, it only costs $5 and comes with the soundtrack in MP3 format, making it a decent value. Adventure veterans will blow right through the game, so they might prefer to think of the $5 as going to the soundtrack with the game itself serving as “album art,” or they might want to skip to Amanita’s later and more substantial title Machinarium. But for anyone who has a little time to kill, Amanita has opted for classic drug dealing marketing theory by offering the original Samorost and the first part of Samorost 2 for free. And if you make it that far, they’ve pretty much already got your money.

Michael gives ten reasons why he likes and dislikes Pajama Sam 3: You Are What You Eat From Your Head to Your Feet.