Early Game Boy titles have a reputation for being cheap knockoffs and easy ports of popular console games. Even if they don’t, that assertion segues nicely into my sentiment that Mega Man: Dr. Wily’s Revenge is a cheap knockoff and an easy port of the NES Mega Man titles. Offering a mashup of enemies, obstacles, and music from Mega Man and Mega Man 2, Dr. Wily’s Revenge is a clever ROM hack in the guise of a legitimate spinoff, but there are enough differences from the NES games to make it worth buying a blowtorch to destroy this miserable cartridge.

I mean, uh, to make it worth buying a copy. To destroy with a blowtorch. 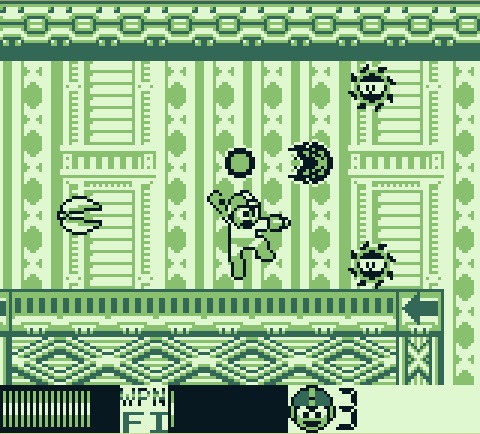 Dr. Wily’s Revenge is best enjoyed in the same way most people enjoy professional boxing—at a distance, watching someone else get the ever-loving doodle beaten out of them. The Mega Man games are renowned for their difficulty, but Dr. Wily’s Revenge crosses the line from challenging to punishing, thanks to the ruinous trifecta of skewed rewards, excessively close-quarters fighting, and having marginally better maneuverability than a burly lumberjack with Chinese takeout boxes for limbs. Does that even make sense? I’m so upset with this game that I’m making involuntary references to Chinese food. 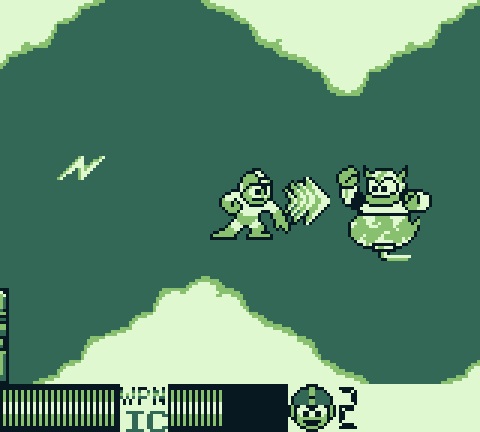 To fit Mega Man’s adventures on a Game Boy screen without shrinking everything to an unidentifiably tiny Super Mario Land size, Capcom simply kept their hero the same height as he was in the NES games, and made all the rooms smaller instead. Mega Man: Broom Closet Showdown wouldn’t be so bad if the words “Mega Man PC game” didn’t immediately come to mind after the first few minutes of gameplay, followed by a string of profanities regarding Mega Man’s inability to run, jump, or shoot quickly enough to avoid turning every enemy encounter into that steamroller scene from Austin Powers. 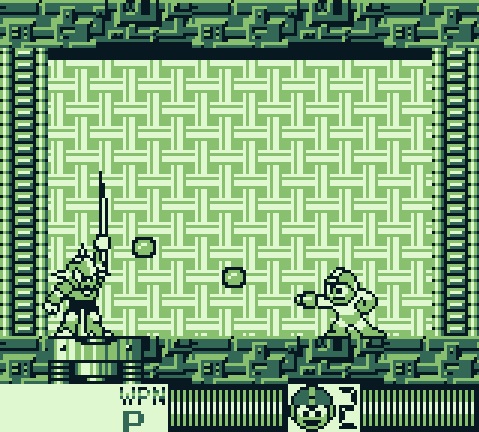 This is Enker, the tough-to-dodge “Mega Man Killer.”
As though Wily’s other robots were programmed to bake cakes.

Two good ways for a game to make up for below-average maneuverability and tight spaces are to (a) grant the hero access to a wide array of superior weapons, and (b) provide plenty of apology powerups. To its credit, Dr. Wily’s Revenge delivers on both counts. Woefully, it delivers to the wrong address, on the wrong day, with rabid badgers strapped loosely to the box. 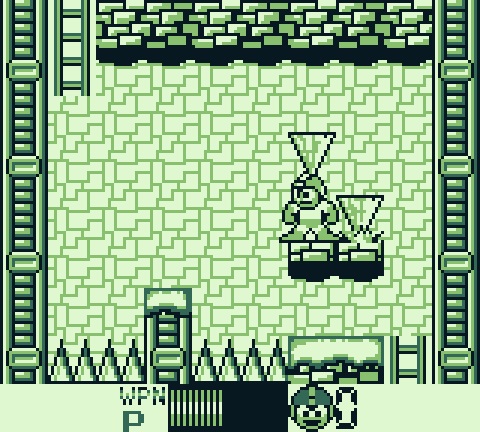 Playing the game feels like this a lot of the time.

The game offers ten special weapons, five of which are dropped into your lap immediately before the very last stage. That’s the RPG equivalent of meeting Gogo, Umaro, Mog, Strago, and Relm right before the final dungeon of Final Fantasy VI. Or, if you’re not an RPG fan, it’s the platformer equivalent of getting Mirror Buster, Atomic Fire, Time Stopper, Bubble Lead, and Quick Boomerang right before the final stage of Dr. Wily’s Revenge. There’s maybe a total of 90 seconds where there’s any reason to use your new weapons over the ones you already had. It’s wasteful! If this were a Chinese buffet, Capcom would be charged extra for wast—oh, I’m doing it again. 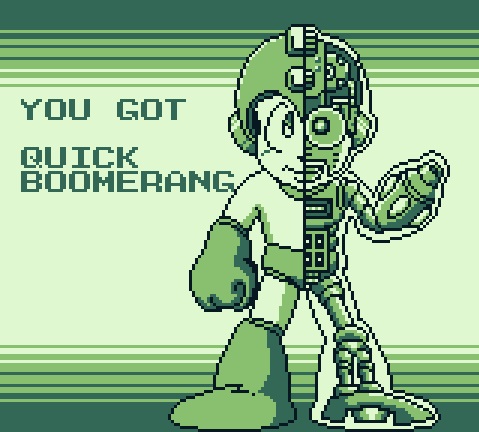 YOU GOT   NO PLACE TO USE IT

At least the game encourages special weapon use. Enemies are plentiful, and defeated enemies drop powerups, including weapon refills, weapon refills, weapon refills, weapon refills, and—when the moon is in the Seventh House and Jupiter aligns with Mars—large weapon refills. Whether due to Capcom’s generosity or your physical inability to collect any other kind of powerup, you will never live long enough to see your weapon energy totally depleted. The only guaranteed 1-Ups are in places where you’ll Game Over at least once before figuring out how to get them, and the only guaranteed health refills come just before the part where you get brutally assaulted by everything that moves. Which is every part, really. Most games reward a player’s ability to survive by giving powerups that promote further survival; Dr. Wily’s Revenge completely misses the point of rewards in general and just assumes it’s doing the right thing by giving you anything at all. Thanks, weird Uncle Dr. Wily’s Revenge. I really needed $70,000 of Hello Kitty merchandise instead of that hip replacement. 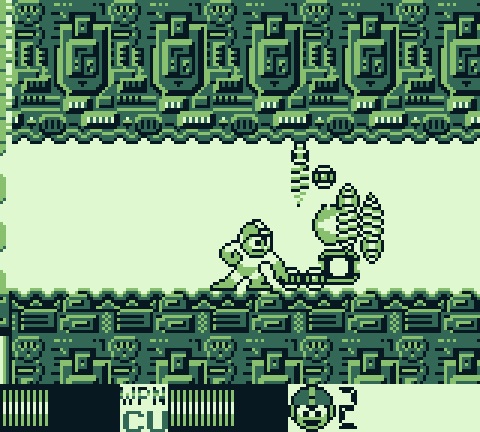 I sincerely wish it was a fluke to get this many weapon capsules at once.

If you ignore everything that ruins the game, Dr. Wily’s Revenge isn’t half bad. The mildly remixed music does justice to the originals, and the new tunes are nice; the graphics are clean, albeit a little bland; light puzzle elements add a layer of interest to the otherwise straightforward stages; and it’s mercifully short. The flip side of that last point is that, because the bosses from MM2 are all clustered together and don’t have stages of their own, the player is denied the chance to tackle reimagined challenges of dodging speedy laser beams with lightning-fast reflexes and actually that’s a good thing now that I’m thinking about it. The game is mercifully short. 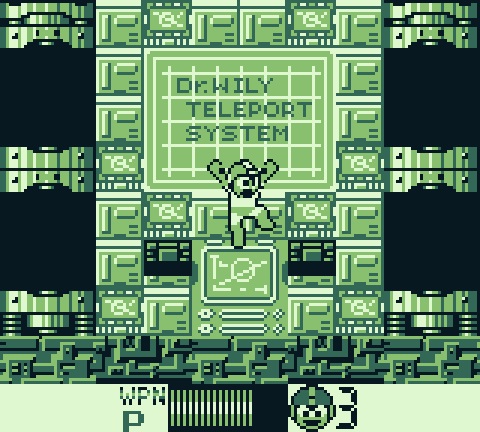 Pity none of these teleports you into a better game.

Unbalanced rewards, a small playing field, and a sluggish hero make simply playing the game a chore, let along beating it. The game is worth beating (and not just with a sledgehammer), but I may only be saying that because I’m a hopeless Mega Man fan with a Backloggery to look after, and not because any of the decent aspects of the game are strong enough to shine through the frustrations and make the game any fun. Unless you’re cheating, clairvoyant, exceptionally talented, or have no standards, the game will almost certainly have long overstayed its welcome by the time you see the ending credits. 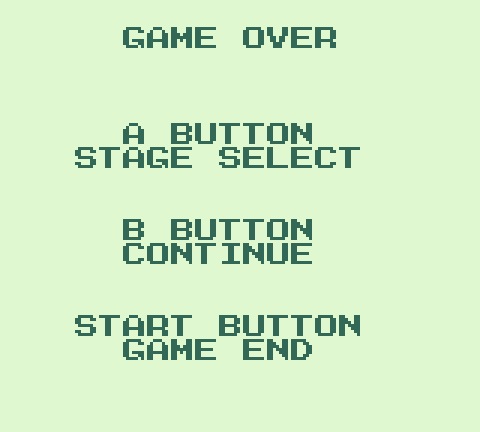 I’m pretty sure these are the ending credits.

We're also leaving out the excerpt for this article, as that would ruin the experience of reading the article.