Last time on “Spam Attack,” I wrote a few paragraphs spotlighting eight of the funniest spam comments GameCola had ever received. Because that format worked so well, this installment of “Spam Attack” will be virtually identical except for eight new comments, different music, slightly better graphics, a weapon called Super Arrow, and a few minor tweaks, like turning your dog into a springboard. (I assume I’m making a Mega Man 5 reference here, but you may wish to check on Floofy just the same.) 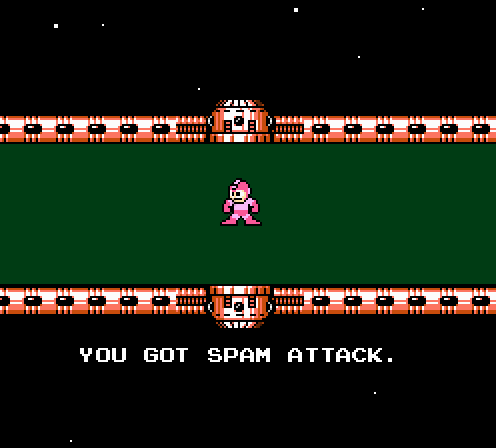 On the subject of Mega Man, I received this comment from a convolutedly named reader on my review of the Mega Man PC game: “Attractive section of content. I just stumbled upon your web site and in accession capital to assert that I get actually loved account your weblog posts. Any way I will be subscribing to your augment or even I fulfillment you get right of entry to constantly fast.” Fulfillment? Right of entry? Constantly fast? And you think I have an attractive section of content? Why, you know all the right things to say to a lady, who should play christian in fifty shades of grey. You can subscribe to my augment any time.

GameCola itself received some very kind words from an unlikely source via my review of Mega Man 10: “Incredible! This blog looks just like my old one! It’s on a entirely different subject but it has pretty much the same page layout and design. Outstanding choice of colors!” says columbine school shooting. There is absolutely nothing tasteful I can say to complete this paragraph.

Of course, it’s not all rainbows and puppycats when people voice their opinions about this site. I can clearly hear some sarcasm oozing from reader cercueil, who read the review of Bionic Commando Rearmed by Mark Freedman and replied, “nice post Derrick…” While I’d normally conjecture that cercueil was simply commenting on the wrong person’s post (on the wrong website, no less, unless we’ve recently hired a heartburn-suffering Captain Derrick to write about his Super Tums), previous experience with spam comments leads me to believe the commenter was trying to spell “instant payday loans” instead of “Derrick.”

Case in point: This philosophical and encouraging comment on my “Flash Flood: Epic Mario” column: “A fascinating discussion is worth comment. I do believe that you ought to write more about this subject matter, it may not be a taboo matter but typically people do not discuss such topics. To the next! Cheers!! instant payday loans” Clearly, Derrick was trying to sign the comment with his own name.

The next one comes from an early draft of GameCola’s Most Essential/Influential Games (A-D): “I built a boatload of maps for DOOM, then DOOM II, and then for Skulltag. I built my entire game proposal for College using DOOM by using mods to. Rebate all the game screenshots,” says Matt Jonas. Wait, that’s not a spam comment at all! This is why we edit before we post.

OK, this one from celine outlet on Michael Gray‘s Radiant Historia review is real spam, and also the kind of gratitude we could all stand to hear more often: “Thank you for sharking.”

Speaking of Meteo Xavier, this fascinating gem from Fitrie was presented in response to his review of Resident Evil 2: “Looking at the poster yeah, it does ineded sound about as action-packed as 2001: A Space Odyssey. um, no, I’m fairly sure even an exotic-metabolismed alien will recognise what water is. Either it’s a crucial part of her metabolism, or it’s a horrid corrosive poison that’s present on most bodies she might land on.Is Lithan wearing more eye-shadow than Belle Star? Sure looks like it in the uncontrollable sexual attraction screengrab.” Wow, that’s provocative. Now I want to re-read this post, because I definitely do not remember there being a movie poster anywhere in it.

Our final comment this time around is not so much a comment as it is lovingly crafted fanfiction submitted for Christian Porter‘s “Top of the Heap: Atari’s Naughty Side” column:

The creature watched as she screamed and tried to run away. It was fun before but now he was annoyed. He wrapped his mangy tail around the girl’s mouth. He glared and her and violently shook her. He brought her up until she was in front of his face and yelled, “Shut up you insignificant little brat!”

He was mad and hungry. He wanted to eat now. Moving the girl’s neck slightly he took a big chunk out of her neck. He growled in appreciation. He continued eating until the child was no more. From the hair on her head to the toes on her feet, every morsel was eaten.

He licked his claws clean. His hunger was satisfied. For now he was to return back to his nest and rest.

Someone hire this person right now.