No, no. Mega Man II. You’re thinking of Mega Man 2. The one for the NES. The one that everybody likes. The one with excessive sprite flicker, and places where it’s a nightmare to grind for power-ups if you run out of energy for the one weapon you need to win, and…oh, I’m only mentioning the flaws, huh. Well, if that’s the game you’re thinking of, then maybe Mega Man II isn’t so bad after all. 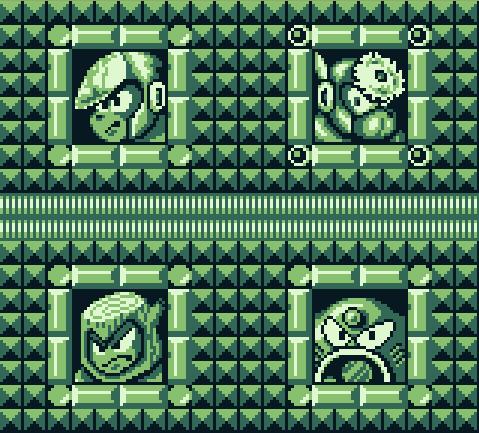 I mean, it doesn’t look that bad…

If you missed my review of the game’s predecessor, Dr. Wily’s Revenge, the basic idea behind the Mega Man Game Boy games is to take two of the NES installments and smash ’em together like LEGO sculptures, building something new out of the pieces that go flying across the room. Mega Man II scoops up pieces of MM2 and MM3 off the floor—along with dirt, dog hair, a pogo stick, and a digitized screaming baby—and fashions them into one of the fugliest games in Mega Man history.

At least, that’s what anyone who’s only played the game once or twice might tell you. Anyone who spent a few years with only Mega Man II to satisfy his craving for Mega Man on the go might tell you that beauty is in the eye of the beholder—fans may condemn the game for its glaring exterior flaws, but underneath all that, there’s a mediocre game just begging for the mild indifference it deserves. 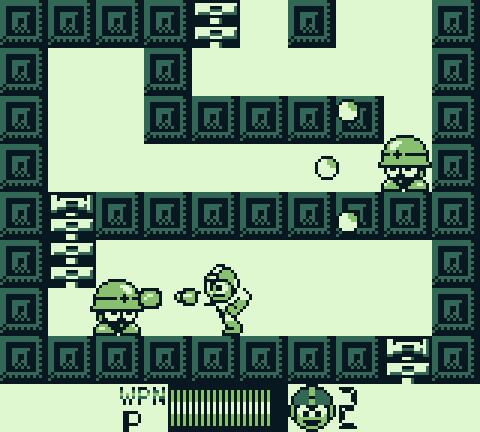 “Meh” is the proper reaction to this screen.
“Meh”ga Man fights some “Meh”talls with his “Meh”ga Buster in “Meh”tal Man’s stage.

I don’t mind Mega Man II. Yes, it’s quite possibly the easiest game in the entire Mega Man series (even giving MM10‘s “we refuse to let you lose” mode a run for its money), the soundtrack is marred by extraordinarily high-pitched chirps and cheeps that make playing the game with headphones a safety hazard, and the final boss looks like he fell back on Mega Man II after failing his audition for Super Mario Land. 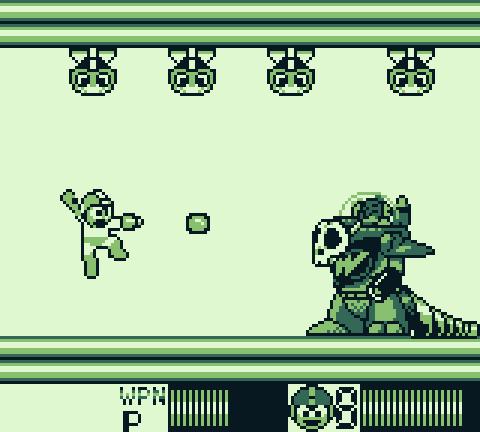 None of that really matters to me—most games feel easy once you become good at them, the sound can be turned off if you don’t like it, and the fact that we can take Heat Man halfway seriously when he’s just a dude in a Zippo lighter costume has set the bar extraordinarily low for acceptable villains in a Mega Man game. (Don’t get me wrong; I like Heat Man. He just makes me giggle.) Bottom line? MMII is another excuse to play a Mega Man game, plain and simple. You can ignore or downplay the shortcomings just as easily as you can the successes.

On the plus side, Mega Man is now able to slide out of harm’s way (or into harm’s way, if you’re terrible), which significantly mitigates the inherent difficulty of navigating an NES-sized Mega Man through Game Boy-sized stages. He can now carry up to four life-replenishing Energy Tanks, making it possible for collision-prone gamers to survive long enough to figure out whether it’s a worse idea to go to Wood Man or Clash Man first. (Yes, Clash man. Japanese plonunciation finally caught up with us.) Also taking into consideration that the frequency of useful power-ups has gone up like my blood sugar level after an evening with my good friends Ben and Jerry, Mega Man II officially fixes every major issue that ruins my enjoyment of Dr. Wily’s Revenge…and fixes it so hard you’ll spontaneously sprout a pacifier and diaper after a few minutes of playing. 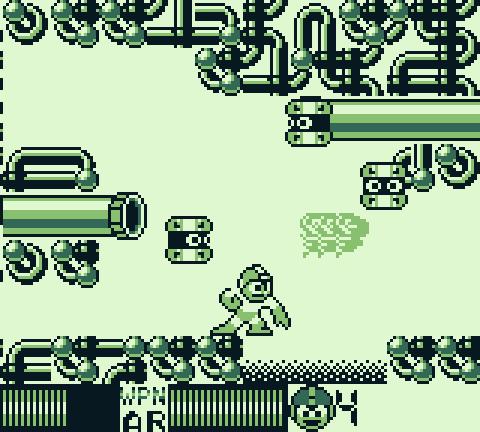 Oh, I remember this screen now. It’s the one place where I ever died.

If Dr. Wily’s Revenge can only be conquered with excessive practice or shamefully resorting to savestates, then Mega Man II can only be conquered if you have thumbs. (Or the nearest equivalent; tentacles, I guess.) The game is geared toward all audiences instead of the race of superhumans who normally play Mega Man, and I suspect that’s completely by accident.

There are plenty of enemies, but they approach you at speeds reserved for waddling back to the couch after Thanksgiving dinner. Damage output and weapon energy consumption have been rebalanced for fairness and consistency to remove any need for strategy. Mega Man can now summon Rush, his Swiss Army Dog, to play the game for him by bypassing every single challenge that requires any amount of platforming skill. Seriously. It’s still technically possible to fail, but I don’t think the game developers were planning for that contingency. 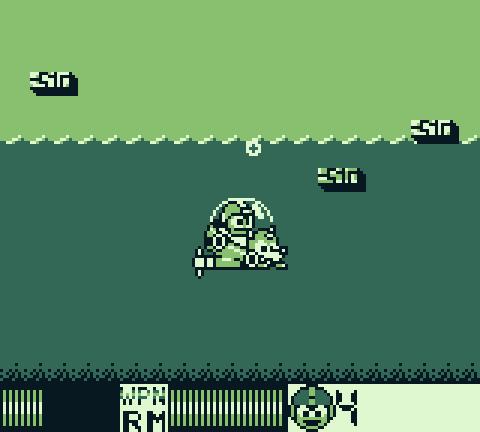 I wouldn’t say these are flaws, necessarily, it’s just that Mega Man II seems to have more in common with Kirby’s Dream Land than any other Mega Man game when it comes to defining what a fun challenge is. Kirby hands you a lollipop and tells you to run with wild abandon through your enemies; Mega Man kicks you in the jaw and tells you it’s a lollipop. Both are perfectly valid ways to design a videogame.

Mega Man II doesn’t stand out because it never asks too much of the player, and that equates to many longtime fans of the series as being a failure. These are the same fans who will bellyache about the completely new soundtrack that replaces the beloved tunes from MM2 and MM3, which could have so easily been ported to the Game Boy. No, the music’s not as memorable. Yes, there are some sharp notes that might poke your ear out. The game’s just different, a little flawed, and rampantly ho-hum. This is a series that set the bar very high early on—Mega Man II might be disappointing as a Mega Man game, but it’s not, in itself, a bad game. 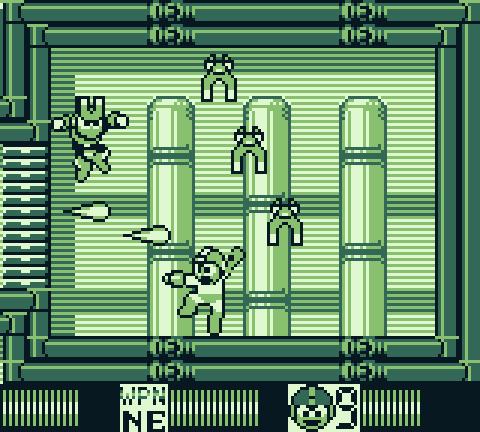 These magnets are harmful, so don’t put this screenshot too close to your monitor.

There are fun little touches, like Rush Marine bouncing off the wall when you hit a dead end. Also, there’s…uh…OK, so there are fun little touch. Singular. But it’s interesting to tackle some stages adapted from Mega Man 3 with special weapons that actually do something from Mega Man 2. And it’s fun to hop around on a pogo stick acquired from the penultimate boss, despite the fact that the only level where you can use it is not at all designed to be pogo stick-accessible. OSHA would have a fit. 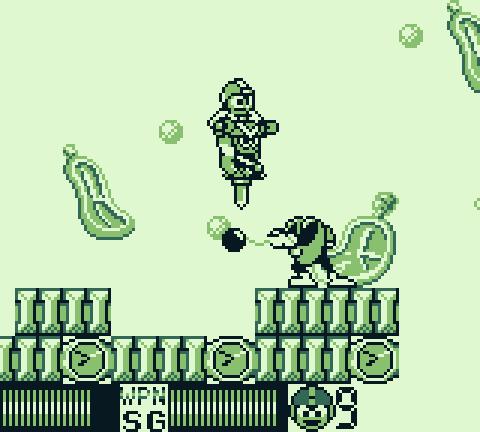 Now, why does Quint, the penultimate boss, have a pogo stick? Because the sinister Dr. Wily built a time machine, and returned to the present with—I swear, this is exactly like Bill & Ted’s Excellent Adventure—eight old robot masters who couldn’t kill Mega Man the first time around. I realize that doesn’t answer my question, but then again, neither does the instruction manual for this game.

Apparently, Quint is Mega Man’s future self, from whichever future sequel it is where Mega Man is a drunken pogo stick bum in a lazy Quick Man costume. If your greatest ambition with a time machine is to recruit an army of historically ineffective soldiers, plus an aging version of your nemesis who was pathetic enough to be captured and brainwashed in the first place, just to kill this one robot whose creation you could easily go back in time to prevent, then I guess it’s really more like Bill & Ted’s Bogus Journey, huh. 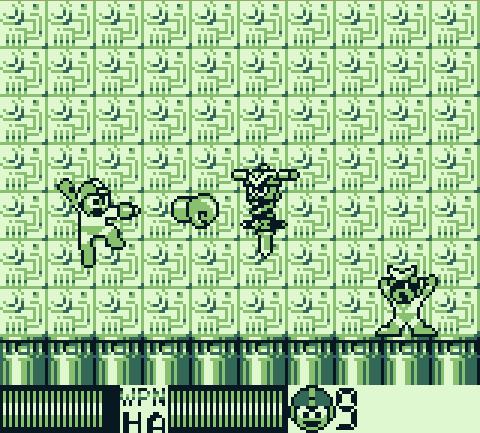 I may be the first person in history to make this battle look remotely cool. Go me.

If you don’t mind a goofy/not-actually-presented-within-the-game story (and really, you’re playing a Mega Man game; of course you don’t mind), then there’s not much that might ruin your enjoyment of the game, other than the music and the gameplay. Mega Man II ultimately isn’t as polished or professional as Dr. Wily’s Revenge, but the challenges (if you can call them challenges) won’t have you hurling your Game Boy (or worse yet, your GameCube with Game Boy Player attachment) at random passersby in excessive frustration. That counts for a lot in my book, especially when you’re looking for a portable, casual Mega Man fix that doesn’t involve injuring people with gaming consoles.