As you can probably tell from pretty much every article I’ve ever written, I’m a big fan of Mega Man. For almost as long as I’ve been playing these games, I’ve dreamed of creating my own. In elementary school, I drew level maps and doodled boss ideas all the time. In high school, I flirted with ROM hacking software for all of 20 minutes before realizing that I had neither the skill nor the patience to revamp Mega Man 3 to my liking. After college, I looked into the possibility of creating a game from scratch with Game Maker, but I could never find the time or motivation to embark on what would undoubtedly be my most ambitious and challenging side project yet. It seemed like I might never get to fulfill my dream of creating (or even participating in creating) a Mega Man game.

Not long after the initial release of the Mega Man Legacy Collection, Capcom held a contest on their official blog that went unnoticed by almost everyone. The directive was to design a Challenge level using stage segments from Mega Man 1-6, and ten lucky winners would have their designs featured in the 3DS release of the Legacy Collection. I’ve already written about the contest and results in more detail on my personal blog, but the long and short of it is that I submitted the best design I could muster, was contacted by Capcom, and saw my name in the credits of the game a few months later. That’s right: I designed a level in an official Mega Man game (“Fortress Fun House”, if you’re wondering). My dream was finally realized. 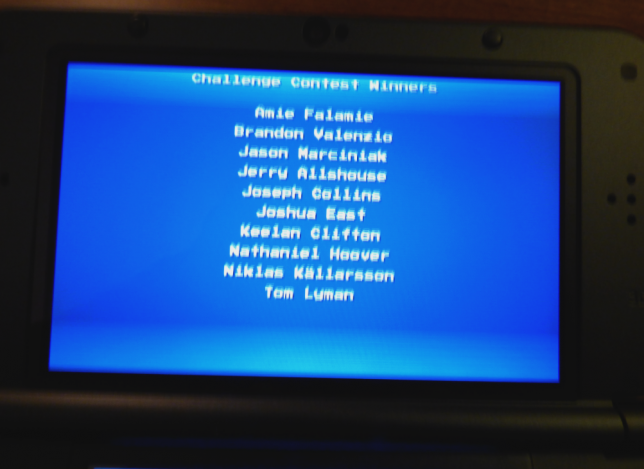 Except…it wasn’t, exactly. It would be more accurate to say that I won a level design contest, and there’s a Challenge level in the Legacy Collection that’s inspired by my design. At first, I was disappointed and a little disgruntled to see how substantially my design was changed, but my attitude toward the situation and the Challenge stages in general has mellowed considerably since learning more about the development of the game. Despite my preliminary misgivings, I’ve come to greatly appreciate the Legacy Collection as a whole, and I’m proud to have been a small part of it. Plus, that gold Mega Man amiibo that comes with the deluxe version of the game (and that we poked fun at before) looks pretty darn fine as a trophy on the shelf when Capcom sent it to you as a bonus reward.

Still, I had yet to design a level that was truly my own for a Mega Man game.

Around the same time as the Legacy Collection was being released for the 3DS, I got wind of a fan contest that could help me fully realize my dream. The premise of the contest was simple: Make a good Mega Man level. A user-friendly devkit was provided, preloaded with enough assets that no real programming was necessary (but people with the know-how were encouraged to create their own assets). I spent a few weeks building “Maze of Death”, an outrageously elaborate game within a game, a whole fortress unto itself. Was this the kind of level I’d design for a normal Mega Man game? No, sir. But I saw this as possibly the only opportunity I’d ever have to make my dream a reality, so I wanted to pack in as much creativity as possible. 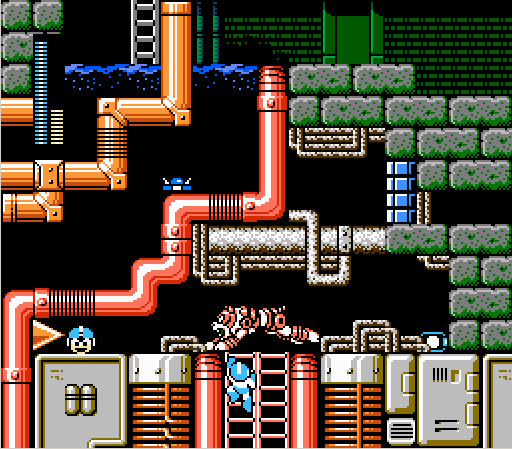 Pictured: Too much creativity.

What’s neat about the contest is that every single entry, regardless of quality, was included in the subsequent Make a Good Mega Man Level Contest fangame (or MaGMML, for short). The levels are grouped into tiers according to how well they scored in the contest, and each tier is accessible from a hub world with a shop and plenty of fun characters to talk to. It’s a unique game, and one of my favorite Mega Man fangames yet, even if you take my contributions out of the equation. And I can say “contributions”, plural—I had the honor of announcing the results via livestream, did some extensive bug reporting, redesigned the game logo for the title screen, informally copyedited most of the game text, wrote/rewrote the tutorial popups and the dialogue for two or three characters, and instigated a handful of other miscellaneous changes. I’m proud and grateful to have been so involved in this game. 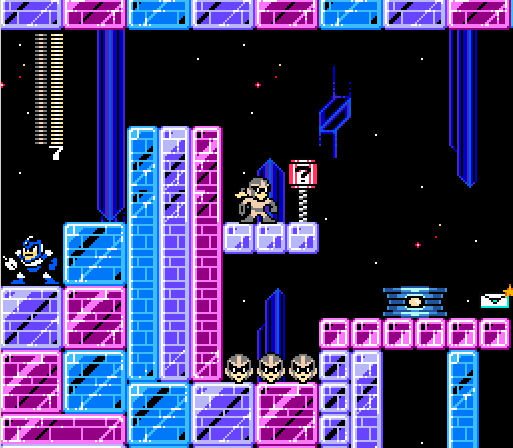 I suggested filling the empty space next to my level’s teleporter with a single extra life. This should tell you something about my level.

Being credited in two different Mega Man games in the same year would have been more than enough for me, but then another fan contest opened up. This one was for Mega Man Endless, an upcoming fangame modeled around the Endless Attack modes of Mega Man 9 and 10. For this, contestants submitted as many stages as they wanted, but they had to be six screens in length and use only the enemies and obstacles included in the devkit. Aesthetics were mostly irrelevant, as the finished game would have its own music and a different set of graphics than were provided in the devkit, so the focus was entirely on the gameplay.

Unlike MaGMML, Endless was selective about what levels would be included in the final game, with the understanding that some designs might be tweaked to improve overall game balance. I’m pleased to report that at least two of my five gleefully cruel (but mostly fair) submissions made the cut. Amusingly, one of my fellow Legacy Collection contest winners (Joseph Collins, of “Wily’s Machines” fame) also participated in the contest, so we’ll get to be in the credits of a Mega Man game together once again. I’ve already been informed of a few changes to my levels, but surprisingly, I’m totally on board with them, and they’re ones I may never have thought of on my own. 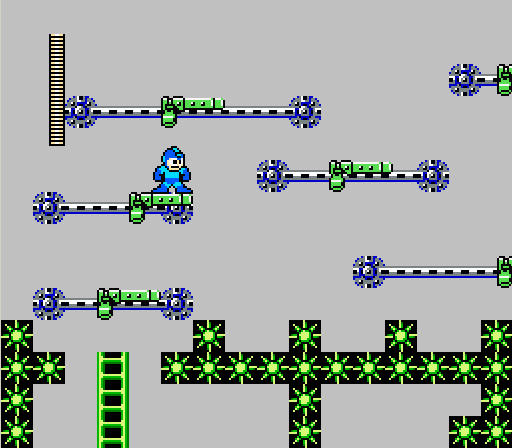 A sample of one of my submissions. This is the easy part.

It’s interesting to me that each of these three games has interpreted my creative vision differently. MaGMML kept my vision completely intact, the Legacy Collection used my vision as a guideline, and though I have yet to see Endless in action, I trust that it will preserve the spirit of my vision while fine-tuning the details to benefit the game as a whole. As someone who wants total control over some things and no control whatsoever over other things, it’s been an eye-opening experience to discover the cons of the extremes and the pros of a middle ground.

You’d think three Mega Man games this year would be enough for me to cross this dream off my list and move on to the next one (landing a Star Trek cameo), but I’ve been bitten by the level design bug. I’ve worked enough with these devkits to know that I am capable of creating a modest fangame of my own, and that’s exactly what I’m working on now. I’m keeping it largely under wraps until I’m convinced it’ll actually see the light of day, but I’m excited about how it’s going so far. I’m also excited, for the first time in a long time, about working with other people to make it happen. I’ve had a lot of good experiences with creative collaboration, but I’ve also had enough disappointments and frustrations that I’ve been reluctant to collaborate with anybody beyond that. The frequent contact I’ve had with the MaGMML and Endless contest organizers over the last few months has gone a long way in renewing my faith in joint creative projects.

I’ve moved past this “gotta do it all myself” mentality; I’m asking for help and for permission to use other people’s work when it’s clear that I don’t have the patience or ability to do something myself. It’ll still be a game I can call my own—I’m doing all the level design, writing the story, drawing the concept art for the cutscenes, teaching myself FamiTracker so I can compose at least a little of the music, and doing as much of the programming as physically possible—but I’m only biting off as much as I can chew. Going into this project with the understanding that it needs to be collaborative is making all the difference in my motivation to work on it, and putting hard limits on the scope of the project is preventing it from growing beyond what I can manage without too much outside help. Once again, it’s all about finding the middle ground between the extremes.

So, being involved in four different Mega Man games released or due to be released in the same year, and overcoming my aversion to creative collaboration? Not a bad way to fulfill a dream.

Fuzz McCoppo: I have you surrounded. Put your hands up and back away from the precarious mountain!