(Editor’s note: This article was originally published in the January 2008 issue of GameCola, back when GameCola was published in a monthly online magazine format.)

It’s our super-special 2007 year-in-review issue, and I’ve decided I’m going to celebrate in the tried-and-true manner that’s worked for sitcoms for decades: Repackaging stuff you’ve already seen in a “best of” episode. So, let’s indulge my slothfulness and take a look back on the games that have been deemed to be at the titular Top of The Heap this year and which ones were the bottom of the barrel. 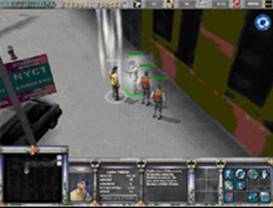 Choosing LB:EF to be the best of a group of videogames you just played is like declaring Jeff Foxwothy to be the funniest member of the Blue Collar Comedy tour. You just want to huff car exhaust after you hear yourself speak the words “Jeff Foxworthy” and “funny” in the same sentence, then you realize that you’d say it again if needed because the other guys are about as funny as juvenile diabetes.

LB:EF is a sub-par RTS that only sets itself apart from other sub-par RTSs by incorporating the kind of misogyny, racism, violence, paranoia and a hostility toward others that only The Bible can provide. Add in a healthy dose of Christian music and you’ve got a game that’s about as fun as playing Command and Conquer while getting a vasectomy sans anesthesia. 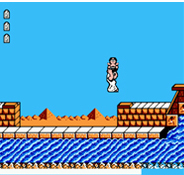 If Left Behind was at the top of this heap, then the game that took the bottom spot would have to be less fun then a companion robot whose idea of a good time is to kick you in the genitals while making you watch “2 Girls 1 Cup.”

This is where the unlicensed NES gem, Bible Adventures, shines. If you want to think of how Bible Adventures plays, think of Super Mario Bros 2. Now take out the fun boss battles. Now remove the good physics, graphics and sound. Take out the replay value. Now make the controls feel weird. Now strip everything left that could be confused for being fun out of Mario 2 and only leave in the ability to pick up turnips and place them somewhere else. This is about all you get out of this set of three games. In Noah’s Ark and David and Goliath, you pick up animals. In Baby Moses, you can pick up and hurl baby Moses at your invincible enemies. This game is arguably worse than the other popular Christian game Don’t Tell Mommy Where the Pastor Touched You. 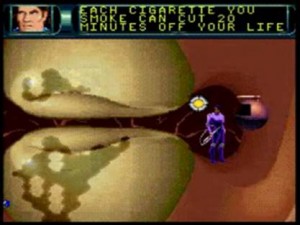 The game is a jumpy, rough-around-the-edges adventure into the human body full of anti-smoking propaganda that presents information about smoking that you’ve probably known since grade school (hint: yes, it causes cancer and yellows fingernails). 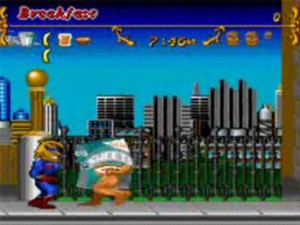 Made for the diabetic set, Captain Novolin is, in theory, a game that combines the fun of a videogame with the reality of diabetes management. In practice, it’s a game that combines some basic diabetes information with the soul-destroying pain of unending defeat as you try to guide the large, clunky, metrosexual breakfast-hater who controls like a burlap sack full of bricks and kittens over the large enemies that require such well-timed jumps that it’s nearly impossible to beat without a degree in quantum physics. 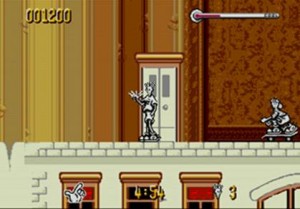 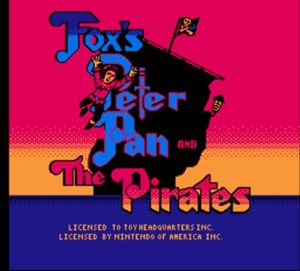 Yes, other by-the-book licensed platformers are all terrible, unimaginative pieces of trash, but they at least have the decency to refrain from shitting in my eyes. Neverland, which is normally depicted as being a colorful dreamland, is primarily lima bean green and blood clot brown and it one of the most boring levels ever. Jump over holes, stab enemies with thumbtack-sword, do more jumping, etc. 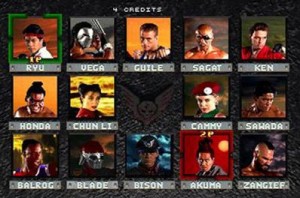 Games based on movies based on games just shouldn’t exist. The end result is like taking the original game, painstakingly removing all the fun from it and drowning it in a vat of horrible.

Just because this game was at the top of this heap doesn’t mean playing it won’t make you want to eat nails. 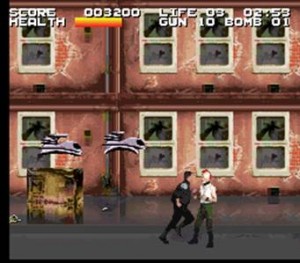 If Chronicles of Riddick: Escape from Butcher Bay taught us anything, it’s that horrible, horrible movies can sometimes spawn some pretty good games. Sometimes the people behind the scenes of the movies and the games work together, spend a good amount of time and money to perfect their product, keeping in mind that the game is an extension of the film and that if the game does well it will look good upon the movie and could bring in new fans for years to come.

Other movie-based games make pretty-looking semi-photorealistic characters that kinda look like the ones from the movie and decide that’s good enough to justify the abysmal, broken gameplay.

Why anybody decided to bring a long-dead cartoon about a cat with a magical bag to the NES is anybody’s guess, but they did and it actually ended up being a pretty fun game. Not a masterpiece by any means, but a reasonably good platformer that’s worth a play if you’ve played out all your Mario and Kirby games.

The Lone Ranger attempted to make something new by combining several genres. RPG, shooter, platformer and even a primitive FPS. It’s gestalt theory in action, since it doesn’t do any of these genres better than many games that came before it, but what makes Lone Ranger fun is that it combines so many different game types.

Sports Games in Which You Kill People
(From issue 6-7)

When Mutant League Football first came out, it made people realize something very important: Murder makes everything more fun. Think about it. Accounting, Hiking, Keno—it’s all more fun when you can dismember those around you. EA was truly ahead of its time in the discovery of this fact and combined murder with football in this first game in the Mutant League series.

If you’re a football fan, you’ll probably enjoy the game, as there are very few changes to the actual rules of the game (outside of bribing refs or killing the opposing team). And if, like me, you’re not a football fan in the least, it’s still worth playing for the new features MLF brings to the table.

Jerry Glanville’s Pigskin Brawl is another violent football game, but this one takes Mutant League Football and drowns it in a vat of molten stupid. Your team consists of what looks to be Vikings, knights in shining armor and homeless people, and you all run around a 17-mile stretch of foresty swamp with a rotten cantaloupe. First team to get the cantaloupe to the other side of the stupidly long forest-swamp gets points.

You could say they took some artistic liberties with the game of football. But then, you could also fill a cardboard box with hamster shit, ping pong balls and lettuce and call it Scrabble but it still isn’t. 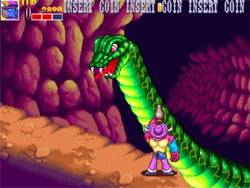 Back in the early ’90s, Konami realized something: You can turn one game into a metric fuckload of games if you just keep buying up licenses and shoehorning the characters and settings onto one fun beat-’em-up. If you’d played the Teenage Mutant Ninja Turtles, Simpsons, X-Men or Bucky O’Hare arcade games, then you’ll know exactly which games got this treatment.

Despite how canned the games may have been, I have to admit, they’re all pretty fun. Wild West C.O.W.boys of Moo Mesa is no exception, though it is one of the weaker games of this type. Nothing thrilling in the way of innovation, but if you feel like mindlessly shooting bad guys for a little while, Moo Mesa will be happy to kill your time for you.

Baby’s Day Off is mainly a puzzle game at its cold, black, joyless heart. You play a baby’s crudely drawn guardian angel and must keep it from being kidnapped by people who are, for reasons unknown, hell-bent on kidnapping it. The game isn’t fun, the graphics are ugly and the sound would drive lesser men to suicide. The fact that this game was once commercially available means that the terrorists have won. 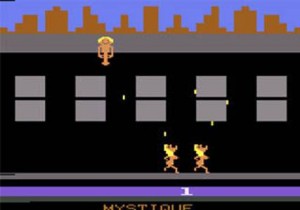 Unfortunately, long-distance jizz-guzzling never caught on as an Olympic event or a videogame genre, but that doesn’t mean we can’t pay tribute to the one that started it all.

For a simplistic Atari 2600 game, Beat ’em and Eat ’em is actually a pretty fun Kaboom! ripoff, and if you’re the type of person who would be amused by making dicks and boobs out of Lego blocks, then all the better.

Burning Desire and Jungle Fever are also the same game. You must save a naked man/woman by urinating/lactating on the fire that is trapping the person you must save.

You don’t need to waste your time evaluating the scoring breakdown for all four of these games. I’ll just give you the overall score these games share and a picture of a cat in a sombrero.

Like The Lone Ranger (see above), Gorf also combines the gameplay of various other games. This one takes a lot from Space Invaders and Galaxian but adds some new stuff into the mix, like one of gaming’s first boss battles. A great combination of classic games and well worth your quarter, if you can find it at the local arcade.

The End plays like a combination of Space Invaders and Galaxian in which you have to defend a pile of blocks. If you let enough blocks get by that the aliens can spell “End,” then it’s game over for you.

Though it is at the bottom of this heap, it still wasn’t a bad game and is worth giving a try.

That’s it—that’s the best and the worst that we’ve seen all year here at Top of The Heap. Let’s see what’s at the Top of Top of the Heap and what was at the Bottom of the Barrel:

Bottom of The Barrel 2007
Bible Adventures 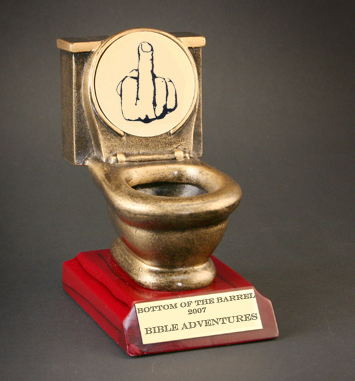 I’ve played a lot of shit this year thanks to GameCola, so to stand out as the shittiest of the shitty is truly an achievement in shitdom. Most games this year got their low scores for making me play a horrible, nearly-unplayable game, but Bible Adventures earned its place at the bottom of the barrel by going two steps further and making me play three horrible, broken games that were all so boring I would have rather gone to church than play them.

Top of Top of The Heap 2007
Mutant League Football

I wouldn’t have guessed that a sports game would be the best game I played all year for Top of the Heap. Is it because Mutant League Football is one of the greatest sports games ever made, or is it because all of its competition was mediocre at best? I say it’s probably a little of both, but either way Mutant League Football still provides plenty of violent football fun years after its release and has earned its place at the Top of Top of the Heap.

After four and a half years, the newest Nancy Drew game is finally here! How does it hold up?