Welcome to GameCola.net! Welcome to “Inside the Guide” or “Fabricated News” or “Minus the Pudding” or “Moddus Operandi” or “testgame.exe” or “Oh, the Humanity!” or “What the Crap?” or…look, you’re welcome already! This here is “Flash Flood,” a column that has been on hiatus way too long for me to waste time on such silly formalities.

Fine, so I unwelcome you to “Flash Flood,” a column dedicated to reviewing Flash games and videogame-related Flash animations. I do extensive research for this column (read: I doodle around on the Internet for hours at a time), and I like to keep things fresh by picking a different theme for each installment. When GameCola was still in its monthly newsletter format, I wrote about potentially addicting Flash games, dinosaurs, Final Fantasy, and Mega Man versus everyone else. This time I’ll be reviewing Flash games…IN SPAAAAACE!

OK, so you got me. I’ll actually be reviewing Flash games from the computer in my bedroom. But let’s just pretend I’m IN SPAAAAACE!

Here’s how my rating system works:

5 = Outstanding! You will love this game. Resistance is futile.

4 = Very good. Totally better than going to Tosche Station to pick up some power converters.

3 = Good. Like the toy surprise in a Fun Meal at Monolith Burger.

2 = Somewhat decent, I guess. Like a stale Fruity Oaty Bar.

1 = Eh, don’t waste your time. Go back to gathering your vespene gas.

0 = Utterly terrible. Even more repulsive than a Silicoid. 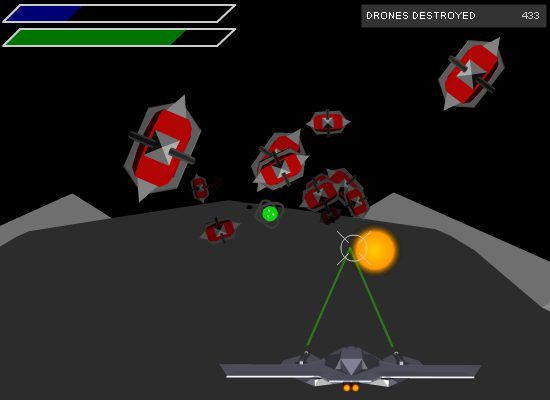 Review: Though the faux 3-D graphics are pleasingly inoffensive and blasting things is initially fun, the fact that this game is a parody of dime-a-dozen space shooters is both a blessing and a curse. On the one hand, the name Generic Space Shooter is funny. On the other hand, navigating through an endless swarm of rectangles in an attempt to collect something like 50 powerups—which, by the way, appear somewhat infrequently, are usually just out of your reach, and can be destroyed by a single errant laser shot—with absolutely no variation in gameplay whatsoever, with no extra lives, and with the grand prize for winning being a “CONGRATULATIONS!” screen that is otherwise indistinguishable from the title screen…uh…makes for a very long sentence.

Verdict: 2/5: Not enough of a parody to excuse the dull gameplay, but too well-designed to be jettisoned out the airlock as junk. 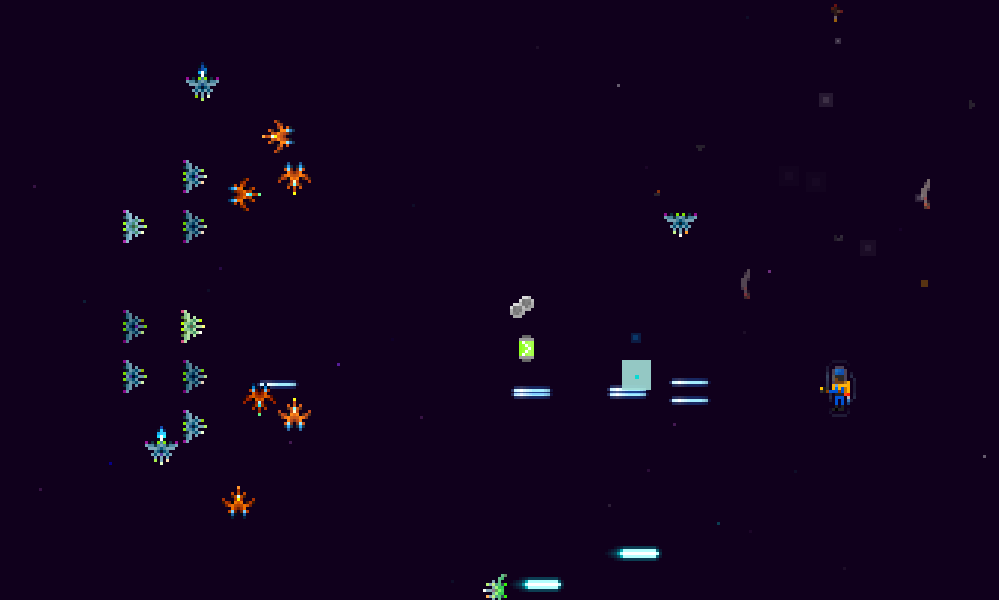 Review: Screenshots don’t do justice to this game. Sure, it looks like just another space shooter, but, in reality…it is. However! Perfect controls, solid gameplay, variety, a charming retro feel, and myriad little touches make this an outstanding space shooter. You can fire in four different directions, regardless of which way you’re moving. You can periodically buy powerups from a cute little alien merchant with the money your enemies drop. Enemies come in a number of different shapes and colors with very different attack patterns. Your teammate (there are two of you—Gamma Bros., remember?) swings by when you’re in trouble and can be seen flying around in the distance when he leaves. Between the music and the backgrounds that change as you progress, this game just oozes atmosphere, which is pretty impressive considering there is no atmosphere out in space.

Verdict: 5/5, except when I remember that I’m no good at space shooters and game over on the first level, in which case it’s a 4/5.

Description: Defend your space station from enemy attack! You specify where to fire (naturally) and how large the blast radius will be (hence the “boom” in the game’s title), but your cannon works on a constantly recharging battery that can only fire big shots when there’s enough energy. Occasional powerups appear that give you a significant advantage over the enemy, such as temporarily unlimited firepower, which allows you to fire willy-nilly all over the battlefield and destroy EVERYTHING (except your own space station, ‘cuz that would be dumb). Between levels you can upgrade your space station into a technological monstrosity that blots out the sun (and your pitiful foes). 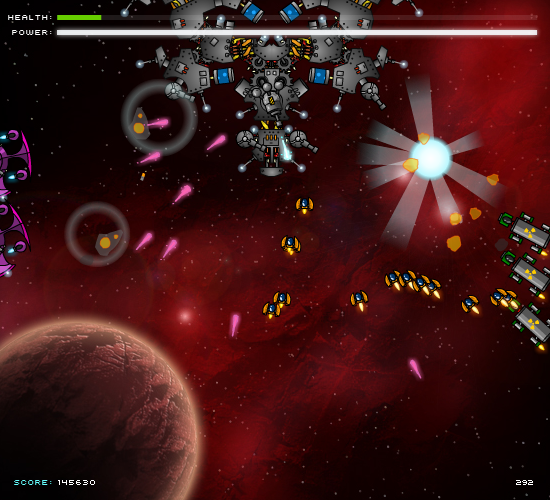 Review: The learning curve is perfect. The amount of customizability makes for a high level of replayability, along with the fact that there’s an endless Survival mode (which technically does end when you fail to survive). The graphics—particularly the lush space vistas in the background—are appealing (at least, to a guy who’s used to playing 8-bit games all day long), and the ambient Epic Space Battle Music sets the mood quite nicely. The game mechanics are brilliant—dragging your mouse to create a blast radius is simple, but prioritizing your targets and carefully judging how big an explosion you can afford to make add a layer of strategy to an action game that is ostensibly about mindlessly blowing everything to smithereens (except your own space station, ‘cuz that would be dumb).

Verdict: 5/5: What’s not to love? Hey, now; don’t go answering that question, or else I’ll start drawing circles around you with my mouse. Big circles.

Description: Fly a spaceship…through space! Collect powerups! Dodge and…actually, you don’t shoot anything at all. Huh. How ’bout that? 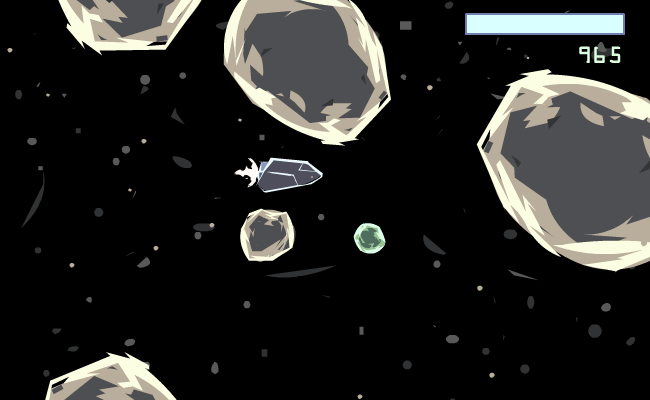 Review: Remember that “Mass Meteor” minigame in Mario Party 6 where you’re swimming through space and dodging all the asteroids? I love that one! Asteroid Miner is essentially the same game, but with 100% fewer Mario characters who should probably be dead from direct exposure to the vacuum of space. Therefore, it’s great. The game sports three difficulty modes and three different playing speeds, catering to people of all different ability levels and masochistic inclinations. Unfortunately, the game is over too quickly. Well, at least when you’re too busy taking screenshots to pay attention to the big HUGE ASTEROID THAT’S COMING RIGHT AT…!!! Aw, phooey.

Verdict: 5/5: Actually, I’m pretty sure the game doesn’t end until you die, which gives Asteroid Miner the potential to be as addictive as Tetris. You’ve heard of Tetris, haven’t you? Therefore, by association, this is a fantastic game.

Description: Yuri the cosmonaut, who apparently attended the same Outer Space Survival course as the Mario Party crew, is leaping through the stars without a spacesuit…or clothes, for that matter. Evidently the Russian space program had some serious budget cuts this year. Help Yuri bounce from one star to the next so that he can stay in the air long enough to assemble a spacesuit without falling to Earth in the attempt. However, given that Yuri’s bare feet can withstand the heat of a star, I seriously doubt he’ll burn up in reentry. 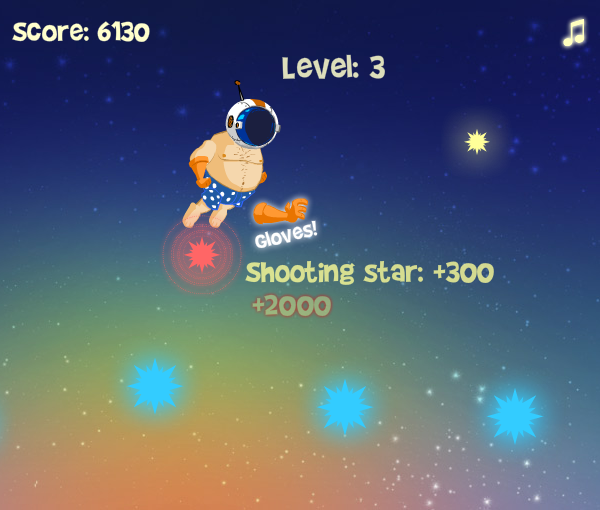 Review: This game is fun for a little while, but it space jumps the space shark pretty quickly once you realize that all you need to do is swing the mouse left and right. Sure, there’s a bit of edge-of-your-seat excitement if you stay in the game long enough for the stars to move faster and become farther apart, but you’ve essentially played the entire game after the first 15 seconds or so. The achievements system doesn’t do much to boost the replayability, either; if you go long enough without dying—which is basically the premise of the game, anyhow—you’ll unlock virtually all the achievements. In other words, they give you achievements for playing the game longer than 15 seconds. Heck, even if you quit after three seconds, you’ll still nab an achievement or two. Sheesh.

Verdict: 2/5: Judging by the score I gave Asteroid Miner, it’s way more fun to avoid running into objects than it is to deliberately run into them.

So it seems that space-related games are really hit-or-miss with me, as I never give out so many 5/5 scores for a theme that isn’t, “Games I Would Give a 5/5.”

If you’ve got any suggestions for themes you’d like to see me cover in future articles, or if there’s a specific Flash game or videogame-related Flash animation you’d like me to review, feel free to e-mail me, and my mail service will ensure that your message gets caught up in the spam filter.

What did you miss while I was gone? A bunch of bad searches.