My mission with this column is simple: to inform people about various Flash games and animations, be they amazing, appallingly atrocious, or astoundingly average. I’m not in it for the money (besides, Paul’s not sharing that precious $2.53 from Google Ads with anyone), nor was my plan to revolutionize the way people write columns…but it seems I’ve been a big influence on some of my fellow GameCola staff writers, as evidenced by the fact that there are now no fewer than three “Flash Flood” clones on this site.

Consider last month’s edition of “Things Zach Rich Demands to See Before He Dies in 2020”: Start off and conclude with a few silly paragraphs, do a bunch of short reviews in the “rapid-fire list of key details followed by a paragraph of description and a picture” style, and you’ve got a flagrant “Flash Flood” clone.

Consider “Myrtle T. Blinkin’s Videogame Previews”: Do a bunch of short reviews that are given a score out of 5 (or more) points, then make the titles link to what’s being discussed, and you’ve got something along the lines of a “Flash Flood” clone. Please note that “Flash Flood” has the integrity to not rate games and videos with scores such as “3 electric llamas out of 5,” because X-Play already called dibs on that gag, and “Flash Flood” is a wholly unique column that in no way resembles or borrows from anything else that has ever existed.

Consider the aptly named “Attack of the Clones” and its series of short reviews connected by an overarching theme. Granted, “Clones” and “Previews” are less of a ripoff than Zach Rich was (oh, wait; I meant, “Zach Rich,” like the column, not the person), and they very well could be clones of “Captain Eric’s Psychic Thumb Feature Presentation,” “Top of the Heap,” or even the last two installments of “Poor Player’s Paradise” (which are not similar in any respect to “Flash Flood”), but I find it rather suspicious that three strikingly similar new columns have sprouted up in the three months that “Flash Flood” has been around.

Are the similarities deliberate? Are these other columnists subconsciously copying my style? Is this just a hilarious misunderstanding and the other columnists have never read “Flash Flood”? Do humans all draw from the same universal repository of ideas without realizing it?

To recap, here is my completely original rating system for the Flash stuff I review:

5 = Amazing. Belongs at the top of the heap.

3 = Good. At least, better than any reference I can make with the name “Myrtle T. Blinkin.”

1 = Not worth watching. Two psychic thumbs down.

0 = Appallingly atrocious. When Zach Rich dies in 2020, this Flash animation will be listed under “Cause of Death.” Either that, or “MOOOOOOOOOOOON PEOPLE.”

In the spirit of these “Flash Flood” knockoffs, this month I’m reviewing five videos inspired by a series that has made a fortune out of copying itself: Final Fantasy. 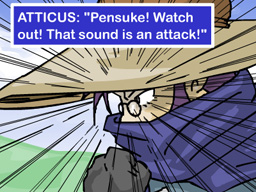 Description: Final Fantasy meets slice-of-life anime in this story about a student who tries to take on his homework with the help of his friends. This was actually a final project for someone’s Japanese class, so there’s Japanese dialogue with English word boxes. Feels a lot like Final Fantasy V with a hint of Final Fantasy Tactics (I blame the music).

Review: I can’t put my finger on exactly why, but I couldn’t find an excuse to stop watching even though the video isn’t all that exciting. I mean, the artwork and voice acting are actually pretty good; there’s a touch of humor; and the plot, while silly and slightly nonsensical, is better than in half the Final Fantasy games I’ve played…but I can’t begin to explain what I officially liked about it. 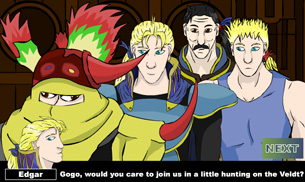 Description: A few characters from Final Fantasy VI work out a plan to unmask the mysterious Gogo. Hilarity ensues. Beware if you haven’t played this particular Final Fantasy: There are spoilers within.

Review: The concept is fun, most of the characters are parodied perfectly, and there are more than a few good laughs to be had—for a while, it’s almost like watching a funny FFVI Saturday morning cartoon (back when Saturday morning cartoons were any good). But the music is choppy, there are moments sprinkled throughout that are incongruously crude, and the disappointing ending veers off into a clump of unrelated and random parodies. Bah!

Verdict: Hey, it just occurred to me that Gogo copies people, so this video fits even more perfectly with this month’s theme! I’m brilliant. I’ll give it a 3/5. 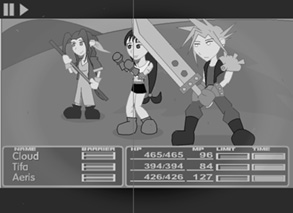 Description: An instructional film (spoofing the ones from the 1950s) about random battles and the consequences thereof, using characters from Final Fantasy VII and a moderately skeevy narrator. Also included is a minigame you can play to unlock additional scenes. I’d like to emphasize that YOU can play it; I gave up.

Review: I’m rather fond of this video. The screwball narrator provides quite a few quotable lines which continue to surface in conversation among my friends from time to time, but the majority of the humor is a little more subtle, sort of that “aw, it’s funny ‘cuz it’s true” kind of humor. Random battles and other aspects of RPGs are actually pretty ridiculous when you think about them too much.

Verdict: 4/5: Great fun, but could be a smidge better. Who pronounces the name as “Tiffa,” anyhow?Tee-fuh. Seriously. 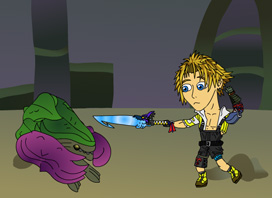 Description: A series of short scenes that parody or at least involve the characters of Final Fantasy X, set to “Otherworld” by Nobuo Uematsu. Two minigames are included, a Blitzball preloader and a bonus game that’s a lot like the Game & Watch game Parachute, which no one has ever played.

Review: Unless you’ve played Final Fantasy X, you will get absolutely nothing out of this video. I mean, stick your head in a paper bag and walk around in circles for a minute instead; don’t waste your time here. If you have played the game, I dunno, maybe you’ll smile a little? I mean, the video ends suddenly, nothing all that interesting happens, the music is harsh, like sandpaper on your ears, and the weird character designs are like sandpaper on your eyes.

Verdict: 1/5: I can’t imagine you’d love it, but you’ll like it more if you’ve played Final Fantasy X or if you have a sandpaper fetish.

Description: Two dudes show off their fancy, nigh-impossible-to-obtain, pointy hats. And some other dudes want them. I think you can tell where this is going.

Review: Does this technically count as Final Fantasy? Hah! I don’t care; I laughed.

Verdict: 3/5: Is it necessary to say anything else? It’s Final Fantasy XI, it’s short, and I laughed. Either you’re gonna watch the video now or you’re not. Sheesh.

Oh, there’s plenty more out there, and I can’t possibly cover so many different games and video series in so little space, so don’t go whining that I left out Final Fantasy II (IV)-2 DS Tactics Advance: Crystal Dawn of the Advent Toddlers, or whatever. FFVI, VII, and X get all the video love, and 8-Bit Theater’s influence has been so great that you will never, ever see a straight-up video of the original Final Fantasy in which, among other things, White Mage is not a girl.

As for the other games, the few videos out there either end abruptly or they’re just not worth watching, so if you were playing through The Final Fantasy Legend in the hopes that there would be a funny video to make the experience worth it, you’d best stop playing now.

Remember, no matter how many clones you may see, “Flash Flood” came first and blazed its own trails without following in the footsteps of others. Until next time, Sodies—This has been Nathaniel, and I am awesomer than you. Game on, my brothas and sistas.

My GameCola Podcast senses are tingling...